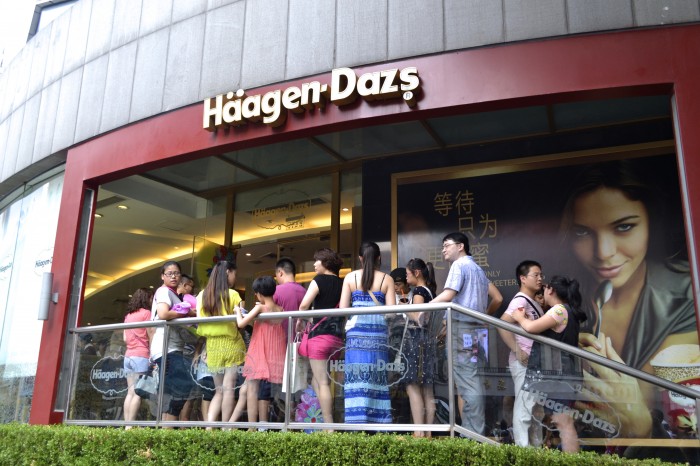 Young Chinese women are under immense pressure to have a baby the moment they get married. For many, the pressure comes from the grandparents who are only allowed one grandchild under the One Child Policy. Society also plays a role with constant questions and comparisons. I joke that a few of the English teachers at my school had a pregnancy pact, because their children are all about the same age. “Where you all pregnant together?!”, I once asked. “Oh yeah, I guess we were”, they replied. It was no big deal. They all got married at the right age and had babies straight away. But what happens if having a baby isn’t quite so easy?

Last Tuesday morning I received a text from Lora, “All the English teachers will have buffet this evening. Would you wait at the school gate at 4:30pm?” Okay? Thanks for the couple-hour heads up Lora.

In the afternoon while I was skyping my parents I got another text. “We may start a little earlier for it is rush hour. Can you come to the office at about 4:00. Miss Lin the teacher sitting in your row will drive you to buffet.” 20 minutes later, before I could even respond , I got another text. “Sorry Mr. Wang will drive you because Miss Lin decided not to drive there.” Couldn’t she have just told me when I was in the office? Does it matter who drives me? Apparently it’s a huge deal.

Eventually at 4:00 we all left for the restaurant and, as promised, Mr. Wang drove me, along with another teacher Catherine. As we approached the restaurant Catherine said “I wonder if there’s ice cream here?! My husband won’t let me eat it at home so I have to sneak it”.

At first I thought that she would say it had something to do with him not wanting her to gain weight, but her answer surprised me. “The cold foods are bad for a baby”.

Of course, the “baby”, or should I say lack of baby. Catherine told me earlier this year that she was only teaching one class because she had an “abortion” over the summer. Eventually I found out that she meant was miscarriage. It was a bit awkward having that conversation the first time I actually hung out with her, but I find Catherine pretty relatable because she’s one of the only female English teachers that doesn’t have kids, and her English is pretty good.

Now about this ice cream situation; Chinese people believe that cold stuff is bad for you. They only drink warm water and will not let you touch anything cold if you’ve been sick. While I’ve gotten used to, and actually enjoy warm water, sometimes I think they take this “cold” thing too far.

“Not only will they not let me eat ice cream” she said, “My mother-in-law won’t even let me eat crabs!!”. While that might seem weird to you guys back home, crab is a big deal in Ningbo. “They even make me eat the medicine to help me have a baby.”

As the conversation continued, Catherine explained that she was under a lot of pressure to pop out a baby for her family, mainly her husband’s family. With the One Child Policy, she is their only hope for a grandchild. While I know that if for some reason I can’t have kids there’s always modern medicine or adoption, I know that it’s much less common in China. It seemed crazy to me that her family was imposing dietary restrictions on her before she is even pregnant!

While I feel really bad for Catherine and the intense amount of pressure she’s under, I felt much better after watching her stuff her face with crab and ice cream at the buffet. You go girl. Eat what you want.