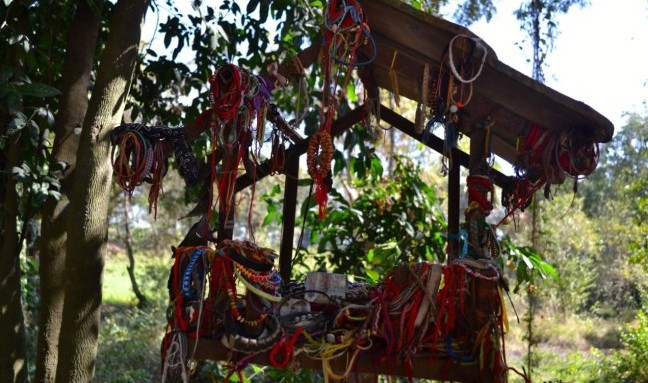 While I may have put you off of Phnom Penh by talking about all my friends getting robbed there, a visit to Cambodia’s capital is a must for any visitor to the country. 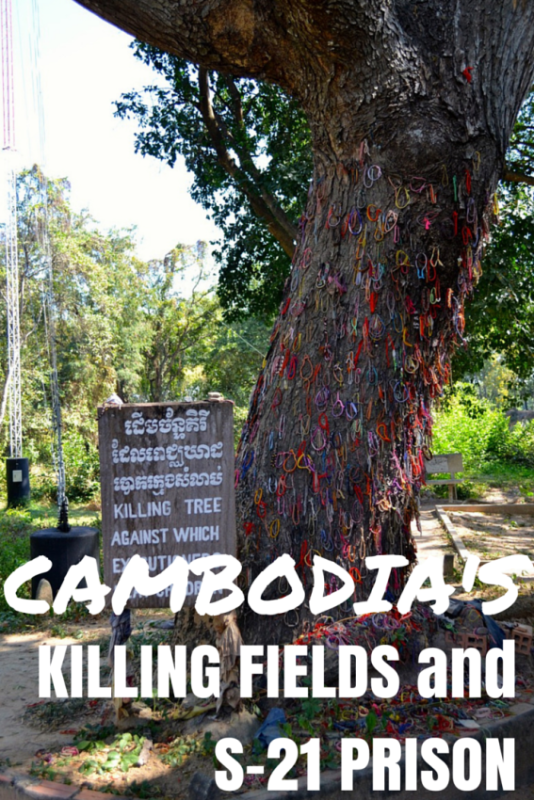 It’s an odd feeling, visiting a country that has experienced genocide so recently. Atrocities that occurred only a few decades ago are still fresh in the mind of every Cambodian over the age of 40. Making a visit to the Killing Fields and S-21 are truly the only way to really understand Cambodia: its violent past and promising future.

A Bit of History

Khmer Rouge, the ruling party from 1975 to 1979, completely devastated the country of Cambodia and led to the death of over 2 million people. Its insistence on self-sufficiency in an agricultural communist society led to widespread famine. The government also conducted a genocide against the educated city people suspected of “free market activities”.

With the promise of equality, dictator Pol Pot convinced the masses that the poor would be taken care of, not too unlike Mao’s China and the Soviet Union. Masses of poor peasants rallied around the new government, along with lower class city dwellers.

Unfortunately, for those in the cities, the Khmer Rouge had a different kind of “equality” in mind. Every single resident of Phnom Penh was evacuated and sent to forced labor camps. This included not only all doctors, teachers and businessmen, but also poor city dwellers. Schools, hospitals and factories were closed, money and religion were abolished, and anyone with an education was systematically murdered. 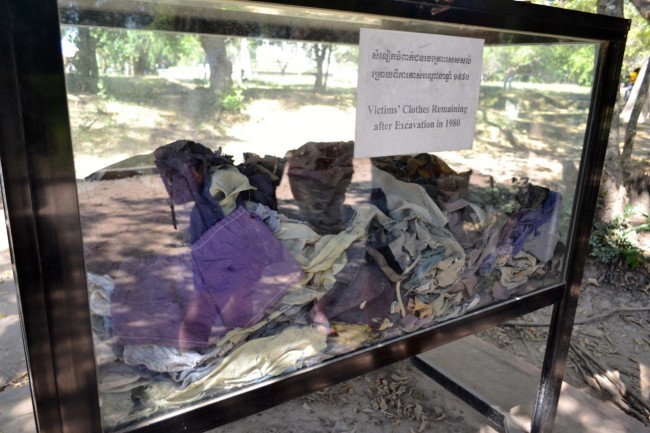 Fragments of bone and cloth collected at the Killing Fields

The uneducated members of the countryside were taught that the rich city folk are leeches on society, purposely withholding resources to make their lives miserable. Families were separated, living in gendered communes. Children were taken to be educated in the doctrine of the Khmer Rouge; often serving as officers and inflicting torture and executions.

The forced labor camps were not the last stop for the city folk and educated members of society. Many were sent to S-21, a school turned torture prison. They were kept in miserably small cells and tortured until they admitted to crimes they didn’t commit. Once a confession was made, it was on to the Killing Fields.

Many others were sent directly to the Killing Fields. It was here that almost 3 million people lost their lives. Prisoners were kept blindfolded in a shed that contained a loud generator. The camps also blasted music, to disorient the prisoners and mask any noise. One-by-one they were taken to the edge of a large pit and bludgeoned to death with a variety of tools such as sticks, hatchets and metal rods. This helped preserve resources and bullets.

Eventually this reign of terror ended when Vietnam captured Phnom Penh in 1979. 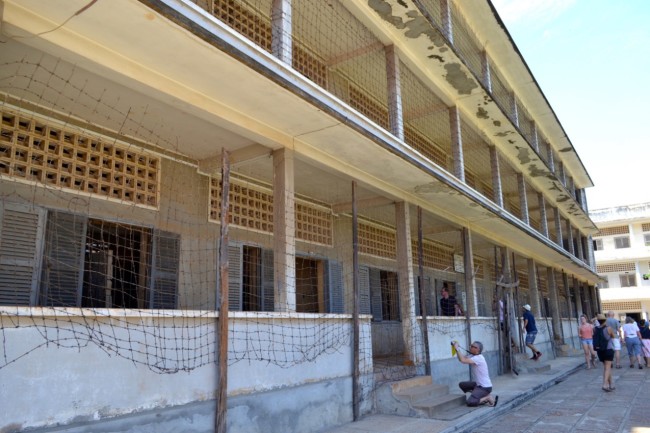 S-21, located in the city, is an equally harrowing and confusing experience. With little to no information and signs, I didn’t quite know what I was seeing. My first impression was that it looked strikingly similar to the primary school I taught at in China last year. It wasn’t until later on in the visit that I learned S-21 was an elementary school.

On your visit you’ll see larger rooms used for torture and “special” prisoners, and smaller wooden or brick cells for the rest of the inmates. There are wooden beds with shackles, torture devices and thousands of mug shot photos of S-21’s victims. It was surreal staring at the faces of young men, women and children. Especially knowing that out of the 17,000 imprisoned, only twelve survived. 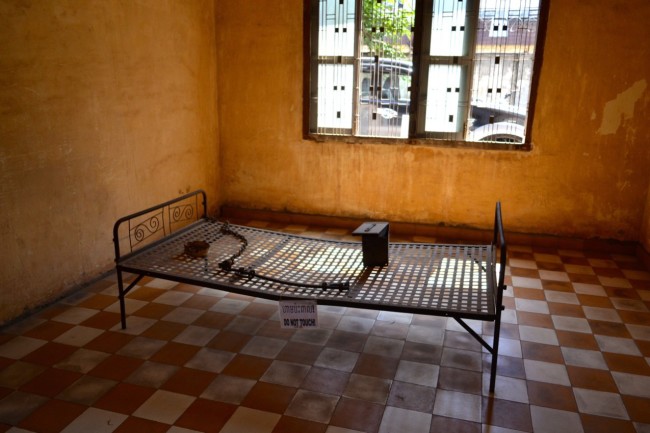 A large cell for special prisoners and torture

Due to the lack of signage, I would suggest getting a tour for S-21. The few people I know who purchased a guided tour at the gate got a lot more from their visit than I did. If you don’t want to do a tour, do a bit of reading before you arrive.

For me, the most enlightening (and frightening) aspect of S-21 was the film. This is shown on the top floor of the last building you’ll enter. The movie is long, and you don’t have to stay for all of it, but consider watching for at least fifteen minutes. 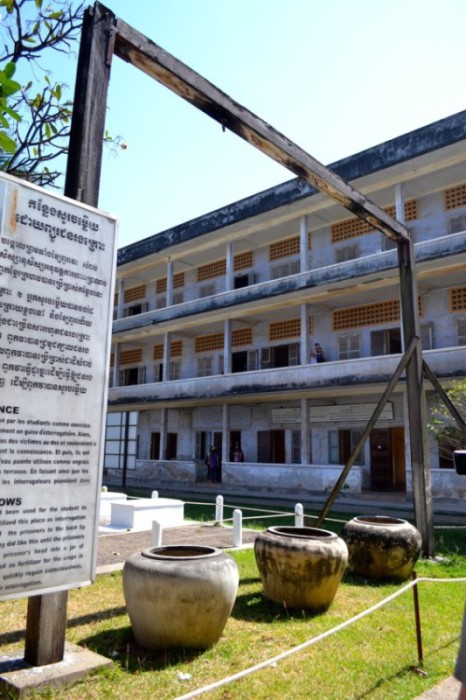 The film shows interviews with men who were child prison guards at S-21, as well as one of the only remaining survivors of the prison. The movie was extremely off-putting because the now adult guards talked about their past without a hint of regret. They answered every question without hesitation, giving great detail about how they used to torture prisoners as preteens. Many of the guards even did passionate reenactments of how they used to treat prisoners, laughing and joking with the interviewer!

It was a truly odd experience that I suggest you all see for yourselves. 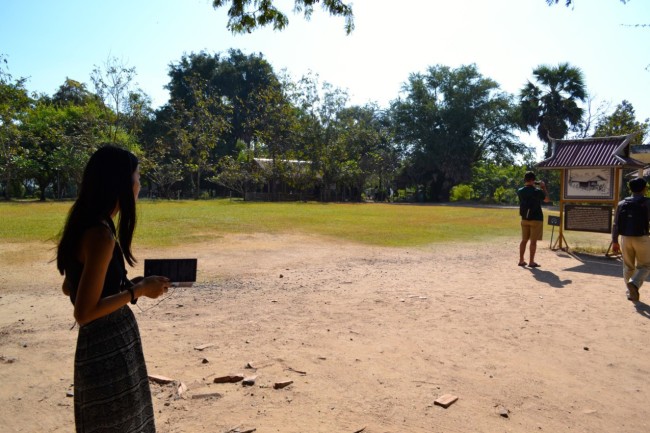 Arriving at the Killing Fields

After a long ride on a bumpy dirt road, I arrived at what I can only describe to be a beautiful park. The Killing Fields were much smaller than I expected. I guess I didn’t think that an atrocity of such an extent could be executed in such a small space. I was picturing a large desolate field, and was shocked by the small compound filled with trees, flowers and a temple. 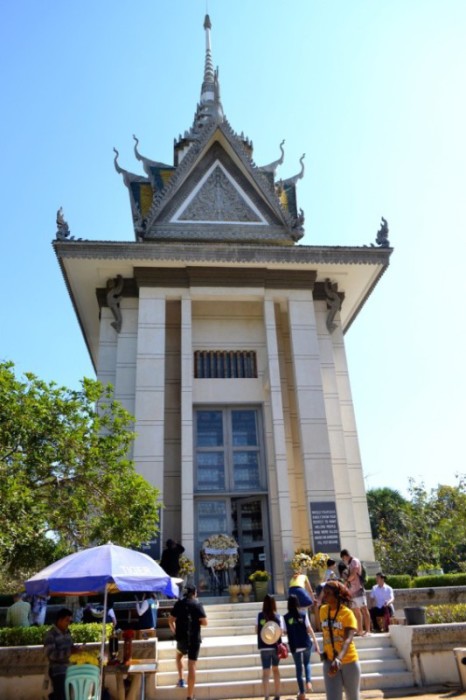 Once entering the site, you’ll receive an audio headset, which will tell you the story of the space. I thought the headset was extremely well done, and I appreciated the opportunity to sit by myself and listen to the information at my own pace. In addition to teaching the history, the audio tape also contains many stories from survivors, as well as a beautiful symphony piece that you can admire while contemplating what you’ve seen.

Towards the beginning, you won’t see much, just empty places where warehouses and prison sheds once stood. Eventually, you’ll make it to the excavated pits, where you can see fragments of bone and cloth sticking up from the dirt. Bone can even be found on the walking path, which they urge you to try not to step on. When it rains, volunteers collect the bone, cloth and teeth that rise up from the dirt, and place them in boxes to be viewed by the public. 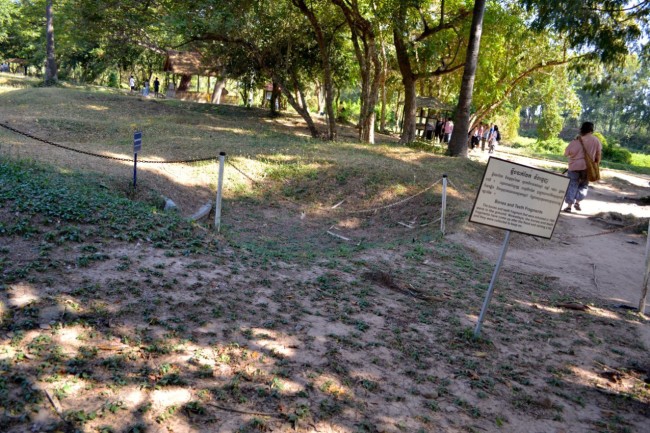 “Please don’t step on the bones”

One of the more shocking aspects of the Killing Fields were that many teeth, bone and cloth fragments were placed on top of the boxes. You could easily reach out and touch one of the victim’s jaw bones or hold a tooth if you really wanted to. Obviously, none of the tourists did this, but it shocked me that they were just sitting there.

Another harrowing experience was seeing the Killing Tree. This tree, covered in prayer bracelets, was used to murder babies. Mothers would watch as they smashed babies against the tree and threw them into the pit, where the mothers would join shortly after. 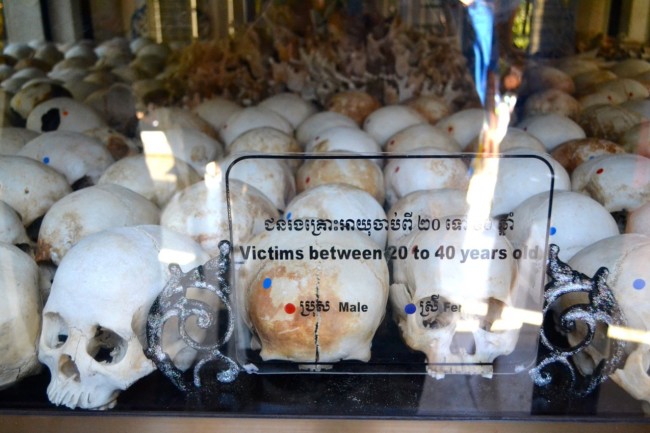 Sculls in the temple

Finally, you’ll visit the temple where you can see the sculls of many of the victims separated by age. The temple is meant to serve as a monument to those who have passed at the Killing Fields, and serve as a reminder of the horrors of mankind.

While I wasn’t sure about how I felt taking pictures in these places, both the Killing Fields and S-21 encourage you to take photos of everything to show these atrocities to the world, and bring attention to the horrors that happened in their country. I decided to take a few snapshots for this post, so that those of you who don’t have the opportunity to visit Cambodia can see for yourself.

A picture is worth a thousand words. I can try to spread what I’ve learned through my blog and writing, but to truly understand what happened to Cambodia during the Khmer Rouge, you’ll have to visit these places yourself. 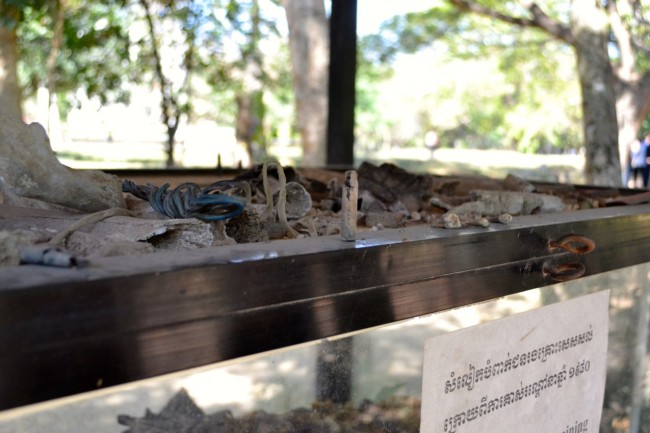 You could reach out and touch it if you wanted to

How to get there

For those of you who want to visit these places yourself, you can hire a tuk tuk for the day. I hired one through my hostel, but you may be able to get a better price if you find one elsewhere. I think my friend and I paid $15 for the day. 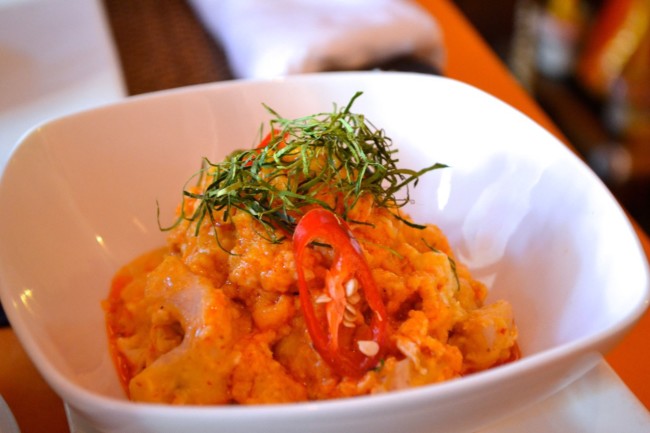 Before or after S-21 we had the opportunity to eat lunch at “Tuk Tuk Café”, where my driver obviously made a commission. While I was a little annoyed, I was completely starving after visiting S-21 (I probably should have eaten before), so we decided to eat there. The restaurant was filled with tourists but wasn’t too overpriced and served some of the best food I had in Cambodia, which was a pleasant surprise.

If you’re visiting Cambodia, be sure to check out my 48 Hours in Phnom Penh itinerary, which I believe is more than enough to see the city. Also be sure to read my story of how my friend got robbed twice in Phnom Penh to be sure it doesn’t happen to you. 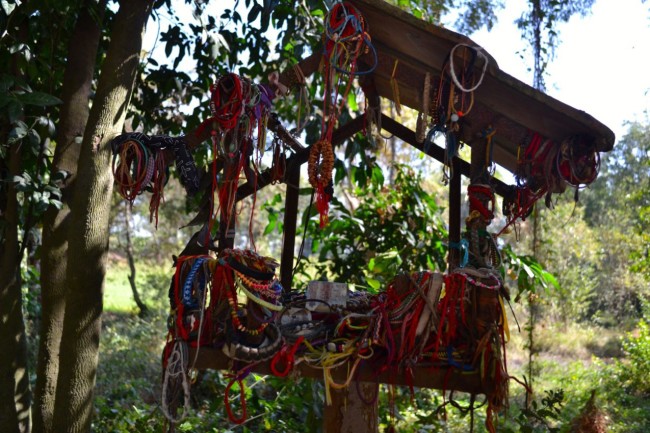 Have you ever visited the Killing Fields or any other genocide or prison museum? What did you think and how did you feel?