I’ve been studying at the University of Nottingham in China for about two months now, so I thought it was about time I talk about the dorm I’ll be living in for a year. 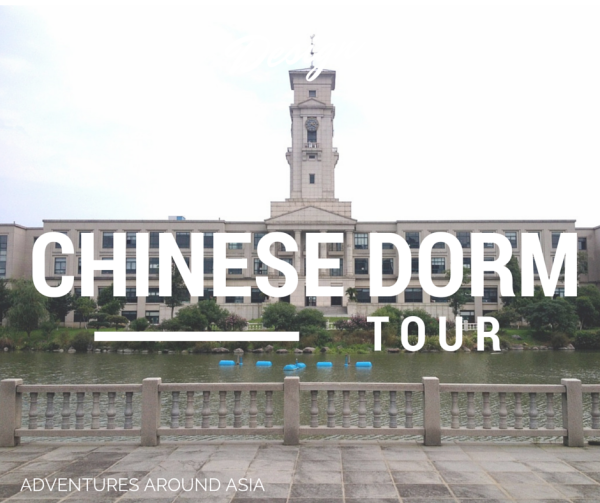 The University of Nottingham Ningbo China

If you remember my story about my first week of grad school, originally, I was supposed to live in building 18, a completely international dorm with four single rooms to an apartment, complete with a kitchen. When I arrived on campus, the dorm staff informed me that they were allowing a group of master’s students to stay an extra month while finishing their dissertations, thereby displacing me! They then told me I could move to a different building for a month, and then move back to building 18 in October. Really?? I had already paid for building 18! I had an email confirmation!!

Welcome to my humble abode

There was nothing to do but move to building 20, which is almost exactly the same as building 18, but half-foreign, half-Chinese and without kitchen appliances or a tv. By kitchen appliances I mean a large refrigerator, hot plate, rice cooker and pots and pans. The room itself is pretty nice, by dorm-standards. We each have a large single bedroom to ourselves, with a bed, wardrobe, and a large desk with many drawers and shelves. The bed even has a little pad, so it’s not insanely uncomfortable like my bed last year! 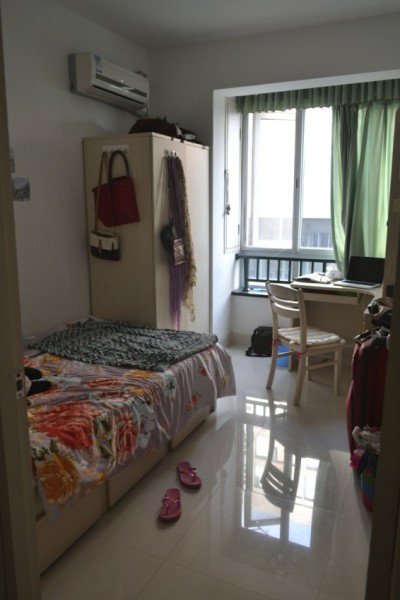 We have a large living room area with tables and chairs, but no couch, unfortunately. My roommates and I bought cushions to put on the chairs to make them a bit more comfortable, but I still really wish we had a couch to snuggle on. One of the great things about the other dorm (the one I was supposed to be in), is that it has been an international student dorm for a long time, and many people have left couches and rugs, making the place seem much more homey.

A lot of my friends have fully decorated apartments with cooking racks, bookcases and much more. Most people in my building can’t be bothered to spend that kind of money for just a year. 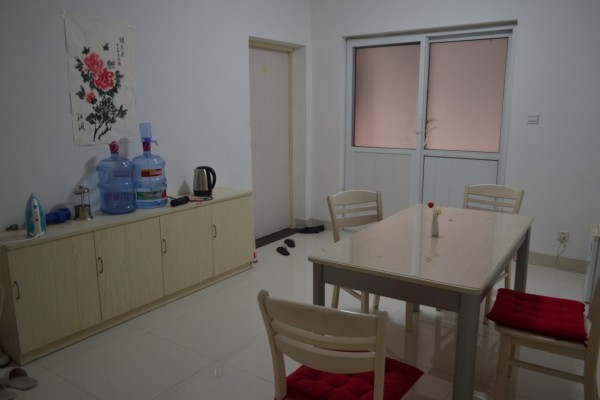 At least we have art on the walls?

We also have a “washing room” with two bathroom sinks and one larger kitchen sink. Down the hall we have two toilets. Unfortunately, one is a squat toilet (why???). Chinese people don’t even use squat toilets in their own homes anymore, so I have no idea why they thought it would be a good idea to give us one. We barely use it, but it’s there.

Finally, we have a shower room. The shower is actually pretty good, and has a rack to hang our clothes and towels. It’s nice to be able to take a shower without worrying about getting the bathroom floor all wet. To save money on water and electricity we only turn our water heater (in the washing room) on when we’re about to take a shower, but we have to wait a solid half an hour for it to heat up.

Because of this, I often wake up 15 minutes or so before I actually want to get up, turn the water heater on, and then go back to bed for another 20 minutes. This usually works, unless one of my roommates decide to hop in the shower while I’m sleeping!! Then I have to start all over again… Or I just give up and don’t take a shower that morning.

Of course it was super dirty…

While our apartments are nice and spacious, they were extremely dirty when we moved in. Of course, Chinese people never clean apartments in between tenants, and dorms are no exception. Coming from a family that works in real-estate, I know better than almost anyone how important it is to clean apartments in-between residents. Keeping things clean makes sure the place stays newer longer, and you can get more money out of the building and your investment. Our white walls are filthy and paint-chipped. Just a simple paint job and a light cleaning would do the trick! But of course, that’s way too much to expect in China.

Our building is also very shoddily built, which is also typical for most Chinese buildings. The walls are chipping and breaking off in some parts, and there is absolutely zero insulation. I would say the walls are concrete, but they’re obviously not since they are falling apart. I’m going to guess that it’s some sort of cheaper alternative? The floors are hard tile, or brick in some places, which not only means we have to sweep them almost every day, it also doesn’t do anything to make the place warmer! 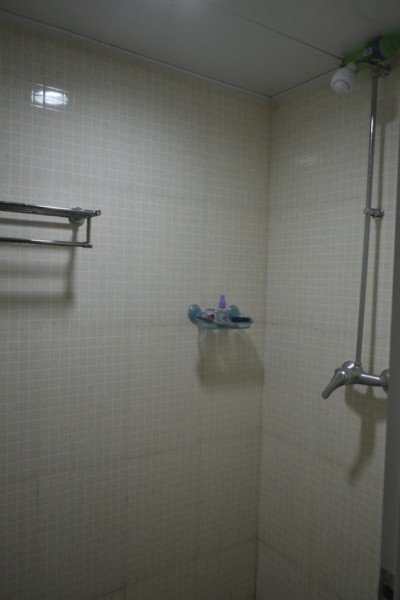 Note the sprite bottle. Not sure what it’s for but I’m afraid to move it

With the way buildings in Ningbo are designed, you’d think we live in Arizona! Unfortunately, we don’t live in Arizona, we live in a place that gets cold enough to go below freezing, and we’re not allowed central heating due to China’s environmental laws. A properly insulated building would definitely help matters a lot more, but that’s a bit too much to expect for China.

Most buildings in China are very poorly constructed, and easily demolished. When a building gets old and run down (usually within 10-20 years), it is torn down and a newer (also poorly constructed and poorly cared for) building is put in its place. Let’s just say my roommates and I are going to buy radiators and electric blankets this weekend. 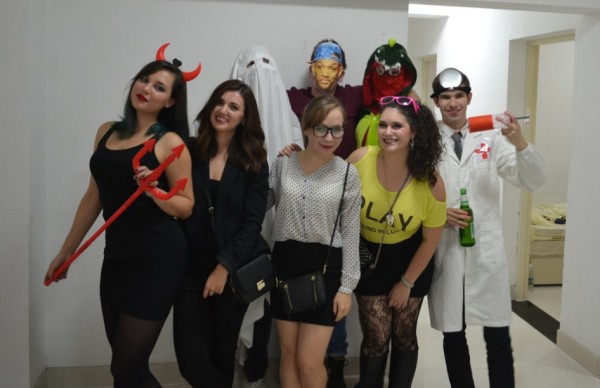 Getting ready for Halloween with my dorm friends!

To sum it up, my dorm is pretty nice for China, and I love having my own room! I get the privacy I need, while being surrounded by friends. I also have a somewhat comfortable bed, which is a big deal. Did I mention we have a balcony??? Granted, we only use it to hang our clothes.

Other perks include a laundry room downstairs. We have four crappy washers that cost 4 yuan (60 cents) per load, and one dryer that I have yet to use. I usually hang up my clothes on the balcony I mentioned, or on a bar in front of the curtain rod on my window. I find my clothes dry faster this way because my bedroom gets more sun. 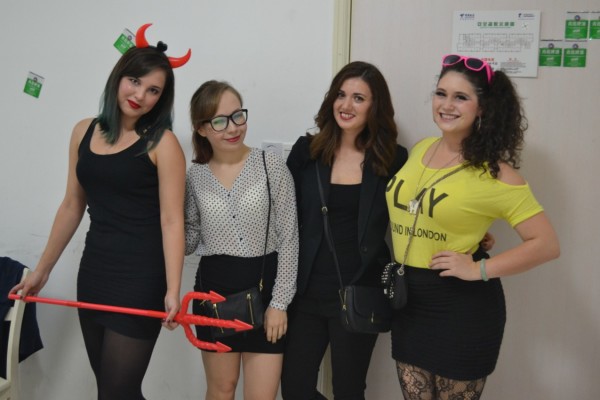 Russia, Ukraine and USA: foreign policy at its finest

After a year of lonely apartment living, I kind of missed living in a dorm. I’m surrounded by all of my friends, and it’s so easy to be social. The only thing I miss about my old apartment is the kitchen! We rented a mini fridge and bought a rice cooker, but the refrigerator is much too small to hold groceries. I’m thinking about investing in a hot plate and wok because, let’s face it, I’m probably never leaving China and I want to be able to cook stir fry.

I also have really cool neighbors

This is my friend Will Smith

What do you think?? I was pleasantly surprised by this year’s accommodations, but my standards are a bit low…

5 comments on “A Chinese Dorm Tour”