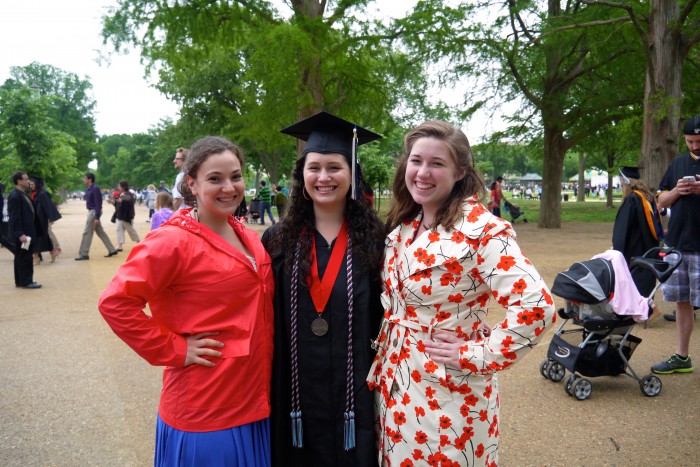 I finally finished my thesis (the day before it was due- a major accomplishment on my part). However, I wasn’t quite done after my thesis; as soon as I clicked submit I spent the next five hours taking my TEFL class (teaching English as a foreign language), which is required for me to qualify as a “foreign expert” and get a work visa to teach in China. Normally you have to take the TEFL class in China, but we were granted a 40 hour online version with quizzes after each section and a giant test at the end. It kind of reminded me of the online class I had to take to become a real estate agent in Washington (yes I have my real estate license). The only problem: I was given two weeks to do this class and take the test during finals, and it was all due the day of my graduation. With my parents coming into town I wanted to finish it as soon as possible, so I basically spent every waking moment for the next two days taking the class and studying for the test. Whooo senior week! I eventually finished the test two days later. I’m a robot, it’s fine. Fingers crossed that I pass the test because otherwise I’m pretty much… screwed.

To sum it up, graduation was great but very hectic. I had to ship all of my things back to Seattle, show my parents around DC and say goodbye to all of my friends that I may or may not ever see again. It’s hard to see your life change so drastically. Kerry Washington was our commencement speaker on the National Mall, which was great, minus the rain. It  felt somewhat surreal, graduating from college. There’s much less buildup than in high school, and I had been so stressed packing, TEFLing and studying that I hadn’t really thought about saying goodbye. DC has been my home for the last four years, and even if I do go back after China, there’s no guarantee that any of my friends will still be there. While many of my fellow graduates were comforted by the fact that they can visit one another, I live in Seattle and I’m moving to China… indefinitely.

After graduation I went on a cruise with my family to Turks and Caicos and the Bahamas which was really fun. First went to Miami for a day, where we visited the Everglades where I saw four wild Alligators and got to hold a captive baby! I also ate alligator and frog legs for the first time (alligator is way better). I had never been on a cruise before, so it was definitely an interesting experience for a person that is used to staying in dumpy Chinese hostels. The islands we visited were amazing. I got to ride a jet ski for the first time, kiss a stingray, and pet a wild shark while snorkeling! If you’d like to see some of my photos from the trip, check out my photography blog Richelle Gamlam Photography.

I just arrived home late last night and there are so many things to do! I’m mainly worried about the visa situation. I need 20 working days to get a visa and I’m leaving for China in about 25 working days… I’m still waiting on my proof of graduation from GW and my TEFL results before they can start the paperwork. I tried asking the AYC Shanghai office if I could pay the difference to have my visa expedited, but I don’t think the Chinese woman at the office knew what expedited meant… her email basically made no sense. None of this would be a problem if I wasn’t arriving in China two months early, but I guess worst case scenario I go to China on a tourist visa and then go to Hong Kong to update my visa when the paperwork is ready. While Hong Kong is a fantastic city, it is also very expensive, as you saw in my post Spring Break: Hong Kong and Macau. I may go to Shenzhen and take the subway to Hong Kong because flights and hostels are much cheaper within Mainland China.

Aside from TEFL results and visa applications, I am also worried that I will not know what city I’m living in until after I arrive in China. Why is this a problem you ask? Because I need to know whether to pack parkas or flip-flops! The northern cities like Beijing can get very cold in the winter, while the southern cities like Xiamen and Shenzhen stay sunny year round. In addition to this dilemma… I kind of just want to know where I’ll be! Everyone keeps asking me where in the vast country I will be living next year, and I honestly have no idea.

So those are my problems. I guess that’s what I get for arriving to China two months early. I would apologize for complaining but you’ll get two more months of awesome posts and pictures out of it, plus (maybe) a trip to Tibet??!!

On the bright side, I am one of the few people who I know that has graduated college with a job. Granted, I did have to outsource myself to China… Not that I wanted to be anywhere else anyway.