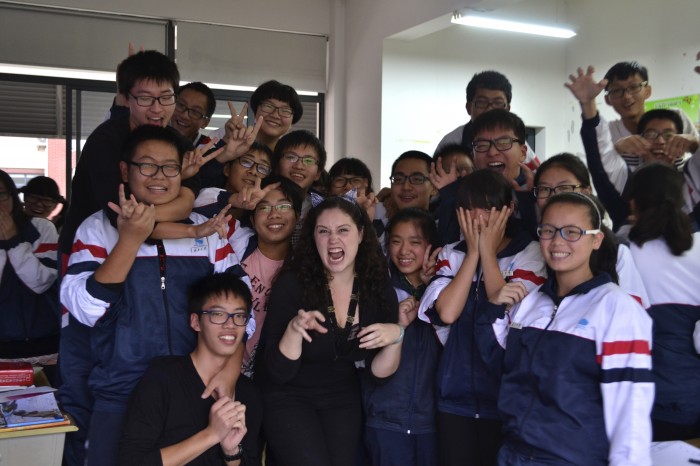 You never realize how much you miss American holidays and traditions until you ship yourself to a country that has never heard of them.

Halloween is such a fun and interesting holiday, I wanted to bring it to all of my students… over 700 of them at least.

Every week I alternate between teaching Senior 1 (high school sophomores) and Senior 2 (high school juniors). Halloween fell on a Senior 1 week, so I decided that all 10 Senior 1 classes, roughly 450 students, would get to learn about Halloween in a week-long extravaganza! I decided to dress up in a new costume every day, as well as throw candy at… I mean give candy to my students.

The costumes caused quite a stir around campus, not that I don’t get enough attention as it is. That’s the one downside of living on-campus: I can never be incognito. I told many of the teachers I’d be dressing up, but a lot of the students had no idea why I was walking around dressed like a weirdo. Well… hopefully someone told them. When students screamed things at me around campus like “OH WHOAH!!!” or “HELLO TEACHER!” or “SO BEAUTIFUL!!”, instead of stating my typical “Good morning!” or “Hello!”, I would scream “HAPPY HALLOWEEN!!!” to which I would get a quizzical “shenme?!!”, I’d then respond with “Wanshengjie!”, which means ‘Halloween’ in Chinese. Most responded with a confused “oh…” but I could tell that they still didn’t get why I was wearing a costume. Awkward.

Here is a break-down of my costumes:

Day 1: I wore a traditional Tibetan dress I bought this summer with a high bun and chopsticks in my hair

Day 3: black cat with home-made cat ears by taping paper I colored with a black pen to a dark headband

Day 4: Panda- I wore a black and white sweater and black leggings, put my hair in two high buns and wore my panda sleep mask on my head

Day 5: some sort of late-80’s dressed up girl with a lot of black and neon. I even wore my “PLAY Liround in London” shirt with shoulder cutouts that I was given on Sports Day by some of the students when I pointed out that I thought their dance uniform’s misspelled English shirt was hilarious

For my Senior 1 students, I had them do a Halloween brainstorm writing activity. While most students came up with things like: October 31st, candy, ghosts and pumpkins, I also got a lot of interesting responses like “cosplay” instead of “costume” and “pumpkin lights” instead of “jack o’lanterns”. The best was when students combined Halloween with other holidays, writing things like “turkey”, and “search for eggs”. After our brainstorm, I gave them a brief lesson on Halloween history and culture, and we all watched “This is Halloween” from the nightmare before Christmas, as well as Michael Jackson’s 5-minute Thriller video. If there’s one thing I learned about Chinese high schoolers it’s that they LOVE Michael Jackson.

I continued the Halloween theme by reading a scary story to my speech elective students, and showing 40 minutes of the Nightmare Before Christmas to both my Western Culture through Music and Media classes.

Since almost 2/3 of the school wouldn’t get a lesson from me for Halloween, I volunteered to do a quick Halloween lesson and show either the Nightmare Before Christmas or Hocus Pocus in one of the larger music classrooms for any interested students. I mentioned it to Aaron, one of the English teachers, and he told me we might have to find a bigger room because all of the students would want to go. Apparently they LOVE my class blush; However, when we brought it up with the administration, we were immediately shut down because the students “have to study”. Really? They have their midterms this week, and needed their two-hour study period Thursday night. In America, if midterms were the week after Halloween, we would go to the movie screening Halloween night and merely study on the weekend. But in China, they can’t trust the students to study and do homework at home; they must be micro managed and forced to do their homework. Isn’t that what parents are for? Kidding. But really, it was a bit of a culture shock to be turned down for promoting an optional English language and cultural learning activity on my own time for free.

For the primary school kids, I taught them some Halloween vocabulary and culture, had them sing a song about a spider, helped them trace their hands to make spider and ghost crafts, and showed them “This is Halloween” (again), which they loved! After my second class at the primary school, all of the students surrounded me asking me to sign their English books. Since I only teach each class at the school once as a sort of guest teacher, the kids always get very excited when I teach. Sometimes they want to individually ask me basic questions in English like “how are you?”, other times they all try to give me awkward handshakes. This time, however, every student wanted my autograph and they surrounded me like a mob! I yelled at them in Chinese to form a line, and began signing all 50 of their books. After a while I realized that I must’ve signed about 70 or so books, and looked up to see a line snaking out into the hallway! “Where are you all coming from?!!”, I gasped in English. Apparently I had begun signing a whole second class’-worth of books. Eventually the driver and another teacher pulled the kids off me and I headed back home with a sore wrist and ringing ears.

Since my tutoring kids are roughly the same age with slightly better English, I planned on re-using the same lesson with a few extra activities like bobbing for apples since the class is an hour instead of 40 minutes. However, when I got to the classroom I realized I had accidentally deleted the Powerpoint I needed to make room for the Nightmare Before Christmas movie. AHHHH! I showed them the “This is Halloween” song (for the 16th time… literally), and tried to brainstorm. Then it hit me. PICTIONARY! I drew pictures of all of the vocab words on the board with the English word written underneath, and let students take turns drawing words that I whispered to them. Eventually I made it harder by erasing all of the pictures so that the students would have to think of the word from memory. They did a great job and had a lot of fun with it. One kid even combined two words and drew a jack o’lantern monster! Eventually I had to stop the game to teach them about some Halloween history and culture.

I even did a trick or treating activity where I told them I would stand outside the classroom, and they would have to knock on the door and “trick or treat” in small groups. I stood outside in the dark and waited for a minute, then I heard a furry of little knocks. I opened the door to see five of them who yelled “TRICK OR TREAT!!”, I then handed out candy and told the other five that their turn was next. A few seconds later I heard a few rapid knocks and giggles and opened the door to all ten of them. TRICK OR TREAT!!!!! I tried to remember which ones I had already given candy to, because I only bought enough suckers for each kid in my class to have one. Little liars! After trick or treating, I had them bob for apples while we watched the 13-minute Thriller music video. While the kids loved bobbing for apples, not one of them could actually get an apple with their mouth because they didn’t want to stick their faces in the water, but I had fun watching them try!

After my tutoring lesson on Friday, I packed a small backpack and headed out the door to the city for the weekend where I would crash with one of the AYC teachers. I poured a glass of 24 kuai wine into a thermos and hailed a cab in full costume. It was already after 8pm at this point, and I couldn’t find a cab anywhere! (The problems of living on a highway in the middle of nowhere) Eventually I was able to hail an already-full cab, which is technically illegal, but he was heading in my direction so it worked out for both of us. There were two men in the cab, and I struck up a conversation with one in the backseat who told me he was from Shandong, and that he worked near my school. We eventually pulled up at the train station, which is on the way to the city..ish. I asked the young man where he was going, and he said “home to meet my family”. As we pulled up, the man in the front seat hopped out and we drove away. “Wait… you guys aren’t together??” Nope. We eventually dropped the young guy off at an apartment complex somewhere in the city, and finally headed to my friend’s apartment. Since the cab driver had kept the meter running the entire time, I had to negotiate the price. I managed to get what was normally a 55 kuai cab ride for 45. What can I say? I’m persuasive.

I arrived to a full-house of Ningbo and Beilun teachers. Beilun in the beach district about another half an hour past me on the highway, and the Beilun teachers would also be staying for the weekend. After about an hour, we made our way to Laowaitan in an older part of the city full of western restaurants and bars lined with cobblestone streets. In case you were wondering the “Laowai” part of Laowaitan is a coincidence. The group of us met up with a Chinese friend who speaks perfect English, and we all headed to a bar that was giving out a free Halloween-themed cocktail to those dressed in costume. When we arrived we were surprised to find that the cocktails all had Halloween names with no list of ingredients. We all decided to order different cocktails and see what they were. I ordered the “Halloween Martini” which was a pomegranate martini with a black olive garnish. While the martini was really good, I was almost more excited about the olives. It turns out the “Vampire” was a grapefruit martini with little ears and a tail made out of orange peel, the “Midnight Martini” was a chocolate martini and the “Vigorously Ghost Drink” was a Bloody Mary. Interesting.

Overall, it was a great Halloween. I had the opportunity to educate hundreds of Chinese people about America’s arguably craziest holiday, created 5 different costumes from scratch, and celebrated the night away with other American teachers. Now if I could just stop humming “This is Halloween” like a crazy person.

2 comments on “How to Bring Halloween to China”