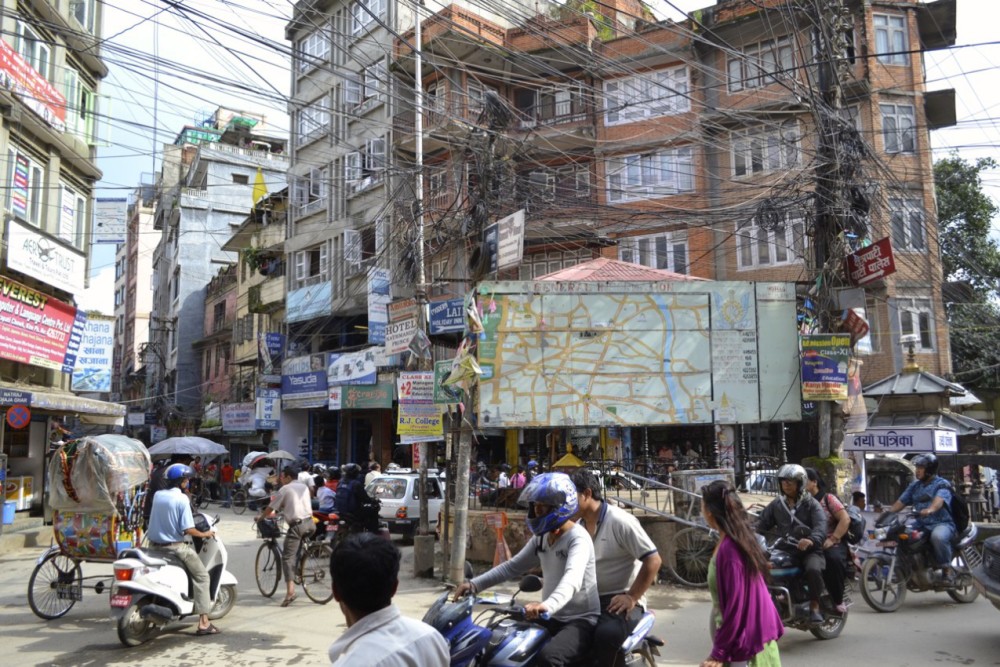 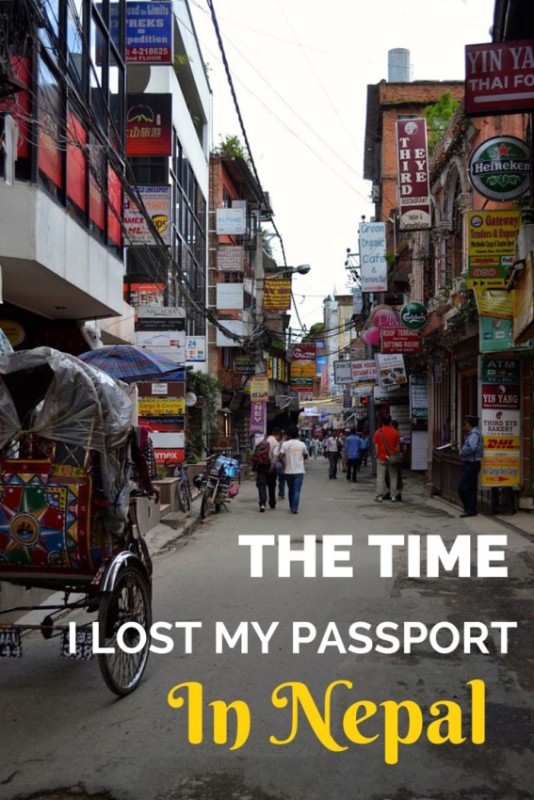 If you haven’t already heard, there was a horrible earthquake in Nepal a few days ago. The death toll has reached 3,700 people and counting. Mount Everest experienced a massive avalanche, the UNESCO World Heritage site in Kathmandu is demolished and many people are unable to enter their homes for fear they may collapse at any minute.

In memory of all those lost, I decided that this week I’d tell one of my favorite stories of kindness while traveling… wrapped in ridiculous misadventure, of course.

I give you: the time I lost my passport in Nepal. 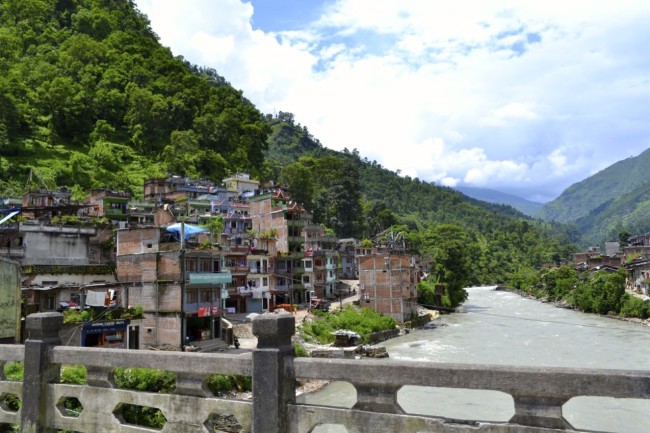 The drive from the border to Kathmandu

Two summers ago, I embarked on a giant month-long trip through Western China, Tibet, and Nepal. To be honest, I never planned on visiting Nepal. I never dreamed of trekking to Everest Base Camp, exploring Nepal’s ancient temples or wandering Kathmandu’s bustling streets. Nepal was never on my radar.

But while planning a trip to Tibet, my friends and I unanimously chose an 8-day tour from Lhasa to Kathmandu. It was an incredible route, and we figured why not explore Nepal while we were in the area? Plus, Kathmandu had amazingly cheap flights to Hong Kong, where I needed to go to get my Chinese visa for the year. 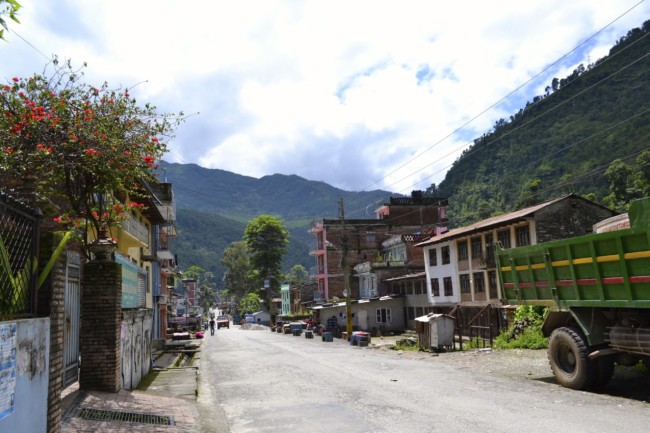 We were stuck in this checkpoint highway village for two hours

Crossing the border from Tibet to Nepal was one of the craziest experiences of my life. I’ll save the full story for another day, but basically, it was extremely ridiculous, disorganized, entertaining…. and also involved us getting detained by the police for two hours.

The main thing you need to know is that the two-hour journey from the border into Kathmandu contains an insane amount of checkpoints. At the stops, you’re required to hand your passport over to the police.

The amount of checkpoints was so ridiculous that I took my passport out of my purse and kept it in the seat pocket in front of me for easy access.

I was stupid… so stupid. 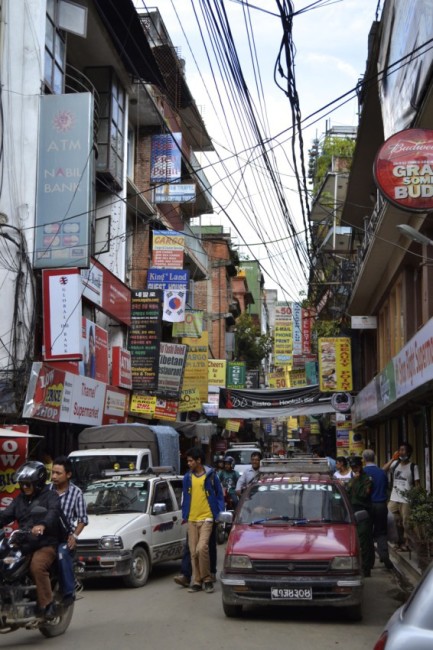 The streets of Kathmandu are packed

I was staying at a hostel in the heart of the city. When we arrived in Kathmandu, the skies opened up and rain descended on us in large, heavy drops.

The van pulled up outside our hostel, where one friend and I were staying. As we stopped to get out of the van, cars were honking up a storm as we rushed to unload our bags. The rain soaked through my clothes as I ran across the street and into the hostel. The van pulled away and I waved to my other friends, who had booked a nice room at the Hyatt Regency on the edge of town.

We entered the hostel and dropped our bags in front of the reception desk, ready to check in. “Passports please”, requested the attendant. 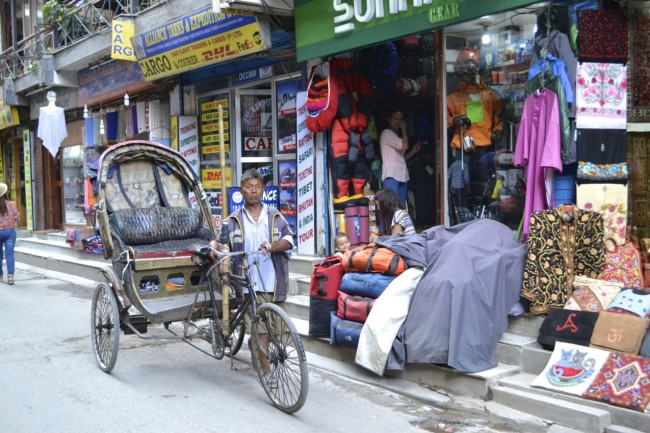 A Car Chase Through Kathmandu

I almost fainted. Everyone saw the look of terror on my face.

We had no way to contact the driver or our friends, but we knew exactly where they were headed. The attendant immediately grabbed my friend and threw him into a taxi. The two embarked on a massive car chase through the packed streets of Nepal.

While my friend was acting out a scene from a James Bond movie, the owner and I phoned the Hyatt to ask if my friends had already arrived. Thankfully they hadn’t, and the hotel agreed to try and stop the van, if at all possible.

I sat on the lobby couch, anxiously fidgeting. The owner brought me a cup of chai to help me calm down. I kind of felt like a woman waiting for her husband to return from war. There was nothing to do but wait. 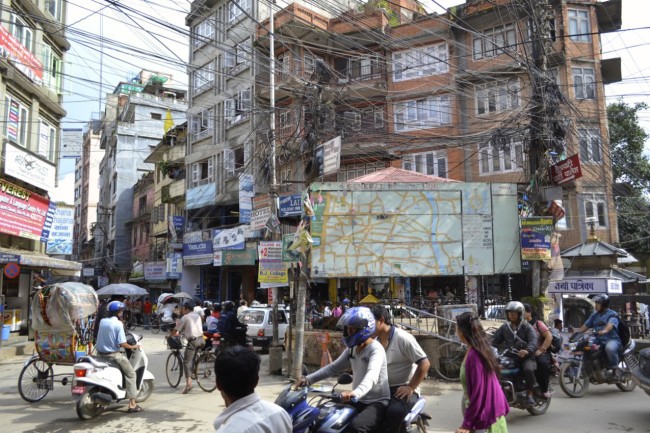 What to do When Disaster Strikes

If there’s one thing that travel has taught me, it’s how to handle a disaster. There’s no point in crying over something you can’t control. There’s no need to expend all your energy worrying about something that’s out of your hands.

I really wished I was in the taxi car chase. Instead, I sat on the couch and waited.

To be honest, it was probably the slowest, bumpiest most frustrating car chase ever.

The thin streets of Kathmandu are packed with cars, motorbikes, and rickshaws, with little room for traffic flow and pedestrians. Here’s a quick video of what the car chase was probably like, with the addition of a rainy downpour and the hostel worker urging the driver to go faster.

Getting My Passport Back

After about twenty minutes of anxiously waiting we FINALLY received a phone call from the Hyatt.

Apparently, my friend’s taxi had caught up with the driver as he was outside the hotel. The driver had found my passport and was standing there holding it with a confused look on his face.

I’d like to think he would have turned it into the hotel, or brought it back to my hostel for me because if he was the type of person who knew what to do with a stolen passport he would have hightailed it out of there!

Losing your passport is one of the scariest things that can happen to you while traveling, especially in a developing country with little infrastructure like Nepal. To this day, I am still thankful to the amazing staff of Trekkers Home for immediately jumping to action to rescue my passport. I honestly don’t know what I would have done without them.

Well, I probably would have had to get a new passport, missing not only my time to get a visa in Hong Kong, but also my teacher orientation in Shanghai.

After the horrible tragedy that befell Nepal this week, I wanted to call attention to the amazing people in Nepal that helped me in my time of need. It was a genuine “faith in humanity” moment that I’ll never forget, and one of the biggest reasons why I’ll love Nepal forever. 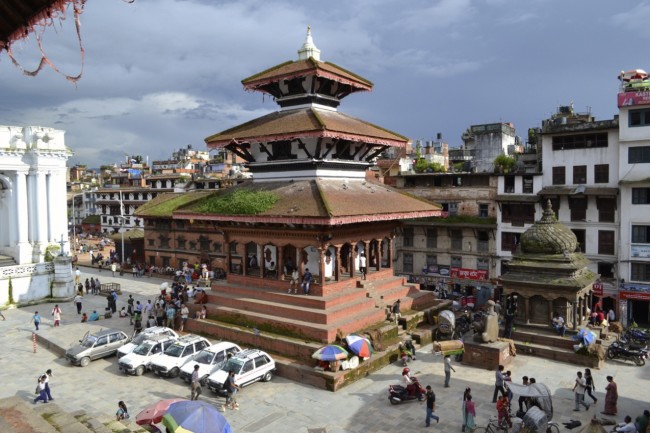 Have you ever experienced a “faith in humanity” moment while traveling? Tell us the story in the comments!

19 comments on “The Time I Lost My Passport in Nepal”