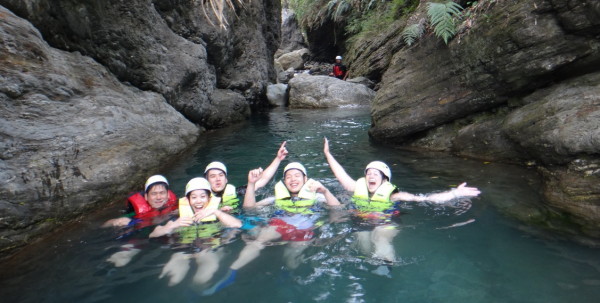 I know what you’re thinking: What the heck is river tracing? Only the most awesome new outdoor sport there is! 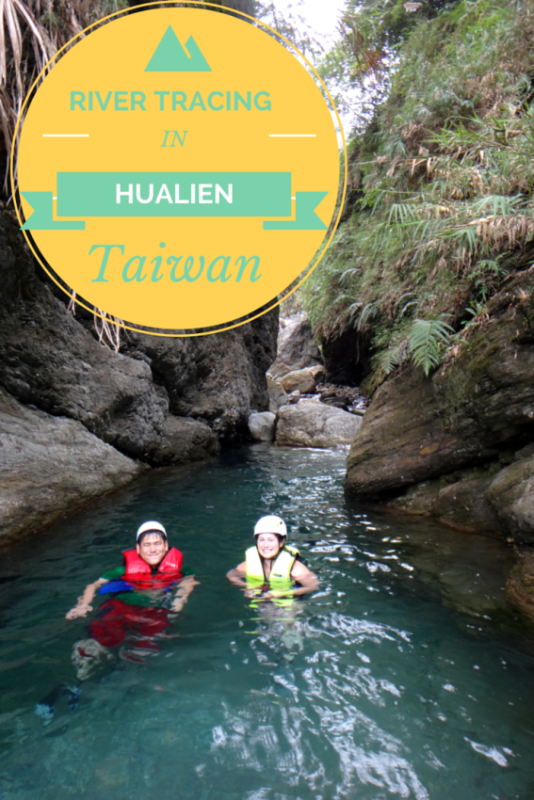 What is River Tracing?

“First developed in Japan, river tracing is a combination of hiking, bouldering and climbing in and above a river canyon. Also called river trekking and related to canyoning, it involves particular techniques like rock climbing, climbing on wet surfaces and understanding the geographical features of river and valleys.” –Hualien Outdoors

One of the most popular places in the world to go river tracing is Hualien, Taiwan. In the summer Taiwan is hot and sticky, but the rivers are beautiful, fresh and clean. On the outskirts of the famous Taroko Gorge, Hualien boasts some of the best river tracing in the world.

I first read about river tracing in Lonely Planet (yeah, guides are sometimes good for something), who recommended the company Hualien Outdoors. At $100-$160, the trip was a bit pricy for me, but after watching the videos on the website, I knew I had to splurge! I contacted the company and told them the dates of my stay, but unfortunately they didn’t have any trips available. BUMMER!

They made us put aboriginal tattoo stickers on our faces

River Tracing with the Locals

But that’s okay, my really awesome hostel with a 30-person dorm room and staff that didn’t know anything about Hualien had river tracing trips! I was really nervous that the Taiwanese river tracing trip was going to be lame, but I was assured by the staff that all of the previous customers said it was really great. Plus it was way less expensive than the one from Hualien Outdoors.

To sum it up, it was lame, and there’s a reason why Hualien Outdoors is much more expensive. 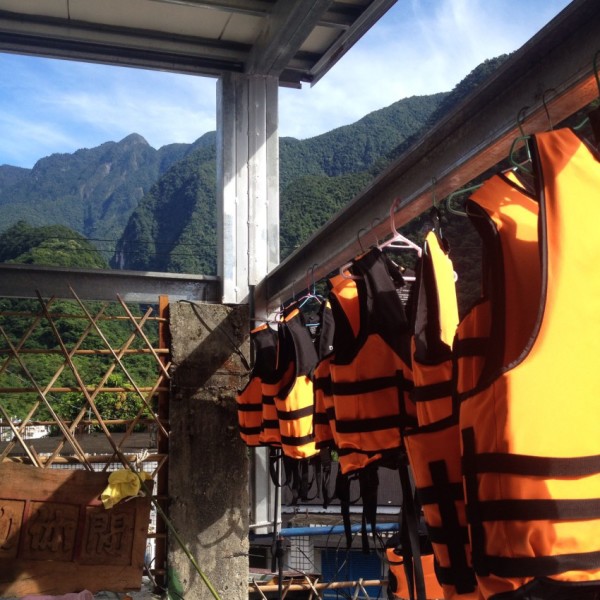 At least we had a beautiful view

Let me paint a picture for you here: I’m in a group of about 40 people. I’m the only foreigner, and I’m the only person who has any idea how to swim. We were also forced to wear wet suits even though it was burning hot outside (I actually thought I was going to faint).

We then start walking down a completely flat river, and spend a solid 20 minutes looking for crayfish. What is this? Fun at the river day? Then once it got deeper, they had us hold hands and float on our backs as they spun us around in a circle. I’m pretty sure they did the same thing in my kindergarten swim lesson.

The only part of the day that was actually cool was cliff jumping 12 meters. It doesn’t sound that high, but man it was scary! Literally no one wanted to go except me. I was elated to finally have something fun and adventurous to do! After I went, a few men decided to jump after me so they wouldn’t be outdone by a girl.

After this, the river tracing leader, an older aboriginal man, kept pointing at me, yelling “BOSS!!” I’m pretty sure it was the only word he knew in English.

Overall, the Taiwanese river tracing day was fun but not what I wanted. I could have just gone to the river and done all of the same stuff myself without wearing a wetsuit or paying any money. 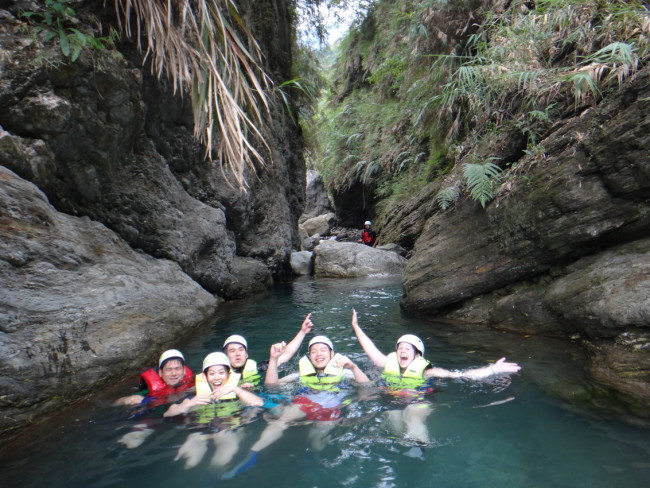 The next day while hiking Taroko Gorge, I met a guy from Singapore who mentioned he was going river tracing the next day. When I discovered it was through Hualien Outdoors I was so jealous! I mentioned I couldn’t go because I had to head back to Taipei that day to catch my flight the day after. To my surprise, the Singaporean was also heading to Taipei that evening, and assured me that river tracing would be over by 4pm and we could be on a train by five or six.

In a world-class move of spontaneity, I borrowed my hostel’s phone to call the company. Thankfully, they agreed to take me on! WhooOOooo!!!! I even lowered the cost for everyone by $20 by making the group bigger. You’re welcome. 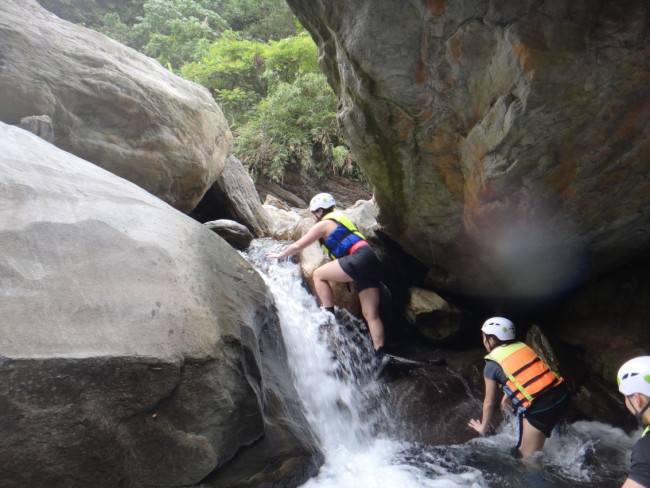 This was much harder than it looks

You get what you pay for

Long story short, river tracing with Hualien Outdoors was incredible. Our guide, Matt, was fantastic. Originally from Canada, he’s a real outdoor enthusiast and started this company from scratch. His trips are more expensive for good reason; They’re more demanding and dangerous. His gear is very good quality, especially the no-slip shoes. Also, the trip comes with health insurance, just in case anything bad happens.

Matt is also very experienced, and can help out in the case of an emergency. He knows which rivers to choose depending on the group, and scopes out his routes to make sure there haven’t been any rock slides or damage. Honestly, you pay for what you get, and a trip with Hualien Outdoors is worth it. 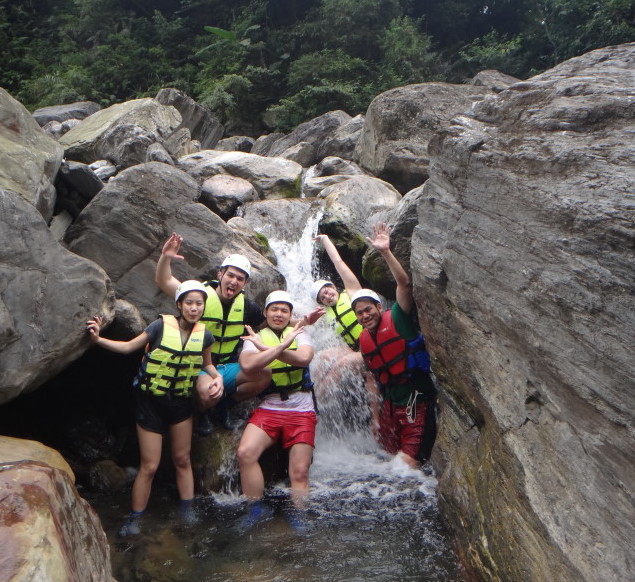 Me and the Singaporeans

After a hearty breakfast, we hopped in the van to drive to our river for the day. Matt selected a decently advanced course for us, considering we were all beginners. I was with a group of four Singaporeans. Coincidentally, the Singaporean guy I met in Taroko Gorge didn’t know the other three Singaporeans. I feel like I’m saying the word “Singaporeans” a lot…. SINGAPOREANS.

Anyway, the Singaporeans and I strapped on our gear, which consisted of slip resistant shoes, a life jacket and a helmet. This is all necessary, especially the helmet and shoes. The last thing you want to do is slip on a rock and crack your head open. 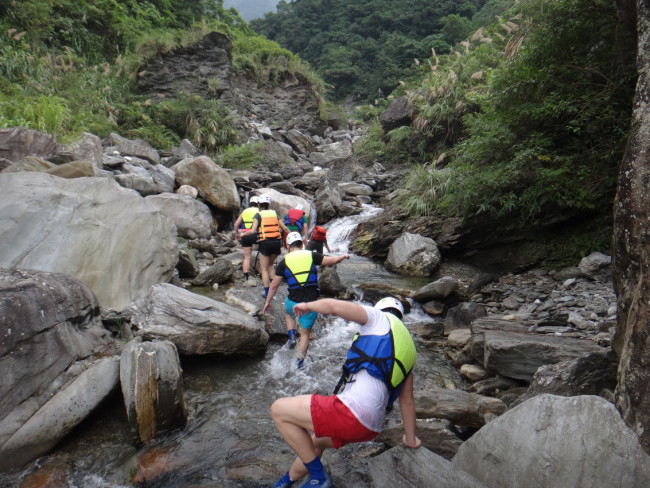 From the moment we stepped foot on the river I knew it was going to be better than my first river tracing experience, and that was just the warm-up! For hours, we swam through crystal pools, jumped from rock to rock, pulled each other up waterfalls and posed for silly photos.

I would describe river tracing as a mix of hiking, swimming, and rock climbing. It’s so much fun, but also extremely exhausting. I also slipped on the rocks a few times, leaving my legs covered in cuts and bruises.

By the time we reached the lunch spot I was exhausted. Eating a lunch of cheese and fruit was very welcome, especially after a year of living in China…. Man, I miss cheese. 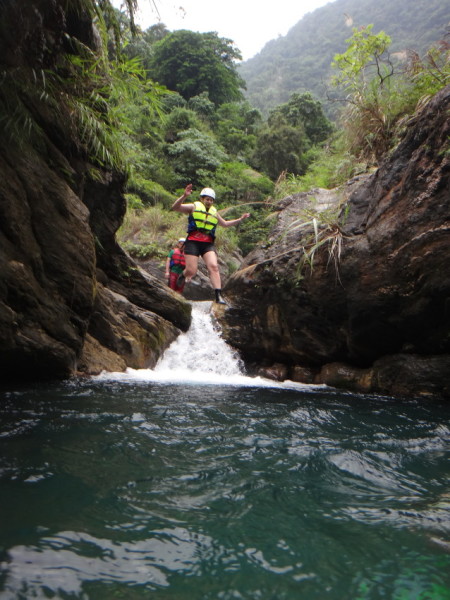 Animals that can kill you

While at lunch we spotted a snake that is highly poisonous, which really freaked me out. It was sitting on a rock right behind one of the guys’ heads, so thankfully nothing happened. Apparently they only bite if you scare them, but it was so close to all of us, it could have gone very wrong very fast.

On the way back to the car, we hiked trails for a portion of the way back. This was fun, but also a bit dirty since we were all wet and wearing water shoes. On the way back we spotted way too many spiders the size of my head, and a plant that gives you the reaction of a bee sting if you touch it. Where are we? Australia? 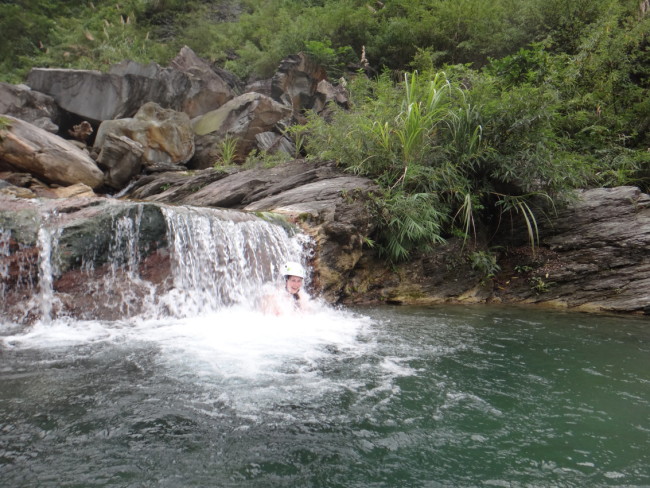 I can’t believe I almost missed out on this

Being Spontaneous is Good

There’s something to be said for being spontaneous. River tracing in Hualien was probably my favorite experience from my trip to Taiwan. I say “probably” because the trip was so incredible it’s hard to choose! I’m really glad I made the switch and decided to stay in Hualien for an extra day. While it meant losing my last day in Taipei, I know I’ll be back.

If there’s one benefit to traveling solo, it’s that you can make split-second spontaneous decisions without considering another person. If I was traveling with someone else, I probably would have had a tense discussion about the itinerary. For me, the money was well-worth the experience, and I really, really, really wanted to go. Thankfully, I didn’t have to convince anyone but myself! 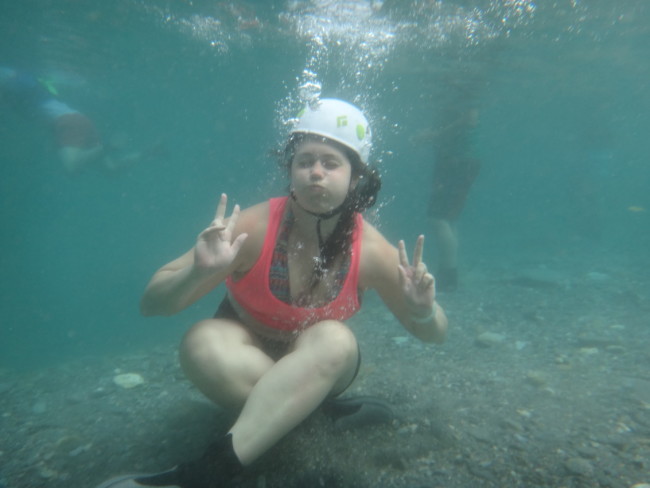 In conclusion: if you go to Taiwan, you HAVE to go to Hualien to hike the Taroko Gorge and go river tracing with Hualien Outdoors.

In case any of you were wondering, I was not sponsored by Hualien Outdoors. I’m not getting paid to write this, and I paid for my river tracing experience out of pocket. I just wrote this post because I really enjoyed my experience with them, and I wanted to share this amazing company with all of you! Whether a post is sponsored or not, all opinions are always my own!

44 comments on “River Tracing in Taiwan”