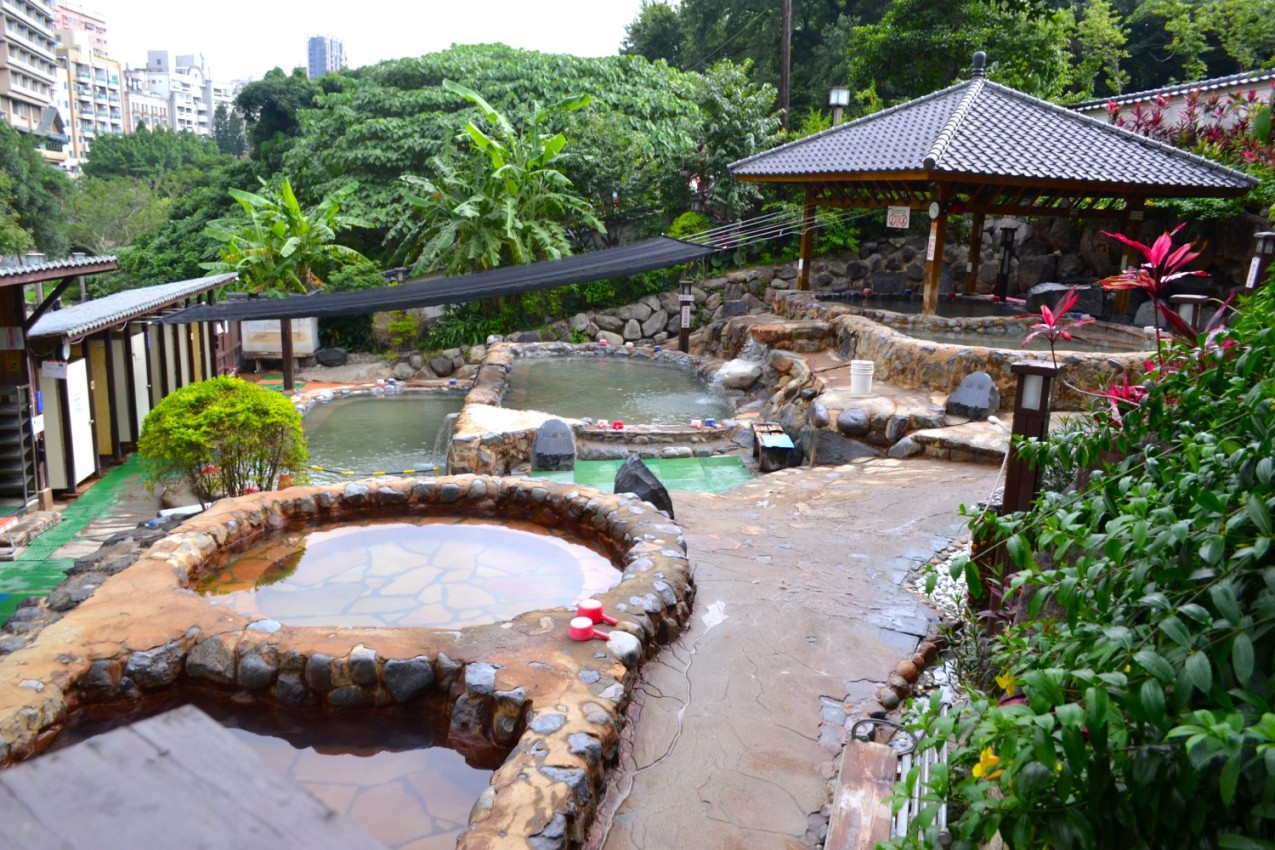 When planning a trip to Taiwan, I knew I wanted to check out one of Taiwan’s famous hot springs. After days of hiking the Zhangjiajie Avatar Mountains, my whole body was killing me. Thankfully, the Beitou Thermal Valley hot springs are accessible by subway from Taipei! The next hurdle was figuring out which of the many hot springs to visit.

The Beitou area is littered with so many different types of hot springs, from gendered naked baths to fancy private rooms in hotels. I eventually settled on the cheapest and most culturally immersive hot spring: the Beitou Public Hot Spring. Costing a little over a dollar, it’s not fancy but the water comes directly from the natural sulfur hot spring just up the hill. I figured that worst-case-scenario I’d be losing a dollar.

In the morning I woke up bright and early to explore the Tamsui stop at the end of the red line. Tamsui is Taipei’s version of a beach boardwalk with restaurants, shops, food stalls and… temples. I enjoyed some street food snacks, ducked in and out of air-conditioned shops, and explored one of the temples, which shockingly had wifi! Taiwan never ceases to amaze me.

After becoming a sweaty mess, I decided to head a few stops down the line to visit the Beitou hot springs. From Beitou you can take a different car to Xinbeitou, or “new Beitou”, where all the hot springs are. This subway car surprised me because it was brightly decorated with pictures of people enjoying the many activities of Beitou. Inside the car, there were interactive televisions made to look like mini wooden baths, that you could use to learn more about Beitou’s history, culture, and, of course, hot springs. 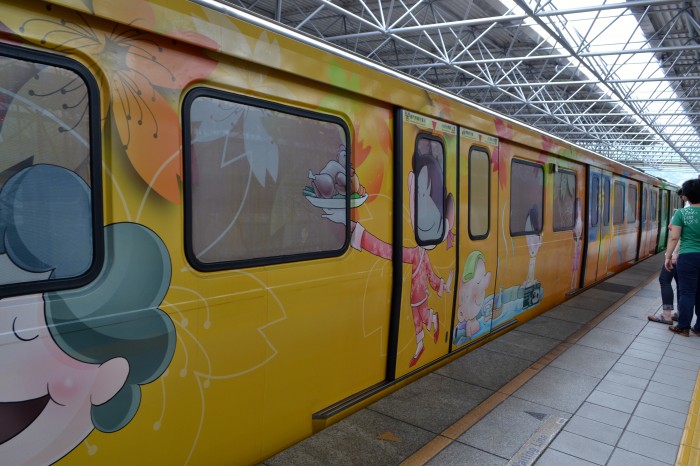 After arriving in Beitou, I first visited the Hot Springs Museum. The museum is set in an old Japanese-style home, and you must take off your shoes to go inside. Once inside you can wander the house and learn about the history of hot springs in Taiwan. The museum explained that prior to the Japanese occupation, the Chinese living in Taiwan rarely washed, aside from their face.

When the Japanese arrived in Taiwan, they took advantage of the natural hot springs and created large public baths for people to enjoy. The Japanese place a high value on cleanliness and would visit these baths multiple times a week. Taiwan’s new leaders also encouraged locals to have bathtubs in their own homes, which was previously unheard of. The museum doesn’t have much to see besides some really old bathtubs, but it’s worth popping in to look around since it’s free and easy to find. 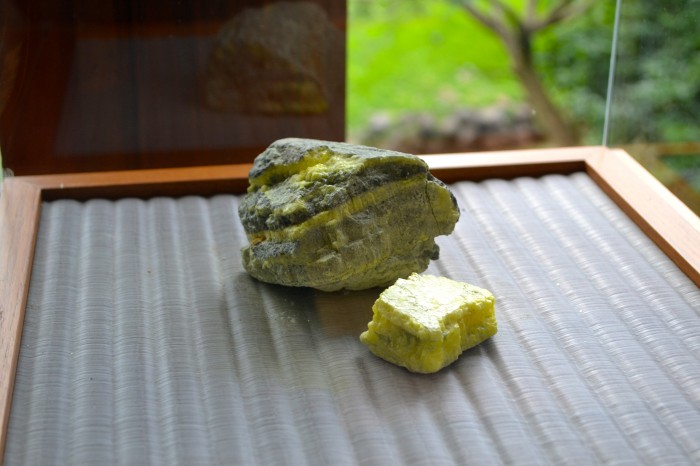 Sulfur on display at the hot springs museum

After the museum, I immediately ran into the public hot springs; I was really surprised by how easy they are to find. But the hot springs are only open at certain times of day to keep the water clean, and I had an hour to kill. I wandered past the hot springs all the way to the natural sulfur springs called the Beitou Thermal Valley.

The springs have a beautiful natural turquoise color with large amounts of steam rising off the water. I was surprised to see such a large amount of steam because it is really hot in Taipei in the summer. It was probably about 95 degrees F (35 C) with 90-something percent humidity.

If you’re in the area, I recommend heading down to this natural sulfur spring. It’s definitely one of the coolest things to do in Taipei! 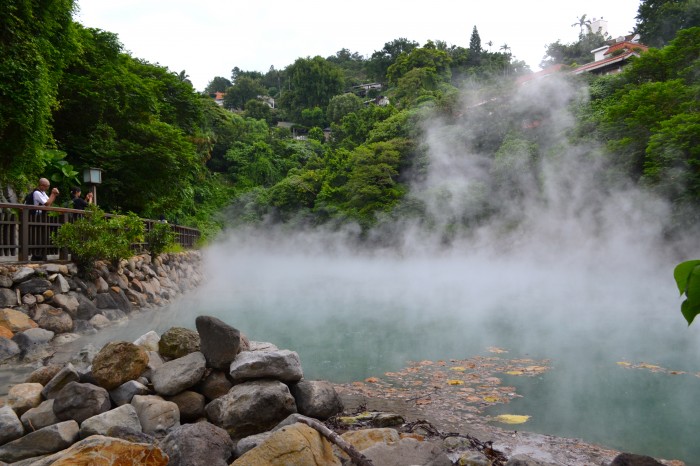 For anyone that has seen Game of Thrones on HBO, think of the first season when Ned Stark goes to Kings Landing. He looks completely out-of-place and is constantly sweaty in a sort of pallid, sickly looking kind of way. He’s a man of the North and he’s not used to the hot weather of Kings Landing in the summer. The entire time I was in Taipei I basically looked like Ned Stark in Kings Landing, but without the beard.

Enough about my inability to cope with heat and humidity, back to the hot springs!

I eventually found a sign listing the temperature of the natural springs at 90 degrees Celsius!! That’s 194 degrees Fahrenheit! No wonder they don’t let you swim around, your skin would melt right off.

Overall the sulfur springs are a really cool site to check out, even if they do smell faintly of farts.

After wandering the sulfur springs, I headed back to the public hot springs. I was still super early, so I purchased my ticket and waited. Most of the patrons were retired locals who use the hot springs as a fun afternoon get together with friends.

There were also a few Brits and Americans waiting, some of which had been to the hot springs before. A few minutes before the springs were scheduled to open, all of the older Taiwanese patrons suddenly formed a line. What?! After living in mainland China for a year this line was utterly shocking. Especially since it’s the older generation that is the worst about standing in lines in mainland China.

When it was finally time to enter, we all filed in and I proceeded to rinse off in an extremely cold shower and lock all of my things up in a locker. That was when I ran into two acquaintances from my Freshman year of college! I hadn’t talked to either of them in four years and I had no idea either of them would be in Asia, let alone Taiwan at the Beitou hot springs. Talk about a small world right? 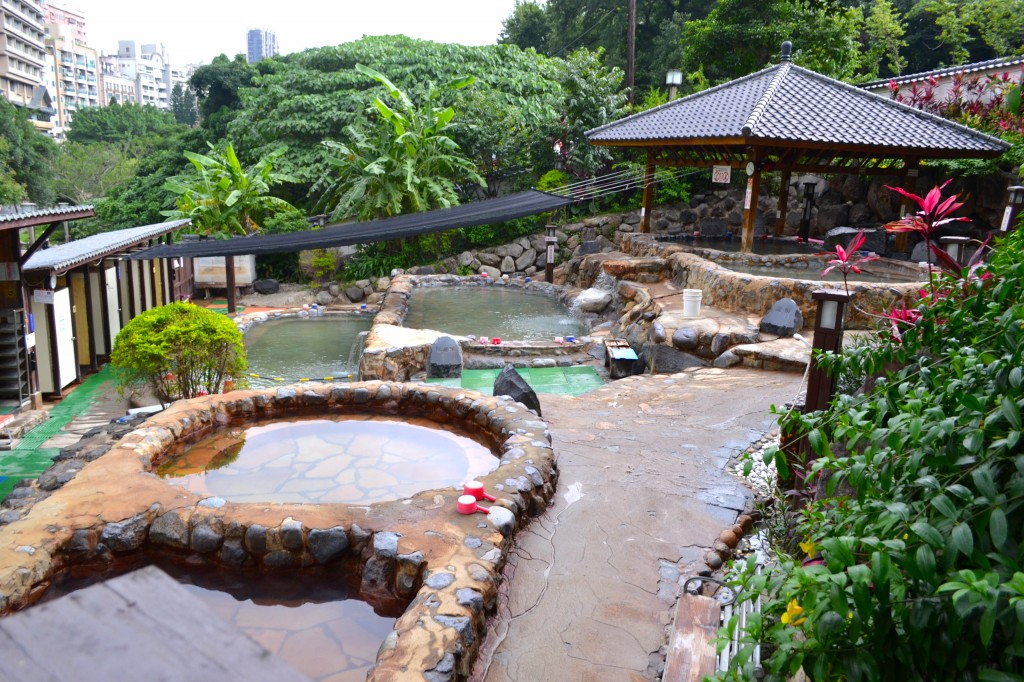 Why You Should Visit the Beitou Hot Springs

The Beitou Public Hot Springs consists of three pools of slightly differing temperatures. You’re supposed to work your way up by starting in the bottom pool, which is about the temperature of a hot tub. I didn’t even attempt to go in the hottest pool for fear that it would melt my skin off! In addition to the hot springs there are also two cold spring pools; trust me, these pools are ice-cold.

Since the hot springs are co-ed, you have to bring a swimsuit. A part of me wanted to experience a full-on nude hot spring, but I wasn’t about to pay more money for the sole purpose of making myself feel uncomfortable. There are showers where you can change into your swimsuit, and you’ll be expected to rinse off before you go in the pools.

I found it interesting how strict the pool management (and the locals) are about making sure everyone soaks in the springs the right way. In these hot springs, you must fully submerge your body so that only your head and shoulders are out of the water.

Don’t even try to sit on the edge with just your legs in the water or you’ll be told off by a regular. The full body submersion is even enforced in the cold springs! I went in up to my thighs to test it out, and a man motioned me to sit down. So I slowly crouched in the water up to my stomach. He motioned at me again and kept his eyes on me until I submerged myself up to my shoulders, silently crying in agony. 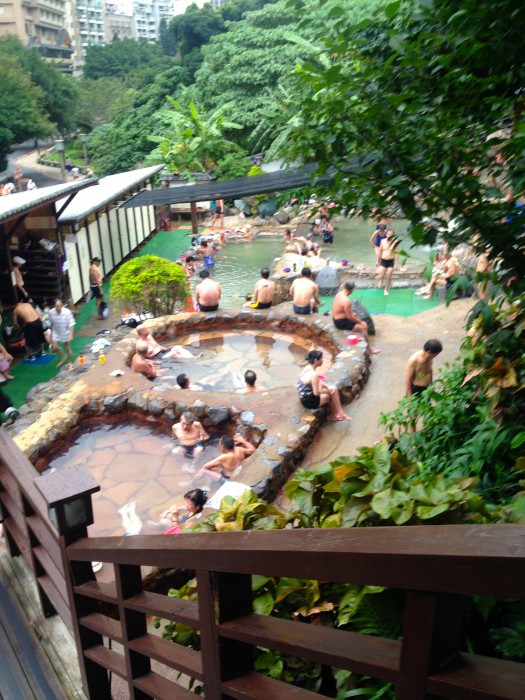 No photos allowed, but I broke the rules

Overall I had a great time at the Beitou hot springs and it was definitely a great deal for the price ($1?!!). If you want to be pampered, I’d suggest heading over to one of the hotels, but if you want to experience hot spring culture along with the locals, the public springs are the way to go.

Imagine the springs as a very traditional and cultural version of a public pool, and you’ll go in with the right mindset. Be sure to bring a towel because they are not provided. Also, bring a plastic bag for your wet swimsuit and a change of clothes. The last thing you want is a wet butt on the subway ride home.