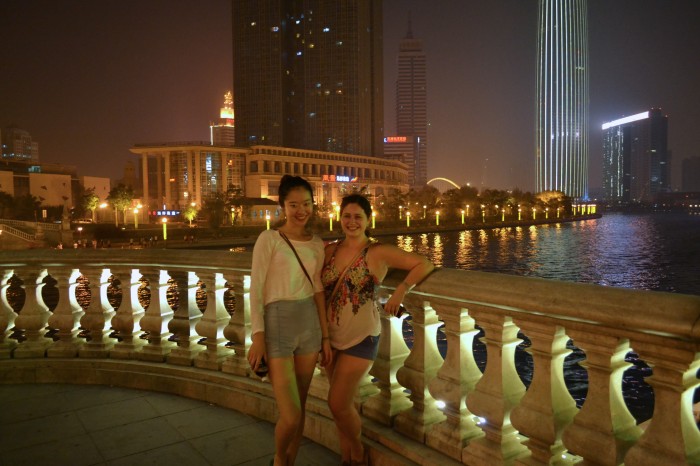 My first full weekend in Beijing, Suzy invited Mark and I to stay with her and her family in Tianjin for the weekend. Tianjin is a very large city right near Beijing, and by train, you can get there in about a half an hour. Saturday morning, Mark and I woke up early and met each other at the subway and made the 45 minute trek to the  Beijing South train station. We hadn’t previously purchased tickets, so we had to wait a good two hours before we could board the train. After waiting out our time at Mc Donalds (the only place with food where we could sit down), we boarded our high-speed train to Tianjin!

Suzy and her mom met us at the train station, and brought us back to Suzzy’s family’s nice apartment. As we arrived, an old Chinese woman shouted “laowai lai le!!!”, which basically means “laowai’s have arrived!!!”. Dying of laughter, it was our official quote for the rest of the day.

Once we arrived at Suzzy’s, we ate lunch and made homemade dumplings! I made dumplings once before in the hutongs of Beijing on an Alliance excursion, but this time was a bit more fun, because we got one-on-one help from Suzzy’s aunt. I ended up making at least thirty-something dumplings while Mark made a solid three. He liked to claim that they were perfect specimens, but mine were much better.

After eating lunch, Mark, Suzzy and I went to an old-town street. It was so sunny and bright I wish I brought my sun umbrella! While Suzzy and I are more of the wandering type, we made it to the end of the market in under an hour because the boy in our group likes to DO things. At least I got a few good pictures.

After wandering the market for less than an hour, the three of us went to the China China house. Why is it called the “China China house”? Because it is a house made out of china! Apparently a few years ago a rich man bought a historical home and covered the entire building in artistic pieces of China and glass. The three of us spent at least a solid hour and a half exploring the beautiful house. It kind of reminded me of Barcelona, where the architect who designed the famous cathedral also created a house covered in tile with wavy walls. Check out some of the pictures in the gallery to see how interesting the house is!

After having a great time at the CHINA CHINA HOUSE, the three of us went to the foreign concession district to ride bikes and look at all of the Western architecture. We rented a 2-3 person cart/bike for two hours. There were only two sets of pedals, but Suzzy managed to squeeze between Mark and I. It took us a few minutes to figure out that Mark’s wheel was the only one that worked, and that I was given a dummy wheel. Mark said it was to “appease female back-seat drivers”.

The concession area was very interesting to see. I would describe it as “Europe with Chinese characteristics”. We had a great time being obnoxious laowais, racing other bicycle carts, shouting “laowai lai le!!” and singing Ke$ha songs. Everyone had a good laugh because there are literally no foreigners in Tianjin. If you’re going to stick out, why not poke a little fun at it. There was one cart/bike with two girls that we ran into about eight times, and every time we would race each other, laugh and take photos. Overall, it was a great experience and we gave everyone we passed a bit of humor.

Unfortunately, when we went to return the bikes, we ran into a typical Chinese rip-off. We had been told that it was a 150 kuai deposit for the bikes, but when we returned they only gave us 100. At first we thought it was an honest mistake, but then we began to realize that this was a typical scam. The receipt we were given didn’t have the deposit amount on it, and there was no way to prove that we had actually given them 150 kuai. Suzzy and I started to make a scene, yelling at the guy in Chinese. The man refused to talk to us and told us to “just leave”, while shooing us off of his property. He then went on a rant to the five or so bystanders about how foreigners always try to cheat Chinese people. Yeah, sure buddy. While it was less than $10, it was still infuriating. We came to the conclusion that they must do it all of the time, even to Chinese people since Suzzy was with us. Even though getting scammed out of 50 kuai wasn’t that great, the three of us had a great time on the bikes and enjoyed ourselves nonetheless.

When we returned to Suzzy’s, we ate a great Tianjin-style dinner, complete with our homemade dumplings! After dinner, the three of us left to go walk along the river. The river is absolutely beautiful at night, surrounded by brightly lit skyscrapers and older Chinese people fishing and singing Chinese opera. There is also a fantastic European-style bridge that looks like it is left over from the foreign concession period (but it’s new, of course).

When we were walking, we saw a beautiful hotel with a giant hole through the middle. It was literally a square doughnut of a hotel. Mark and I commented on the hole, and how it didn’t even have windows on the inside. Suzzy explained to us that the hole is for fengshui; because of the bend in the river, the water can “flow” through the hole. She explained that the positive fengshui would bring the hotel more money and success. I commented that if they wanted to make money, they could have used the space for more rooms.

That next morning, we ate a typical Tianjin style breakfast of what I can only describe to be zesty flatbread. It was pretty good, although there was more bread than I could ever eat. That morning, Suzzy’s parents drove us back to Beijing, where we had lunch at the best kungpao chicken restaurant in all of Beijing (according to Suzzy). There was a really long wait for a table, so we wandered a nearby outdoor market with hanging lanterns overhead. There were many bubble tea places and restaurants along the strip, but it was hard to see anything because there were so many people, all complete with sun umbrellas despite the shade from the trees overhead. I’d love to go back again though, with more time.

Eventually we made it back to the restaurant, where Suzzy’s family ordered for us. The first thing to arrive was a large soup with the spicy ma la flavoring found in mapuo dofu and hot pot. I was really excited until I realized what was inside the pot: stomach, blood tofu and intestines. Yep, that’s right. I made a show of eating at least one bite of each. The blood tofu wasn’t that bad, but the thought of eating coagulated blood didn’t sit well with my stomach. The stomach and intestines were definitely way too chewy for my taste, and the shape of the intestines really threw me off. I did eventually get to gorge myself on kungpao chicken though, and yes, it was amazing.

2 comments on “Trip to Tianjin”