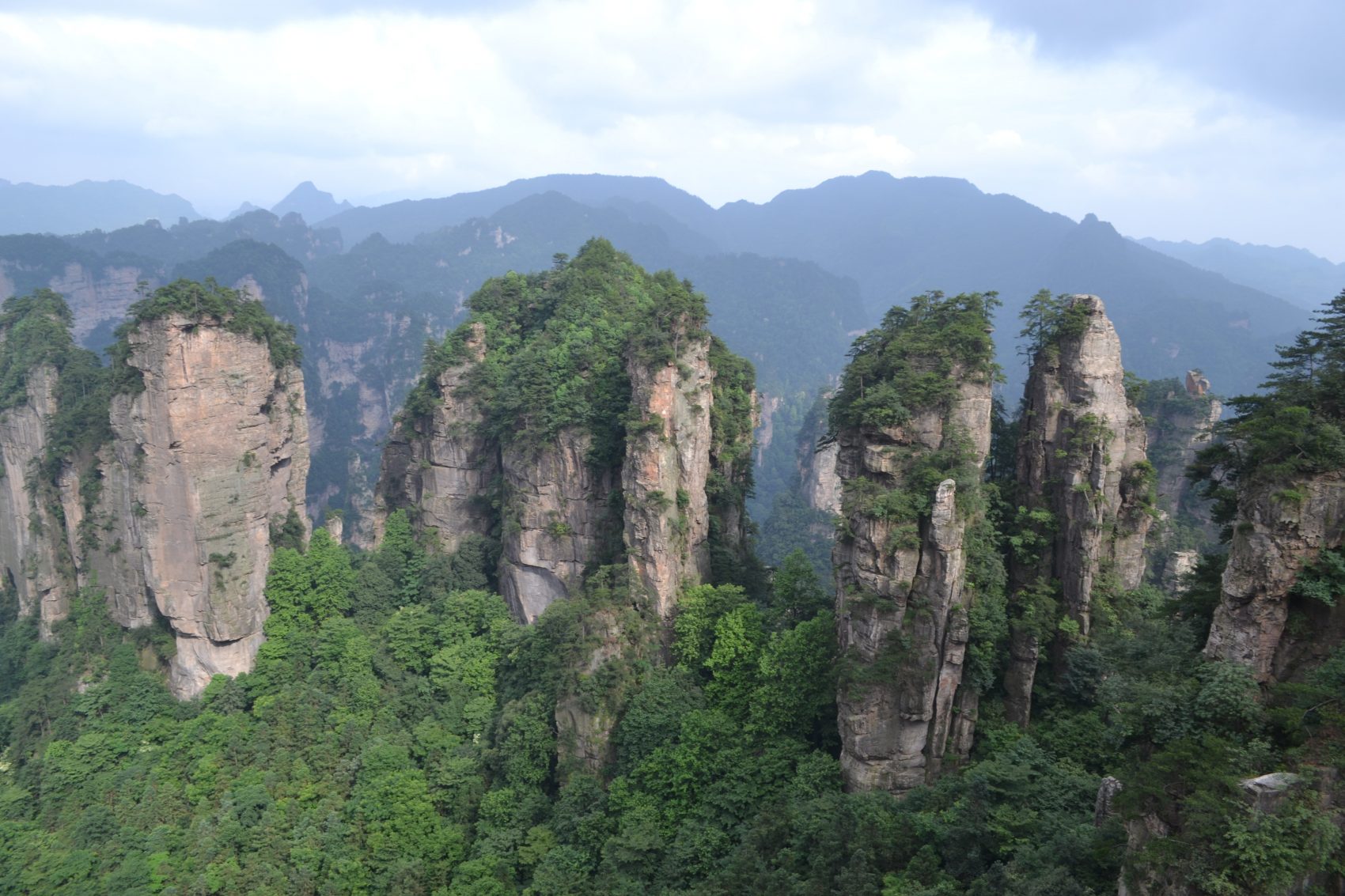 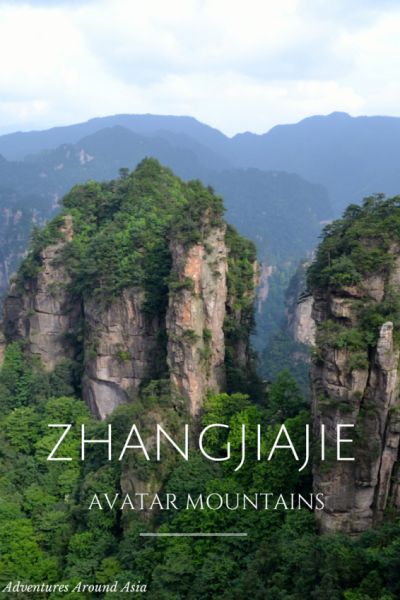 After spending a brief evening in Shanghai, I embarked on a 24 hour overnight train to Zhangjiajie, Hunan: home of the “Avatar Mountains”. If you’ve seen the movie Avatar (the one with the blue aliens, not the air bending child), you may remember the “floating mountains”. These mountains are huge column peaks that float in a magnetic field. Why are the Zhangjiajie mountains now dubbed the “Avatar Mountains”? James Cameron actually got the idea of the floating mountains in Avatar from the Zhangjiajie mountains in Hunan. On a perfect day the clouds will drift through the column peaks making the mountains appear as if they are floating!

Zhangjiajie has always been on my bucket list, just check out this post I wrote before studying abroad winter of 2012! After seeing the Ice Festival in Harbin this winter, Zhangjiajie was the last place in mainland China I really wanted to visit. I guess after over a year and a half of living in China I’ve pretty much been EVERYWHERE. 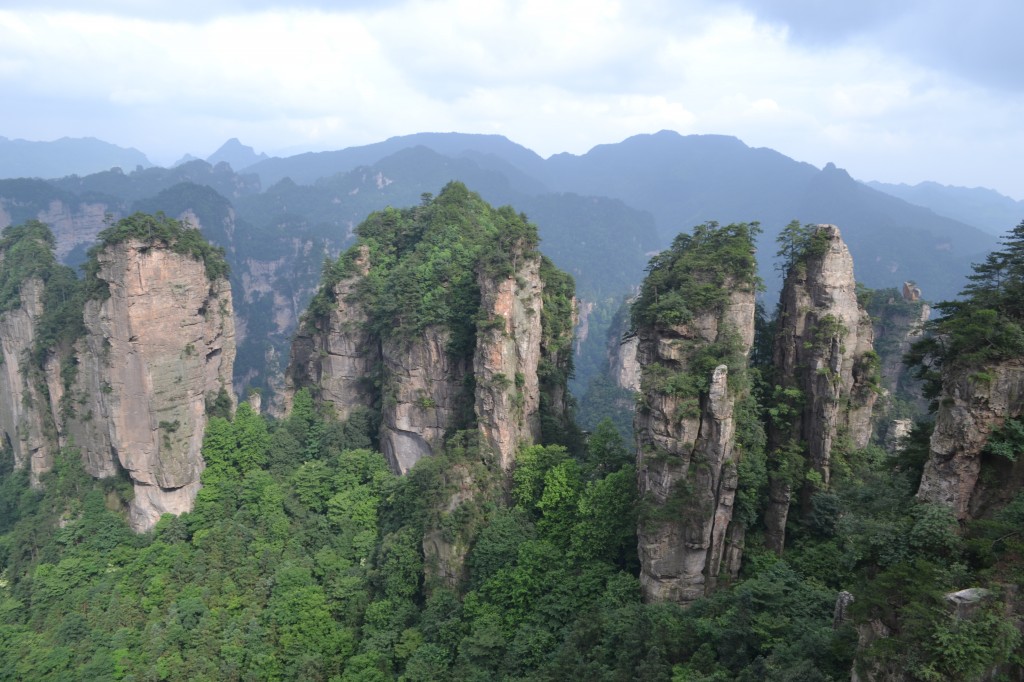 I gave myself two fully days and one (almost) full day to explore Zhangjiajie. I heard the park tickets last for three days, so I figured it would be enough time to see everything. After visiting I realized that this was definitely not enough time! I should have given myself three or four full days to see everything. While the main park’s ticket lasts three days, there is another park called the Tianmen Mountains, that deserves a full day to itself! 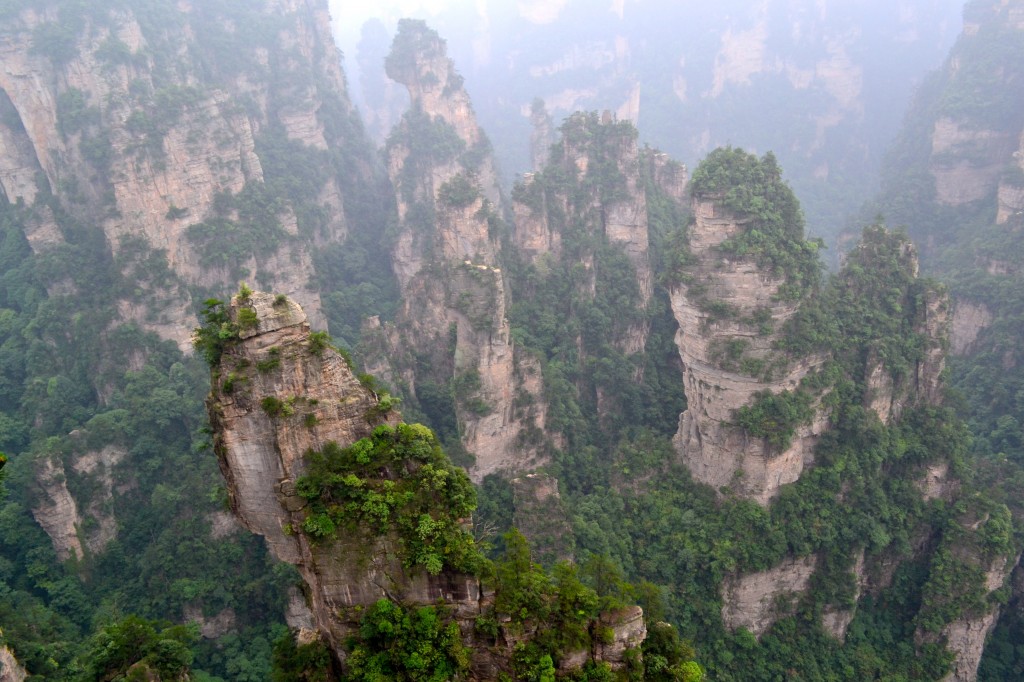 View of the mountains from above

Overall, hiking Zhangjiajie was an amazing experience. The owner of my hotel, Yijiaqin Guesthouse, helped us map out routes for each day, which really helped us hike efficiently and maximize our time. The main issue with Zhangjiajie is that your experience really depends on the weather. The first day we had crystal skies and amazing views, our second day was a bit foggy and rainy, and the third day was pretty much horrible. The weather was so bad we didn’t even bother hiking the highest mountain to see “the best views” because those climbing down said it was impossible to see anything.

After skipping the last mountain, we started walking along the park’s beautiful gorge, which normally would be a stunning and pleasant walk… except for the fact that the skies decided to open and rain down on us the entire way. I purchased a flimsy pink poncho but I was still drenched. After three full days of hiking, walking for hours in the pouring down rain was not really my cup of tea. 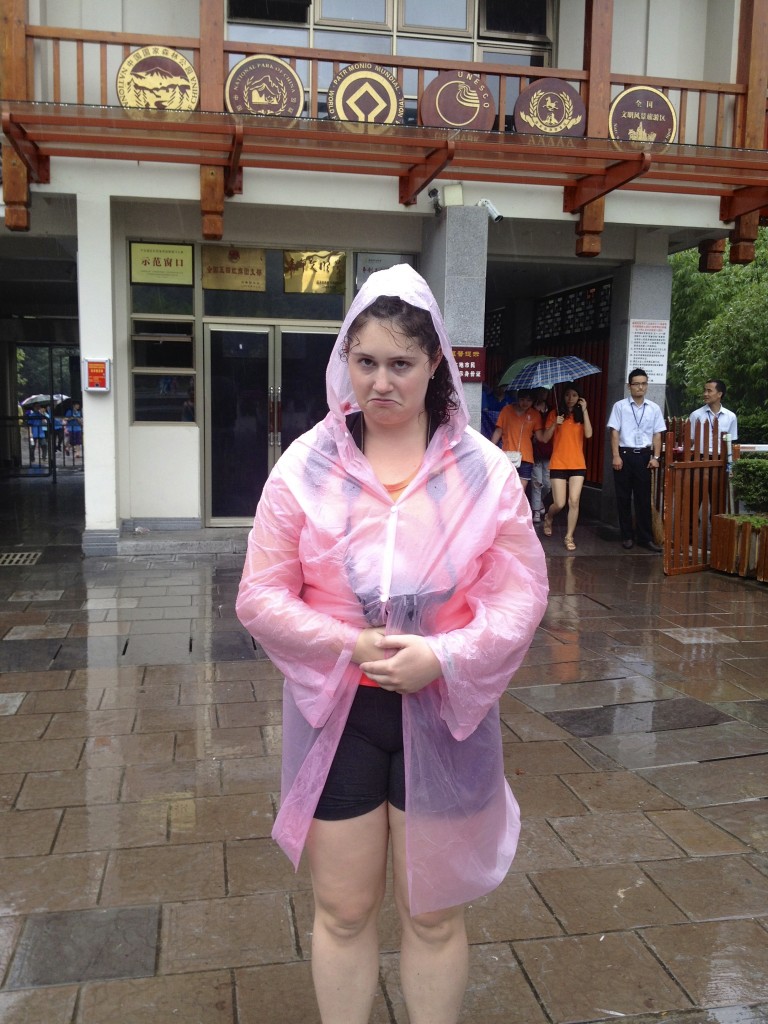 If you’re lucky enough to get good weather, Zhangjiajie has some of the most incredible views in the world! The peaks are made of sandstone quartz, which is very dense in the center, but flaky on the outside. Because of this, chunks of rock slowly break away leaving towering column peaks. Ancient stone steps lead up to the top in a dizzying (and exhausting) climb. If you’re not much of a hiker, Zhangjiajie offers cable cars and a giant elevator that looks straight out of something you would see on the show LOST.

In addition to amazing scenery, Zhangjiajie also has a ton of monkeys; and by a ton I mean: more monkeys than I have ever seen in my entire life. They are everywhere so be sure to watch your food closely. The Chinese tourists actively feed the monkeys, ensuring that they are completely reliant on human food. The upside to domesticated monkeys is that these cute little guys are not afraid of people and have no qualms posing for photos. Just make sure you don’t get too close or you could get bitten like my mom did in Gibraltar. 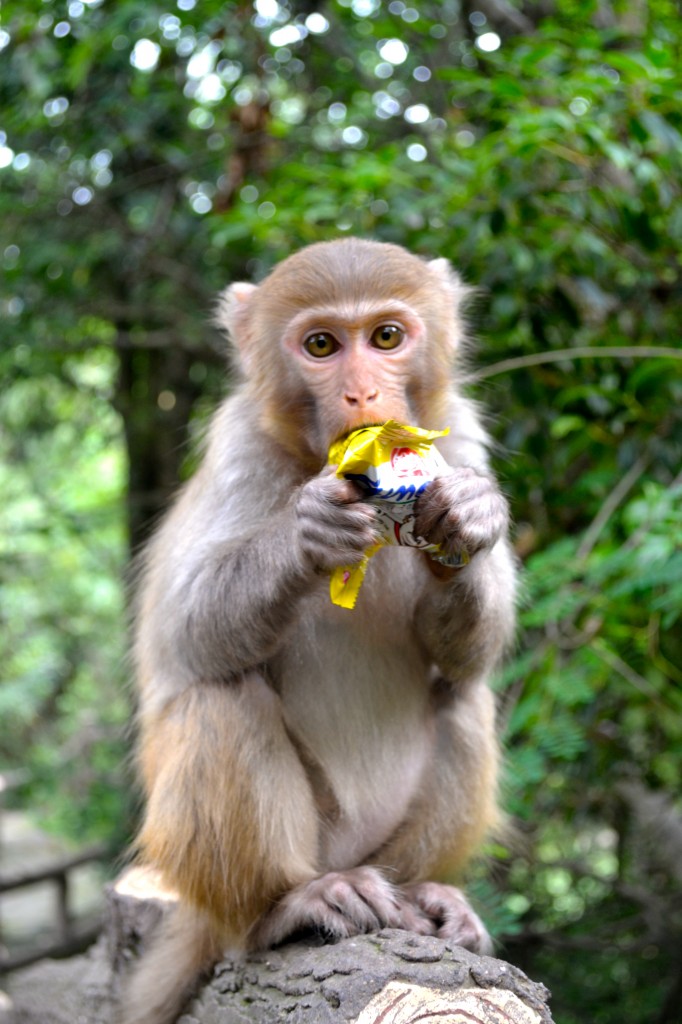 Out of the group of people I was with, I was the only one who wanted to fork out the extra cash for the Tianmen Mountains park. I decided to wait until the last day and go solo, however, I had a train at 1 o’clock so I only had the morning to visit the park. I got to the cable car right when it opened and spent the morning hiking and exploring. I would definitely recommend saving an extra day (and extra cash) to see this park. It starts with a hair-raising 35-minute cable car ride through the mountains to Tianshan, or “heavenly mountain”, with stunning views of the ranges below. Once you exit you can walk along a glass platform attached to the cliff with a straight drop into the forested valleys. 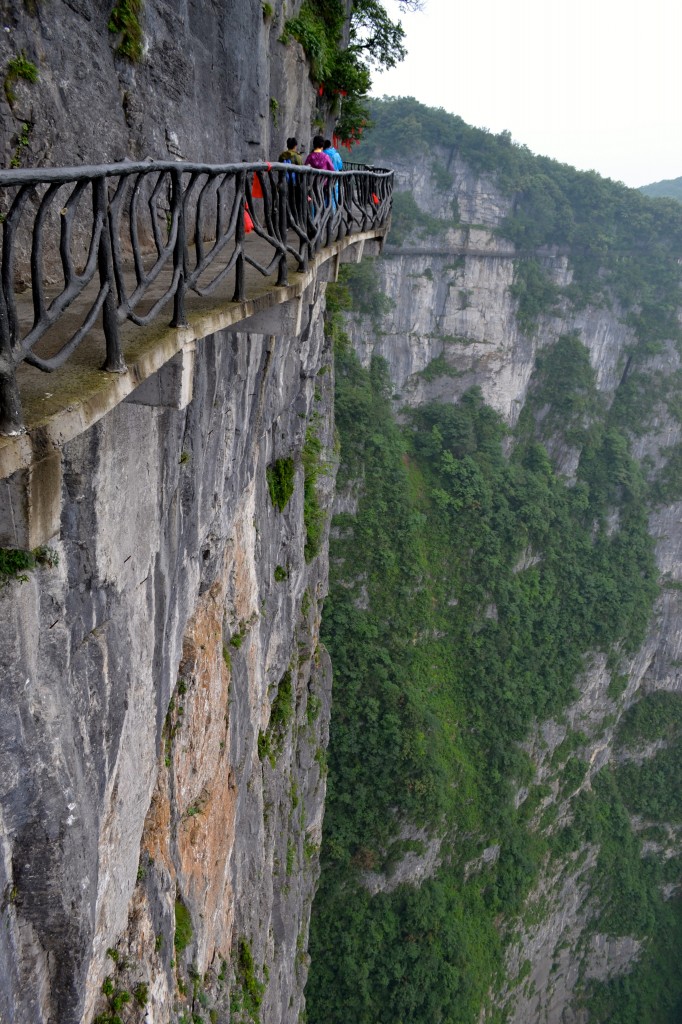 Tianmen is definitely not the place to go if you are afraid of heights because all of the walkways are attached to steep vertical cliffs. Unfortunately, I only got to see about half the park and felt extremely rushed. To save time I took a ski lift back across the mountain top; it cut off half the route, but I did get some amazing views! On the way down the mountain, the cable car stops at a second location where you can take a bus up to a hole in the side of a mountain. Here you can hike up a never-ending flight of stairs and look out the giant hole to see a view of the mountains below. This hole is dubbed “Tianmen” or “heavenly gate”. The stairs to this “heavenly gate” are pretty intense, especially after a few days of hiking. The steps are so small that I had to walk up them sideways with my girly size 7.5 feet, and so steep I wanted to use my hands at some points. It’s definitely a sense of accomplishment when you reach the top though, and it makes the view all the much sweeter. For those of you that may not be able to climb never-ending steep steps, there was a cable car, but it was closed at the time I visited due to a rock slide. 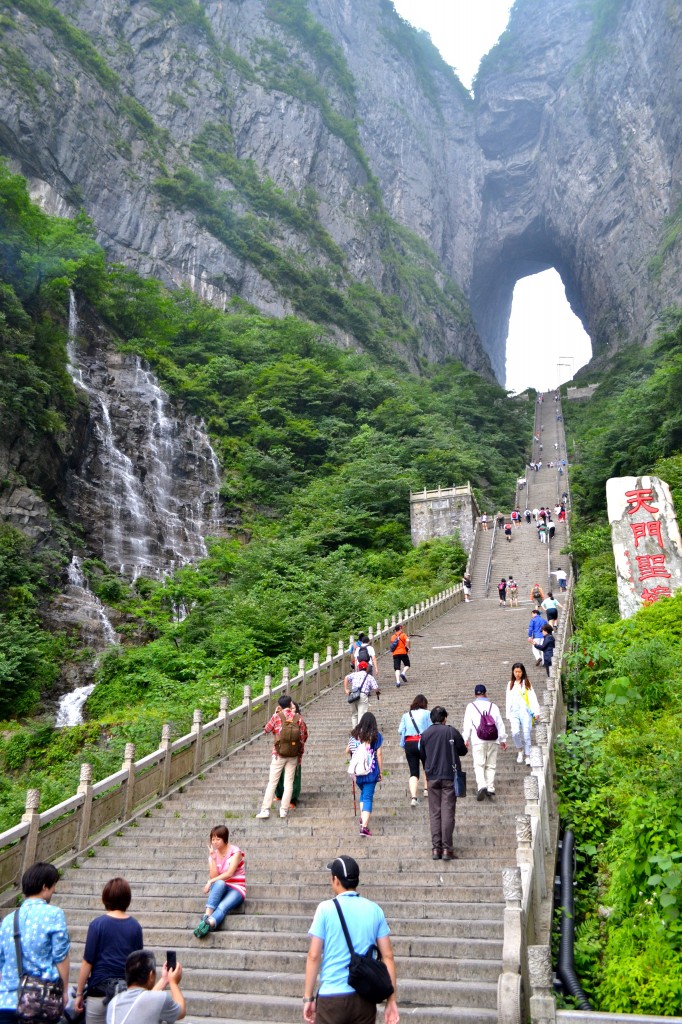 Advice to those visiting

The ticket prices to both parks are pretty steep (about 250 yuan or $40 USD), but if you’re under 24 you can get the student ticket. You’re supposed to show your passport and student ID but a friend I was with filled me in on a little secret: you can pretend your driver’s license is a student ID since the cards look similar and the ticket sellers won’t bother reading the English. It worked! Getting the student price saved me a ton of money, which I used towards visiting the Tianmen Mountains park. If you are exactly 24 years old you can try to get away with it, but the sign says “under 24”. 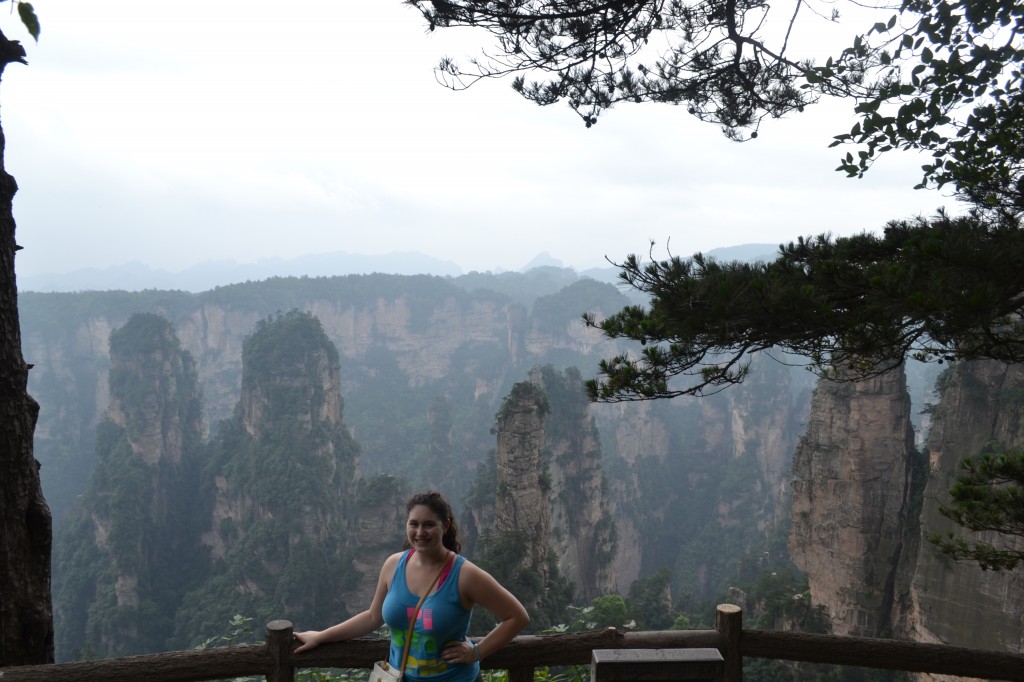 In terms of where to stay, I got a lot of mixed advice before I arrived. Some told me to stay in the park, others said try to book a hostel in Zhangjiajie village. I thought I booked a hostel in the village, but apparently my guesthouse was walking distance from the train station. It ended up working out very well though, because there were tons of cheap restaurants to choose from, and it was a quick walk to the bus station where I could take a 12 kuai ($2 USD) bus to the park. My guesthouse was also walking distance from the cable car to the Tianmen mountains. If you’re looking for a place to stay, Yijiaqin Guesthouse is a great choice, and you can find it on Hostelworld.

As for packing, make sure to bring a small daypack with a large water bottle and plenty of snacks. The food in the park is very overpriced, and only good for a quick snack if you’re starving. You can always try to bargain the food prices down a bit, especially if you’ve got a few people ordering from the same person. In addition to food, accommodation in the park is also overpriced, so I would definitely suggest staying outside the park. The last bus leaves around 6 or 7 so be sure to start heading out around 5 or so.

Check out some more photos from my trip!

Gotta promote the Avatar connection any way we can!

natural land bridge connecting two mountains. Yes, you can walk on it

Natural hole in the cliff rock.

Yes, I did walk out on this