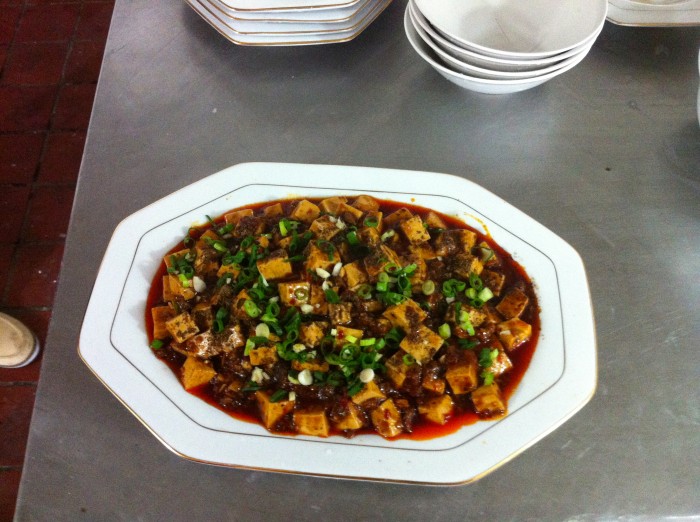 The last few weeks of my time in Xi’an was a blur. There was so much to do! I had to write my capstone and study for my Chinese final, all while attempting to pack seven months of my life into two 50 lb suitcases. But enough of the stressful things, let’s talk about food!

The wednesday after Margo and I returned from Shanghai we had a cooking class at a cooking school that trains chefs for five-star restaurants. We decided to walk to the cooking school since it was only a twenty minute walk away. The school was located in a dilapidated alley set to be demolished to make room for fancy new apartment buildings. As we rounded the corner into the alley we spotted a police car. Apparently police had been been stationed there for the last few weeks due to tension in the area (no one wants to be forcibly evicted from their homes). The issue with these new apartment buildings, much like the apartments I saw in Dazu, is that the people being evicted from their homes can not afford to live in the new apartment complexes, leading to an increased amount of homeless people and slums. While the families are compensated for their lost housing, much of the money is siphoned into the pockets of the city’s elite.

We turned the corner into the dilapidated alley, wandering along a cracked concrete street past brick houses with tin roofs. Eventually we reached the cooking school! The cooking school did not look sanitary, and was definitely not what I was expecting from a 5 star cooking school. But it’s China, and if the food is good and doesn’t make you sick does it really matter how it’s prepared? …Yeah that was a bad argument. But this cooking school has a claim to fame: Laura Bush took a class with them. It’s true, and her photo is everywhere.

We were met by a few five star chefs as well as two students about our age. They started off with a demonstration of hong shao rou, a meaty pork dish in a brown sauce. Hong shao qiezi, or eggplant in the same brown sauce, was one of my staples at the Tree Restaurant in Beijing. Hong shao rou is cooked with a large piece of pork, and cut into bite-sized chunks with the fat and skin still attached. In this dish, the fattier the better; it’s not really my style, but the dish itself is very good. The meat is cooked with onions and spices and left to simmer. After watching our chef, who spoke completely unintelligible, garbled Chinese, the four of us made our own hong shao rou. It was fun using the Chinese cooking tools that I had never used before. Almost everything in Chinese cooking is made over a hot skillet… which is rarely washed. I also had the pleasure of using huge butcher knives! At the end of our cooking experiment we decided to have a taste test. The chefs all tried our dishes and declared a winner. And guess what? I won! Maybe I found a new career.

We spent the rest of the afternoon watching and helping make various dishes. I got to hand roll soup noodles that looked somewhat like pasta shells as well as make my favorite dish: MAPUO DOFU (soft tofu cubes in a spicy red sauce). We decided to split it half and half: the girls would make mapuo dofu and the boys would make gong pao dijing (kungpao chicken- yes, it’s a real dish in China). Ji ding literally means chicken cubes, and gongpao is the sauce and style in which it’s cooked. Note: the more peanuts and green onions the better! The most entertaining part of cooking was that one young student would not let us do anything. Every time I tried to ground up my beef, or cut my tofu he would grab my knife and try and do it for me. Really? I tried to tell him that I didn’t want him to do it for me, but it took the
older chef yelling at him to back off. Regardless, cooking the tofu was fun, and I can now officially say that I have cooked with MSG! It tasted amazing in case you were wondering. I would love to try and make some mapuo dofu at home, but I’d have to find a recipe or something because everything was “a little of this”, “a little of that”.

Making my own Kungpao Chicken at a cooking class!

Mapuo Dofu, the love of my life