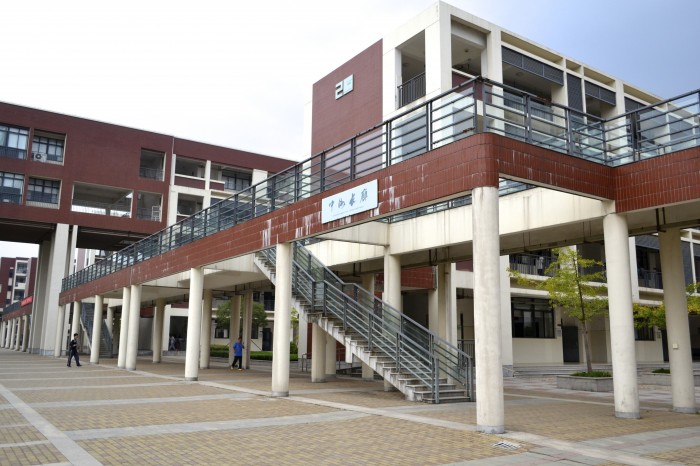 In my last post, I talked about my experience giving final exams and grades to almost 1,000 students. I also mentioned that I had to fail 2/900 of my students. This is the story of the student who earned a 14%.

I have a student in Senior 2 who can’t speak English. He has been learning English since 3rd grade and he can’t speak more than two words. He’s a “cool kid”; he almost never wears his uniform to class and he cracks jokes while I’m speaking. Mostly I just ignore him, or if he pisses me off enough, I call on him to answer a question in front of the entire class and watch him fail miserably. (Teaching brings out the best in me?)

Eventually, it came time for his class’ final exam. Like I mentioned in my last post because I don’t have most of my 900 students’ names memorized, I made them write their English names on the board and stand in front of them so that I could match a name to a face for grading purposes.

Why is this important? Well, during class there was a group that went to present and had more names written on the board than there were people in that group. When I asked who the student was, Mr. ‘Too Cool for School’ said: “Oh, sick, sick, sick!”. I eyed him suspiciously, and let the group continue. By the end of class, I realized that Mr. Cool Kid did not perform in any of the skits. Had he stood out a little less, I may not have noticed; but I definitely noticed him.

“What group are you in?”, I asked him after the skits were done. “OOOoooOO”, went the class. I eventually deduced that he was the “sick student”.

After class, I pulled him outside for a chat. Since he doesn’t know any English, I had to speak to him in Chinese.

“Since you refused to participate in the skit and lied about it, I have to give you a zero,” I told him.

“Okay, okay, okay”, he nodded his head, patronizing me.

“No. Not okay. You failed my class”

“How do you expect to go to college if you don’t even try? How do you think you’re going to pass the Gaokao???”

I wanted to punch him in the face.

“You’re going to end up picking recycling out of garbage bins for a living”, I told him as I stormed off.

That day at lunch I was eating with Lynn, the student in question’s English teacher. I told her the story of how he blew off my final, and she wasn’t surprised.

“Oh, HIM. He doesn’t speak English.”, she replied.

“But how does he get away with not trying?”

“I don’t call on him in class anymore”, she replied. “I just ignore him”.

“How the hell does he expect to pass the Gaokao if he doesn’t care about school??”

“Well, his dad owns a bunch of factories around the school so he doesn’t have to go to college.”

There it is. The painful truth.

“But… how does he expect to manage the factories???” I exclaimed. “He won’t know how to run them!”

“Oh, well he can just hire someone to do the work for him.” she replied.

“And his parents don’t care that he’s blowing off school???”

“I don’t know,” she answered. “Maybe his father didn’t do well in school and now he’s successful, so maybe they think that school isn’t important, especially English.”

And that, my friends, is the moment guanxi killed my soul.

For those of you that don’t know the term, “guanxi“ can be literally translated as “connections”, but it is much more than that. Guanxi describes the complex dynamic of personal networks and influence in Chinese society. Guanxi refers to the benefits gained from social connections, which are usually considered reciprocal. Guanxi can also be seen as a system of favors, the more you ask, the more you owe. Finally, guanxi is very important in business and hiring practices. It’s very common for employers to draw from close family and friends to fill positions.

The thing that really breaks my heart is that this student who doesn’t try doesn’t care and basically laughed in my face, will be much more successful than most of the other 900 students I teach. I think of Vicky, a student who emailed me telling me her greatest dream was to go to America, but that she’d never been able to afford even a semester of study abroad because her family is poor. She wants to be an English-speaking tour guide so that she can meet people from around the world. I think of Jason, who’s the biggest dream is to go to grad school in America, because undergrad is definitely not an option for him. How is it possible that all of their hard work, effort, goals, dreams, and ambition will be trumped by guanxi in the end.

While “connections” are definitely important in America, and money opens almost any door, it’s hard to explain how guanxi is different. I guess the main difference is that it filters its way down to the smallest aspects of society. If you want a job after college, a good major, work experience, and a high GPA will never be enough. While guanxi can open many doors, a lack of guanxi will slam doors in your face.

As much as I can’t stand the kid, the real person to blame is the father. By handing his son a future on a silver platter with no strings attached, he has single-handedly ruined his son’s education. By condoning bad behavior, he has created a person who will never work a day in his life, never strive to achieve anything, and will quite possibly run his father’s companies into the ground. While it sickens me to think of this student being comfortable and successful, I take pride in many of my other students like Vicky and Jason, who work hard to reach their goals. While I can’t make an impact on every student, and I will probably never change Mr. 14%*, I can inspire many of my other students to dream big, study hard and achieve their dreams.

*I gave the student a 14% because his group received a 56% for their script, which was multiple days late. The script was worth 25% and the skit is worth 75%, leaving him with a final score of 14%.

7 comments on “The 14% Student: Why Guanxi Kills My Soul”