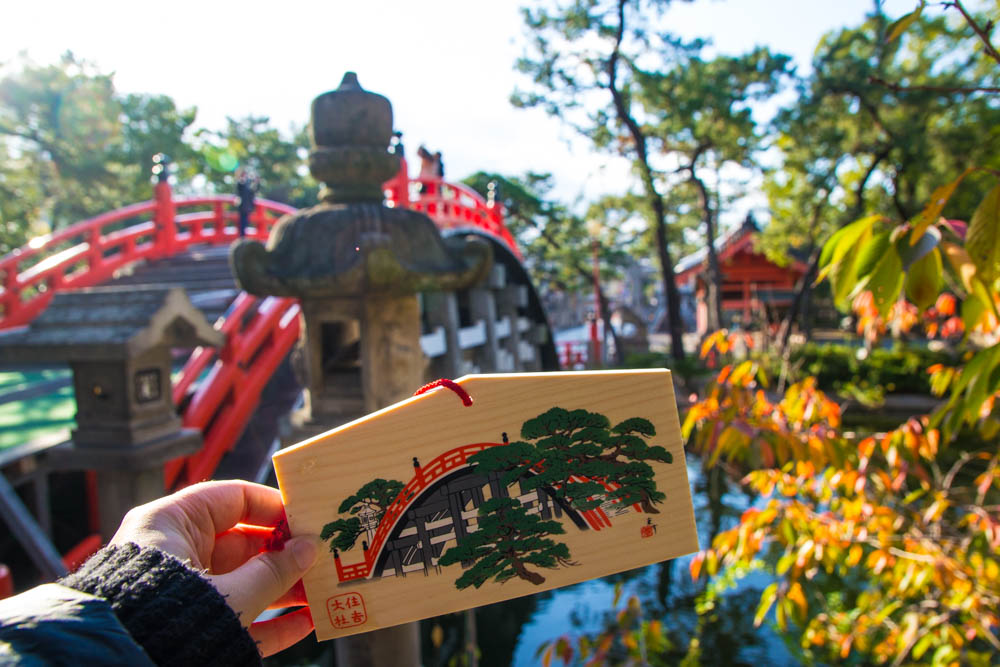 After five years of living in China, and two years of This Beijing Life, things have changed. I left my job as a college counselor in China, and now I’m living a life on my terms. I’m my own boss, I travel when I want, and live where I want. I’m FINALLY living my dream of location independence.

I hope you’ll all follow me along on my new journey: The Freedom Life. 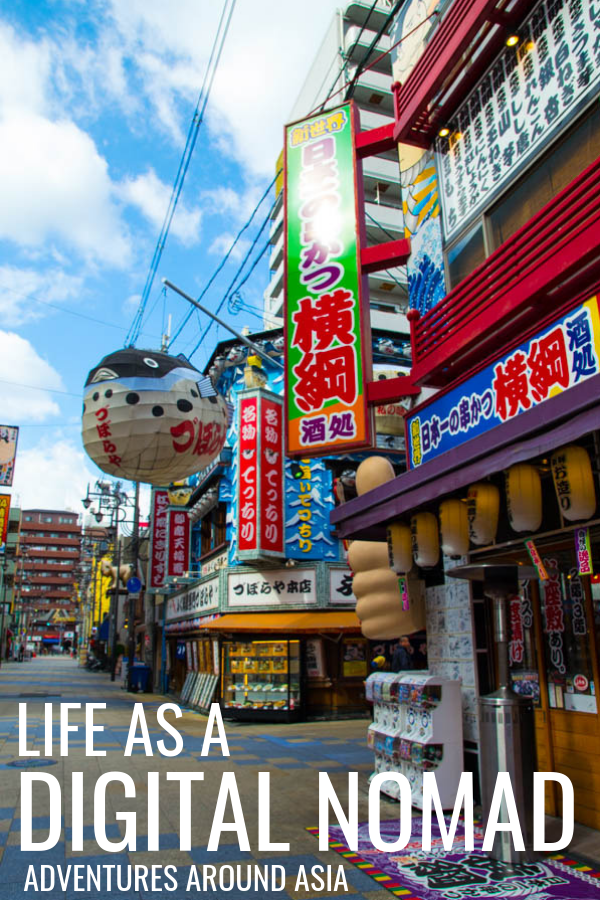 What I Was Up to This Month

This November I left Vietnam and moved everything to Australia… for approximately 3 days before I turned around and went to Japan for a week! I spent the last bit of November settling into Australia where I’ll stay for the remainder of the holidays.

Where I Was in November 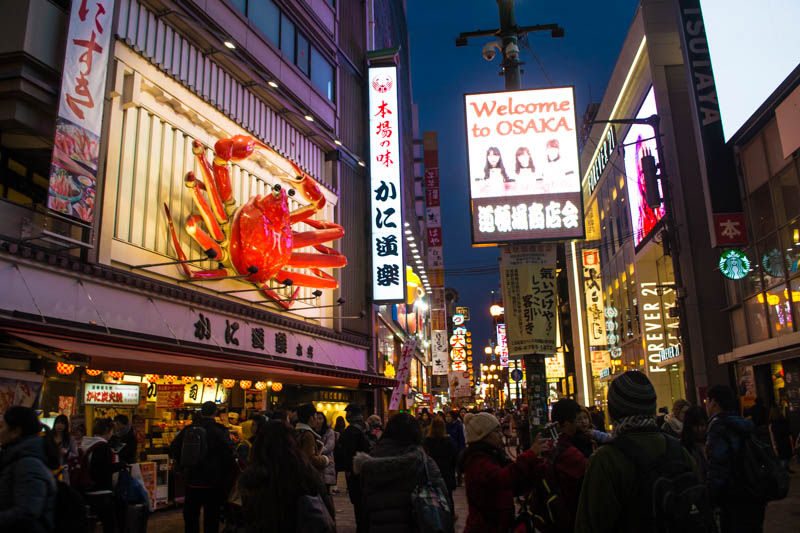 Some great things happened this month! Here are some of the highlights.

One Week in Japan!

Chris and I spent a week in Japan with the Kansai tourism board exploring Osaka, Kobe, and Sakai! I absolutely love Japan and I had a great time on this trip. I really can’t wait to go back and spend some more time there. A week isn’t enough! 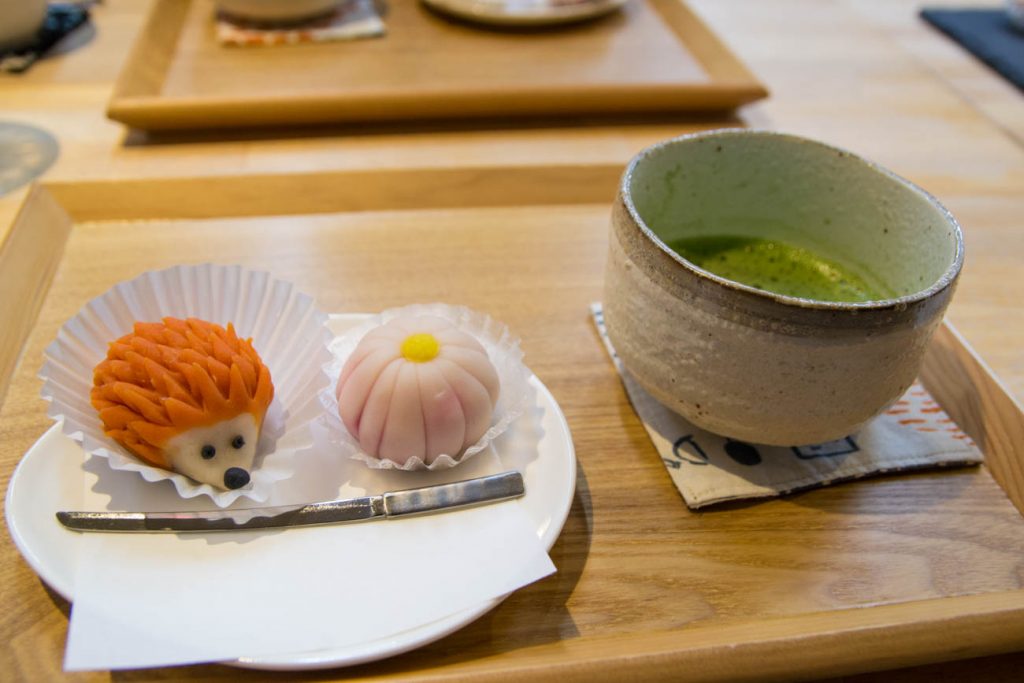 All of my favorite moments in Japan were the amazing hands-on activities we tried. In Osaka, we learned to make sushi in a woman’s home while she wore a beautiful kimono. We also did a samurai activity at Osaka Castle where we dressed up and fought the teacher with swords. 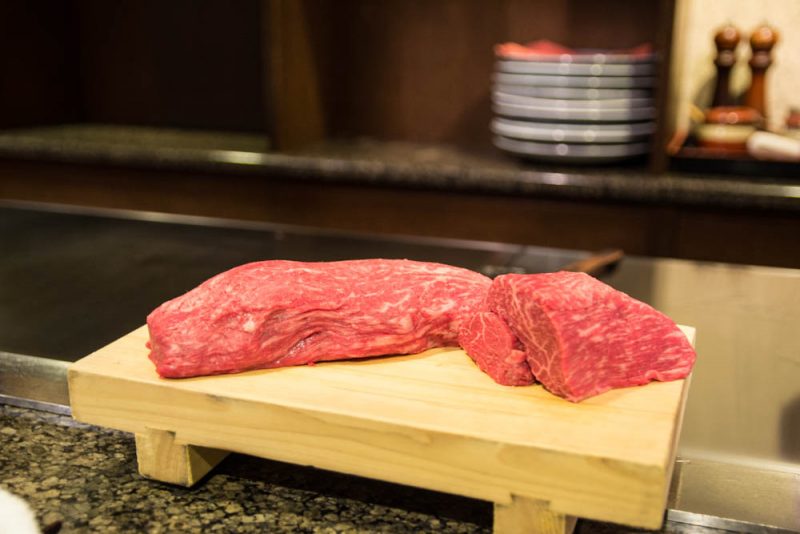 You can’t visit Kobe without trying the famous Kobe beef. Japanese food is incredible, but kobe beef really takes the cake! Seriously if you’re in Osaka, take a day trip to Kobe. Visit a sake brewery, head to the Herb Garden on the cable car, visit the Suraku-en gardens, and of course, stuff your face with some Kobe beef! 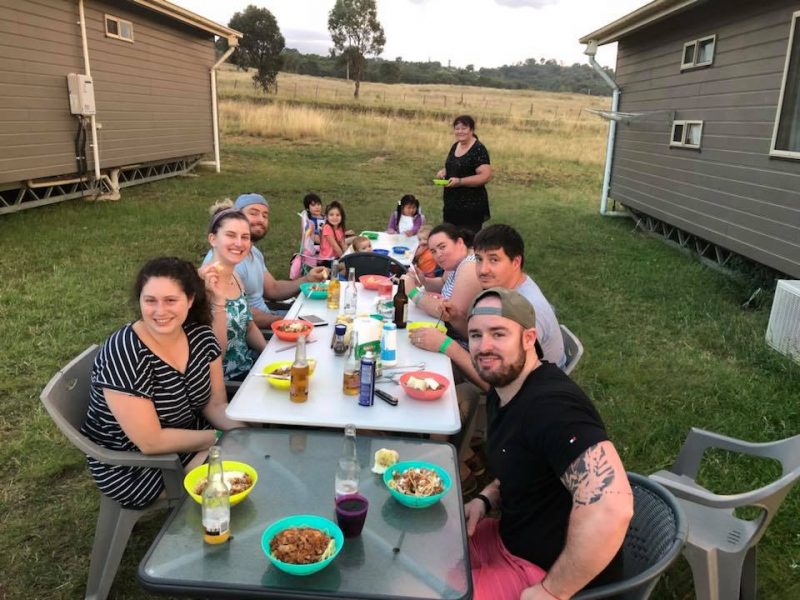 While I’m a bit sad to leave Hoi An, it has been nice to get settled in Australia. Buying Christmas presents, stocking up on healthy food, and spending time with Chris’ family have all been really fun. Sometimes it is nice to just go to a normal grocery store… 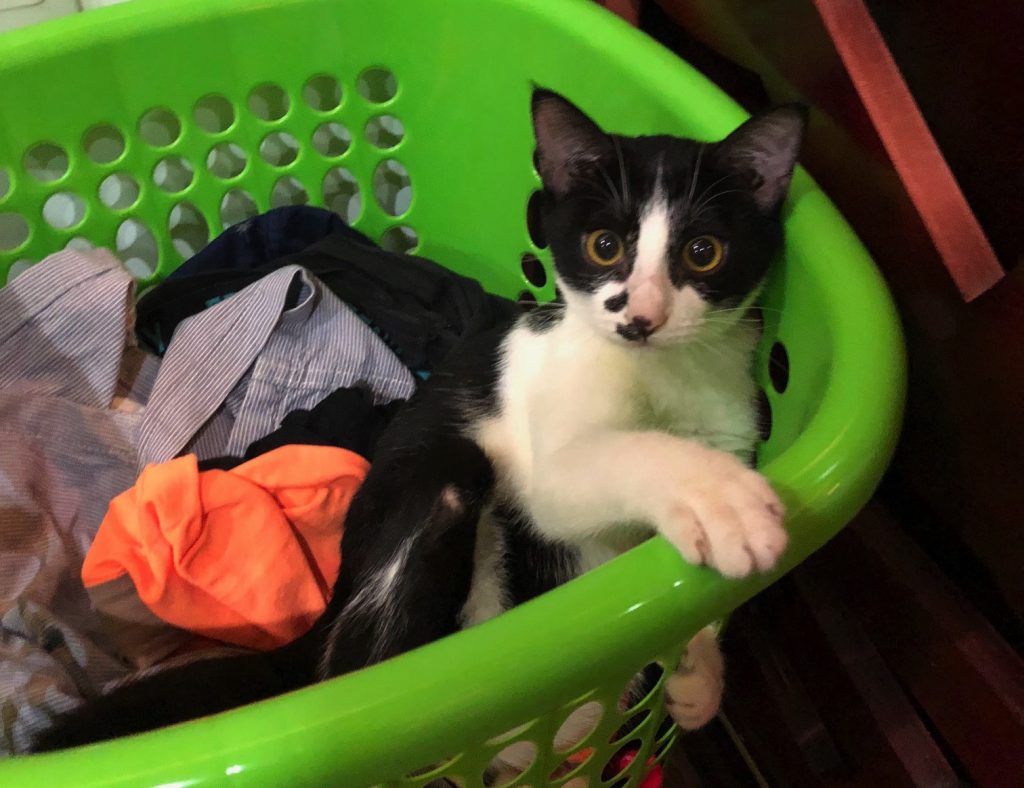 Saying goodbye to this little girl was NOT fun

Not everything was perfect this month. Here are some of the challenges.

Leaving My Kitten in Vietnam

As many of you know, I’ve been caring for an injured kitten over the course of the last few months. One of our friends’ landlords found her dragging a broken leg and took her in. While our friend agreed to keep her, he was traveling for a few months so we offered to care for her until we left Vietnam.

When we first got her, she was a mess. For almost a month she had a major diarrhea problem, which was made worse by the fact that her broken back leg rests right below her bum… She also wouldn’t play with any of her toys, and meowed incessantly if we weren’t holding her.

Over the course of the last few months, she morphed from a scrawny rat girl kitten (she actually smelled like a hamster) to the world’s craziest most playful kitty. Giving her back when we left Vietnam was actually heartbreaking, but at least I know she’s going to a good home. 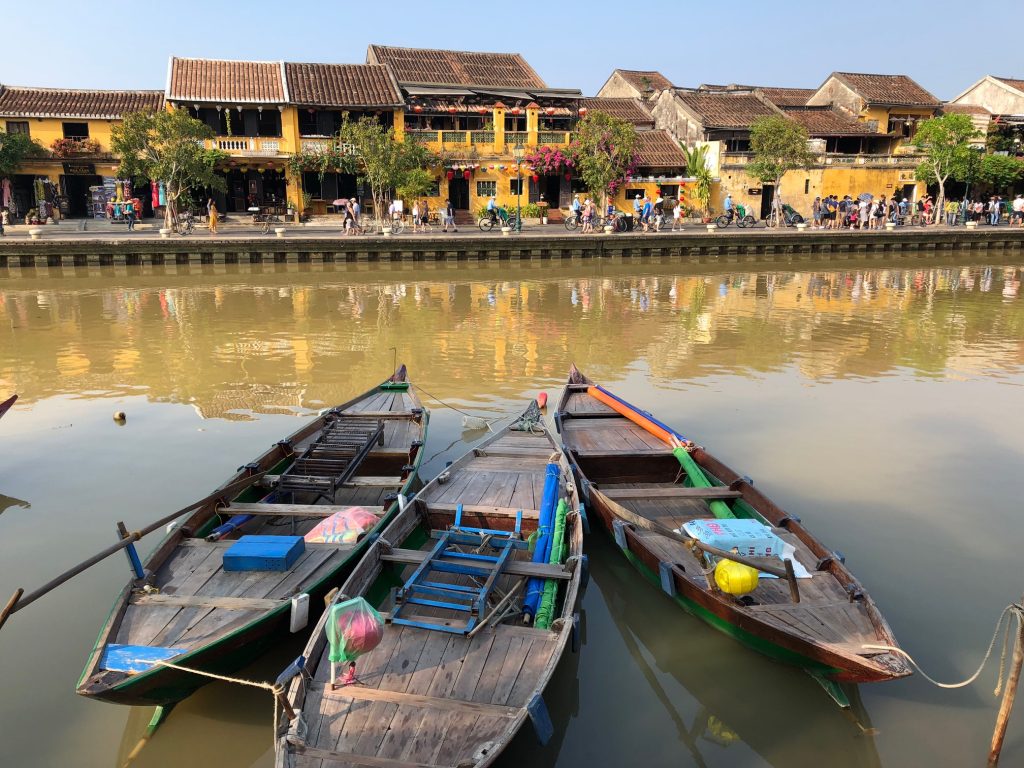 Leaving Hoi An in General…

In addition to leaving my kitten, I just wasn’t ready to leave Vietnam in general. There are so many things I didn’t get to do and so many restaurants I wanted to eat at one more time. I wanted to spend more afternoons at the beach and spend another afternoon wandering Old Town. I also just happened to meet a ton of cool people and discover a great dance scene in Danang RIGHT before we left.

While Ho An won’t be my forever home, I just wasn’t ready to leave. At least we’ll be back again next spring! 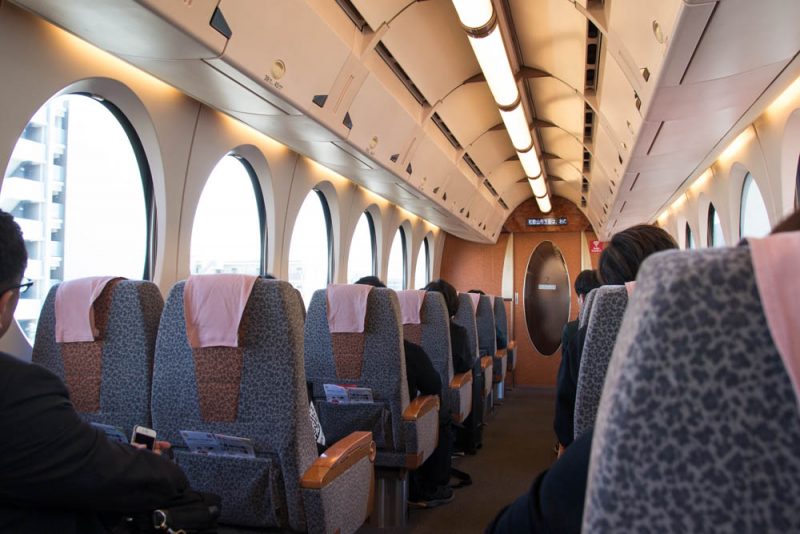 Yes, Chris and I seriously flew from Hoi An to Saigon to Sydney to Armidale, dropped off our stuff and then three days later flew from Armidale to Sydney to Singapore to Osaka and then immediately embarked on a busy press trip.

Then five days later we flew from Osaka to Singapore to Sydney, spent the night and took a NINE-hour train to Armidale (to save money).

WHAT WERE WE THINKING???

I mean it was great to be able to drop off our stuff and grab our winter clothes in Australia but wow… never again. 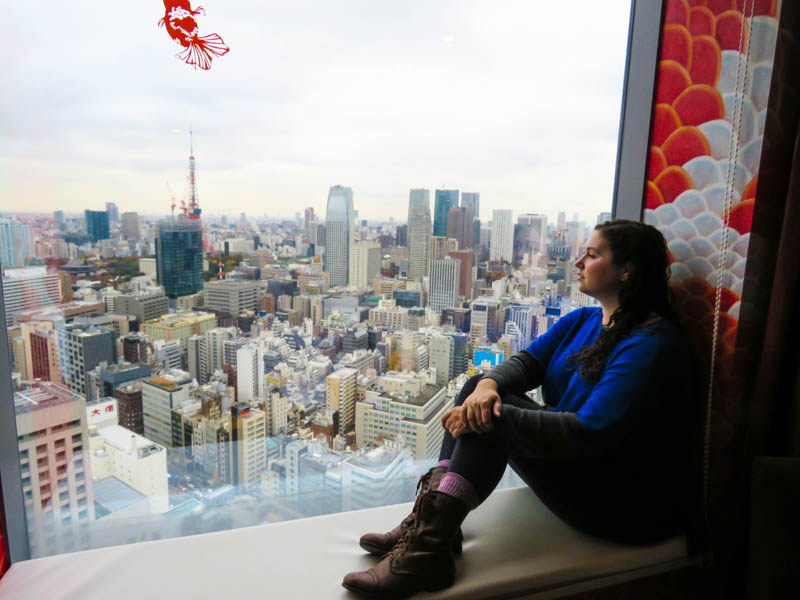 These boots KILLED me

I Brought the Wrong Shoes to Japan…

This Japan press trip was the most I’d walked since… well, the last time I was in Japan when I hiked 170km in two weeks on the Kumano Kodo.

That said, this time I brought basic flat boots, which have served me well in all my winter travels. However, this press trip was a bit hectic, and we ended up taking public transportation 90% of the time, which meant I was going full days without sitting down pretty much at all.

On the third day my feet hurt so bad that I actually started CRYING in front of some of the tourism staff which was super embarrassing… then one of them ran to the convenience store while we were touring a building to buy me basic shoe inserts.

After wearing hiking boots, tennis shoes, extremely comfy sandals and (super cute) crocs ballet flats for the last 8 months, I think my feet are too spoiled to go back to normal shoes again. I’m not wearing these boots ever again until I buy premium orthopedic insoles. Japan has officially killed them for me. 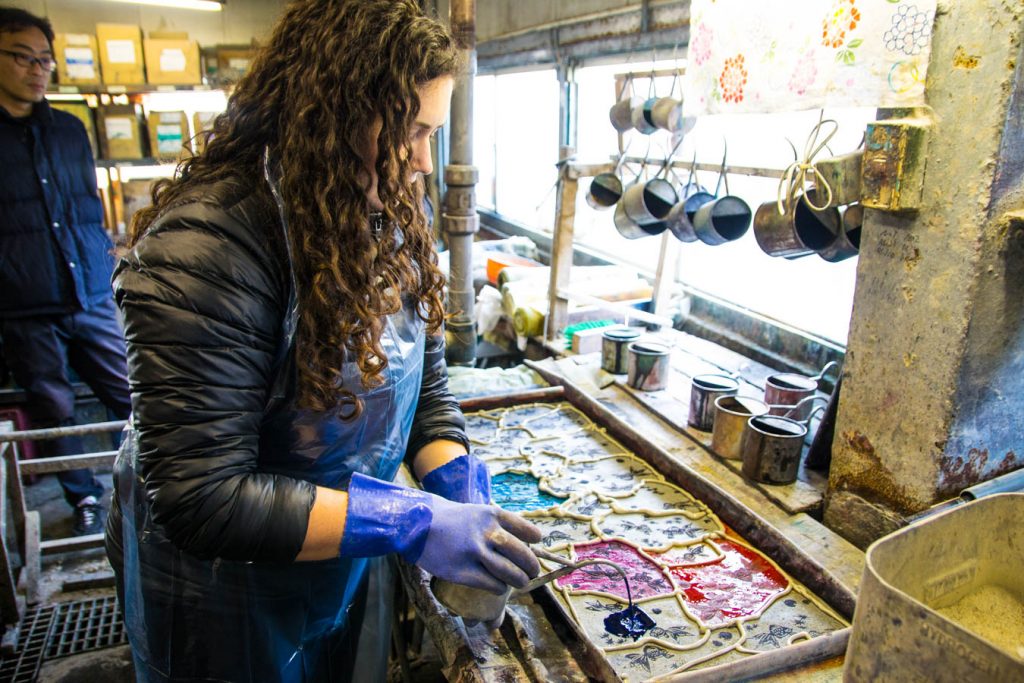 Making my own Japanese cloth pattern!

This week was definitely a win in terms of Affiliate sales, especially considering I had two big payouts that were on hold due to ridiculous Chinese bureaucracy (seriously I had to sign like 18 forms…). Unfortunately, my yearly Convertkit email server subscription was due last month which basically stole almost half of my earnings… so that’s cool.

What I Wrote in November

So, as you can probably see, last month was a bit hectic. I’ve also been revamping a bunch of old posts and optins, which has kept me super busy. Thankfully I have plenty of time to crank out a bunch of posts between now and the holidays!

Kawaii Sakai: A Girl’s Guide to Exploring Osaka and Sakai

My ideal day trip from Osaka! Rent a kimono, take photos at a beautiful Shinto shrine, participate in a traditional Japanese tea ceremony, and create your own cute Japanese sweets!

Here’s what I was up to earlier this fall! From launching my course to traveling around Vietnam with my parents.

That one time I made the cutest little hedgehog in Sakai… and then I ate him.

Yesterday I made the world’s cutest hedgehog dessert… and then I ate him. ✨ If you’re ever in Osaka be sure to take a quick 30 minute train ride to Sakai where you can learn to make the cutest Japanese sweets to enjoy with your matcha green tea! Then afterwards you can walk a few blocks to try a traditional Japanese tea ceremony in a tatami mat room where you even get to try making your own matcha tea! ✨ For now all of these things need to be organized separately, but I was wondering: if there was some sort of day trip tour where you could do both of these things while wearing a traditional kimono, would you be interested? I really want to make this happen!!

Who knew purple corndogs could be so popular? Just trying a sweet potato corndog at Universal Studios Japan!

Have you ever tried a sweet potato corn dog?? This purple snack was on sale at one of the Christmas-themed food trolleys in Osaka’s @unistudios Japan! On the outside is purple (possibly taro) flavored corn dog-esque bread and on the inside was a piping hot sweet potato. Perfect for the late November weather! What’s an interesting snack you’ve tried lately?

Travel Product I Can’t Live Without

Since the holidays are fast approaching, rather than give you one product I can’t live without, I figured I’d fill you in on my FAVORITE holiday gifts for travelers, just to make the Christmas shopping a little easier for all of you!

READ ME: 30 Perfect Gifts For Girls Who Travel

While I usually head to Mamahuhu for short comedic videos on life in China, I absolutely loved this longer guide to Shanghai! Not only does this video make me want to drop everything and head back to China, but it’s also opened my eyes to a city I’ve been to a million times, but never really loved. I guess I’ve been missing out on a lot in my short visits!

Oh, and don’t worry, Mamahuhu definitely inserts a lot of their signature humor in the video as well.

Here are my favorite blog posts of the month!

If You Take a Local’s Photo While Traveling, Do You Owe Them a Tip? – The Blog Abroad

This is a great conversation on the ethics of photography and something I’ll definitely be thinking about on my next trip!

Why I Decided to Leave Berlin – Be My Travel Muse

Kristin just decided to leave Berlin after 5 years, which is the same amount of time I lived in China! I always love reading about expat journeys, and why people decide to live in or leave a certain place.

WOW. I read Liz’s Instagram post about this but it’s crazy to read the full story. What a horrible feeling to see so many animals suffering without being able to help!

What’s it Really Like to Travel in Lebanon – Adventurous Kate

Well… time to add Lebanon to the list! Lebanon is a country you really don’t hear much about and I really love it when bloggers use their talents to promote destinations that could really use more tourism dollars. 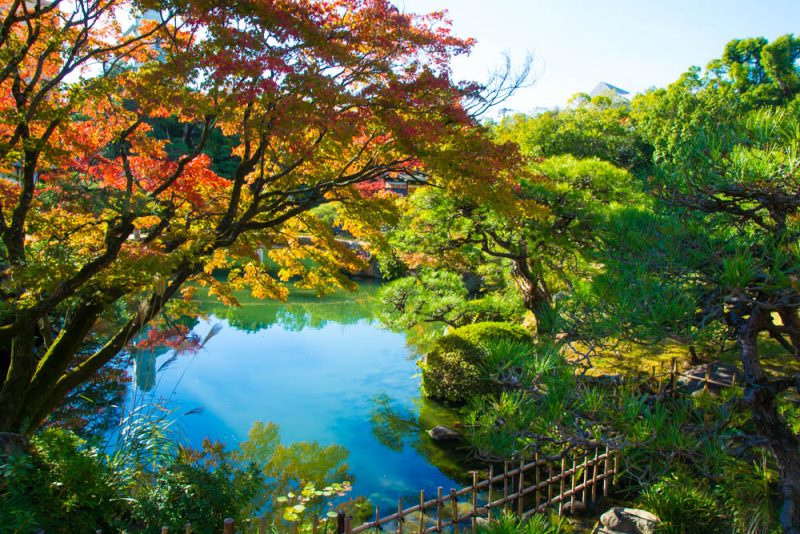 Wow this garden in Kobe was beautiful!

What’s Next for December?

There’s a lot of awesome things coming up in December! I’ll be in rural Australia with Chris’ family for the holidays, but I’ve also got a few other fun things planned. Chris and I will be attending an awesome music and beer festival, taking a trip down to Coffs Harbour and Bellingen for WEDDING PLANNING, and of course, we’ve got Christmas to look forward to!

Thankfully I’ve FINALLY (as of today) finished all the Christmas shopping… until I head to the US and meet up with my family.

What did you think of this crazy whirlwind of a month? Have you ever been on a crazy ammount of international flights like this? Let me know in the comments!