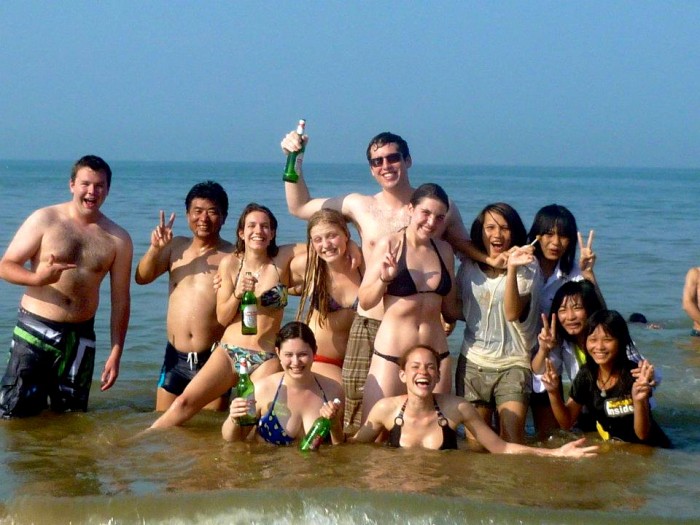 Now that I’m done with school and back from vacation, I thought I would finish off my posts about Spring Break in China! In case you don’t remember, my computer completely died at the end of my program in China, so I was unable to ever tell you about my awesome spring break travels. A few weeks ago I wrote about my first few days in Hong Kong and Macau, so make sure you check out that post first if you haven’t read it yet. Or, if you’re the type of person who likes to read magazines backwards, read this post first. I won’t tell you what to do.

The next morning we emptied our wallets once again, and took a cab back to the airport in Hong Kong. After a short flight we touched down in Hainan, otherwise known as “the Hawaii of China”. The group of us had wanted to go to Sanya, the main tourist city in Hainan, because there were many more things to see and do; however, two students from my program had already booked tickets to Haikou, a much smaller beach town. Alexis and Will begged us to stay with them in Haikou, rather than go to Sanya by ourselves, and in the interest of preventing the two of them from killing each other, we agreed.

Waiting for our bags, we jokingly wondered if the two had survived three days together, and stepped out into the hot sun to hail a cab. I knew I was back in China when the door to my side of the cab didn’t open. On our way to the hostel, we drove along the water past palm trees and small buildings. Surprisingly, the Mandarin speech, honking and lack of traffic rules made me feel right at home. It’s good to be back!

Eventually we made it to our hostel, Banana Hostel, recommended by Hosteling International. Our hostel looked like a large beach house, surrounded by tropical plants. We were met outside by a very enthusiastic Alexis and a sunburnt Will wearing an obnoxious Hawaiian shirt. Apparently, two days before we arrived there was a giant storm that flooded the southern part of the island. Grateful to have missed the storm, the six of us piled into the hostel and admired our spacious surroundings. Alexis and Will had shared a double for the last few days, but after our arrival, she moved into a 6 person room with the five girls who had been in Hong Kong, and Nate moved into the double with Will.

Alexis was a little excited

So was Will.. kind of

The girls walked up to our room, which, surprisingly, had four bunk beds- albeit one of the beds did not have a mattress. It was a dingy, somewhat spacious room, with a small bathroom complex of two showers and two toilets. We tried to turn on the air conditioning, but it was broken, of course. We changed into our swimsuits and met up with the boys in their double, which was extremely nice compared to our room, and they had air conditioning. Not fair.

Nate and I wanted to exchange some of our Hong Kong dollars for RMB, so the group went to get some beers for the beach while Nate and I headed to the bank. We were forced to wait in a ridiculously long line, sweating in the heat. Finally, after about twenty minutes of waiting, it was our turn; I tried to fill out a form in Chinese, struggling with the characters. I received little to no help from the woman behind the counter, who sat there staring into space as I struggled with the form. Apparently Nate’s woman filled out the whole thing for him, which is why he finished in half the time. I was disappointed to see that they took out a large fee for exchanging money, which was surprising because I always thought it was free to exchange money at a bank. Oh well.

After a good half hour, we met up with the group and headed to the beach! We split in half and grabbed cabs, loving the cheap fares. 20 minutes later, we arrived at an almost empty beach with pristine light tan sand and clear blue water. Immediately, we jumped in the water, which was the absolute perfect temperature: warm enough to swim in for hours but cool enough to be refreshing. We took a few photos, made some Chinese friends and played a few rounds of Chicken in which I was the ultimate champion. I say this individually because I played twice with Will and Nate as partners and won both times. The group of us rented a few lounge chairs and relaxed in the shade, listening to music and reading books (yes, Nate brought his kindle). The only thing that could have made the day more perfect was if we had sunscreen. Yep, that’s right, we only had one tube of sunscreen that Alexis had brought from America. The group of us couldn’t find sunscreen in Beijing before we left, and assumed we would definitely be able to find some in Hainan. The Chinese obsession with light skin ensures that 130 SPF sunscreen should be everywhere right? WRONG. Never assume anything in China.

Apparently, Chinese women prevent their skin from darkening by wearing long sleeves and long pants to the beach. Really? The few women that do swim wear either street clothing (I’m talking full-on jeans) or one piece bathing suits with skirts. I hate to say it, but we were kind of a spectacle in our bikinis, and random men kept trying to take photos of us while we were napping. It’s not that it is inappropriate to wear a bikini in China, it’s just a little uncommon, especially in a non-touristy place like Haikou. While the street clothing at the beach was a shock for us, the men’s apparel was much more surprising. All of the men at the beach wore either a tiny speedo or cotton briefs/boxer briefs. If any of you have ever seen wet cotton briefs… they don’t hold up very well (and that is all I’m going to say).

For your viewing pleasure

While we were relaxing on the beach, we saw a few Chinese men making a creation in the sand. As time went on, more and more people came to see the sand sculpture, so naturally we went over to look. These men were building a giant naked woman in the sand. Eventually the men found a bikini bottom for her to wear (god knows where they found that), and gave her cigarette nipples and a shell face. Interesting.

As the sun began to set, we headed down the road and found a restaurant connected to a fancy hotel. For about the same price we paid at the awful baozi place in Hong Kong, we ordered a feast complete with complimentary fruit! There’s nothing like a trip to Hong Kong to make you feel thankful for what money can buy in mainland China.

The next day we slept in and has a leisurely breakfast at our hostel, which served American style breakfast. A few of us ordered banana crepes, which looked delicious, while others ordered the full deal: toast, baked beans, eggs, bacon and grilled tomatoes. I was in heaven!!! We were also able to order coffee. It wasn’t that great, but after almost a week without it I was dying of happiness. There were also two cats that lived at the hostel, and I had a great time petting them <3

Eventually, it was time for us to leave for an excursion into a volcano! There was only one issue: I was insanely sunburnt. Everywhere. My chest hurt the most, and it was impossible for me to wear a bra, so I had to wear a loose tank top with nothing underneath on a hike. It was extremely awkward. We resolved to scour Hainan for sunscreen that evening, and headed out with the bit that was left of Alexis’ on our faces and took a cab to the Haikou volcano.

I was a little disappointed that the volcano isn’t active, seeing as I live in the one state in the continental US with an active volcano (Washington!). But that volcano is the type that explodes, and this volcano was a lava volcano, so I was still excited, hoping to see some lava formations.

After a long cab ride, we made it to the park and began to wander. The first thing we noticed, besides the extreme heat and humidity, was the English signs. Remember how I said Yunnan is the king of Chinglish signs? I lied.

If you ever want to “employ the narrator” or “treasure the geological monuments”, this is your place.

Besides crazy signs, there isn’t a lot to see, besides panorama views of tropical forest; although you can hike inside the volcano, which is pretty cool.

After a long day of hiking and sweating, we eventually found a restaurant with large fans overhead, and I ate some of the best papaya I have ever eaten in my life. We earned it.

That night we went to the grocery store to find some sunscreen and aloe. If I haven’t mentioned this before, all beauty and toiletry sections of supermarkets have a ridiculous amount of women employed to help you purchase the most expensive beauty products the store offers, while working on a commission.. of course. As soon as we entered the beauty and toiletries department of this store, all 50 of the attendants started screaming “hong hong de!!! hong hong de!!!!”, which basically means “Oh my gosh they’re SO RED!!!!!”. I KNOW CHINESE PEOPLE DON’T GET SUNBURNED. No need to rub it in.

Immediately they pounced on us, offering us an array of whitening creams and ointments at ridiculous prices. Eventually we found a tiny packet which contained travel-sized tubes of whitening sunscreen, whitening lotion, and some form of blue aloe. While this sunscreen was enough to cover maybe my face for one day, and came at a ridiculous price, I was so sunburnt there wasn’t any other option. I forked over the cash while fifteen attendants pointed as my sunburn and giggled.

Next Up: The best story I have from China thus far “That one time I ran a Chinese jungle 8k while wearing a dress.”

*Some of these photos have been stolen from Hannah Lee

in the “corridor of amusing rocks”

3 comments on “Volcanos and Sunburns in the Hawaii of China”