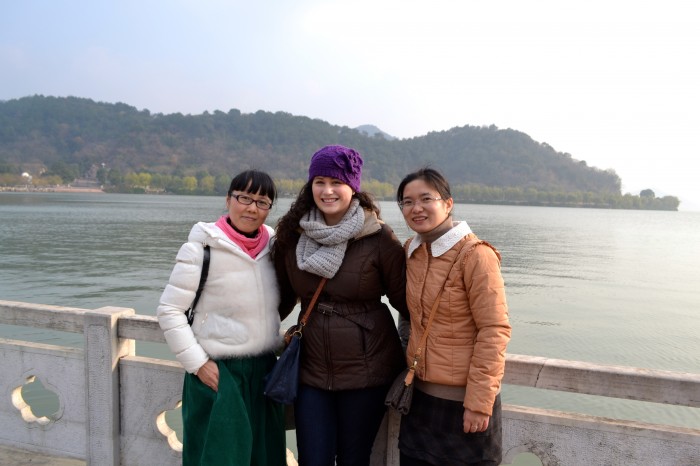 Last Thursday I received a text from Lynn:

“Will you meet us at the front gate of the school after class about 11:15 so that we can go to the buffet together.”

Apparently the school had rearranged all of Friday’s classes so that the female teachers could all go to a buffet together. I have no idea where my school is getting the money for all these buffets, banquets and special gifts, but I’m not complaining.

After a tiring morning of teaching, I headed to the gate for the banquet. We drove for about 15 minutes to a fancy hotel in the “New City”. The banquet wasn’t quite as good as the previous one for the English teachers, but the sashimi was amazing.. and ice cream is always good.

I sat at a table with all the young female English teachers who I normally hang out with: Lynn, Lora, Catherine and Vivian. As much as the group of us has become friends, I’ve been a bit bothered by the amount that they speak Ningbohua (Ningbo’s dialect) in front of me. Whenever Catherine is in the mix, they at least make an effort to speak in Mandarin since she is from Northern China, but they still speak so quickly it is impossible for me to keep up with their accent. I either have to try to squeeze my way into the conversation, or sit there like I don’t exist. Every week these teachers will sit next to me during lunch and then completely ignore me. I’ve also completely stopped getting invites to hang out or have dinner. It’s starting to feel like my novelty has worn off and I’m now an inconvenience.

I’ve put up with these feeling for a while now, but at Women’s Day I couldn’t ignore it anymore. After lunch another teacher came to join our table who doesn’t speak English (very well). The conversation switched to Chinese, as expected, and I sat there in my own thoughts sipping on my coffee. Eventually they started playing a game on their phones. Through watching and asking questions I eventually discerned that every person received a text with a word. Everyone had the same word except one person, whose word was slightly different. None of the players knew whose word was different except the “judge” who acted as moderator. In turn, each player would have to say a hint to their word in an attempt to figure out whose word was different. The aim is to work together to beat the “judge” by discovering who has the different word.

After a solid half hour of watching the game, I realized that a lot of the words were really easy, like primary school vs. high school or Hunan province vs. Henan province, so I asked if I could play.

“I think I understand enough to play” I countered.

“Do you know these??”, she showed me the characters on her phone.

“No.. I guess not”, I admitted, looking at the obscure characters.

When I brought the idea up to the teachers they basically laughed in my face.

“But this one is a famous Chinese author. You wouldn’t know!”, Lora explained.

“She must be so bored”, the new teacher laughed in Chinese.

I was furious. I made it pretty obvious that I wanted to be included and I was basically laughed at. It would have been so incredibly easy to include me; it would have taken a little bit of translation and maybe skipping some of the categories I didn’t know. I don’t know famous Chinese authors? Let’s just skip that one and move onto the next one. But instead, I was laughed at and excluded for almost an hour. Women’s day? More like lunch with a bunch of catty, insensitive teenagers. The whole experience was just so incredibly rude, I couldn’t even wrap my head around it.

When I knew they either weren’t getting the hint or didn’t care, I finally asked:

“When are you guys heading back to school?”

Of course. They wanted to play up the lunch break as long as possible so they wouldn’t have to go back to work.

“No. No bus.”, they kept laughing and playing, ignoring me and my obvious frustration with their rudeness.

I couldn’t take it anymore. “Okay, well I’m not going to sit here for another 45 minutes while you play this game without me, so I’m going to take a cab home”, I said in an ice-cold voice.

I grabbed my purse but hesitated in my seat for a second, waiting for them to feel bad and offer to include me.

Really?! I threw my purse over my shoulder and stormed out of the room. I was so angry I started crying in the elevator. How could they treat me like that? They know how hard it is for me to live here in the middle of nowhere. I’ve told them about how I expected to live in the city, and that I was upset by how isolated the school is. They know I’m lonely and bored and they don’t care.

The entire cab ride home I just wanted to revel in my anger but unfortunately my cab driver had other plans. He told my I was beautiful probably 18 times, asked me if I had a boyfriend more than once, told me I looked Russian because Russians are beautiful, and then asked me if I wanted a Chinese boyfriend, and told me that if I married a Chinese guy I could live in China forever. Yes, because that’s exactly what I want right now.

The more I thought about that moment at the banquet, the angrier I was. A part of me wants to hope that it’s a cultural thing, but I have other Chinese friends who have never treated me like that. The thing that really frustrates me is that I know how easy it is to include international friends. Senior year I was an exchange student orientation leader, and I became friends with a lot of the exchange students in the process. While a lot of the exchange students’ English was perfect, many of them struggled so it was necessary for me to slow my speaking and use a basic vocabulary. While it was a bit more of an effort to communicate, I never minded because I enjoyed hanging out with the international students and learning about their lives and world views. Sometimes I’d get carried away and speak too quickly, but all it took was a reminder to slow down or a confused expression and I’d rephrase.

The other exchange student orientation leaders and I also used to play a card game called Cards Against Humanity (adult Apples to Apples) with some of the exchange students. It was a game full of pop culture and phrases international students may not know, but we helped explain any cards they didn’t understand and let them re-draw. This way they got to hang out with us and play a really fun game, while learning about American pop culture at the same time. If I could play Cards Against Humanity with students from Italy, Argentina and Egypt, the Chinese teachers could definitely play a simple word game with me.

What frustrates me most is that I actually considered two of the teachers, Lynn and Catherine, to be my friends, and now I’m not so sure. Is my friendship too much of an effort for them? Has the novelty worn off? I understand that they’re married and that most of them have babies, but the least they can do is make an effort to talk to me the few times we hang out. I already feel like a social pariah as it is. I eat almost all of my meals by myself, I watch tv on my computer every night, I do all of my errands by myself.. I do everything by myself. I normally only hang out with people one night per weekend… if that.

One of the main silver linings of living in the middle of nowhere is that it forces you to make Chinese friends and practice Chinese. But whenever I hang out with the teachers at my school they either ignore me or only speak to me in English. How am I supposed to have Chinese friends when they all reject me as an annoyance? How am I supposed to get off the computer when there’s nothing to do and no one to see? Just when I thought I was making a home for myself, I feel more isolated than ever.

It’s been exactly a week and I haven’t talked to any of them except Lora who texted me about work stuff. I feel awkward reaching out to any of them after the way they treated me, and I’m not sure where to go from here. Many of the teachers have helped me out when needed; they helped me set up a bank account, buy train tickets online and order stuff off Taobao, but then treat me like I don’t exist when we’re all in a group. Do I confront them or let it blow over? Do I pretend like it never happened, or proceed with caution? I still haven’t figured it out yet. For now, I just plan on being awkwardly lonely and disappointed… at least I have House of Cards to keep me company.