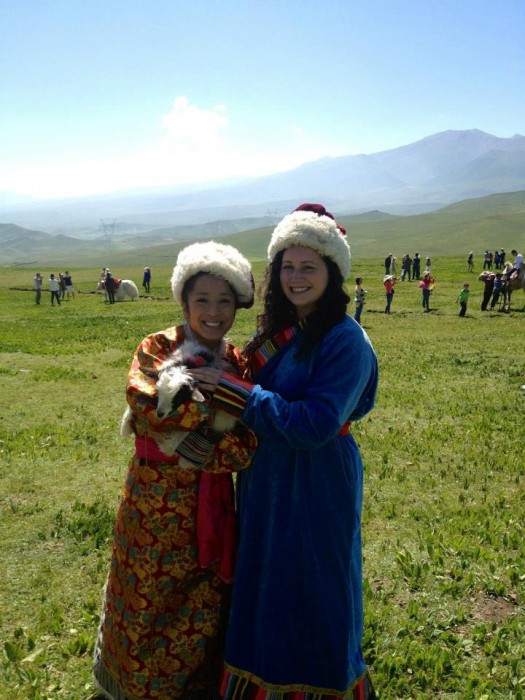 Sorry for the small hiatus, I just spent the last week in Guilin and Yangshuo for the National Holiday, the Chinese equivalent of the Fourth of July.. but they get a whole week off. It was absolutely beautiful, and I had a great time! For now, let’s just add that trip to the long list of posts I have to write. But since the raging typhoon left most of our streets flooded, I have the day off so I figure I’ll try and get a little caught up.

The next day in Qinghai, Yoko and I spent the afternoon wandering around a famous outdoor market that consisted of two streets: a souvenir street and a food street. After deciding that the Tibetan souvenir shops were overpriced, we spent most of our time on the food street, sampling Qinghai’s famous spicy noodles. We also spent most of the day visiting various stores selling shoes, purses, etc. I ended up purchasing a beautiful jade ring at a mall booth that was well worth the price!

One interesting aspect about the market was that I was literally the only non-Asian person there. Xining is a large city on the way to Tibet, so I expected to see a few expats or foreign tourists, but I was the only foriegn-looking person we saw all day. Every time I took photos or spoke to people in Chinese, their faces would light up. While I’m used to standing out in China, I’ve never been the sole white attraction. Even more interesting was the fact that people didn’t believe Yoko when she said she was American. “You don’t look American!” they would exclaim. “Is your family Chinese??!”. Yoko’s family is Japanese, but because of political tensions, she didn’t necessarily want to advertise her heritage. “Oh my family is Asian but I was born in America.”, she would say. Most people didn’t push it much further, but when they did she would say things along the lines of “oh… many different countries, I don’t know…”

After a long day of bargaining we met up with Joe at the hostel who had just arrived. After taking him out for his first genuine Chinese meal, we called the driver that our American friends recommended (you know, while we were waiting for Yoko’s suitcase at 4am) and planned an excursion to Qinghai lake, the most famous site in all of Qinghai.

The next morning we woke up bright and early, surprised by how cold it was outside. We hopped in the car and took off for the three-hour drive to Qinghai Lake! The driver was a friendly woman in her thirties that only spoke Chinese, so Yoko and I spent most of the

cab ride translating for Joe. On the way to the lake the driver took us to a valley full of Yaks!! If you recall my post, Friendly Yaks and Heart Attacks, I mentioned that I would die of happiness if I ever got to pet a yak. WELL, not only did I get to pet a yak, I got to RIDE ONE. For the small price of 30 kuai (less than $5 USD), I got to dress in traditional Tibetan clothing, ride a yak and hold what I thought was a baby yak (it was actually a baby mountain goat). The costume was made of velvet and genuine yak hair, and the baby goat was so snuggly and cute I wanted to take her home! In the mountains of Songpan, I only saw smaller black yaks, but these yaks were white and HUGE. Apparently white yaks are used for their fur, while black yaks are cultivated for their meat. As much as I love yaks, I had no problem scarfing down some yak noodles for lunch a few hours later.

After frolicking in the meadow, riding yaks, petting baby goats and playing dress up, the four of us hopped in the car and continued to Qinghai Lake.

It took us a while to get there because our driver, while safe, may be the slowest driver in all of China. When we first arrived, I was somewhat disappointed. The water was swampy around the edges with a very distinct smell, and there were hordes of Chinese tourists. Once we continued away from the swamp shoreline towards a rocky land bridge, I began to appreciate the lake’s famed beauty. The water was crystal clear and sparkled in the bright sun.

After almost being crushed trying to buy tickets, we eventually boarded a ferry to take us to a sandy island. Once on the ferry it felt like I was on the ocean- the lake is huge! Qinghai lake is the largest lake in China, spanning 1,700 square miles (4,500 km2) as of 2007, and it’s still growing! While only 1/7th the size of the smallest great lake, it felt like sailing through the ocean somewhere in the Caribbean with the harsh sun and crystal blue salt water.

Eventually we reached a sandy island filled with Chinese children splashing in the waves. After wandering the shore, we walked along a path towards “sandbeach entertainment area” and “offering sacrifices to the sea”. There was a long line for a shuttle, but we decided to save our kuai and walk.

I offer the others as tribute

It was a very long walk, and after about 10 minutes we were boiling under the sun. Soon we came upon a rest stop selling luke-warm water. We rested in the shade along with a few Chinese tourists, relaxing our tired feet. In a lull in conversation, Yoko and I overheard a group asking one of their friends what we were saying. She responded with “I don’t know, their accents are hard to understand”. Yoko, Joe and I then launched into a discussion about what kind of accented English she was used to hearing. British English? Or maybe she was so used to hearing only Chinese people speak English, that she couldn’t understand a genuine English speaker. In my best accent I said quietly “A Chianese Engalish is a best Engalish”, and immediately a Chinese man sitting across from us burst into laughter. “You can understand us?!!”, we asked in Chinese. He nodded his head, laughed some more, and went back to his steaming hot tea. Whoops.

After taking a rest, we walked the rest of the way until we found a touristy Tibetan temple ground full of flags and shrines. While it was obviously staged, it looked beautiful on the beach with the waves in the background.

After a long day of exploring, the altitude finally began to affect us. We hadn’t realized that the lake is was much higher up than the city, jumping from 7,000 to 11,000 feet. We didn’t feel any of the effects of the altitude in the city (except for the one time Yoko and I ran to catch a bus), but after a full day of walking in the sun, our heads ached, and no matter how much water we drank, we were still dehydrated. I was also a bit sunburnt from how close we were to the sun: a good lesson to wear sunscreen the rest of the trip.

While we were absolutely exhausted, we knew that in less than 24 hours we’d be on the train to Tibet!