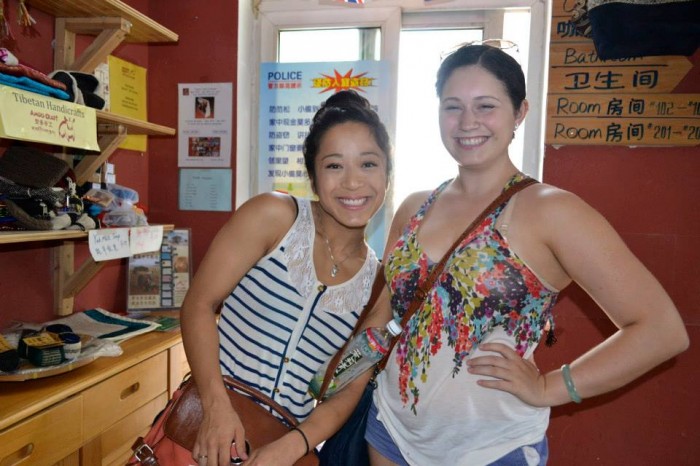 After a crazy day of shipping all of my things from Beijing to Shanghai and Ningbo (except for my Rick Steve’s travel backpack) Yoko and I were off to Xining, Qinghai!

Qinghai is a large province north of Sichuan and east of Tibet and Xinjiang. The whole province is situated on the Tibetan Plateau and has a very sizable Tibetan population. Many travel guidebooks and sites suggest stopping by Qinghai for a few days to adjust to the altitude on the way to Tibet; which makes Xining, Qinghai’s capital, a very popular destination for those enroute to Tibet via train. Xining is at an altitude of 7,500 ft (2,250 m), while Lhasa is about 11,500 ft (3,500 m)! My one friend who took the train straight from Shanghai to Lhasa (2 days!!) had horrible altitude sickness, so my group made a very conscious decision to reduce our susceptibility. This meant no caffeine after leaving Beijing. I’m from Seattle and I love my coffee, even shitty Chinese instant coffee. It was rough.

Yoko and I caught an evening flight from Beijing to Qinghai on possibly the most rickety plane I have ever been on. With all the turbulence, I actually thought the plane was going to fall apart. We arrived around midnight, exhausted and alive, and hopped on the airport shuttle bus to the city. We were the last to board the bus as it was about to leave (because we were confused and walked by it twice, of course) so we were forced to sit in the last row, which was slightly elevated. The lengthy ride to the city was crazy! It was pitch dark and Yoko and I had to grab the seats in front of us to keep from falling out of our own! The bus was raging through potholes at ridiculous speeds while Yoko and I panicked trying to figure out which stop we were supposed to get out at, while trying not to throw up. The stop name the hostel listed on their website wasn’t an option, so we had a pretty interesting time asking the people around us where we should go.

Finally, it was our stop.. or we thought it was at least. It was about 1am at this point and the streets were completely empty. We found a cab in no time, however, and made our way to the hostel. As we pulled up to the hostel street, another man hopped in our cab and the four of us worked to discern where the hostel was. Eventually we found it, and scrambled to get out of the cab so that they other man could get home. Yoko grabbed all of my things, which were crammed in between us because only her tiny suitcase could fit in the trunk. The two of us lugged all of our things inside and up to the top floor.

We booked a four person room in Lete Youth Hostel, a cute garden-style penthouse hostel with a cozy lounge and horrible showers. We were surprised to find that we were the only ones in our room, and began getting ready for bed.

“Richelle.”, I turned to see a look of panic on Yoko’s face. “I think something’s missing.”

My immediate thought was “Oh my god my camera bag!” Yoko had grabbed my backpack, purse etc as we were getting out of the cab in a hurry while I grabbed my giant travel backpack. “My brand new DSLR and lens!!!!” I thought as I scanned the room in panic. But no, my camera bag was on the floor, along with my purse and my small backpack.

All of Yoko’s clothes and shoes for the whole month, along with her medication.

The two of us rushed upstairs to reception and told the man at the front desk what happened. We hoped that maybe the color of the cab would help identify the company (it doesn’t), or that the cabs were all owned by the city (they’re not), or that there were only a few possible cab companies in Xining we could call in the morning (nope). Since we didn’t ask for a receipt and didn’t know the name of the company we had no way of tracking the driver.

We assumed he would probably find the suitcase that evening when he dropped the car off with the company, and resolved to google and call as many companies as we could in the morning. We went through the worst case scenario: We would have to buy new clothes and shoes for Yoko the next day, and we would ration the medication she had on-hand.

After falling into a dead sleep the two of us awoke to a knock at our door around four in the morning. It was the hostel receptionist who told us the cab driver had returned with Yoko’s suitcase! He told us the cab driver was a “bad person” and was demanding 200 yuan for his trouble. 200 kuai? That’s about $30 USD- MORE than worth the panic of having to buy all new clothes and ration medication. The two of us threw on sweaters and ran outside into the chilly air, where we met a small group of Americans heading to the airport. The cab driver spent about five minutes yelling at Yoko about the trouble he cost her, demanding 200 kuai, which she was happy to give him. The hostel receptionist encouraged her to look through her suitcase to make sure nothing was stolen, and everything was there, even the boxes of rings she had bought for her mother. Whew! Yoko paid the driver, while I chatted with the other Americans, who recommended a few restaurants as well as their driver.

Relieved, Yoko and I thanked the driver and the hostel receptionist profusely and made our way back inside. Once we made it back to the room, Yoko admitted feeling bad that she didn’t give the driver more money for returning the suitcase. A few minutes later she realized she forgot to check inside the boxes for the rings. She opened the first box and a ring was missing! But upon opening the second box, she realized that he had merely gone through her things and put the rings back in the wrong boxes. Guess the 200 kuai was easier than trying to pawn jewelry?

After a long and crazy night, we had Yoko’s suitcase. Crisis averted! Let’s just say we slept in pretty late the next morning.

Yoko and I celebrating our good fortune the next morning