I sat on a row of stone steps, watching the sun rise behind one of the most magnificent temples in the world. How did I get here? Never in a million years did I think I’d ever see Angkor Wat at sunrise. 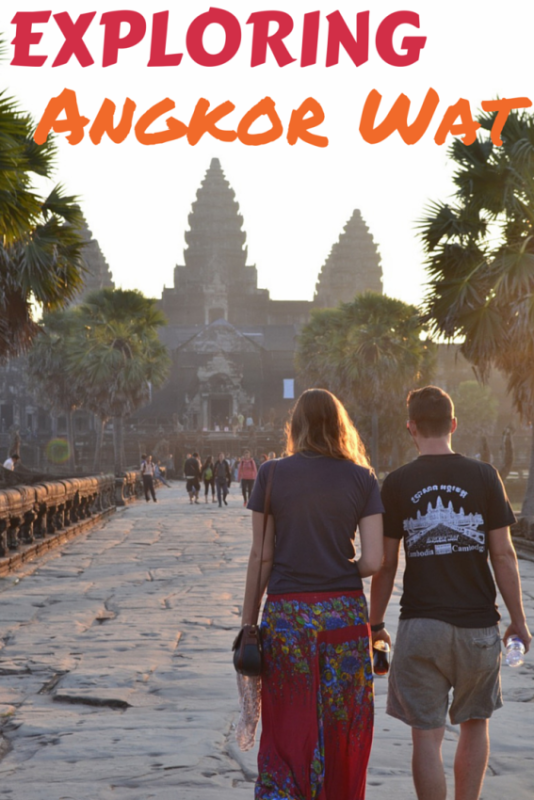 Here I am at twenty-three, curled up in my genie pants, clutching my DSLR, almost accidentally checking off one of the more exotic items on everyone’s bucket list.

A few years ago I don’t know if I could even tell you what country Angkor Wat is in, let alone imagine myself visiting. Cambodia is dangerous isn’t it? Who even goes to Cambodia? Apparently a lot of people do, including me.

Sitting on those stone steps, I almost had to pinch myself. I’m in Cambodia watching the sunrise over Angkor Wat. Who says that? Who does that? It’s funny how much has changed over the past few years. Sometimes I just sit back and think “Wow. This is my life?” 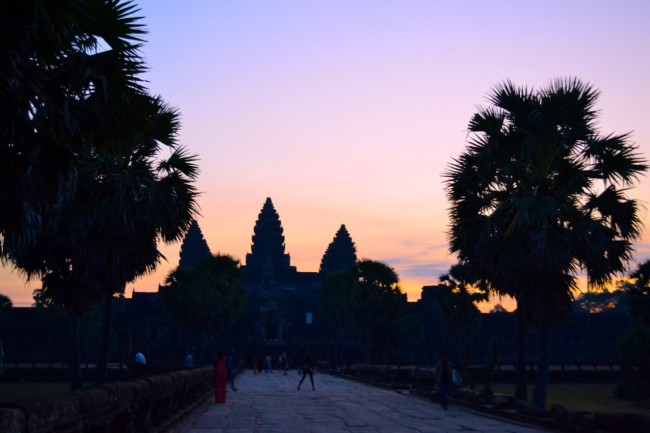 Our tuk tuk driver picked my friends and I up at 4am and we rode through the dark chilly night to Cambodia’s most famous temple. My friends and I waited in line for overpriced coffee, which we used to wake ourselves up and warm our hands. We then continued on towards the temple, as the sun was just beginning to peak over the horizon.

Angkor Wat at sunrise is a bit crowded, but definitely not as bad as I was expecting. I do live in China though, so when someone says “crowded” I expect the worst. While it’s hard to get a shot without people in it, I found a place to quietly wait and watch the sunrise. When the sun was fully above the horizon, the crowd of people slowly drifted off to explore the massive temple complex. 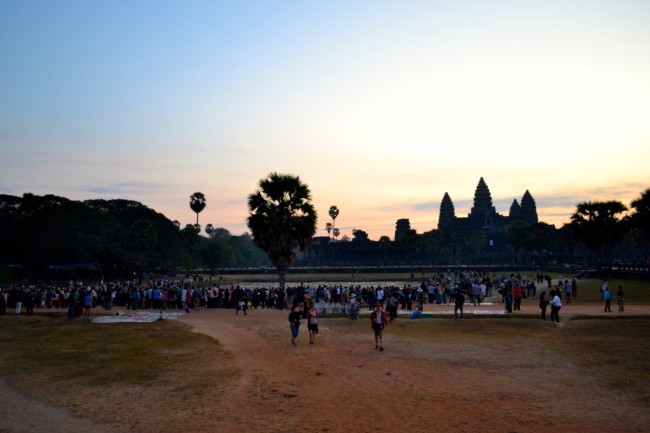 This is nothing compared to China

Angkor Wat is a photographers dream, with intricate carvings, hidden alcoves and a towering structure you can climb (if you wear appropriate clothing) to get views of the entire complex.

I spent hours wandering the grounds, taking photos and trying to eavesdrop on other people’s tours. After talking to a few others who went on a tour, I think I missed out by not having a guide. I would have loved to learn more about the history to better appreciate the temple.

While we’ve all heard of Angkor Wat, Angkor is so much more than its most famous temple.

The Khmer Empire ruled over most of southeast Asia, lasting from 800AD to the 15th century. The great capital Angkor emerged around 900AD, leading to the 11th century “Golden Age”. This Golden Age led to the creation of Angkor’s most famous temples. First Angkor Wat, and then Angkor Thom and the many other temples including Bayon, Ta Prohm, and Bantaey Kdei.

In the time of the Chinese empire to the east and great Arab empires to the West, Angkor was the seat of power in Southeast Asia. Eventually the empire began to decline in the 12th century. Scholars think this may be due to the transition from Hinduism to Buddhism, leading to a loss legitimacy for the Khmer emperors. In this time, no new temples were erected and the empire’s complex water irrigation system fell into disrepair, possibly leading to famine and political unrest. Eventually, the kingdom fell under the Thai Ayutthaya empire in the 15th century. 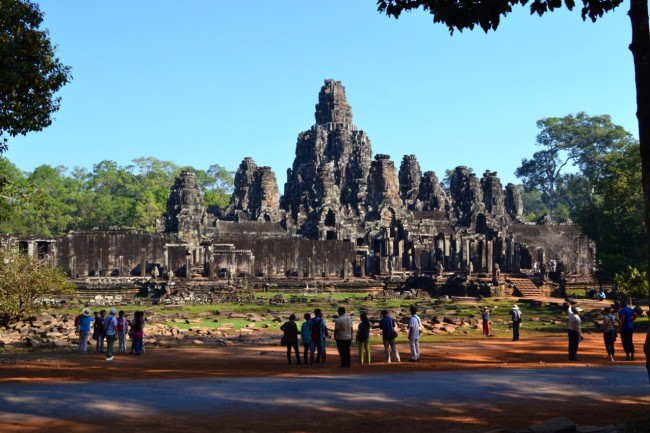 A bit smaller than Angkor Wat, Bayon is commonly referred to as “the one with the faces” because the temple contains giant stone faces throughout the entire complex. I honestly thought Bayon was a bit more interesting than Angkor Wat. Unfortunately, it was extremely crowded when we arrived, which made it harder to fully appreciate the temple 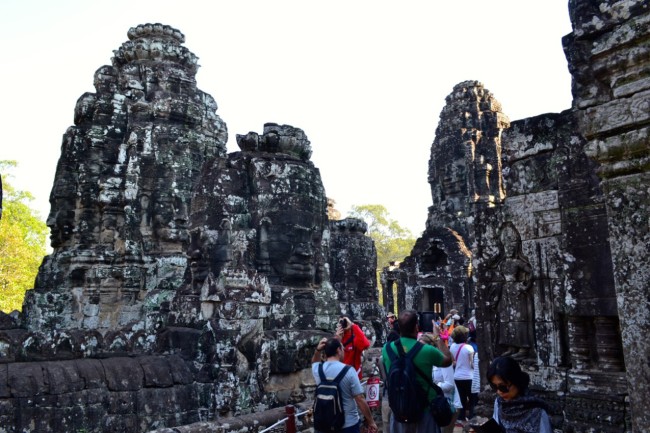 The trick I found is actually wandering around the outside of the temple once you get overwhelmed with the crowds. You can fully appreciate the exterior, and the giant face carvings without getting pushed and shoved while struggling to take a picture.

Commonly known as the tomb raider temple, or “the one with the trees”, Ta Prohm is famous for the invasive trees that have taken over the temple. Featured in the movie tomb raider, this temple is the third most popular of the bunch. I also really enjoyed this temple, and found the crumbling walls covered in giant tree roots very fascinating.

I always pictured this temple to be way off the beaten path, completely empty in the middle of the jungle. Unfortunately, this temple is right in and amongst the main complex, making it very easy to visit (and very crowded). It’s hard to appreciate the history and natural phenomenon whilst battling it out for photos with giant Chinese and Japanese tour groups with megaphones. 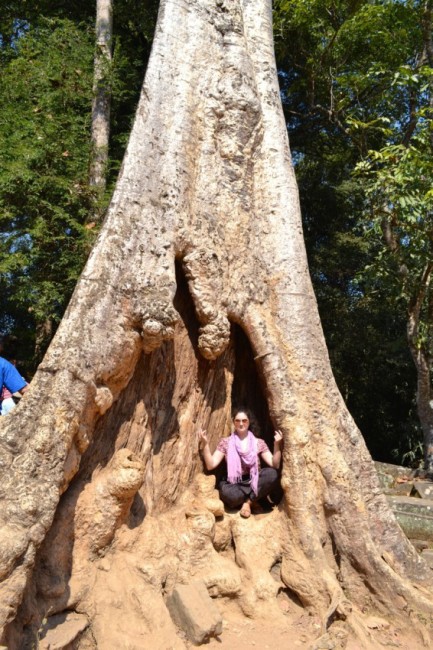 That said, both Ta Prohm and Bayon are really interesting and well worth the visit. Just be prepared for the crowds so you’re not disappointed when you arrive. You can always get a multi-day pass and visit these temples in the early morning before they get crowded.

Angkor Wat was a bit better in terms of the crowds, mainly because the complex is huge and a lot of the tour groups don’t arrive until a few hours after sunrise. The small groups, families and couples spread out amongst the complex, making it easier to explore and admire the temple on your own. 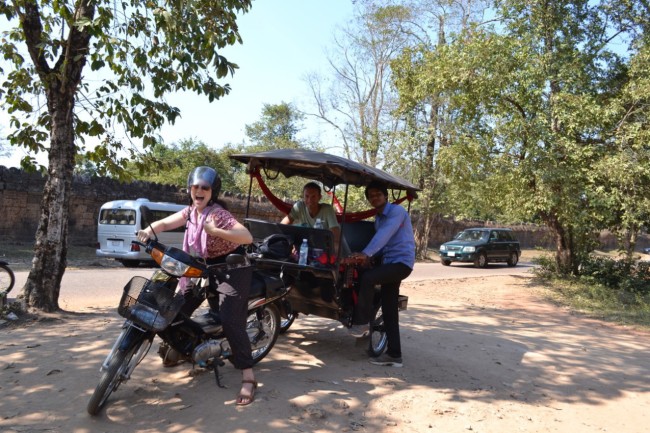 How to Get Around

Most people do a day-long tuk tuk tour of Angkor Wat, Bayon and Ta Prohm. My tuk tuk tour included a few other temples in the area, lasting from 5am-5pm. We could have paid a bit extra to stay for the sunset, but we were so exhausted by the end of the day, we were happy to head back. This was including our hour break after lunch where we took a nap in hammocks. 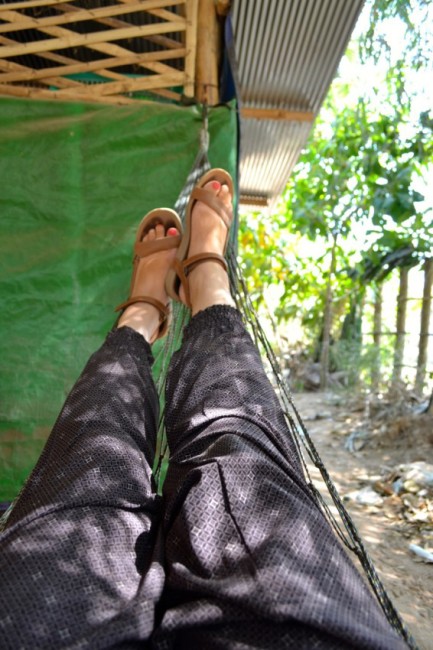 Random Story: My friend Analucia actually found our tuk tuk driver on Facebook. He even has his very own Facebook fan page! We decided to make it our mission to bring this young man fame. Our driver was really great, and is actually a college student trying to save up money for his studies. He even let us do a photoshoot with his tuk tuk!

You can also hire a tour guide to drive you to all of the temples. While it’s a bit more expensive, I’m a huge history buff and I would have liked to know more about all of the temples besides what you can find on Wikipedia. 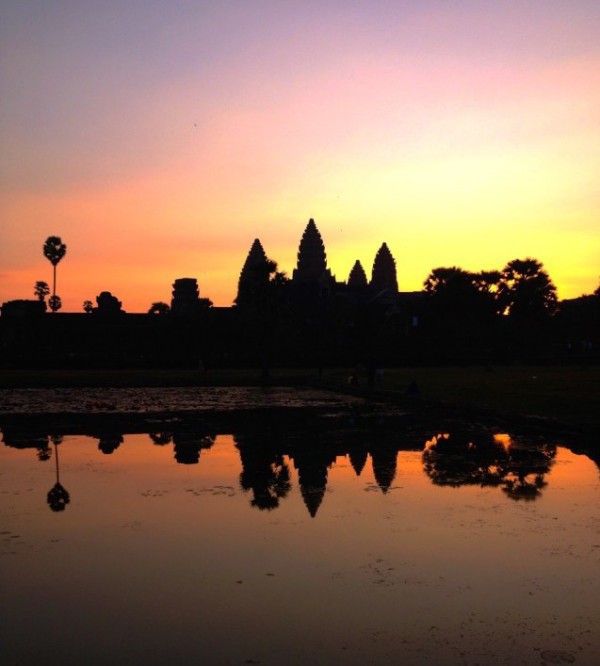 I may have boosted the colors on this a bit…

So… Should I go at Sunrise?

Let’s be honest: I’m not a morning person. I have never and will never be a morning person. The thought of waking up at 4am (when I went to bed after midnight the night before) just to see some sunrise doesn’t really appeal to me.

Well, I did wake up at sunrise, and I can tell you that yes, it’s worth it.

To be honest, the sunrise isn’t all that spectacular. Any photo you see has been edited (including mine) to make the colors a little better. It’s also a bit crowded, so it’s hard to get a photo without people in it. 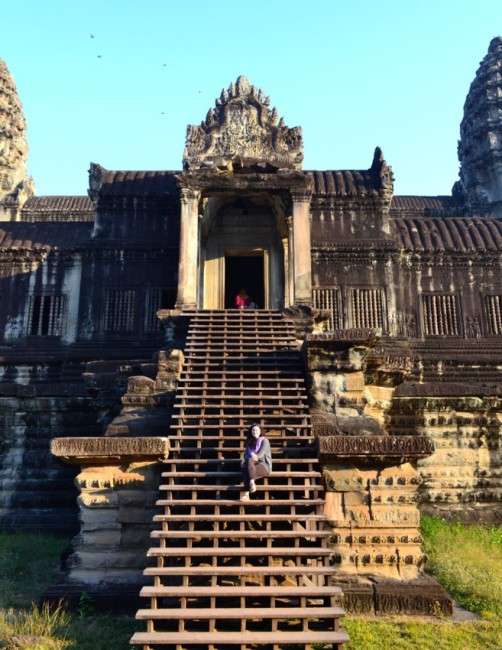 “Wow, that sounds shitty, why the heck should I wake up at sunrise??”

I would say the experience of waking up for the sunrise makes the lack of sleep worth it. Piling into a tuk tuk with like-minded travelers at 4am, riding in the dark, clutching a hot cup of coffee. The anticipation is part of the fun.

The sunrise is also oddly peaceful. Everyone stands quietly, watching the sun peak over the horizon. I found a nice spot on the steps of a nearby ruin, and watched silently as the sky lit up. It was a wonderful morning.

Such a peaceful morning

Once the sun is up in the sky, the small groups of tourists slowly drift into Angkor Wat. None of the tour groups have arrived yet, so you’ll avoid the large groups with megaphones.

To be honest, I thought Bayon and Ta Prohm were more interesting and unique than Angkor Wat, but I enjoyed Angkor Wat the most. The main reason is that I could appreciate the temple without being jostled and could wander, taking photos and admiring at my leisure. This is partly because I was there so early, but also because Angkor Wat is huge. 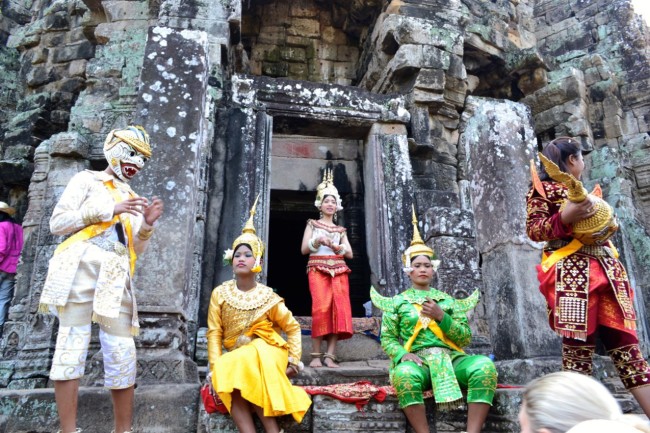 I ended up buying a three-day pass because I thought I’d want to go at least two or three times, especially since there are many other temples far away from the city. But after a full twelve hours of temple exploring, I was pretty “templed out”… in a good way. Most other people I met felt the same.

There’s no need to spend all of your time on Angkor Wat. There are plenty of other things to do in Siem Reap, like zip lining, enjoying the nightlife or exploring cute cafes outside of the backpacker area. 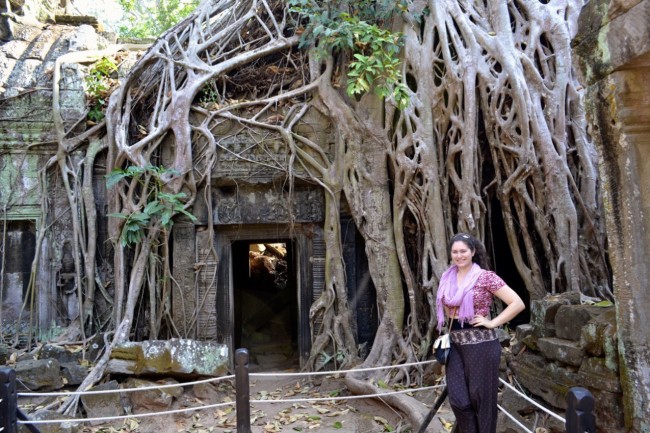 To make the most of my ticket, I decided to go to Banteay Srey and Kbal Spean, which are about an hour tuk tuk from the city. I really enjoyed the trip and I’m glad I went, but to be honest, the three-day pass is the same price as buying two one day passes, so I could have just done that. 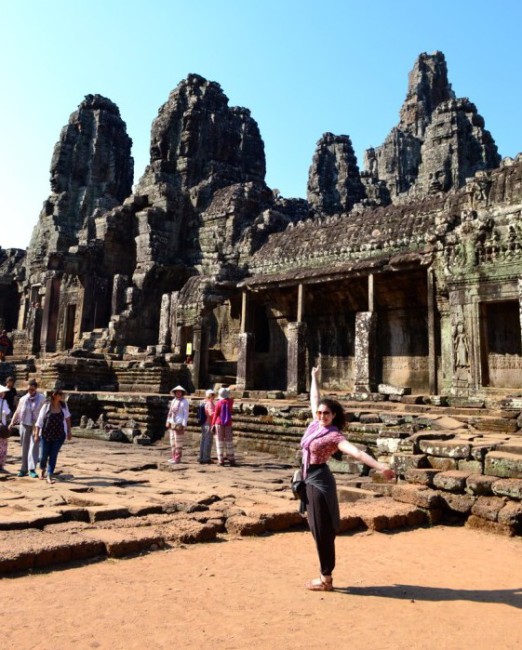 What (Not) to Wear

Angkor is one of the more conservative destinations when it comes to clothing. Be sure to fully cover your legs and shoulders. While a sarong skirt may work for the majority of the temples, you will not be allowed to ascend to the upper level of Angkor Wat. Most people wear the loose “elephant pants” to keep cool, and a short-sleeved t-shirt. Be sure your t-shirt has sleeves, because a tank top and scarf won’t cut it.

Guy can get away with wearing knee-length shorts, but girls should try to fully cover their legs. If you’re going at sunrise, be sure to bring a sweater because it’s a bit chilly! You can always leave it in the tuk tuk when it gets hot. 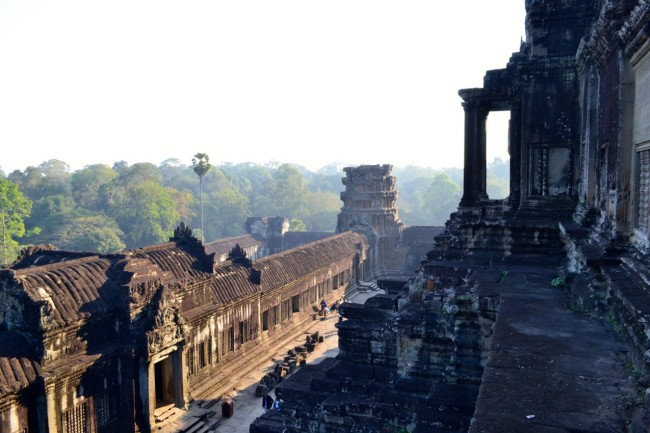 You don’t want to miss out on going up here!

I stayed at Angkor Wonder Hostel, and it was very nice and quiet. It’s walking distance from the backpacker area, but not so close that you’re kept awake at night from all the noise. My friends stayed at Garden Village Guest House, which I actually preferred to my own hostel. The 25 bed dorm is only $4 a night but it’s huge and spacious!

As always, Mad Monkey is also a great choice but book early because it fills up right away!

For those looking for a nice place to stay, Agoda has the best affordable options in Siem Reap.

Sunrise at Angkor Wat was always on my dream bucket list. What’s on yours?