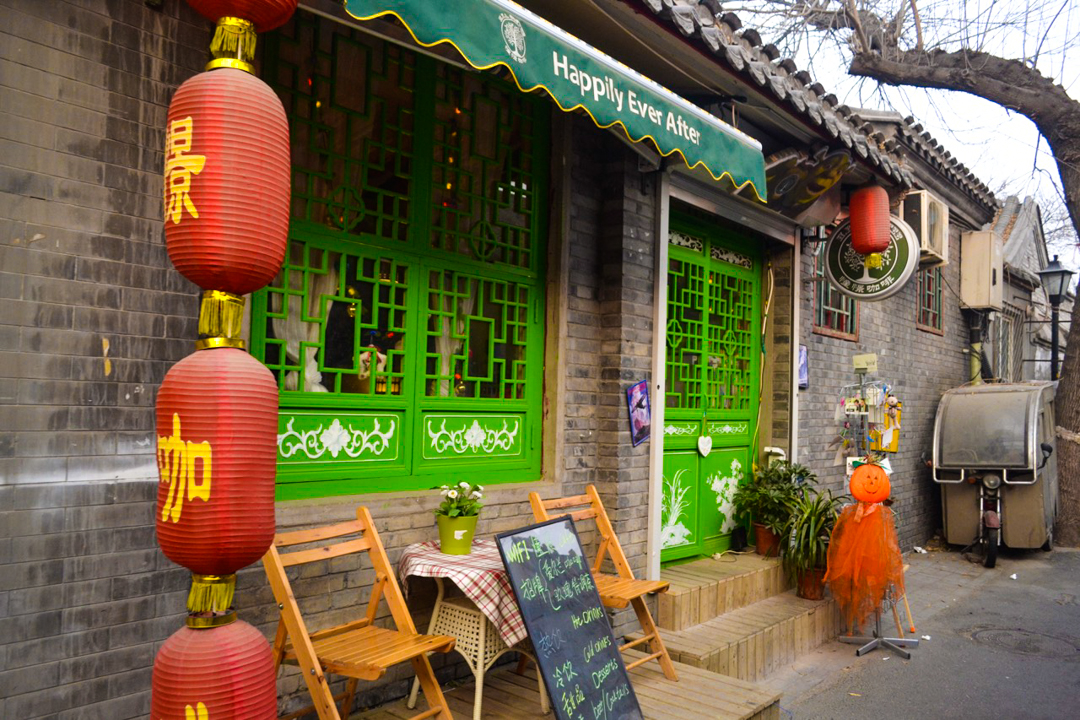 As we all know from my monthly recaps, I’ve been having a hard time getting out, meeting new people, and having a life outside the office. I guess it’s pretty hard to have work-life balance when you work 9 hours a day 6 hours a week. Who knew?

Finally one afternoon when I was lazily daydreaming out my office window, procrastinating on the essays piling up in my inbox, it hit me.

A night out in Beijing’s hutong bars was exactly what I needed. 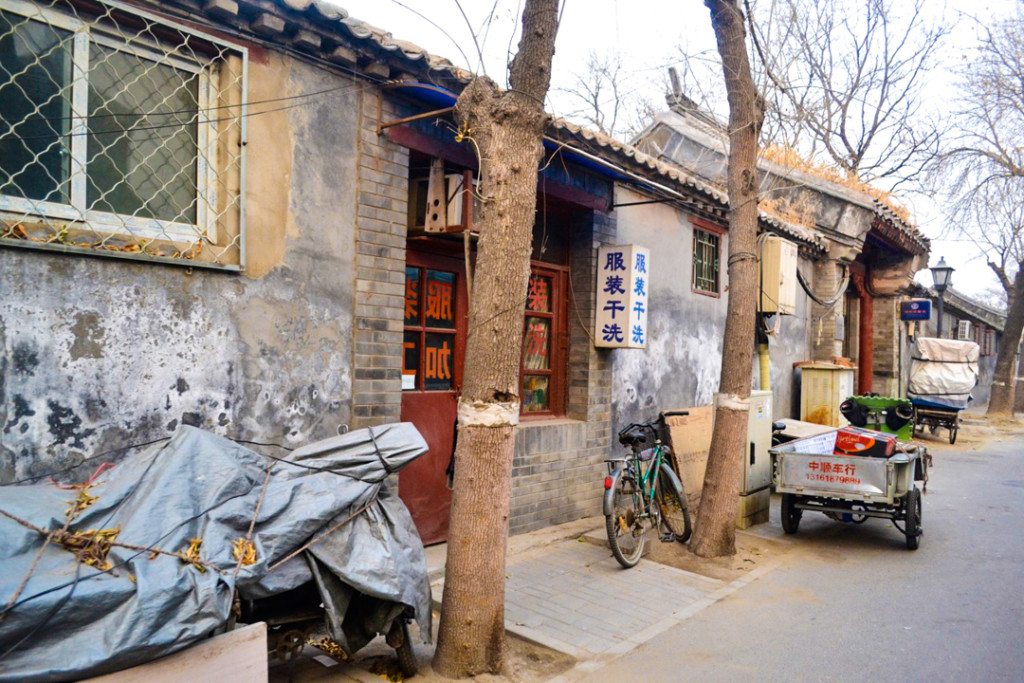 What the Heck is a “Hutong?”

A hutong is a neighborhood full of traditional Chinese courtyard homes, most commonly found in Beijing. While Mao had most of these neighborhoods torn down, there are many large areas filled with hutongs you can visit. Take a tour and learn the history, wander down one of the many hutong shopping streets, or even live in a refurbished hutong like Joella from Paper Crane Stories!

One of the absolute coolest expat things to do in Beijing is to visit one of the city’s many hutong bars. These bars are usually located down residential alleys, somewhat hidden from plain view. A lot of these streets are walking-only and some of the bars are all but impossible to find if you don’t look up directions beforehand.

The great thing about meeting up at these bars is that you feel like a super cool in-the-know expat when you finally find these tiny places. These bars also don’t get too crazy, unlike the packed Sanlitun bar district, full of tourists and people too drunk to stand.

After weeks of feeling like I needed to escape my fancy mall neighborhood, I finally convinced two of my co-workers to head to the hutongs with me for a night of craft beer, awesome burgers and specialty cocktails.

At least… that was the plan. 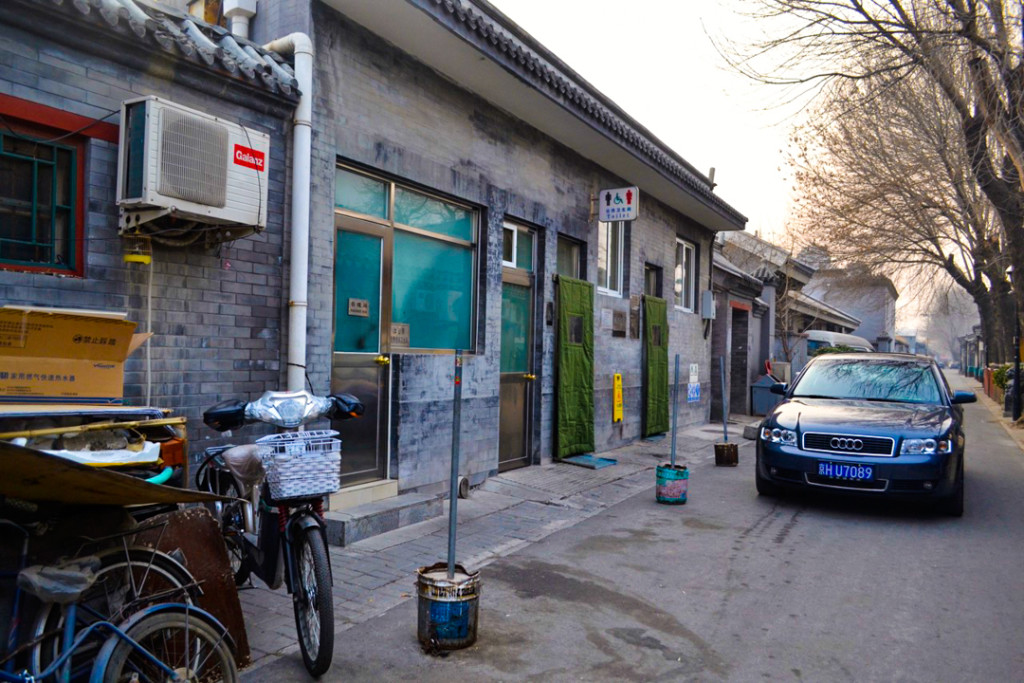 All in all, this was a pretty good plan. But unfortunately, it didn’t quite work out as I’d hoped because no amount of research and planning could prepare me for how confusing it is to find these places.

Rather than look up all the addresses of all these bars, I took snapshot photos of where they were on a map, because obviously, my MA in International Communications taught me nothing about “street skills,” literally. 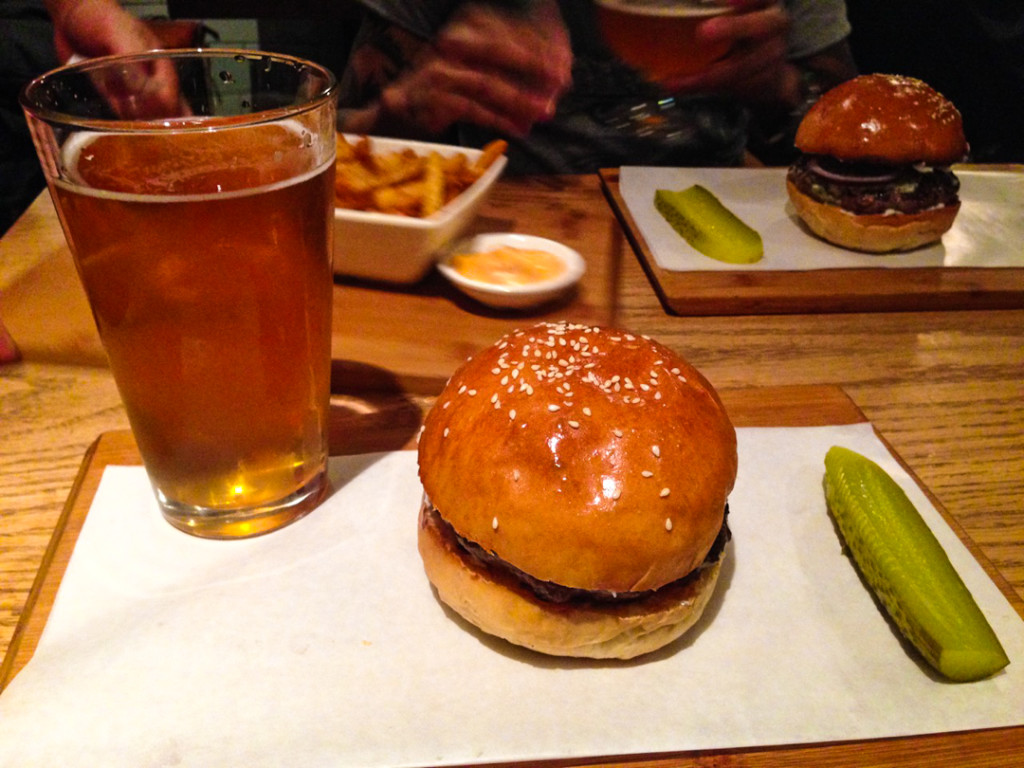 Our first stop was Slow Boat, which I had visited once before. This place is actually impossible to find if you don’t know where you’re going. After a solid 10 minute walk down a residential alley, you’ll find a man sitting outside waiting for lost laowais (foreigners.) With only a tiny sign and no real street lights, I would’ve walked right by it if he hadn’t stopped us!

Slow Boat is super tiny, so it’s very hard to find a seat if you don’t arrive early. With the best burgers in Beijing, it’s hard to understand why they don’t expand a little bit. My guess is that they want to keep their secret hutong hipster vibe.

We decided to come here first for dinner, and I ordered the Anxiety burger, a goat cheese burger served with one of their famous pickles on a wooden block platter. I would also definitely recommend the Fry Burger, which is their award winner topped with beer battered fries. Don’t forget to wash it down with a signature pint of beer with names like Malty Dog Red Ale, Monkey’s First IPA, and Three Sheets Coffee Porter.

Yeah… not so easy to find stuff

Due to some luck with Baidu maps (because Google is blocked in China) we eventually found this tiny bar, tucked into a cozy hutong home. However, it was a bit hard to find and had us wandering around an alley that didn’t exist on my map. Also, while trying to find this place, we literally walked into a residential hutong courtyard (aka SOMEONE’S HOUSE.)

Maomaochong was pretty cool, and definitely popular with the 30-something crowd. As a beer and wine drinker, I usually don’t like to drink liquor unless it’s a good cocktail. That’s why I was super impressed with the selection of Maomaochong!

One of my coworkers is a huge lightweight and decided to take this round off, but I ordered the “Bloody Mao,” which is like a Bloody Mary but a bit lighter and infused with Sichuan peppercorn. My other co-worker ordered a Bacon Old Fashioned, which actually tasted smokey like a good slice of bacon! It was a bit too strong for me, but if you’re looking for a Mad Men-esque cocktail then I’d definitely recommend it.

Overall, we agreed that none of us would go out of our way to try and find this bar again, but if I lived in the neighborhood (which actually might happen in the next few months!) I’d probably become a regular. The food here also looked really great, so I’d be down to try one of their salads or pizzas. 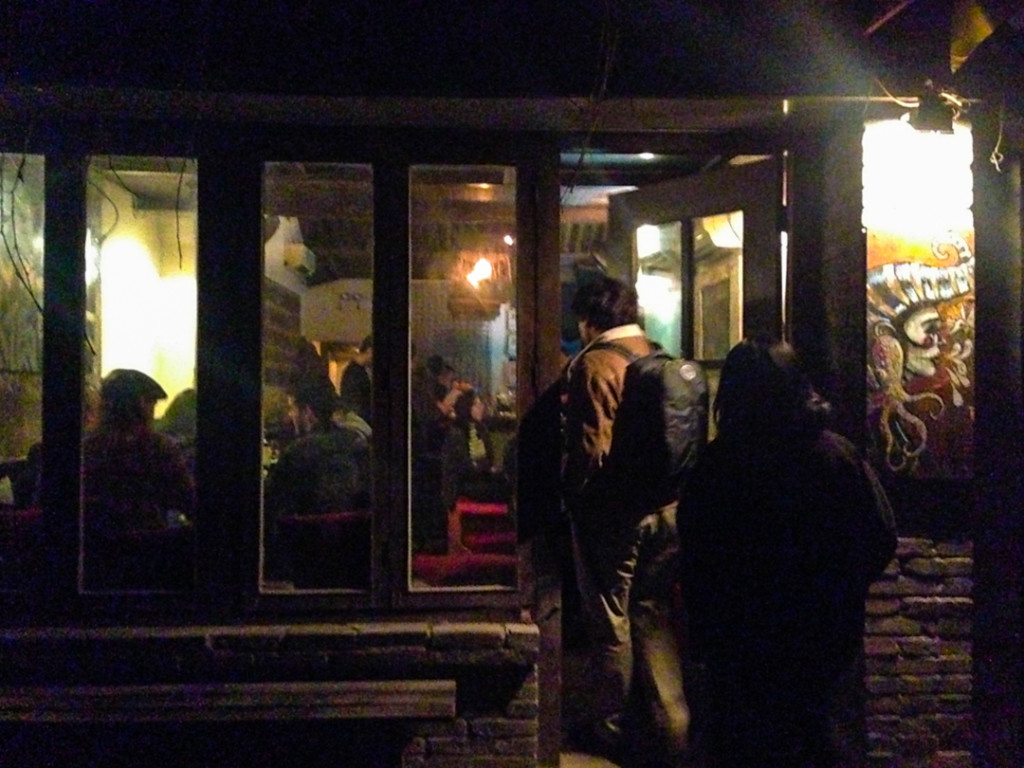 This is where things started to go downhill… We decided to take a taxi to the area since it was F****** freezing, but literally, no one wanted to take us because they didn’t know the street we were talking about. This was actually infuriating because we even had the place pin marked on a map.

I’m not sure if all of Beijing’s old taxi drivers are blind, lazy, xenophobic or a combination of all three, but no one even tried to look at the map. A few cab drivers even slowed down and then sped up again once they could see we were foreigners.

Finally, we snagged a taxi driver who agreed to let us give him oral directions, but the whole thing really put a damper on our good times.

Eventually, we arrived at the popular hutong bar street… you know, where bars are actually visible and easy to find. Unfortunately, Mao Livehouse was not one of these bars.

After wandering around aimlessly for a solid 15 minutes, our gloved fingers were literally about to fall off. Our alcohol blankets were also long-gone at this point, and two of us had to work the next day (this includes me, obviously.)

The random bar we found

At a complete loss, the three of us ducked inside the first random Chinese bar we could find.

The bar was pretty cozy and had a ridiculously large drink menu with the weirdest drink names imaginable. Of course, these cocktails had zero explanation, so one of my coworkers and I decided to take a walk on the wild side and order something random.

Obviously, this was a poor decision.

I ended up with a sickeningly sweet pink concoction, while my partner in crime’s cocktail was bright blue and tasted like licorice. Hey, we live on the edge.

How NOT to Screw Up

If you’re heading to Beijing’s hutong bars, be sure to look up the addresses of where you’re going BEFORE HAND and have a phone with 3G that can route you to these places so you won’t spend all night wandering around in the cold. You may also want to have the addresses in Chinese so that you can show the characters to people if you need directions.

It’s also probably a better idea to limit your self-guided hutong bar crawl to a small area, or start in the afternoon and give yourself plenty of time. NOT having work the next morning is also probably a good plan.

Another option for those visiting Beijing is to take a hutong food tour that involves drinking like Lost Plate. You’ll finish the tour at Arrow Factory Brewery which is walking distance from Fangjia Hutong. 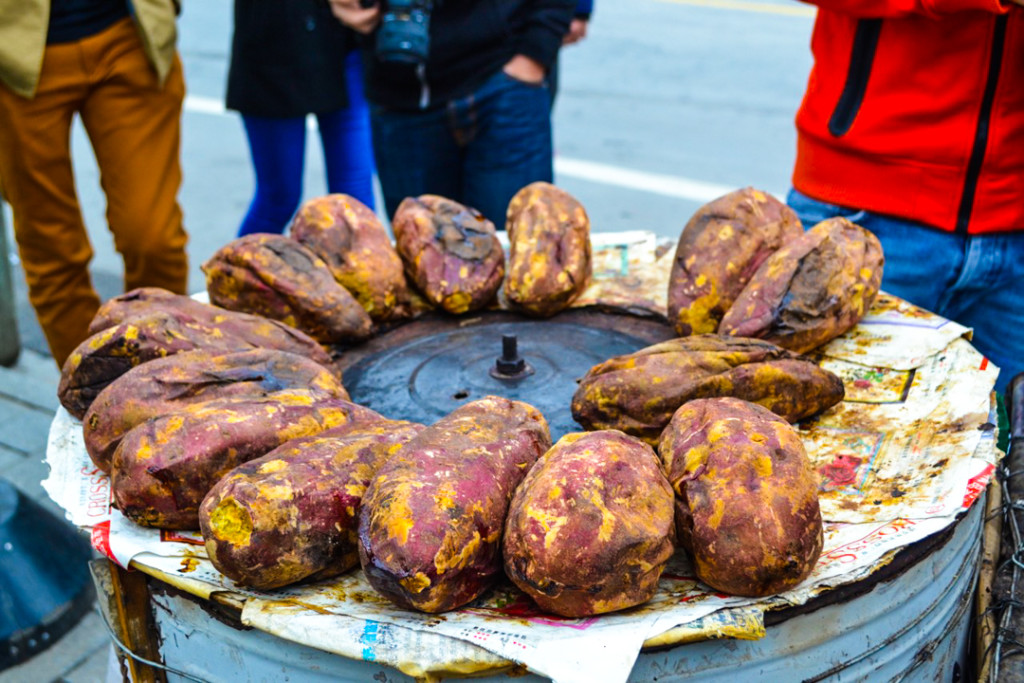 Street sweet potatoes are my favorite!

Now that I’ve been living in the hutongs for over a year, I have a great suggestion for an easy night out in Beijing’s coolest alleyway streets!

Fangjia hutong is the best hutong for bar-hopping in Beijing. There are wine bars, beer bars, cocktail bars and more. You can also check out Hot Cat Club which has live music and standup comedy on Wednesdays (it’s free!).

Take a short-cut through the courtyard behind Hot Cat Club and you’ll stumble on a cat cafe! This is Jiaodaokou North 3rd Alley (Jiaodaokou Bei San Lu), and next to the cafe you’ll find Tiki Bar, my favorite hutong bar! They have great drink specials. and a VOLCANO drink to be shared amongst friends. Yes, they do set it on fire.

For Game of Thrones lovers, next door you’ll find Knights and Merchants where you can drink mead, fight with swords and pet a dog dressed in armor. Need some drunk food? Moxi Moxi on Fangjia serves delicious Israeli food all night! 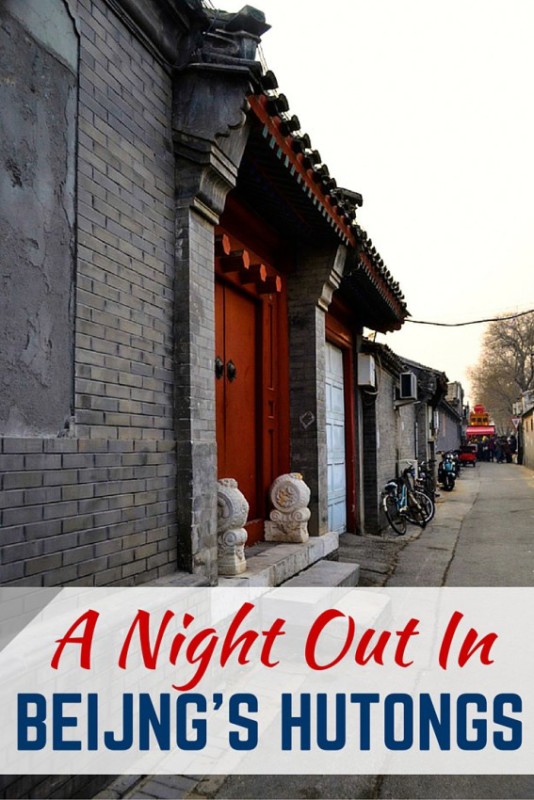 PIN me for later!