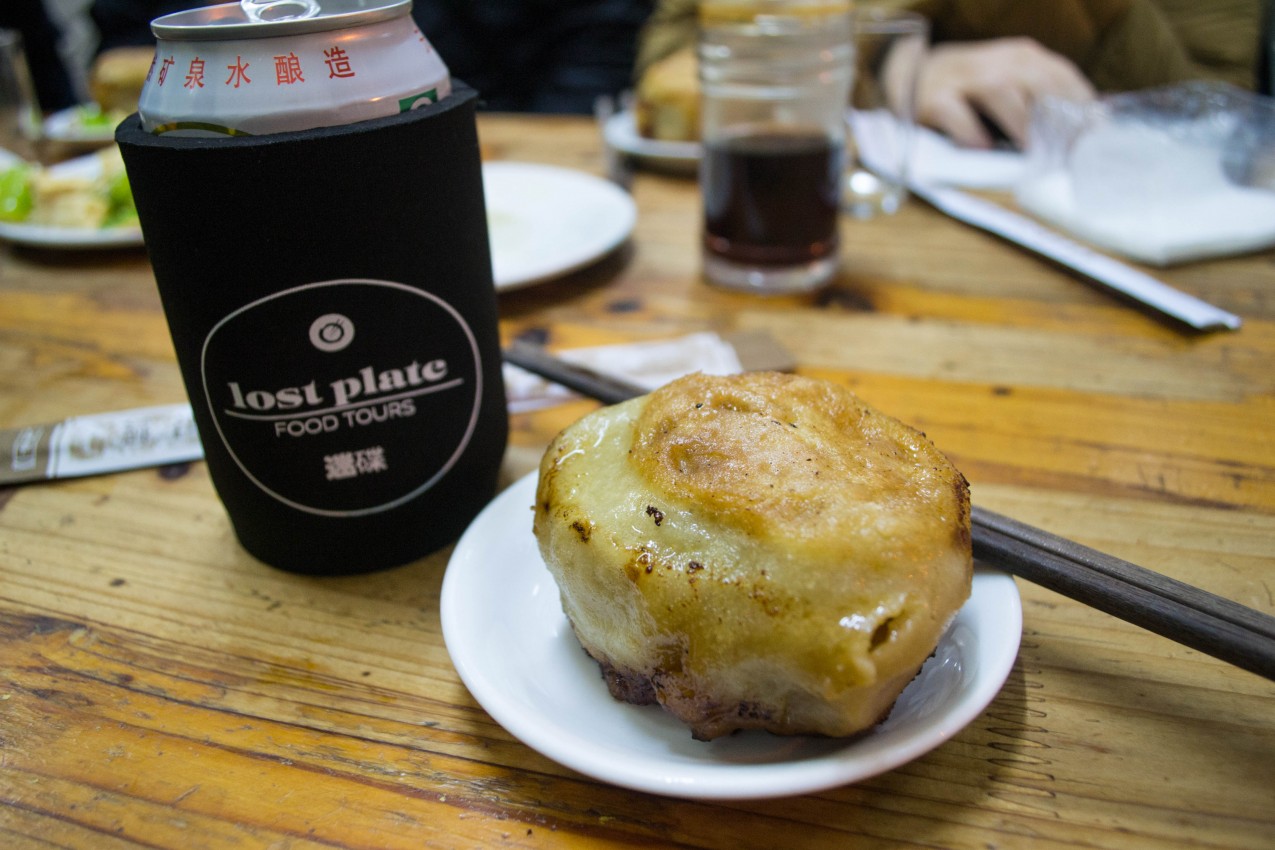 Do you love local food, hidden alleys, and craft beer?

Well, those are three of my absolute favorite things.

Living in Beijing’s hutongs for over 1.5 years, I love spending my weekends wandering the winding alleyway streets, trying new local restaurants or relaxing at a brewery or hidden cocktail bar.

But I’ll admit that I’ve begun to frequent the same places, sticking to the hutong alleys within walking distance of my apartment. But, in the spirit of exploration, I decided to brave the cold and head out for a night of food, beer, and… tuktuks. 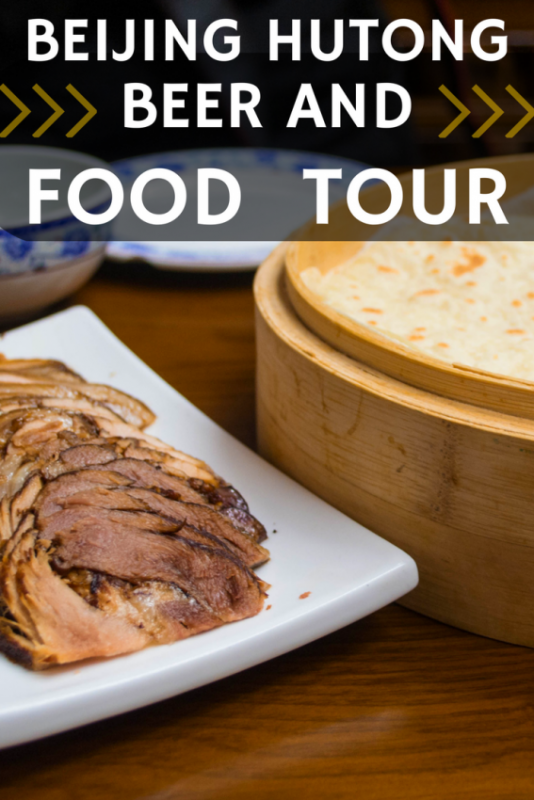 The first time I heard of Lost Plate food tours was actually on Snapchat! My blogger friend Evo Terra was visiting Chengdu, and of course, I watched all of his snaps religiously.

One night Evo and his wife Sheila climbed into a tuktuk and set out on a tipsy food tour of Chengdu. They tried all of Sichuan’s delicacies while sipping Chinese beer on the hutong in between rounds.

Eventually, the two ended up at a brewery, where their Snaps became progressively more and more entertaining as the night wore on and they joked with their Chinese food guides.

I was beyond jealous. I wished they had one of those tours in Beijing.

Well…. Apparently, they do! 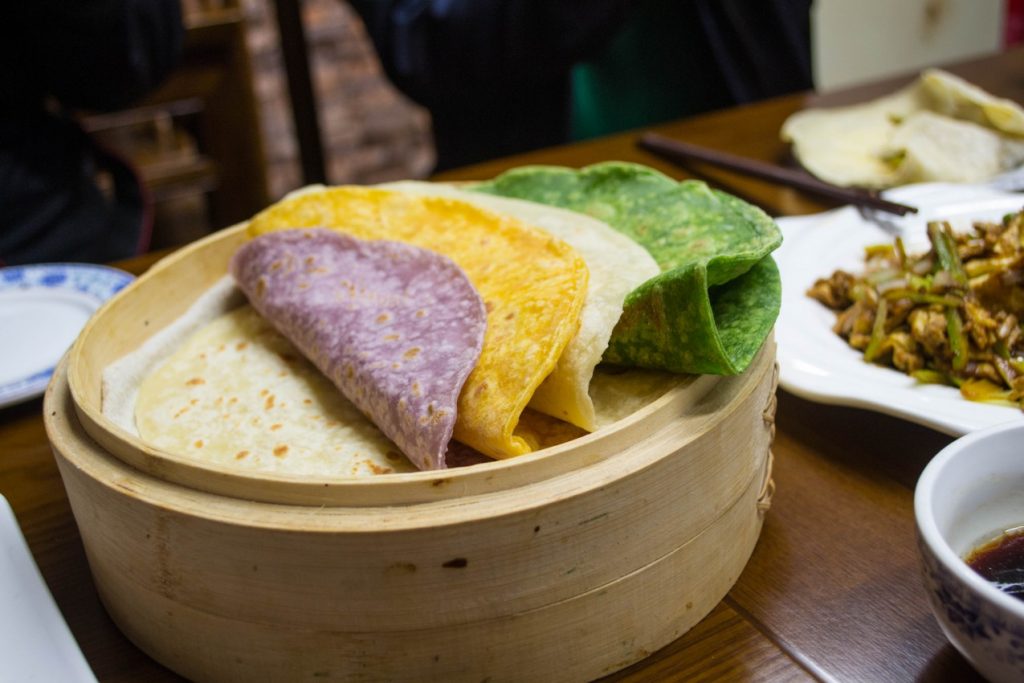 The pork pancakes were amazing

I had agreed to meet Beijing’s Lost Plate guides near the Lama Temple, about 15 minutes walking from my apartment. It was a cold and rainy night at the start of winter, and I threw on my coat and uggs to keep me warm on the trip.

When I arrived I was greeted with an ice-cold Chinese beer in a themed beer koozie while we waited for the other three travelers to arrive. My guides were co-founder Ruixi and Doris, a Beijing local.

Thankfully the tuktuks were already waiting, so I was able to relax inside as the rain fell around me.

Eventually, the others arrived and we sped off down the main road, avoiding the horrible rush hour traffic in our special bicycle lane.

All-in-all, we visited five different places, and I still can’t tell you which was my favorite. I really, really need to get directions to some of these restaurants so I can go back. Thankfully the last two are even within walking distance to my apartment. 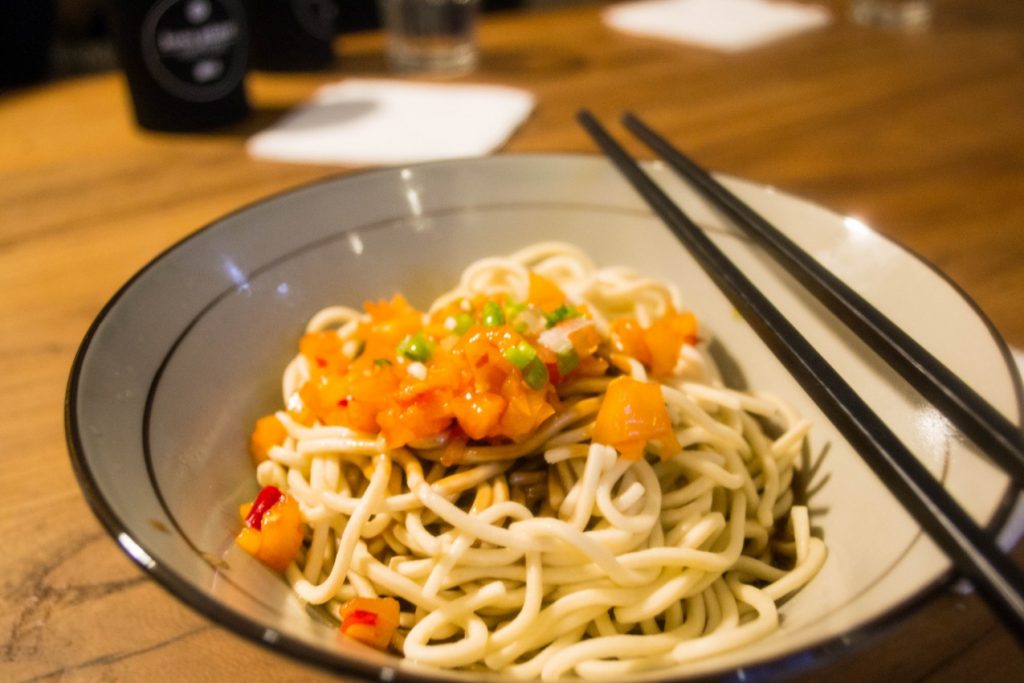 Our first stop was to a local’s hutong home. Seriously! We entered their living room and I felt like I should take off my shoes, as we sat on the couch and floor surrounding a small table.

Next to the living room was a small kitchen where a husband and wife team made the most delicious sesame noodles I’ve ever had in my entire life. I still crave these to the point that once I finish writing this, I’m going to email Lost Plate for the address.

We told the guides what level of spiciness we could handle (low spice for the others, extreme spice for me), and they set to work making our noodles. 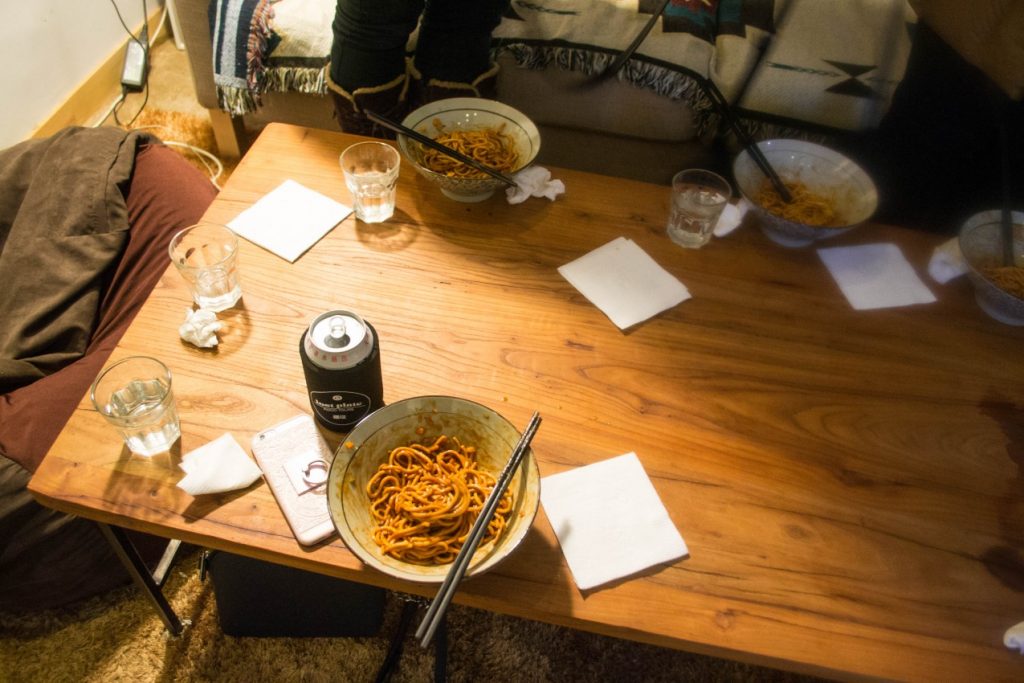 When we received our bowls of noodles, we were told to spend a solid 5 minutes mixing so that they were completely covered in the sauce and spices. An unappetizing brown color, you’d think this big bowl of noodles doesn’t taste like much, but the spicy sesame sauce flavor literally explodes in your mouth.

We were told not to eat the whole (arguably large) bowl to save ourselves for out other stops, but I couldn’t help but sneak a few more bites before we headed out the door. It felt like such a waste to leave half a bowl behind, but apparently, the owners refuse to serve larger portions or let us split our servings in half! 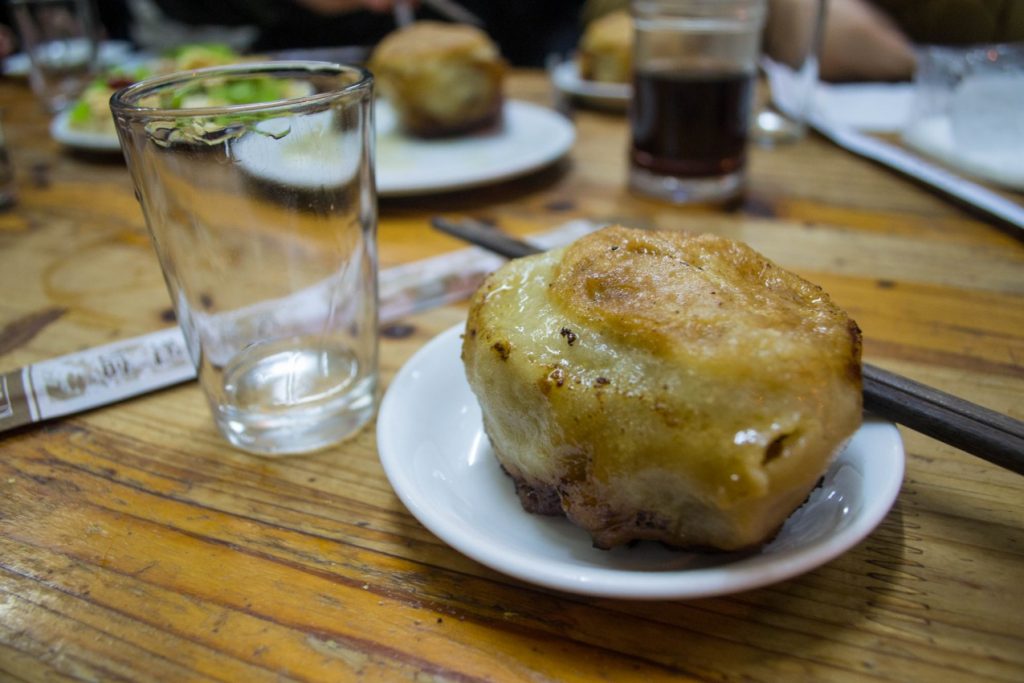 Our next stop was a small restaurant packed with locals. The table to our right contained a group of old Chinese men, laughing and slugging back gulps of strong baijiu.

Our guides pointed out a counter of baijiu, and explained that regulars could buy a large bottle and keep it at the restaurant! They then motioned for Lost Plate’s baijiu bottle and poured us each a small glass while we waited for our food.

Eventually, they served us a large fried dumpling filled with tasty meat mixed with onions and spices. I had to stop myself from shoving the whole thing in my mouth immediately. 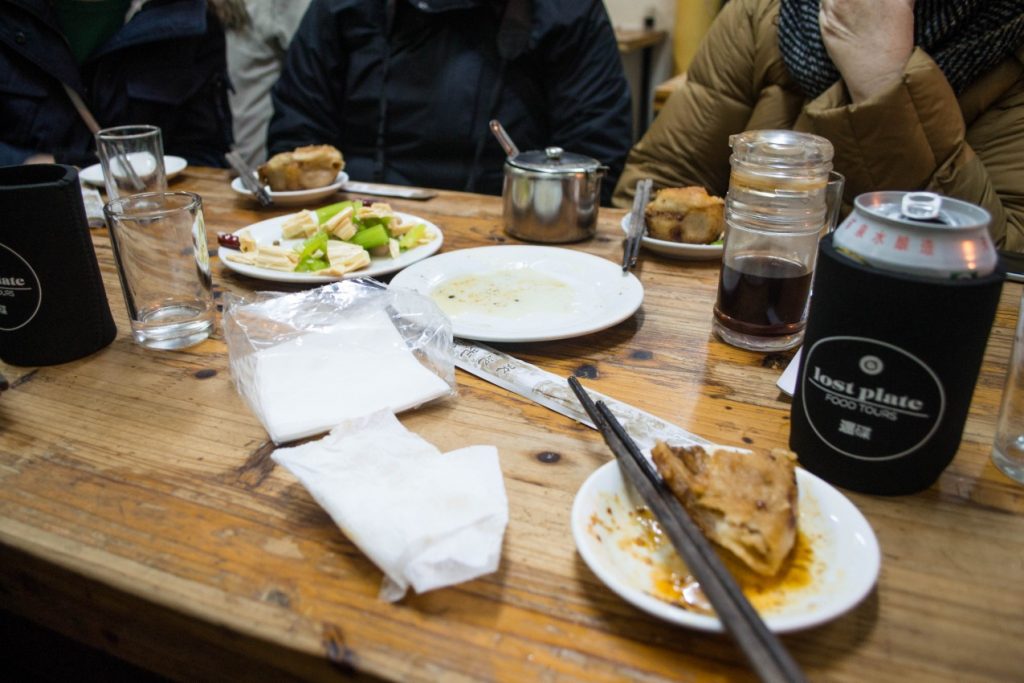 It tastes great with a little spice and sauce!

As we were eating, Doris told us the story of the dumpling and empress dowager Cixi (think the Chinese version of Cersei from Game of Thrones). Cixi would feast with hundreds of different Chinese dishes, and one day she demanded the chefs create something new.

Panicked, a chef whipped up a giant dumpling and hoped for the best. Not the most beautiful dish in the world, the chef assumed Cixi would pass it by. But to his shock, she went right for it.

Biting into the giant dumpling, Cixi asked for its name. The chef picked the first thing that came to mind: the golden nobs on the doors of all the imperial buildings.

Thankfully for him, Cixi loved the dish and you can still eat these large tasty dumplings in the hutongs today. 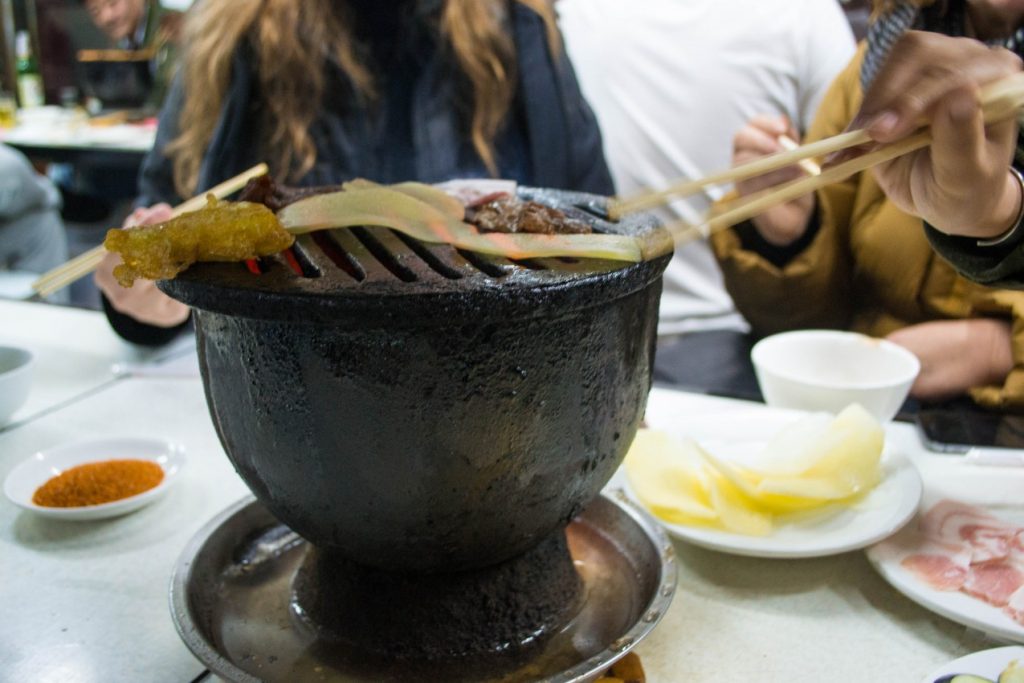 Our next stop was a Mongolian hot grill. We sat surrounding a steaming grill plate as we took turns grilling meat, zucchini, potatoes, mushrooms and fried mianbao bread cooked in egg (which is SO GOOD).

Once fried, we dipped our ingredients into a concoction of various sauces. Thankfully it was easy to get a few tastes of everything here without going too overboard. We still had three more places to go! 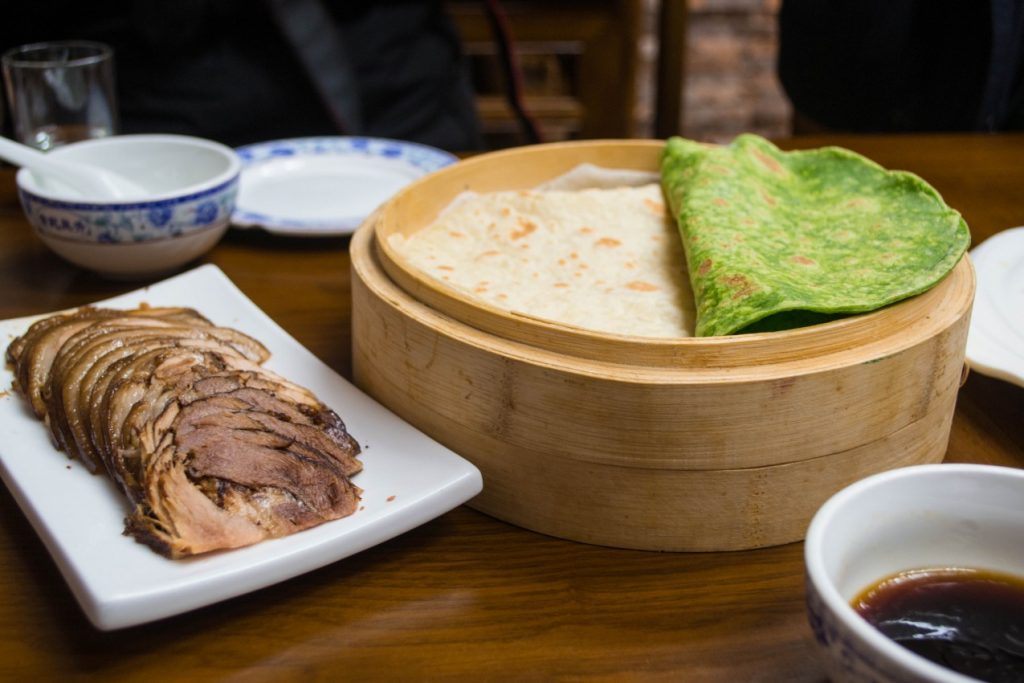 The best pork pancake ever

Everyone knows Beijing is famous for Peking Duck, served with veggies, plum sauce, and a thin taco. Well, duck isn’t the only incredible taco native to Beijing!

For our last dinner stop, the group went to an emperor’s pancake place that makes their own homemade tacos in different flavors. We filled our tacos with pig elbow, eggs and veggies, and a wonderful sauce.

Ruxi and Doris explained that in ancient China, emperors would give their favorite employees and officials a pancake filled with pork and egg for the Chinese New Year. If you got a pancake, that meant you were doing a great job. If you didn’t get a pancake, well…

I still can’t decide which of the four dinner options were my favorite, but most people tend to say the pork pancakes are the best. Either way, I have to find this place and go back! 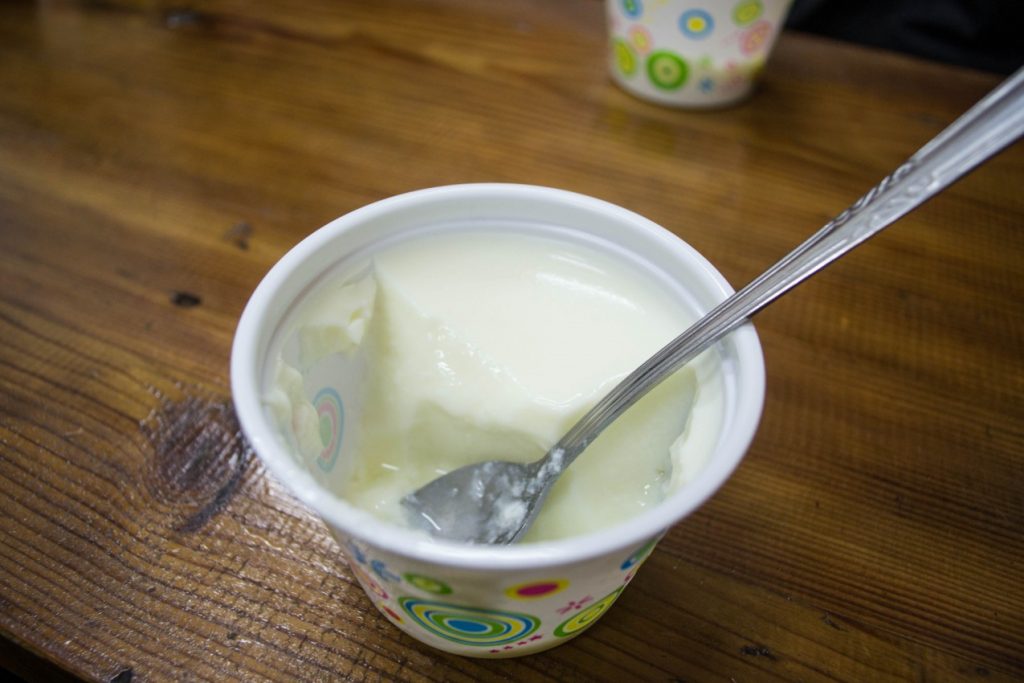 I’ve had a few yogurt custards in Beijing, and they’ll all amazing. For our last stop, we went to one of these pudding places where the owner is famed for her incredible recipe.

While most yogurt sellers cook the pudding with a bit of rice wine, this woman uses a higher concentration so it’s a little bit alcoholic! Her friends all raved about her incredible pudding, so the woman opened up a small shop in the bottom floor of her house.

The concoction tastes a bit like tapioca pudding with a yogurt consistency. It was SO good and I’ll definitely be back since I only live a few blocks away! 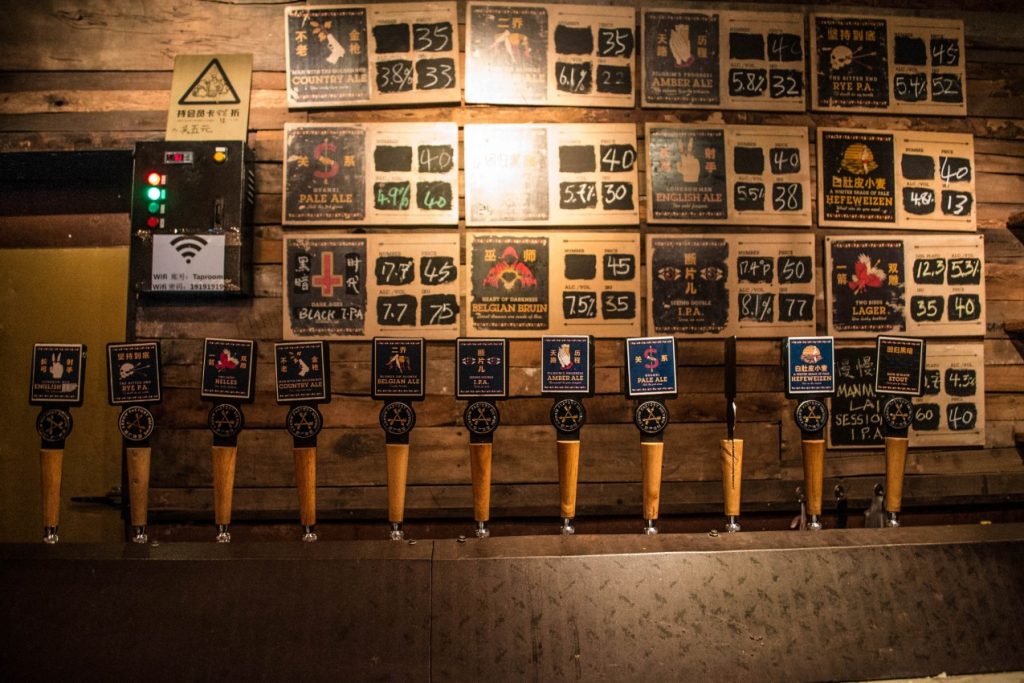 Which would you pick?

Our final stop of the tour was Arrow Factory Brewery, a local Beijing craft brewery on “Arrow Factory” hutong.

They let us try a few samples before I settled on a good IPA. We all sat around and took a few photos before everyone departed, but we were free to stay for the whole evening.

I was by myself and had work the next morning, so I headed out after finishing my beer, but if I was with a few friends I may have stayed all night!

Curious to see what the tour was really like? I took a video on Snapchat!

Who is Lost Plate For?

I’ve taken many food tours in my day, and Lost Plate was by far the most fun. If you’re looking for a great night out with friends or even solo, this is the tour for you!

The food on the tour was incredible, and we only visited places frequented by locals, with the exception of Arrow Factory, which is usually filled with expats. I was thoroughly impressed with everything we ate, and I think Lost Plate did a great job picking out all of the different restaurants. 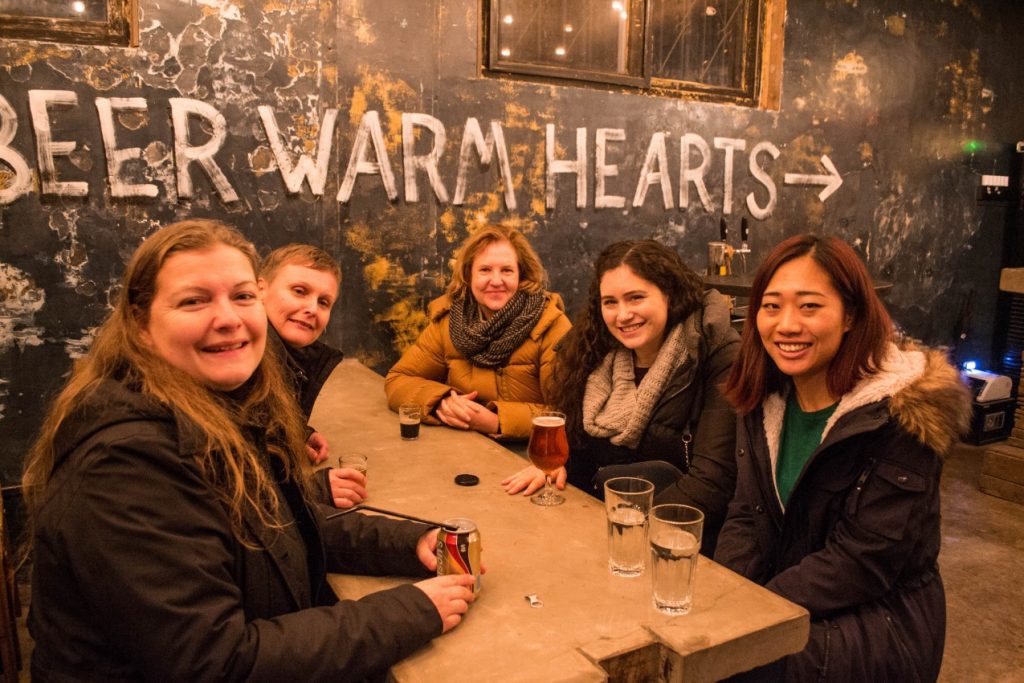 Who would I be to turn down a beer?

I think the main selling point of this food tour is the atmosphere. Obviously, you should probably like to drink beer if you’re going to come on this tour. While it is family friendly, I think the fun drinking vibe of the tour is a huge selling point, and to be honest, I was a bit bummed that the older women on my tour didn’t really want to drink with me.

Ruxi later told me that whole groups of young English teachers from different cities will book Lost Plate together before a night out in the hutongs. But you don’t have to be a twenty-something to have fun. Evo and Sheila had a great time!

Lost plate is the perfect combination of delicious local food and a lively friendly atmosphere. If you’re looking for a really fun night out while experiencing the local culture, this is the Beijing food tour for you!

Thanks so much to Lost Plate for inviting me to test out their Beijing Food Tour!