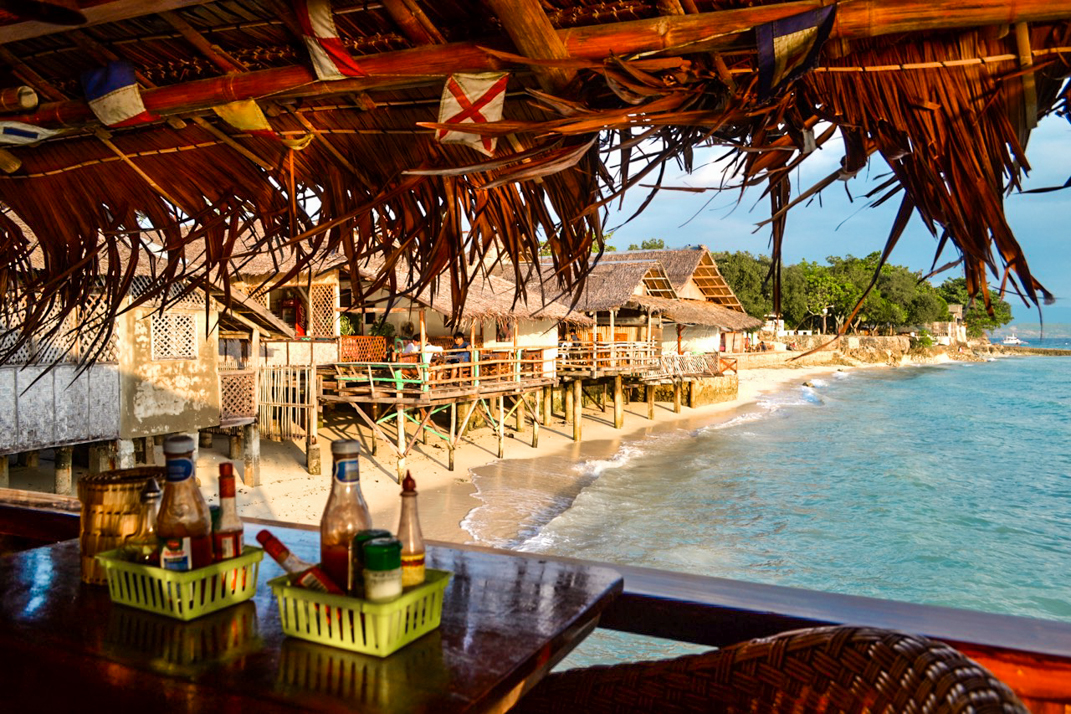 Tilting my head backwards to stare up at the surface, I floated mesmerized, staring at the black cloud of fish that morphed into varying shapes. Moalboal’s famous “sardine run” is only one of the many underwater wonders you’ll see diving off the coast of this friendly Philippine beach town. Sea snakes, candy crabs, sea turtles, electric clams (?!) and countless frog fish are just a few of the rare creatures I saw during my three dives in Moalboal, Cebu. 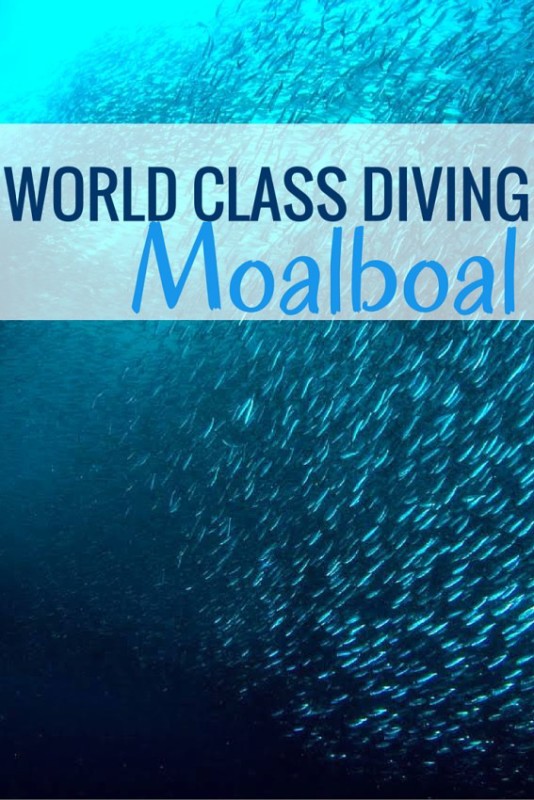 If you’re a beginning diver, Moalboal and the surrounding area will spoil you rotten. The Philippines is world-reknowed for its incredible (and incredibly cheap) diving. While I wasn’t planning on making my three weeks in the Philippines a dive trip, I couldn’t help but jump in the water every chance I had!

While I was on the tiny island Malapascua diving with sharks, I met a fellow diver who said Moalboal was home to the best diving he’d ever seen. He described swimming through clouds of black sardines, and snapping videos of rare frog fish, a fish so laughably ugly it has become one of my favorites. Too bad Moalboal wasn’t on the itinerary… I’d never even heard of the place! 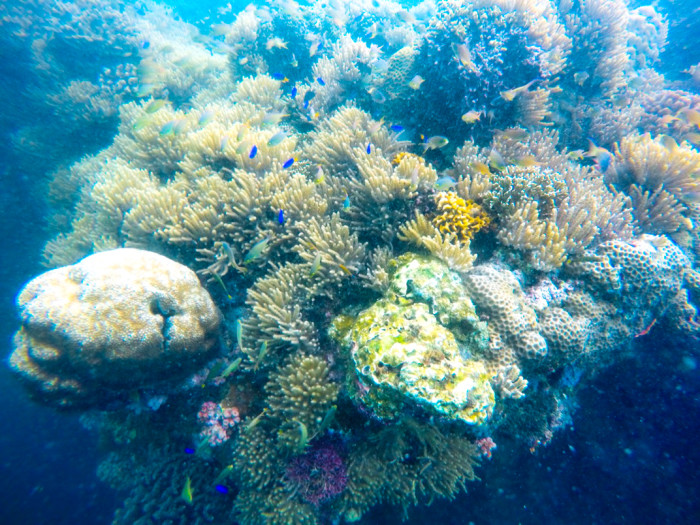 Moalboal under the sea!

After getting hit with a typhoon, taking the ferry to Bohol wasn’t an option. Since I was stuck on Cebu, I decided to explore. After a bit more research I discovered Moalboal and the famous sardines were only a few hour bus ride away! Within a day I was on a bus to Moalboal to put my new advanced diving certificate to use.

I did a bit of research on Moalboal diving companies before I arrived, and based on amazing trip advisor reviews and the website itself, I settled on Neptune Divers. When I arrived in Moalboal, I met a few girls at my hostel who were in town for diving as well. Coincidentally they were all diving at Neptune too! After a solid recommendation from all of them, I knew Neptune would be the shop for me, and headed down the road to book a few dives for the next day. 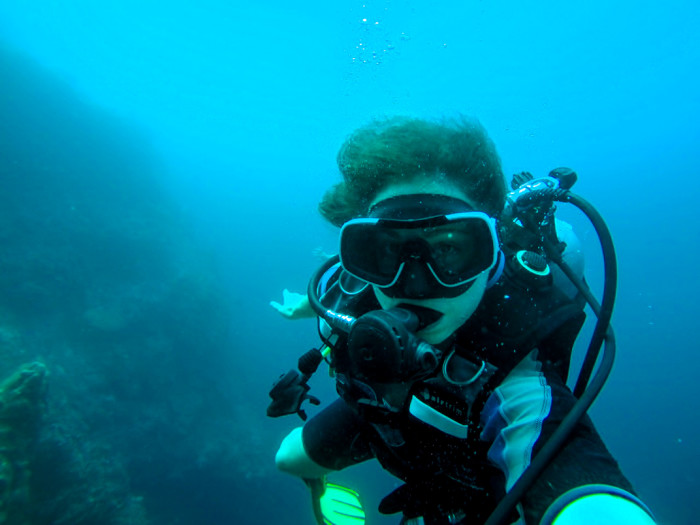 After a hearty breakfast, my hostel friends and I donned our wetsuits and hopped on the boat. We were scheduled to visit Pescador island, the most famous collection of dive sites in Moalboal.

When I jumped in the water, I couldn’t help but immediately notice the incredibly poor visibility. Apparently the typhoon had stirred up all the sediment around Moalboal, turning a world-class dive site into an underwater snowstorm. Just my luck! I guess that’s what I get for visiting the Philippines during typhoon/monsoon season. The visibility was so bad that it honestly felt like I was doing a night dive.

Even though the visibility was uncharacteristically poor, I still managed to spot some of the most interesting things I’ve ever seen underwater. I was extremely impressed by my Filipino dive master Johnny, who was almost savant-like in his ability to spot Moalboal’s most marvelous sea creatures in such horrible conditions. We’d be swimming along and he would randomly stop, only to point at a tiny candy crab the size of a golf ball! 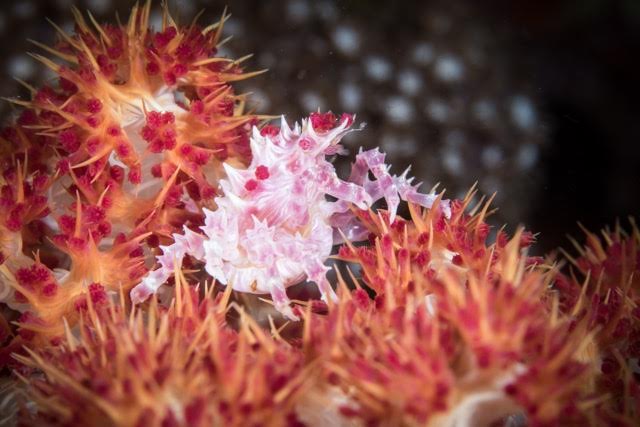 Since the conditions on Pescador were some of the worst Neptune had ever seen (they actually told me this), we moved our second dive site to Tongo Point, which was much better. On this dive, Johnny actually led the group of us into a small cave where we could spot electric clams. What’s an electric clam you ask? I was shocked to discover that you can actually see the electric charge running through the mouth of the clam. It was like a mini light show in the clam’s mouth. I had never even heard of electric clams before I saw them in Moalboal, and they’re now officially the coolest thing I’ve ever seen underwater.

Here’s a quick video of an electric clam I found on YouTube!

Moalboal is also home to a ridiculous number of frog fish, the funniest and ugliest fish I’ve ever seen. Frog fish have skin (scales?) that contain lumps and algae growths to help them blend into the coral. Frog fish are also the deepest sleepers I’ve ever seen! When we’d stumble on a frog fish, Johnny would lightly poke it with his metal stick. The fish would slowly open its eyes to see what was going on. Obviously, us divers were not enough to scare these fish awake. The lazy frog fish would bumble around for a bit before falling over, fast asleep. 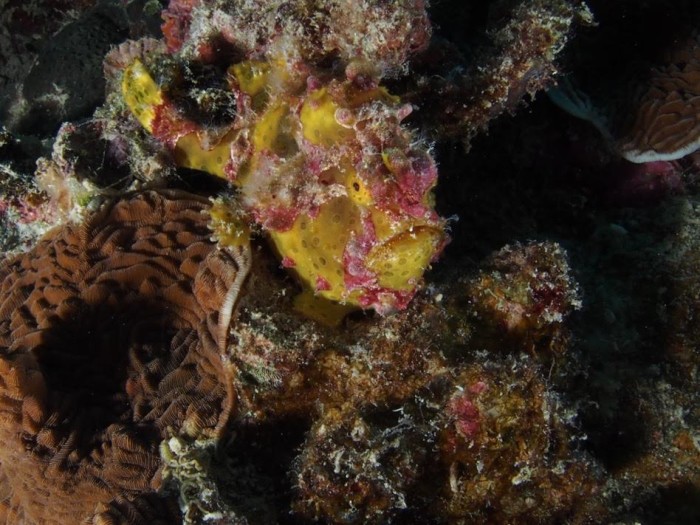 Can you spot the frog fish? (photo by Neptune)

In addition to frog fish and electric clams, I also spotted a free-swimming sea snake and a giant sea turtle!

I knew I couldn’t leave Moalboal without diving with the sardines, so I headed back out at 3pm to do Moalboal’s famous sardine run. The sardines are actually just offshore and swim near the surface, so you can actually snorkel with them if you don’t dive. My plan was to do both (what can I say, I’m obsessed), but a giant monsoon stopped me from experiencing the sardines with a snorkel. I guess I’ll just have to come back! 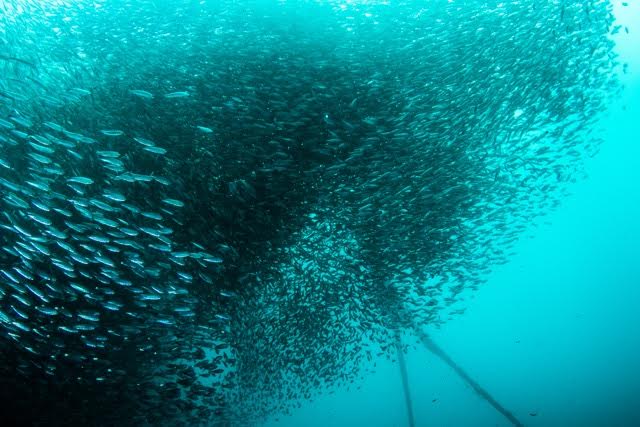 The sardine run was the first shore dive I’ve ever done. Walking out with all my equipment strapped on my back while battling the waves was a major struggle. Thankfully, Neptune’s dive master in training Jordan coached me through it, even though he was out doing a fun dive himself! Once I got my head underwater, I was much more comfortable, and almost immediately spotted another sea turtle. Score!

The conditions of the sardine run dive were still pretty bad, but it didn’t stop me from enjoying the offshore reef and the clouds of sardines circling overhead.

For an inside look at diving in Moalboal, I put together a few GoPro video snippets for you to see some of my underwater finds!

Do I Recommend a Trip to Moalboal?

Yes. Absolutely yes! While I happened to visit Moalboal on probably the worst diving week of the year, I still saw the coolest underwater creatures I’ve ever seen. Judging from videos and photos I’ve seen online, as well as the recommendations of other divers, Moalboal diving is world-class, and I will DEFINITELY be going back.

While Moalboal is famous for the sardines, there are plenty of other amazing things to see. Pescador island is internationally famous, so be sure to plan a few dives at this stunning spot. Moalboal is a great place for traveling solo in Cebu, and I made tons of friends at Backpackers Place, the only hostel in the area.

Moalboal is also a quick bus ride from Oslob, which makes getting to Oslob very easy. You can also head to Dumaguete and Cebu City in just a few hours on a public bus.

Even if you’re backpacking Southeast Asia on a budget, I always recommend getting scuba certified. Dives are so incredibly cheap, you really don’t want to miss this! 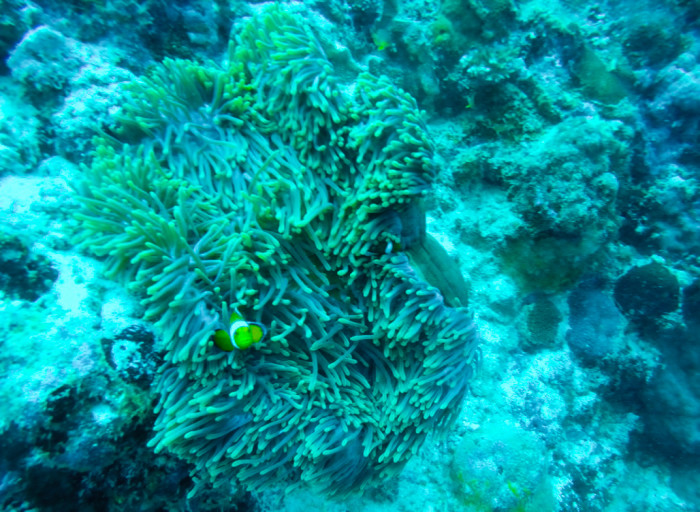 Neptune was extremely professional, and I 100% recommend them for your trip to Moalboal. My dive master Johnny was incredibly knowledgable about all the dive sites, and made sure to give me extra attention, knowing I was the least experienced of all the divers in the group. Neptune also gave us all free coffee and fruit, as well as fresh towels after our dive. Fancy! 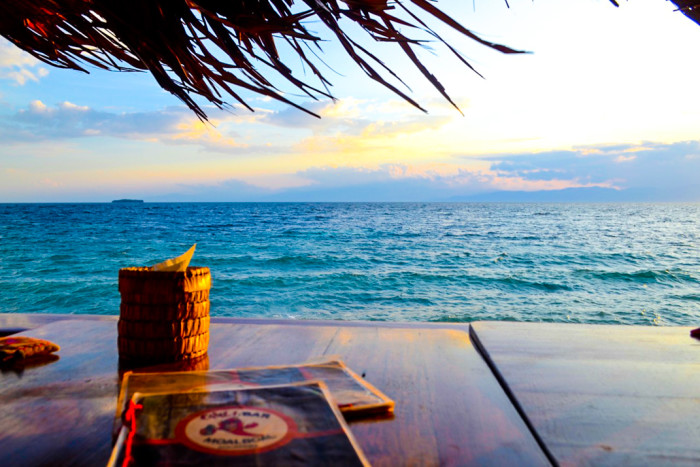 Dinner with a view at Panagsama beach

Moalboal is located on the southern tip of Cebu. To get there, you’ll need to fly into Cebu city airport and take a 3-hour Ceres bus (75 pesos), or you can take a ferry from Dumaguete to Sapa (80 pesos) and then a bus to Moalboal (60 pesos), the whole trip will take you about 2-3 hours.

All of the diving is located on Panagsama beach, which is a short trike or motorbike ride away from the bus terminal.

I personally stayed in Moalboal Backpacker Lodge, the main hostel in Panagsama, with rooms for as low as 200 pesos a night. Keep in mind, this is the only hostel in Moalboal, so be sure to book in advance. I almost didn’t get a bed in low season right after a hurricane!

If you’re looking for a private room at an affordable resort, I suggest you use Booking.com, which usually has the best deals in the area. 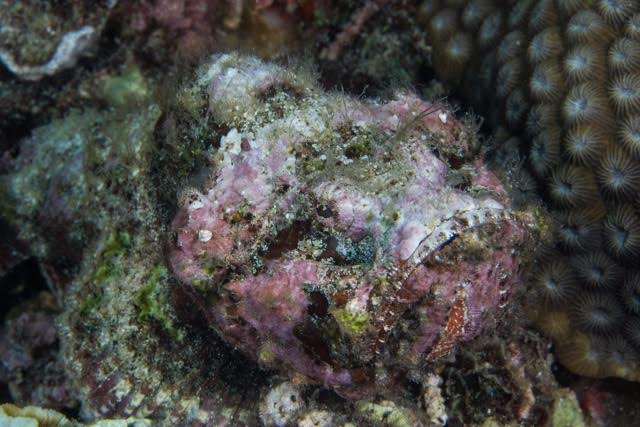 What to do aside from diving

Are you traveling with someone who doesn’t dive? Don’t worry, there’s plenty of other things to do in the area.

Personally, I was planning on snorkeling and relaxing on white beach, but unfortunately a monsoon made me move on a little earlier than planned. However, I was able to try canyoning in Kawasan and I highly recommend it! 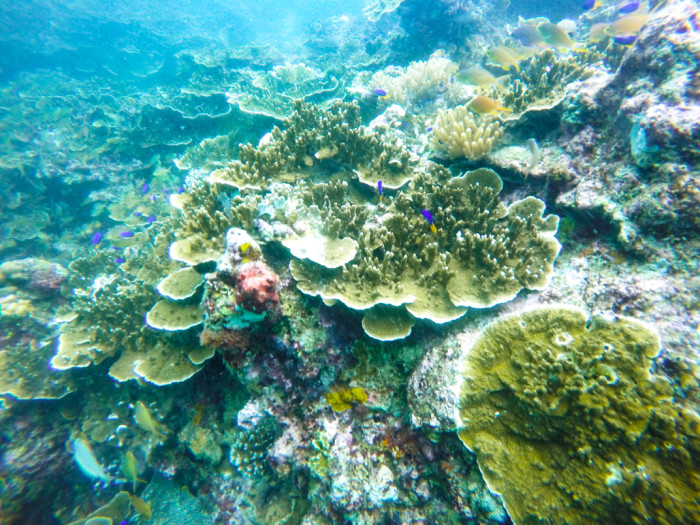 Thanks so much to Neptune for hosting me on a few of their fun dives. I had an amazing time with zero complaints! Also, this post contains a few affiliate links. Book your stay in Moalboal through the links above and give me a few bucks to keep on having adventures.

What’s the coolest thing you’ve ever seen under the sea?