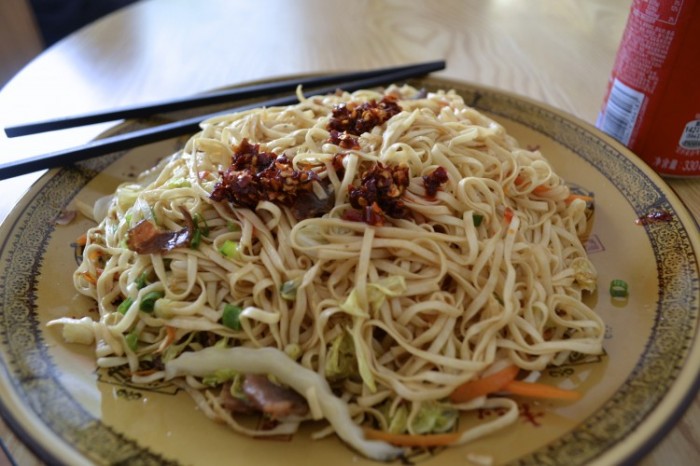 Chao mian, otherwise known as stir-fried noodles, can be found almost everywhere in China. From street stalls to hole-in-the-wall eateries, chao mian is always a great option when you’re short on time… or cash. While these noodles are typical of southern China, you can find them throughout the county. Each city and province makes these noodles differently. Sometimes they use large, flat “he fen” rice noodles, other times the noodles are thin egg noodles (as seen below). These noodles typically have small pieces of pork, egg and vegetables, but can sometimes contain beef or shrimp. 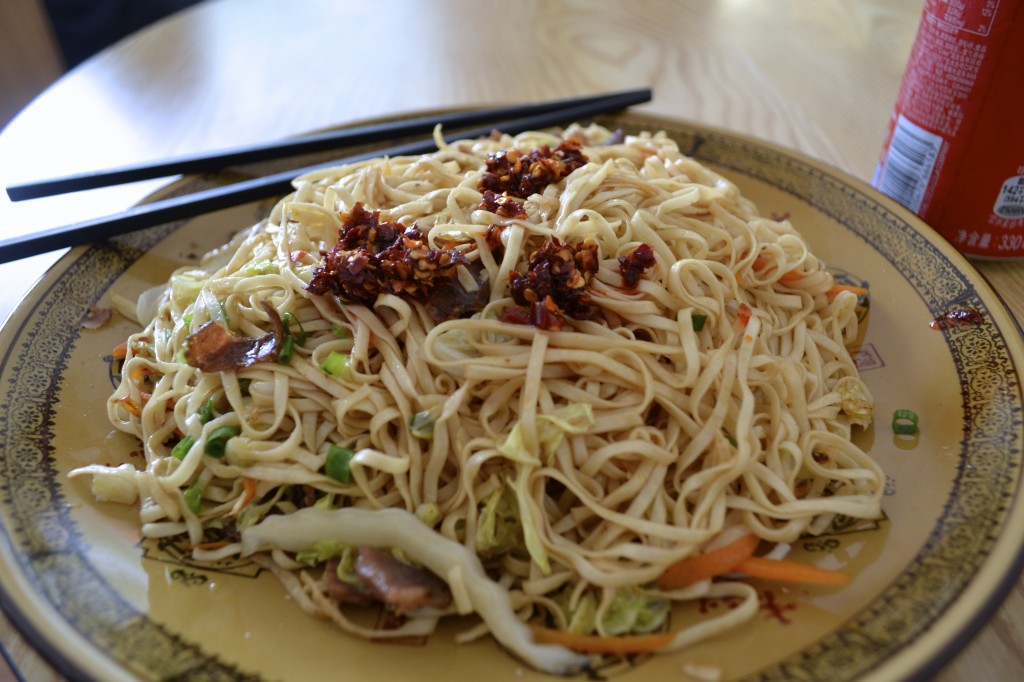 The noodles above are from a tiny hole-in-the-wall restaurant in Guangzhou. I had just arrived to my hostel and I was starving. As I ran out to get some food, a thunderstorm started up and the monsoon rain had me drenched in about .2 seconds. I ran to the first restaurant I could find and ordered myself a heaping plate of chao mian. The noodles definitely hit the spot. The noodles were some of the best chao mian I’ve ever had. Light on the oil and full of vegetables, they perfectly complimented the heat and humidity of Guangzhou.

If you’re traveling in China and there’s nowhere to eat besides little hole-in-the-wall places with no english or picture menus, it’s a good bet most of these places will have stir-fried noodles. All you have to say is “chao mian” and let the chef take care of the rest. The word “chao” means stir-fried and “mian” means noodles. If you want to switch it up go for some “chao fan” (stir-fried rice) or “tang mian” (noodle soup). If you like spicy and you’re getting your noodles from a street vendor, be sure to order them “la” (with a falling tone), and they’ll load up the spices for you. If you’re at a small restaurant, most tables will have a small bowl of spices that you can add to your taste. Keep in mind, if you’re into the large “he fen” noodles, you may have to ask for “chao he fen” rather than just “chao mian”. The he fen noodles are very popular in Ningbo, but you may not find them at a lot of places in China. But there’s no harm in asking right?!

To sum it up, after having a bite of these noodles, you’ll never eat at Panda Express again. Oh.. did I mention a plate of these will cost you about $1-2? Let me know when you book your flight.