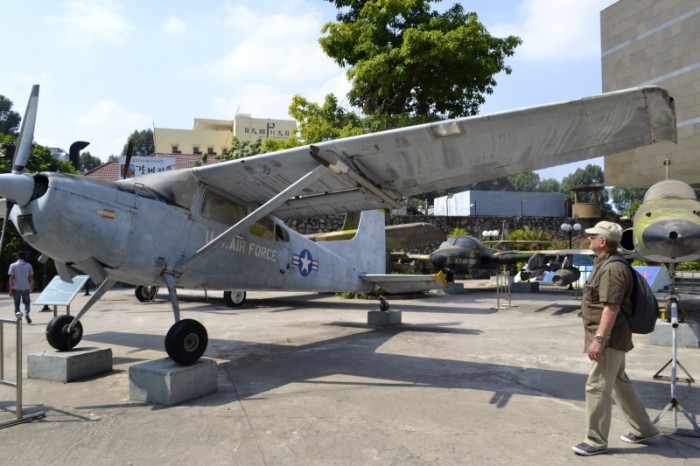 My father could have fought in the Vietnam War; my dad has friends who fought and died in Vietnam. So how is it, visiting Vietnam as an American? Would there be tension? Should I lie and say I’m Canadian? 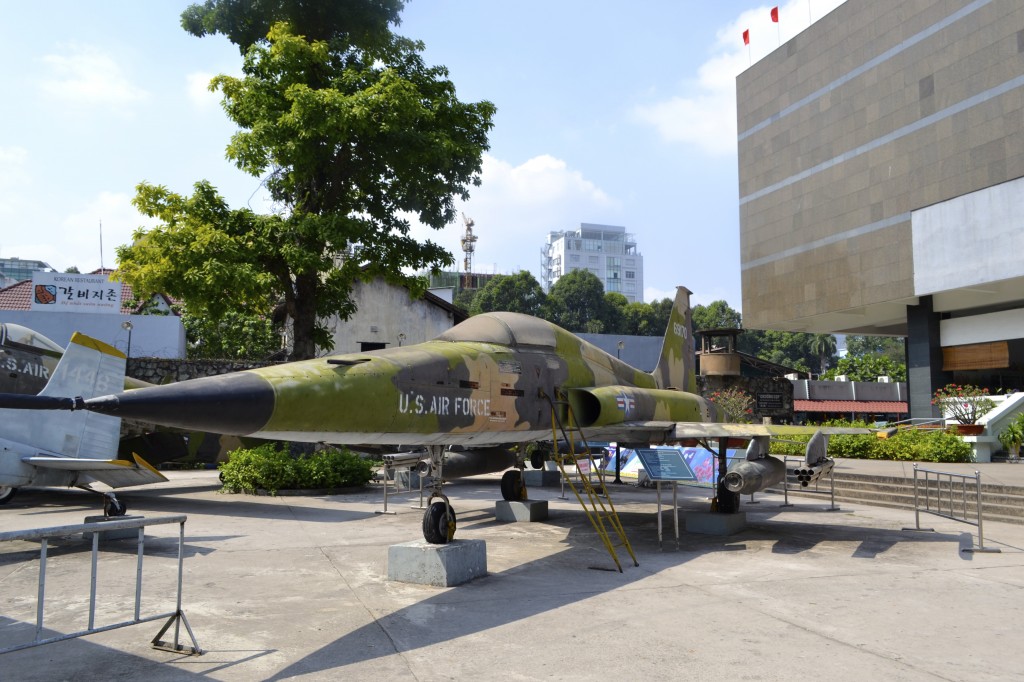 In American high school, they only ever teach you the basics, and the curriculum focus much more on statistics and facts, as well as the antiwar movement. Never did we actually discuss why it was so important that America stayed in Vietnam, or whether or not the decision to go to war was a good one. But in college, as an International Affairs major, we took the Vietnam War to a deeper level. While we discussed the logistic concerns of the Vietnam War and international relations as a whole, we still never actually studied the atrocities committed by Americans in Vietnam. The argument was more philosophical, from an international affairs and foreign policy perspective. 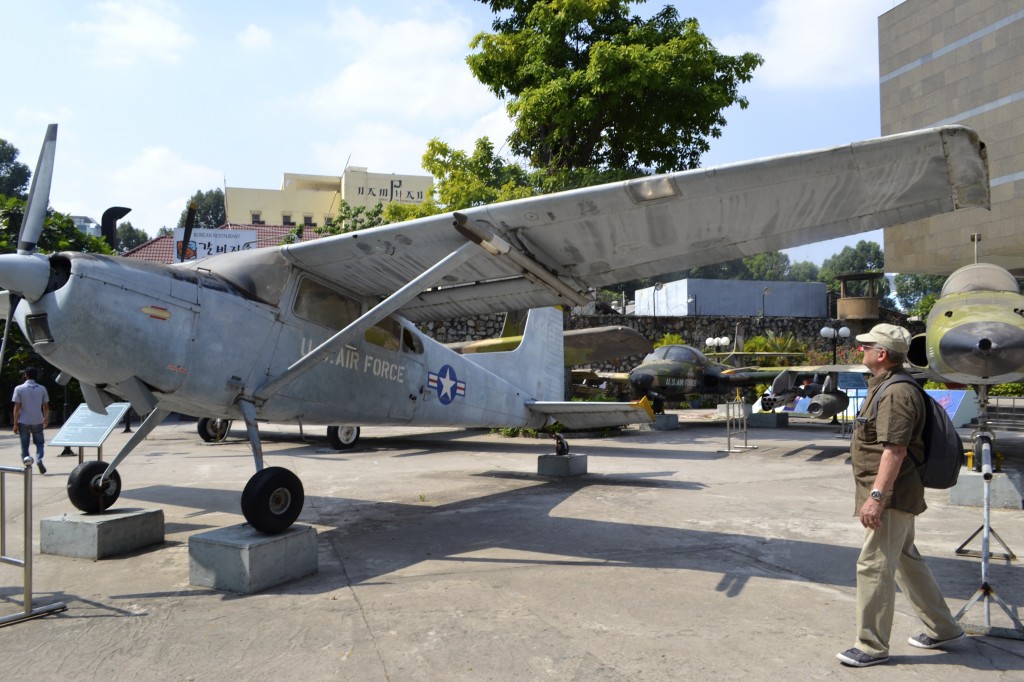 Man gazes up at a plane from the war

As you enter the museum grounds, the outside area is covered in tanks, airplanes and other military vehicles that the Americans left behind. Once inside, the first floor contains excerpts of news articles and photography explaining how the Vietnam War was viewed across the world. There was a very extensive section explaining the American protest against the Vietnam War, which I really appreciated. There was even a large plaque explaining that the Vietnamese held no grudge against the USA and Americans in general, and that this museum existed to document the atrocities of the war and to remember and serve as a warning for the future. The most touching and fascinating aspect of this “news and media” section was a small plaque containing war medals from Sargent William Brown with the quote “I was wrong. I am sorry”. Sargent Brown donated his war medals to Vietnam as a protest against the Vietnam War. 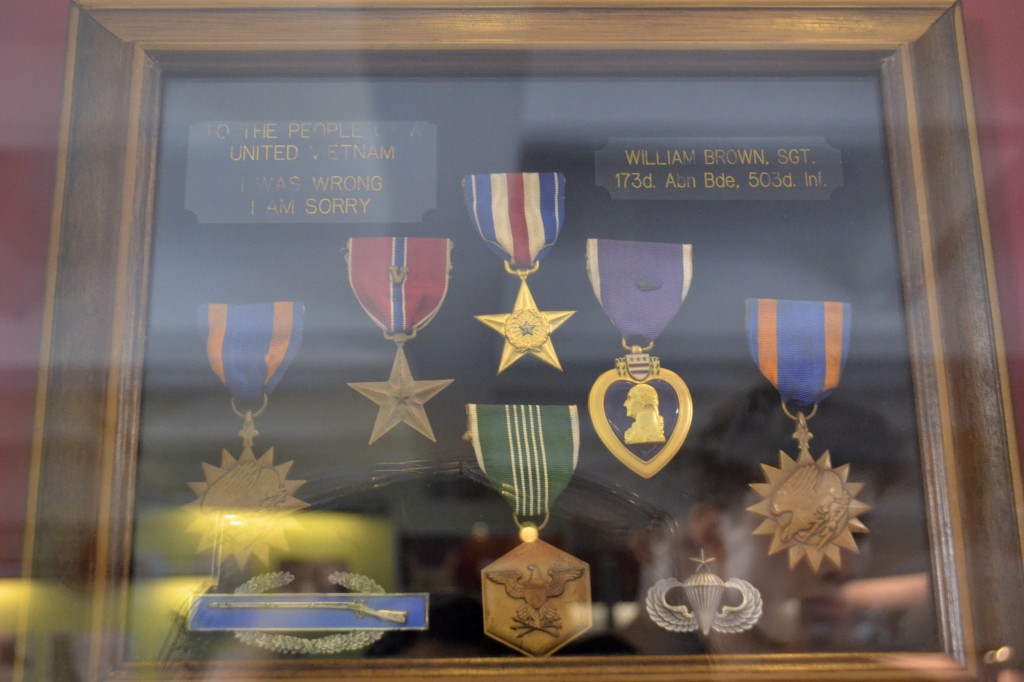 I was wrong. I am sorry.

Upstairs, the museum has rooms dedicated to the atrocities committed by Americans during the Vietnam War, including mass killings of villagers and Agent Orange and its after effects. The museum uses a combination of quotes, photography and statistics to really drive home the point that the war was devastating to Vietnam. I was especially appalled by the photography, taken by American soldiers of corpses and soon to be dead men and children. Photos of naked children running from soldiers and old men cowering in fear before being shot to death are permanently imprinted in my mind. 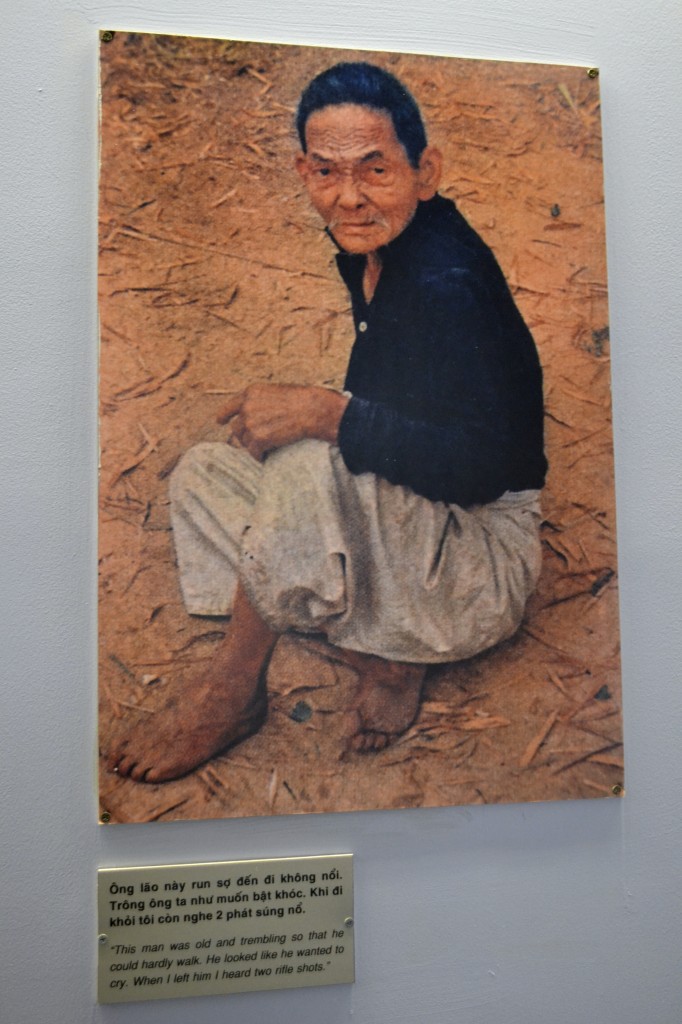 “This man was old and trembling so that he could hardly walk. He looked like he was going to cry. When I left him I heard two rifle shots.”

The most emotional and horrific part of the museum for me was the section on Agent Orange. While I had heard that the use of Agent Orange had demolished forests and caused cancer and birth defects, it is much different to be confronted by photos of the damage your own country has caused. Photographs of forests completely decimated with accompanying stories of full families dying from cancer really impacted me. The water became un-drinkable and the soil burned holes in people’s feet. I also learned that the Americans had no idea what the after effects of Agent Orange would be (similar to when we dropped the Atomic Bomb). 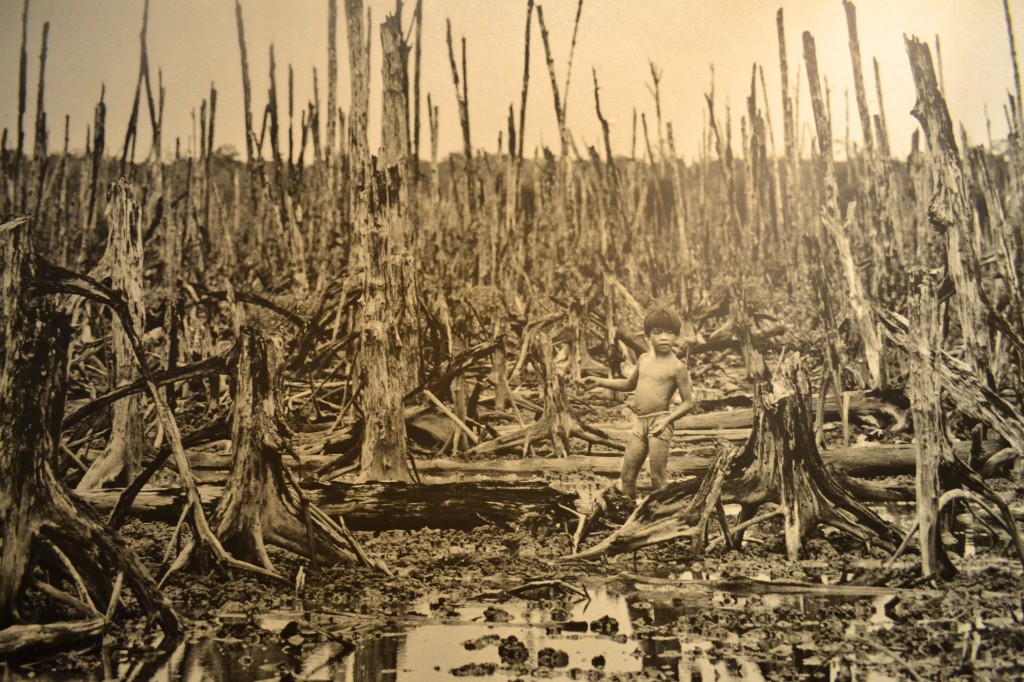 The worst aspect of the museum for me, was an entire room dedicated to birth defects caused by Agent Orange. The room contained photo after photo of children, babies and dead fetuses with shocking birth defects and abnormalities. I didn’t feel comfortable photographing any of the children, but I took my time staring at each photo, letting the images sink in. When I left the room I sat by myself for a moment, wondering if I could handle the rest of the museum.

Being the Bad Guy

In my life I have visited a few museums that have documented massacres, wars and genocides: the Holocaust Memorial Museum in DC, the Nanjing Massacre Museum and the Harbin Germ Warfare Camp. While all of these museums profoundly affected me, it is a completely different feeling knowing you are the “bad guy”. I felt shame, not towards individual soldiers who were just following orders, but towards my government the decisions it has made. I felt shame towards myself for not fully understanding the horrible things my country had done to Vietnam until that moment. 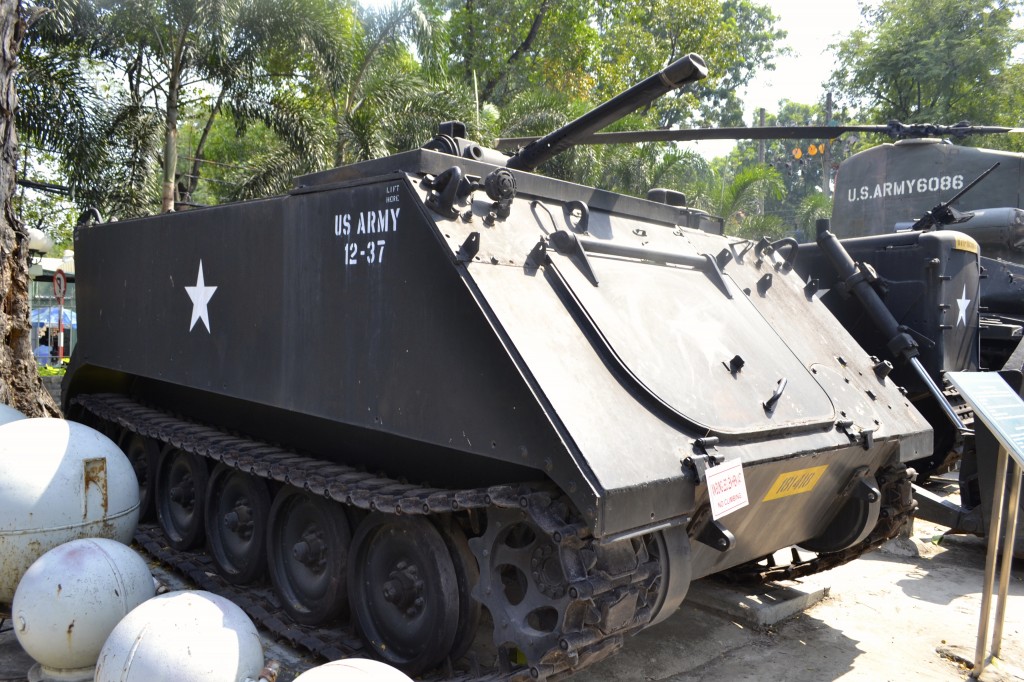 tanks outside the museum

While some visitors tend to think the War Remnants Museum is biased, I disagree. Yes, there were atrocities on both sides, but the Vietnam War affected Vietnam much more than America. The war was fought in Vietnam, meaning that America did not face the same amount of destruction, civilian casualties and after-effects. It’s hard for us as Americans to understand what it is like to have a war fought on our own soil, because we haven’t had a major war take place in America since the Civil War. While we lost many of our own young soldiers, family members and friends, America left Vietnam crippled, with completely leveled cities and villages and a countryside full of deadly toxins.

Is the museum biased in that it does not discuss atrocities committed by the Vietnamese towards Americans? Yes. But in my opinion, it was very valuable for me to experience the retelling of the Vietnam War though the Vietnamese Perspective. It was important for me to see this pictures and read these quotes to fully understand the amount of damage my country has done to Vietnam. 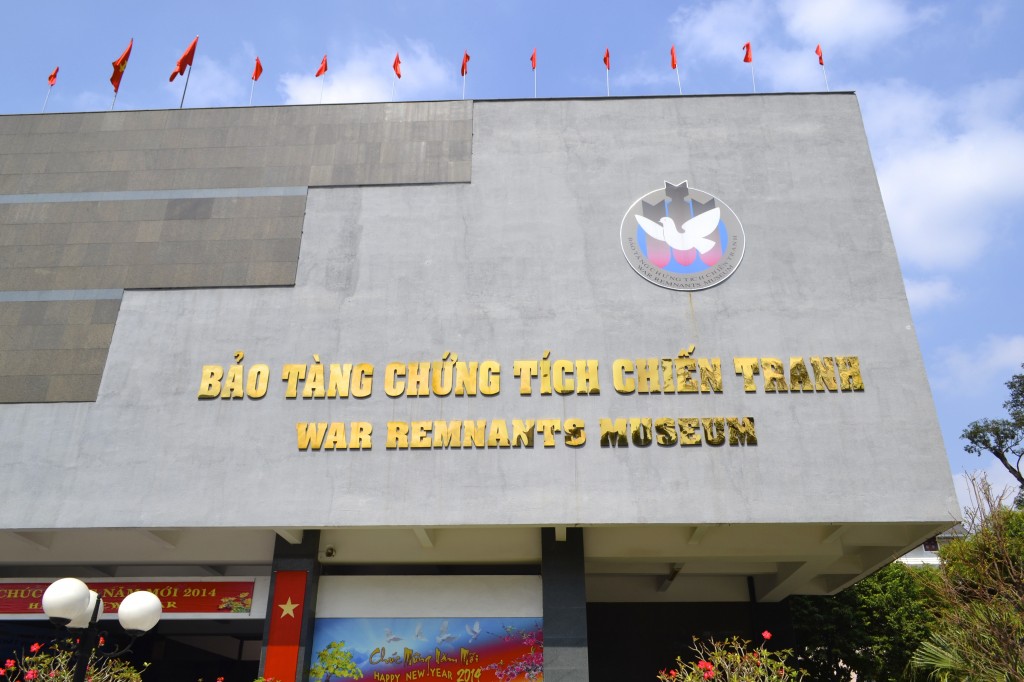 Overall, I was very surprised at the amount of kindness, generosity and openness I experienced from Vietnamese people. I would have thought that with the history of French colonization and the war with America, Vietnamese people would be less receptive to western tourists. Viewing the Vietnam War from the Vietnamese experience made me even more thankful to the Vietnamese people for being so kind and accommodating. It’s funny how life works out. When my father was my age, he was doing everything possible to NOT go to Vietnam, and here I am wishing I could go back.

5 comments on “An American in Vietnam: War Remnants Museum”