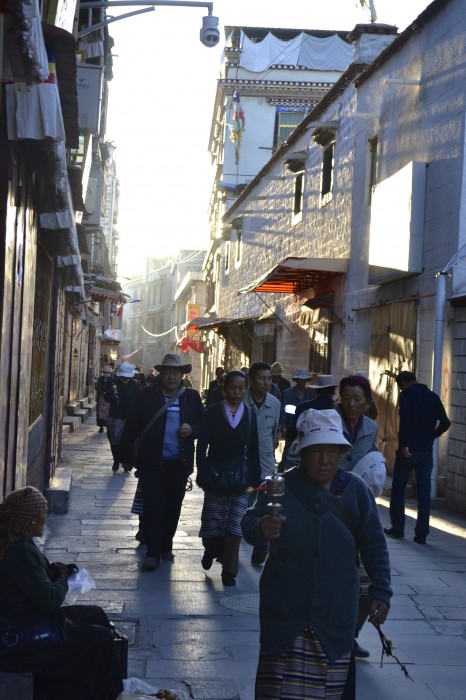 *This post is a continuation of A Day in Lhasa, where I talk about my trip through Qinghai, Tibet, Nepal, Hong Kong and Guangzhou this summer.

The next morning we awoke to a phone call at 6:25am. 6:25?! Crap! We had to be downstairs at 6:30! It turns out the phone call was from Yoko’s mom. Why she was calling at 6:25 in the morning, no one knows, but thankfully she woke us up with just enough time to throw on five layers and run downstairs. That’s the last time I ever trust anyone to set an alarm for me.

The three of us ran downstairs where Kirk and Denzin were waiting for us. We then made the long walk to a nunnery. I walked there like a zombie, craving coffee, exhausted from staying out till past midnight the night before. Why were we seeing a nunnery again?

Eventually we made it to the nunnery, just as the sun was starting to rise. The sun wasn’t high enough to shine above the buildings yet, and it was absolutely freezing in the shade. I wished I had brought a real coat, rather than just a sweatshirt. We lined up outside the door as Denzin knocked… and knocked… and knocked again. No answer. We sat on the curb across the small alleyway street as he proceeded to call them. No answer. He knocked again. Eventually a woman yelled down to him that they weren’t open for another half an hour because of the Yogurt Festival. Of course, the Yogurt Festival.

The four of us huddled on the curb, drifting into a half-sleep, trying not to freeze to death.  After about ten minutes of this, Denzin decided that we needed to get up and walk around, so we went on a tour of the neighborhood. We wandered through cobbled alleyways and crumbling houses. We were accosted by a few small stray dogs, one of which tried to bite Kirk. (Tibet has officially made me frightened of all leash-less dogs). Eventually Denzin took us to a hotel owned by a friend. We entered into the small stone courtyard and I almost thought we were visiting a temple. He showed us one of the rooms on the ground floor and it was amazing; a cozy combination of wood and stone with Tibetan knit blankets and a pristine stone bathroom. It was like Tibetan wonderland! If I ever come back to Tibet with some money I’m definitely staying there.

Eventually we made our way back to the nunnery and they let us inside to wander around the courtyard and the large prayer hall, which looked like one of the prayer hall temples we had seen the day before. After exiting, we still needed to wait for the smaller chapel to open, so we were left to wander the grounds on our own. Since there wasn’t much to see besides a cute garden, we walked back out into the alley and sat shivering. Eventually the silent street began to have more and more people; Groups of older men and women walking with purpose in the same direction. Many of them were spinning prayer wheels and muttering the ohm mantra. What was fascinating about this migration was how fast everyone was walking! Even elderly men and women were hobbling faster than I had ever seen. “Where are they going??”, we wondered together.

Eventually Denzin returned and was able to explain. These people make a pilgrimage from all over Lhasa every morning to the Jokhang temple, the most important temple in Tibet. Every morning. Some walk miles! Most young people who work will only make the walk on the weekends, but older, retired people will go every day. Denzin explained that it gives them purpose. These people use the pilgrimage as a social and community activity, like going to church on Sundays. It also serves as exercise, since many of these people come from very far away. Every morning these people come from all corners of Lhasa, circle around the Jokhang three times, and then return home by the afternoon.

For a long while the four of us sat on the curb, watching everyone walk by at incredible speeds, spinning their prayer wheels and muttering prayers. I asked Denzin if we could spare a few minutes to stop by Jokhang on the way out of Lhasa and see the hordes of people circulating the palace, but he said we didn’t have enough time. I was slightly disappointed because I would have loved to see something like that. I guess that’s the problem with having a tour with a tight schedule.

Finally the chapel was open, and we were escorted inside by a nun. Growing up in a Christian environment, it was very interesting to see a Buddhist nun. She had a shaved head and wore the traditional garb of a Buddhist monk. If I didn’t know any better, I may have assumed that she was a male monk. After meeting her, I realized that the term “nunnery” was only an English-word equivalent of this place we were visiting. These women are not nuns, they are monks- fully equal to their male counterparts in every way. In Catholicism and many other Christian branches, nuns are not priests, and can not be priests. But in Buddhism, women are free to become monks in the same capacity as men, which is something I really appreciated.

2 comments on “Lhasa: The Morning Pilgrimage”