If there’s one thing you need to have on your Taipei Itinerary, it’s the night markets. Whether it’s bustling Shilin, food-centric Ningxia or never-ending Ximending, there’s a Taipei night market to fit every need!

If you’re looking for food, Ningxia Night Market is the place to go. Ningxia is much smaller than some of the other night markets because it doesn’t contain clothing shops and souvenir stands. It also has a higher concentration of traditional Taiwanese snacks, as well as tables to sit at while eating. While tables and chairs don’t sound like a big deal, you’ll learn to appreciate them pretty fast when you’re wandering the other night markets for hours with nowhere to sit. 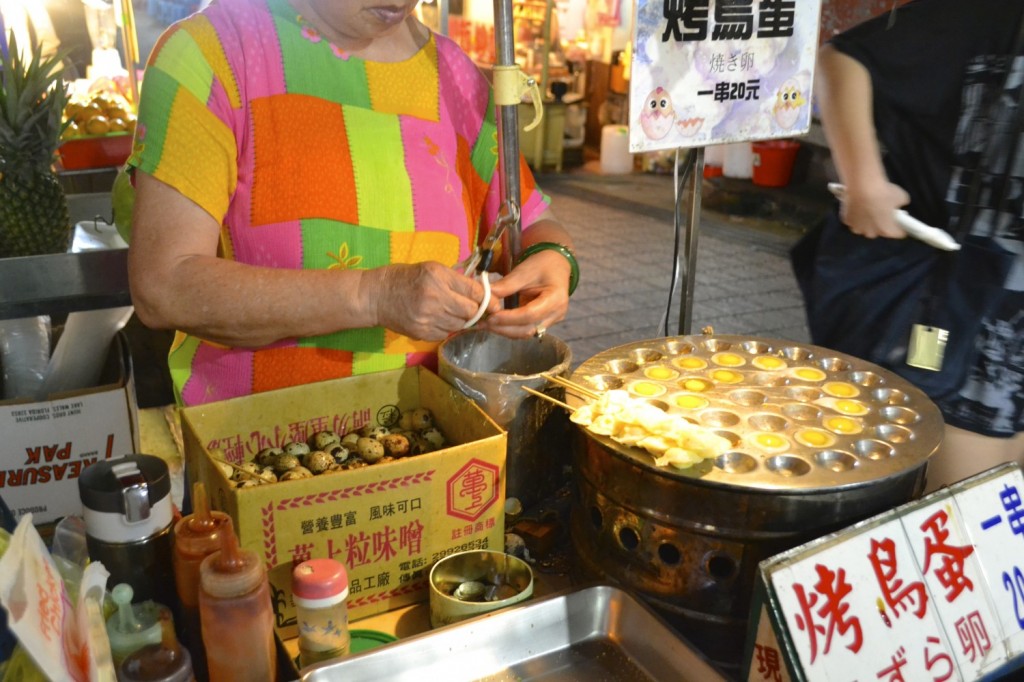 Speaking from experience, the food here is cheap and great. I only wish I had more room in my stomach so that I could try more snacks! This was a common problem throughout my trip to Taiwan, and it even forced me to strategically plan my meals in Tainan, so that I could try all of the famous dishes the city has to offer. 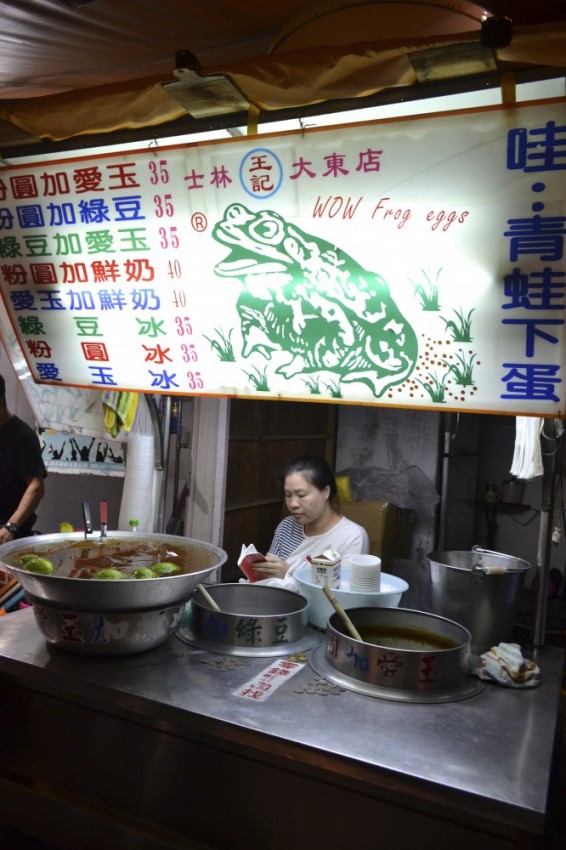 If you’re looking for a bit more “hustle and bustle”, Shilin is the place to go. Shilin Night Market is about five times the size of Ningxia! Bring an empty stomach and a full wallet because this place has everything. This market is full of cool clothing, shoes, bags, luggage, souvenirs and novelty shops. Good thing I don’t live in Taipei or I would be broke from constant shopping!

There are also multiple streets catering to food and sit down restaurants are scattered throughout the market. If you’re looking for an end to the perfect day exploring Taipei, look no further than dinner at Shilin.

I enjoyed this market so much, I went twice! There’s so much to see (and buy, and eat) that you can wander around for hours just looking in shops and trying incredible food. Be prepared for the crowds, though, Shilin is one of the most popular night markets and it is packed with locals and tourists. 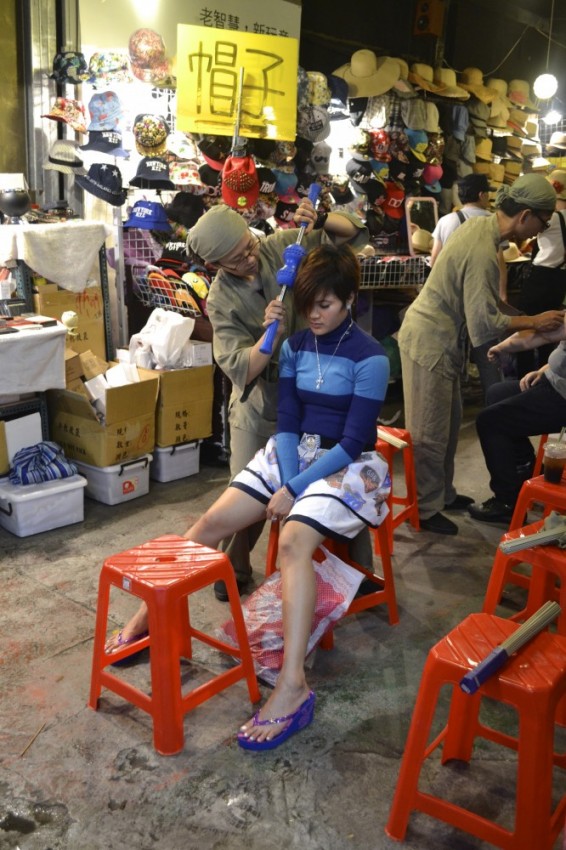 One of the more entertaining things I ran into while wandering the market is a stand selling “dick waffles”. Seriously, they sell waffles, cakes, ice cream and corn dogs all made to look like penises. Surrounding the stall was a gaggle of local Taiwanese girls taking selfless with their inappropriate snacks. It pretty much made my night. 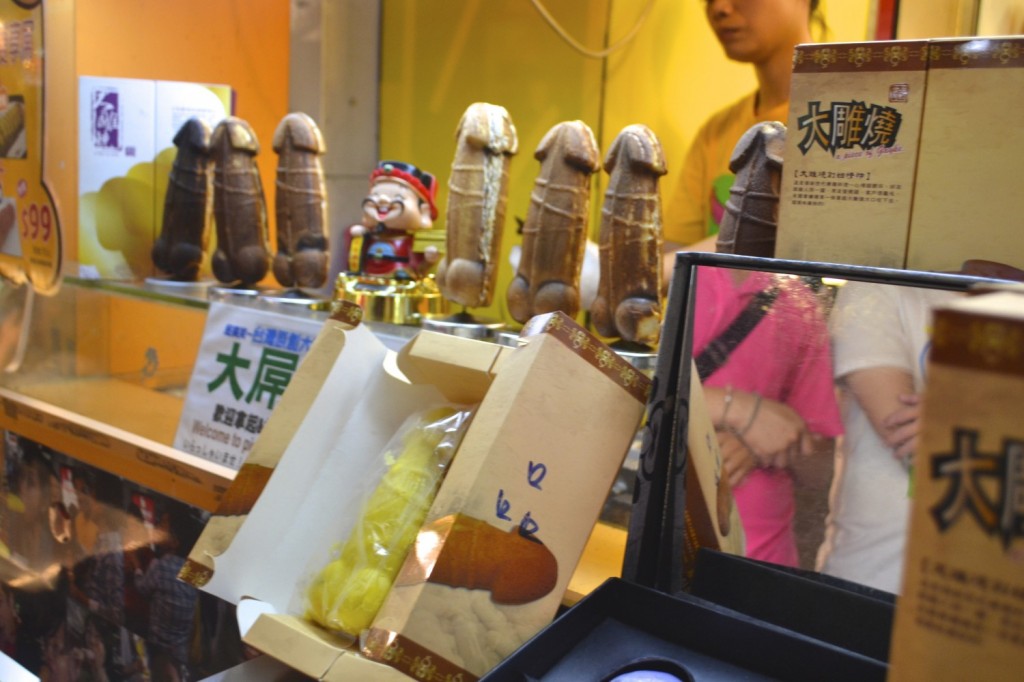 After careful deliberation, we chose chocolate almond and “white party” (as opposed to “black party”, which was also an option). We couldn’t stop laughing at the name, but we had to try the “white party” because we were intrigued by the fact that it contained pop rocks. 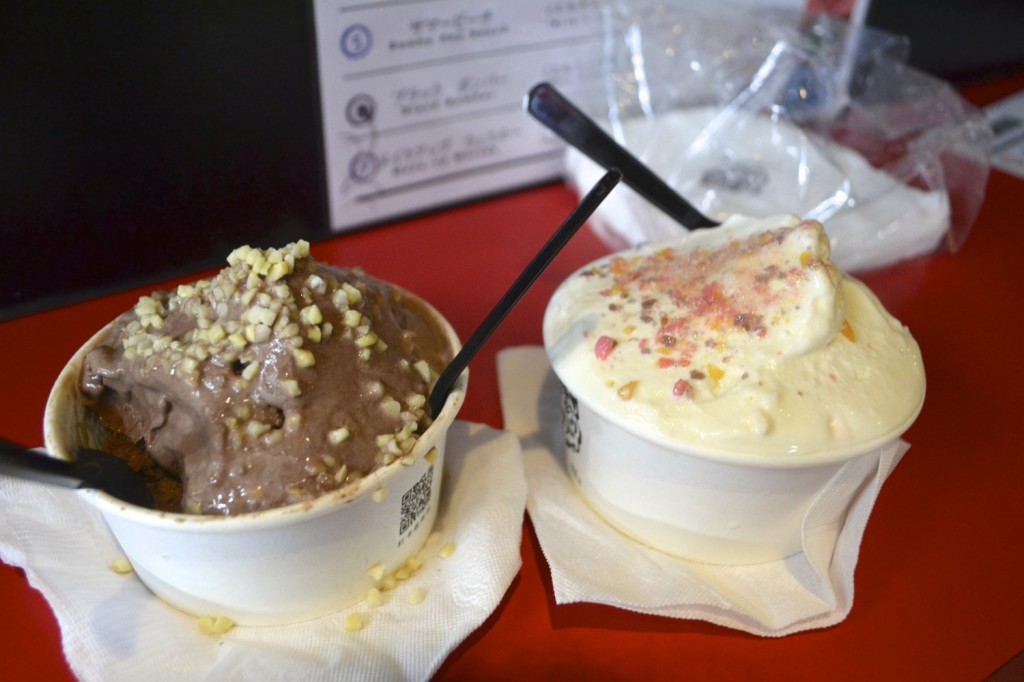 In the neighborhood of Dadong Rd., Danan Rd., Wenin Rd., & Jihe Rd.Hours: 5pm-midnightMRT Jiantan Station, approximately 5 minutes walking (you can see it from the station)

Finally, if you’re looking for a good place to transition from afternoon to evening, Ximen is the place to go. A large outdoor shopping center crammed with shops, restaurants, stalls and cafés, Ximen transforms into a night market when the sun goes down. I spent all late afternoon and evening here, and didn’t run out of things to do or see. I did, however, run out of energy from walking around this place for hours. Ximending is absolutely huge, but it’s much less crowded than the other markets because the streets are larger and more spacious. 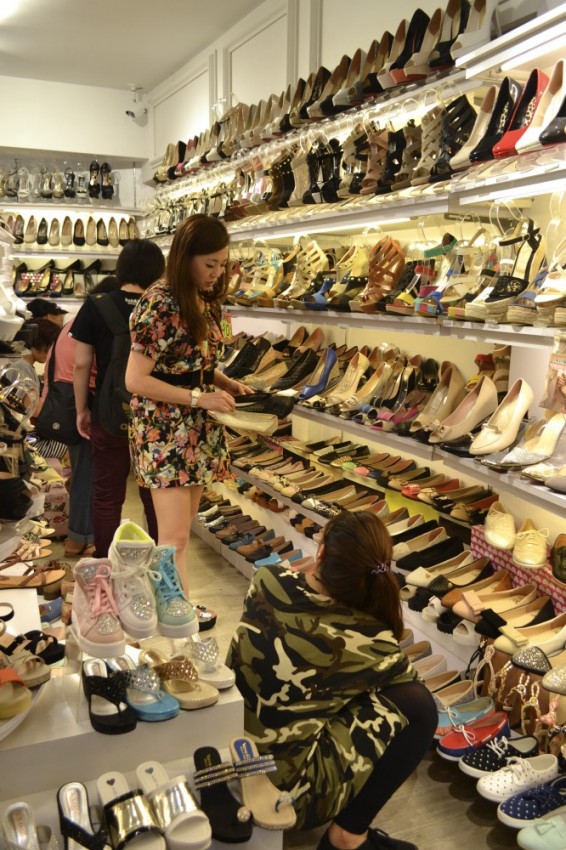 I normally have a hard time finding things I like at bargaining markets in mainland China, but Ximen was packed with cute clothing, shoes, bags, earrings, keychains… basically, anything you could ever want. Called the “Harajuku of Taipei”, Ximen market also has a lot of things you might not find outside of Japan: Hello Kitty stores, Japanese arcade games, cutesy Japanese stuffed animals, anime, etc. You may also run into a few cosplayers at Ximen too! 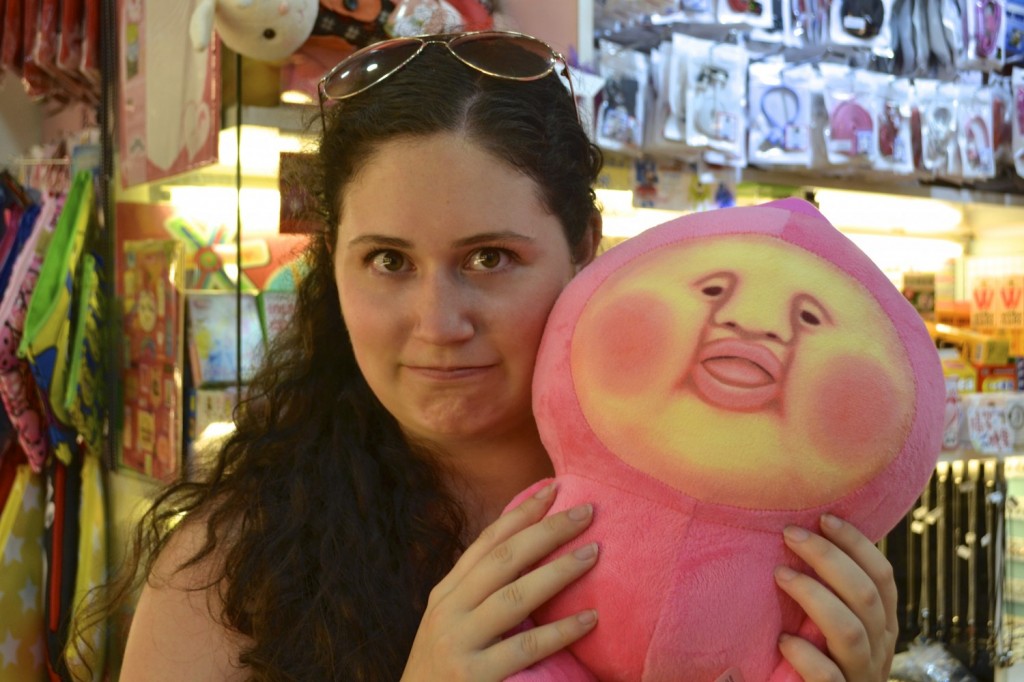 Momo the peach is apparently supposed to look like a butt. He makes me uncomfortable. I don’t understand you Japan.

While Ximending has a few food stalls (that’s where I tried stinky tofu for the first time!), it’s littered with sit down restaurants, cafés and small “hole-in-the-wall” places. If you’re craving Western food Ximending is a good place to get cheap pasta, or you can try some sushi from Sushi Express! Make sure you pick up some bubble tea from one of the many shops, and check out the shaved “snow” ice cream with strawberries or mango!

Want to try the snow ice cream? Here’s my favorite spot! Bonus points if you can find my name written on the wall, 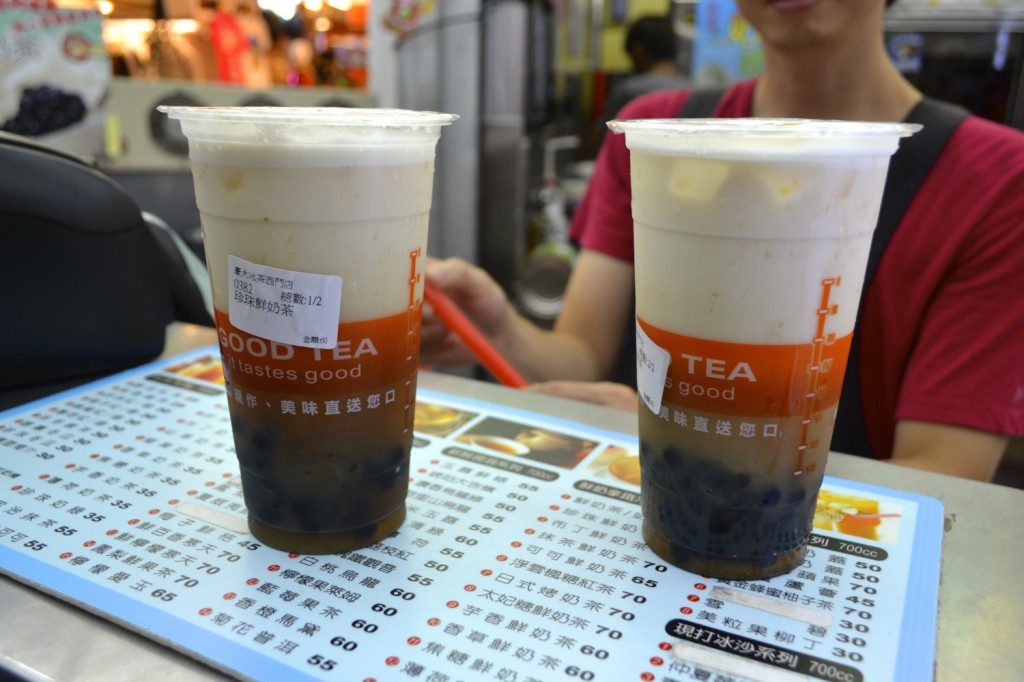 The Ximending area has so much to see, you could easily spend an afternoon shopping, grab dinner and dessert and hit up one of the many clubs and bars in the area. It’s also near the historic Red House, which houses a mini museum and artisan shops. Ximending is also the main LGBT area of Taipei, so don’t be surprised if you run into gay bars and a few “interesting” shops behind Red House.

Hours: shops and businesses tend to stay open from 11am-11:3opm, bars and clubs stay open into the night

MRT Ximending station will take you right to the market