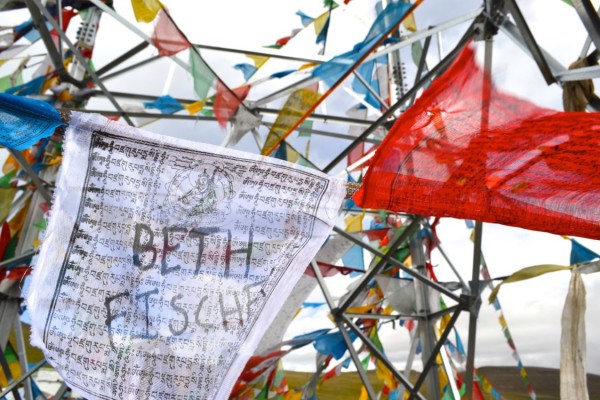 I’ve been wanting to share this story for a while now, but to be honest I wasn’t sure I could tell it properly. I wanted to do this story justice, and I haven’t had the confidence to share such an emotional part of my travel experience.

I’ve made it a goal these last few months to open up more, and share my personal experiences and feelings, because I’m a real person and not a traveling robot on happy pills. My first big step was sharing the story of how I left behind my boyfriend for a life of travel. It took me a long time to find the courage to publish that post.

But this story isn’t all about me, it’s about Beth Fischer, a reader who reached out to me for a favor.

Before we start, I would like to disclose that I received permission from Beth to share her story. 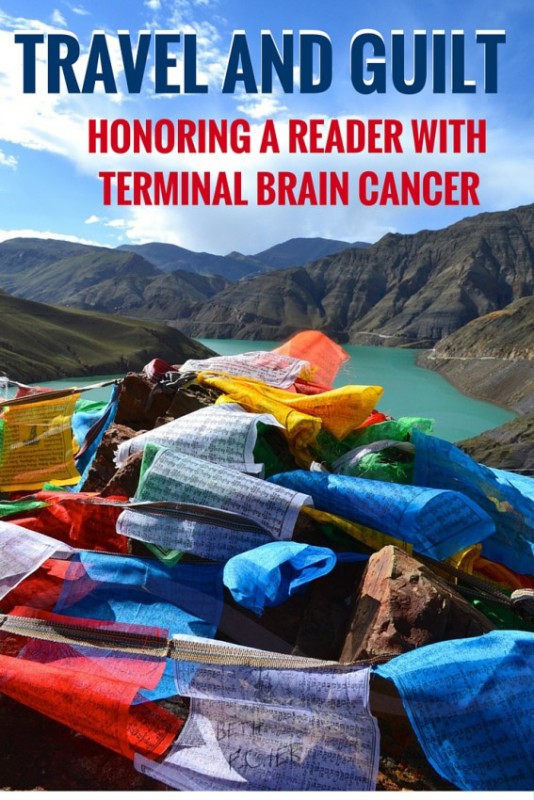 An message from a Reader

A year and a half ago, my blog wasn’t pretty. This was long before I made the transition to a real, self-hosted travel blog. I had a basic, ugly, free wordpress blog that I had been using to write stories about my study abroad experience in China, and my preparations for teaching abroad. I didn’t have many readers, and I certainly wasn’t getting contacted by any of them.

One day out of the blue I received a comment on one of my posts from a woman named Beth Fischer. She had come across a post about my upcoming trip to Tibet, and wanted to ask me for a favor.

“Hi Richelle, I came across your blog while googling the GuiLin Mts for a painting. I’ve always wanted to travel to China – since I was a little girl growing up in Ohio. ( I even took Chinese in my early 20’s – i’m now 58) I now live 1 hr south of you in Olympia. As I am living with stage4 cancer (now to the brain-yikes!) I won’t be going to China.  So I take refuge in your going and exploring this amazing culture. As a long time student of Buddhism, going to Tibet would be a highlight for me.  May I make a bold request?(for healing) if it feels right to you, could you leave my name at some shrine you visit along your journey?”

I was shocked. I felt so honored to receive such an important request. I even teared up as I read the comment. Of all people for her to reach out to… me, a study abroad blogger with a crappy free wordpress blog and almost no following. People like me don’t get requests like that. Girls like me don’t get to grant people’s wishes.

Before Beth reached out to me, I had been considering abandoning my trip to Tibet. Planning a trek in Tibet is very difficult and expensive. You have to find a tour that won’t break the bank, buy overpriced train tickets off the black market, prepare your body for the altitude, and apply for special visas and permits. But after I received the comment from Beth, I knew I had to make the trip work no matter what. 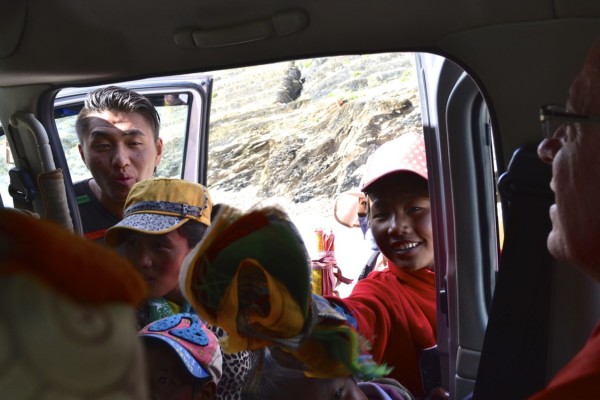 Fast forward a few months later, and I’m driving through the mountains of Tibet. I knew I had to do something special for Beth, but I wasn’t quite sure where to leave her name. As we were winding our way through the mountains, listening to Tibetan music on full-blast, we saw a few men hanging prayer flags. As we neared the pass, we noticed that it was absolutely covered in colorful strands of flags. Our guide, a practicing Tibetan Buddhist, explained that if you write a person’s name on a set of prayer flags, it acts as a prayer for the health and wellbeing of that person. The higher up in altitude the flags, the stronger the prayer.

I immediately knew that hanging a strand of prayer flags was the perfect way to honor Beth in Tibet.

As we stopped the car at the Yamdrok Tso Pass on Turquoise Lake, our car was swarmed with children trying to sell us flags. I purchased one to leave at the Turquoise Lake, one of the most beautiful places I have ever seen in my life, and another set to leave at Gyatso, the highest pass we would encounter on our trip. 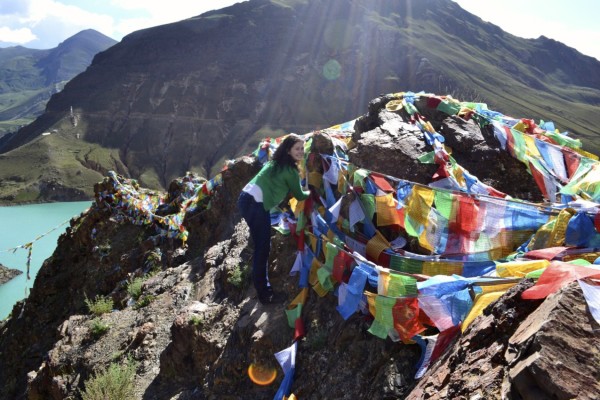 While at Yamdrok Tso, my friends and I hiked out to a far peak that was covered in prayer flags. The hike was a bit dangerous. One misstep and I could easily fall to my death, which I almost did at one point. When we finally made it to the rock, I borrowed a sharpie to write Beth’s name, and hung her flags so that they overlooked the most beautiful view.

As I was tying the flags, a wave of emotions washed over me. I felt a bit entitled and privileged, for having the health and ability to embark on such an amazing trip, while Beth was at home struggling with terminal cancer. I also felt so incredibly thankful and appreciative that I have the ability to leave my home country, when so many people can’t. What makes me so special?

Finally I felt honored. Honored that Beth asked me of all people to complete such a special task for her. I just really wished Beth could have been there to see it. 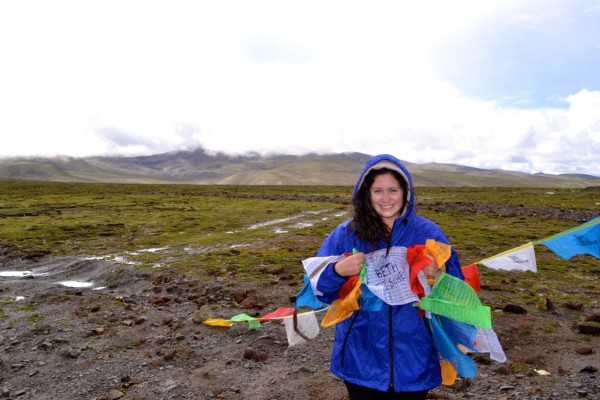 After I left Tibet, I compiled all of the best pictures together and emailed them to Beth. I sent her a lengthy email explaining the reasoning behind the prayer flags, and describing in detail where I hung them. I checked my email every day, and after a few weeks I began to get worried. Was I too late? Had she passed away?

Eventually a month later I heard back from her. She had been experiencing seizures and was in and out of the hospital. She told me she had made the photo of me tying her prayer flags in Yamdrok Tso her computer’s desktop picture. I can’t even begin to describe the emotions I felt when I received her email. I was thankful that she was still alive, and so honored that she would use my photo as her desktop background. 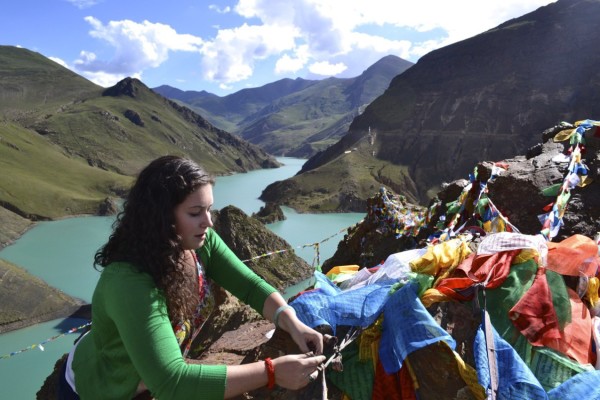 I exchanged a few more emails back and forth with Beth, but eventually we fell out of touch. I was starting work as a high school teacher in rural China, and things weren’t going very well for me. I was lonely and depressed, isolated from everyone and I had no friends. It was not the experience I had signed up for, and I felt manipulated and lied to by my company.

It wasn’t until a few months later that I realized I hadn’t spoken with Beth in a while. I logged onto my email and realized I had left her last email unanswered. I shot her a quick reply, but I never heard back. I was so busy teaching English and dealing with my own personal problems, I completely forgot about it.

About a month ago I was asked in an interview about my most meaningful travel moment. Immediately the story of hanging prayer flags for Beth sprung to mind. It had been so long since I’d even thought about it!

After the interview I realized I had never heard back from her after the last email I sent her. I knew something was wrong. I noticed in one of the emails she had sent me a link to her husband’s blog, where he wrote about the process of losing her. I opened the blog and the first post is a poem titled “The Widdower’s Walk”. Beth had passed away. Beth had died, and I had been too busy dealing with my own petty problems to even notice.

I scrolled down further and realized she passed away on December 6th, a few weeks before I responded to her email. I had let her email sit unanswered in my inbox for two months. While I was sitting around feeling sorry for myself, Beth was dying. I was too selfish to make time to respond to her email, and by the time I realized, it was too late. 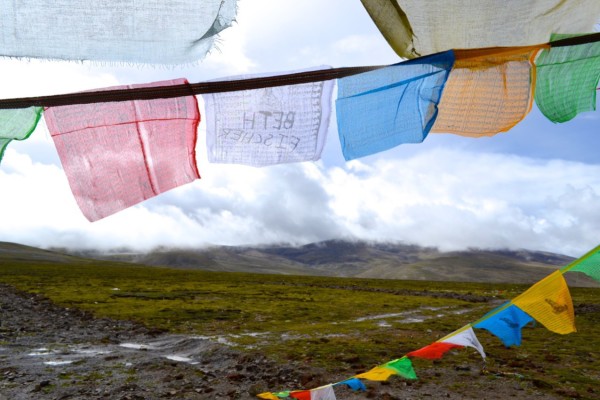 Looking to the Future

Beth is an amazing artist. While Beth couldn’t travel to Tibet, she painted two beautiful acrylics of a Tibetan monastery in Northern India. She also has many other beautiful paintings of animals, flowers, Buddha and more. This one is my favorite.

I’ve realized I can’t go back in time and become less selfish. I can’t rewind the clock and send her that email a month earlier. There’s nothing I can do about either of those things now. I can sit around hating myself all day, but it’s not going to change anything.

But what I can do is share her beautiful artwork and incredible story with you.

My hope is that you leave this post with a newfound resolve to live life to the fullest. You never know how much time you have left on this earth with those you care for. Let’s make a pact to stop putting things off. Whether it’s responding to an email, starting a business or planning a round-the-world trip. Don’t wait an extra day to tell someone you love and appreciate them. Stop putting travel off until you “have more money”. Life is short, so let’s live it without regrets.

60 comments on “Beth Fischer: The Story of a Woman with Terminal Brain Cancer”