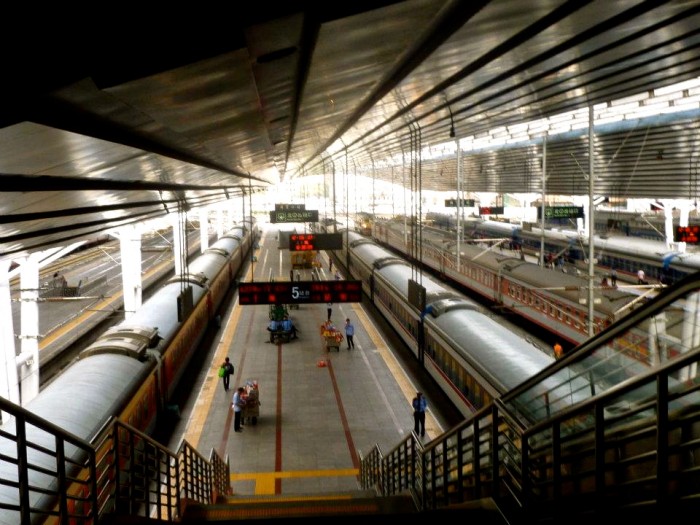 This year, the Chinese government gave everyone Wednesday January 1st off for the Western New Year. Since I work at a boarding school, the administration wanted to give the students Thursday and Friday off as well, so that they could go home to their families. But, since I also work at a public school, we’re required to follow the government holiday schedule. To make up the difference, we had classes the weekend before the New Year to make up for taking Thursday and Friday off. Since I had been in the hospital, the school didn’t make me teach, thank god- not that I could have done anything besides show a movie anyway because I had also completely lost my voice.

The only problem with my holiday? No one else had one. While I’ve traveled by myself twice (once to Guangzhou this summer and once to Hong Kong for my visa in September), I don’t really like it. Some people really enjoy traveling by themselves because they can do whatever they want, go wherever they want and see whatever they want to see. I think traveling by myself is fine. It kind of makes me feel like I live in that place, which is an interesting feeling. But because of my location, I’m already always by myself anyway. I live by myself, I eat most meals by myself, I go grocery shopping by myself, I watch movies by myself, I wander around the city by myself, I take long cab and bus rides with myself- I’m ALWAYS by myself. After a rough month of missing Christmas and getting food poisoning, I needed a vacation. So where to go?

My first thought was Nanjing. It’s only a $30, 2 hour train ride away. I have a friend studying in Nanjing, and a few AYC acquaintances, so I got in touch with everyone I knew to see if they wanted to hang out. My friend studying in Nanjing was in the middle of studying for his finals, my orientation AYC friend was traveling, and I never heard back from my other acquaintance friend (his VPN was broken so he couldn’t see my Facebook message). Awesome, so I can go to Nanjing and maybe have someone to meet up with.

Tuesday afternoon after the Talent Show, I was trying to figure out what to do. I was still feeling a little sick, so I figured I would rest on Wednesday and leave for Nanjing on Thursday. Then suddenly I got a text from my orientation friend Miller who is in Hebei province. He and Valya, the other foreign teacher at his school, were staying in Beijing  the week. Since they work at a college, they had already finished classes for the semester and were staking it out in Beijing to avoid the horrible administration that was purposely making their lives a living hell because Miller decided to leave a semester early and go back to America.

The two of them texted me and urged me to come to Beijing and show them around. I felt conflicted. I’ve lived in Beijing twice, and it’s a very long and expensive train ride to get all the way up north… But after a horrible month, a fun weekend with friends was exactly what I needed.

I’ve been in a rut in Ningbo. I live in the middle of nowhere, and it’s such a hassle to meet up with friends. I also feel like because I live so far away, most people have bonded with the other AYC teachers near them, and I’m stuck in the middle. It’s always a giant ordeal every time I want to go anywhere, and whenever I meet up with the other AYC teachers in the city or in Beilun I can’t help but let my jealousy overshadow the fun I’m having. I hate being that “Why me??” person. I try to remind myself how much I’ve grown this year, but it’s been really hard. I don’t want to feel angry and jealous every time I visit my friends, and I didn’t come all the way to China to sit in my room and watch TV on my computer every night because there’s nothing else to do near me. I needed a vacation. I needed to remind myself of how much I love China, and that I can easily get a job in Beijing and be happy next year. I needed to take a trip to my “China home”.

The next morning I woke up at 9am, slightly hung over from my one large draft beer. I guess food poisoning will do that to you. I hung up the socks I had washed the night before at 2am (because I realized I would have no socks for Beijing) and went back to bed for another hour. Around 10:30, I forced myself out of bed and started packing for five days in Beijing. I grabbed my Rick Steves Travel backpack and stuffed all of my students’ scripts (for their final exam skits) into a tote bag. The goal was to get on the last train at 2:45 to Beijing. It was a 7-hour train and would get in around 9:30.

I left a little before noon and hailed a taxi with people already inside (it’s illegal but it’s impossible to find cabs on my street when you need them). After dropping the other people off, the cab driver headed in the direction of the train station. As we approached the station, I started to grab my backpack… but the cab driver drove right past the street. What?!!

“Isn’t the train station back there??”, I asked the cab driver.

“You want to go to Ningbo South Train Station right??” he asked.

“No… There’s only one train station in Ningbo and it’s called Ningbo East Train Station… It’s back that way.”

“No, no, no! There is no train station back there.”

What? I’d been to that train station multiple times. Where was he taking me??! I decided to call Lynn.

“Oh!” She exclaimed. “We have a new train station now, it opened this week.”

Ningbo South Train Station was much further away than I expected, and I started to worry I wouldn’t get a ticket. So much for being close to the train station… Now I’m officially far away from everything. Thanks Ningbo, thank you so much.

Eventually we got to the train station and it was very fancy! Not only was spotless and 10X the size of the old train station, it was also much more organized. Our old train station was a dump. It was way too small, and barely had enough seats for half the people there. The floor was dirty, stained concrete and the smell of the bathrooms wafted into the main room. There was A McDonald’s and a small convenience store. The new train station had multiple restaurants and shops and was sparkling clean… although they didn’t sell ramen, which was frustrating.. so I grabbed a muffin, potato chips and a large yogurt for dinner.

Getting a ticket was extremely stressful. I stood in line for almost an hour. At first I realized that the line next to mine was a whole line of cutters.. as in it was an entire line of people cutting into my line at the front. When the woman in front of me realized  this, she hopped over into a different line and I joined her. A security guard walked around the crowd multiple times and not once did he tell the line of people cutting to disperse. Really? The new train station really needs some metal bars near the front to stop people from cutting in. Eventually I made it to the front and tried to buy my ticket.

“Ticket purchase is downstairs”, the woman said. “This is for people who have bought tickets online”.

What??!! I didn’t even know there was a downstairs. “I’ve been standing in this line for an hour!”, I exclaimed. “Please, my train leaves in an hour and a half, please let me buy a ticket here!!”. She grabbed her manager and the two of them took pity on me and let me buy my ticket. Thank god.

The train ride to Beijing was pretty uneventful. I got on the bullet train that runs from Ningbo to Beijing. Apparently there are two bullet trains: one that goes from Beijing to Shanghai and one that goes from Beijing to Ningbo; This one goes through Hangzhou and skips Shanghai. Good to know. I took the opportunity to get a few snapshots of the scenery out my window before we got to Hangzhou and the entire train filled up. I think I may have been the only person on the entire train that rode the whole way from Ningbo to Beijing, because flying isn’t that much more expensive. Most people either fly from Ningbo or take the train to Hangzhou or Shanghai and fly from there.

While I was on the train, I called and booked a hostel near the one Miller and Valya were staying at, because their hostel had no room. Like I said, the trip was not planned.

I eventually got into my hostel a little after 10, and spent the evening in Miller and Valya’s hostel across the street, drinking red wine and Chinese tea.

Previously, I would say the most spontaneous thing I’ve ever done was plan a weekend in Shanghai the night before. While I was studying abroad in Xi’an, my friend Margo and I realized that the next weekend would be our last chance to go to Shanghai. The only problem? We were currently on a field study trip in Xinjiang. We literally got home, and in one day we booked a flight and a hostel and left at 6am the next morning.

While that was pretty spontaneous, I think this trip beats my weekend in Shanghai because we at least decided to try to go to Shanghai a few days before our trip while we were in Xinjiang, and then bought our plane tickets and booked our hostel the night before. This time I didn’t decide to head to Beijing until the night before, I didn’t book a train ticket in advance and I booked my hostel a few hours before I showed up.

While I like to consider myself pretty adventurous, I think I tend to have “planned adventures”. I like to map out my travel plans and book everything ahead of time. But every once and a while a little spontaneity is good for you.

Unrelated: Does ANYONE know what these metal spires on top of the houses near Hangzhou are? Literally almost every house has them. TV satellites? Russian-style decorations?

2 comments on “My Spontaneous Trip to Beijing”