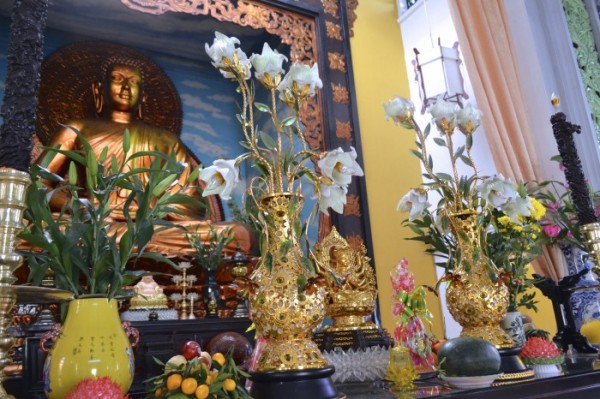 After a few days in Hanoi, the group of us headed  out to Saigon, otherwise known as Ho Chi Minh City. We got a pretty cheap flight, and arrived mid-afternoon. Once again I was in a different hostel, and unfortunately I didn’t get upgraded this time. My room was a huge dorm room of 10 people, with white metal beds and a lot of open space. In the past when I imagined hostel rooms, this is pretty much what I pictured. The hostel itself was pretty cute though; located in a back alley, it was impossible to find but I liked that we had to remove our shoes inside. It felt like a little home wandering around barefoot.

That evening I wandered over to the others’ hostel, located on a packed bar and restaurant street. We wandered until we found a small street food place and Victoria, our Vietnamese-American friend exclaimed, “STOP! We have to eat here”. Victoria had yet to lead us astray when it came to sampling Vietnamese cuisine, so we clustered around the stall selling co’m tan su’on, or “ribs broken rice”. While the name was a little odd, the smell coming from the tiny stall was mouthwatering, and it was physically painful to wait for the food to arrive. Eventually a young boy darted across the street handing us plate after plate of pork ribs over rice complete with raw vegetables and an amazing fish sauce. It was so good we joked that we would offer free English classes to the son for a mattress on the floor and free daily meals. 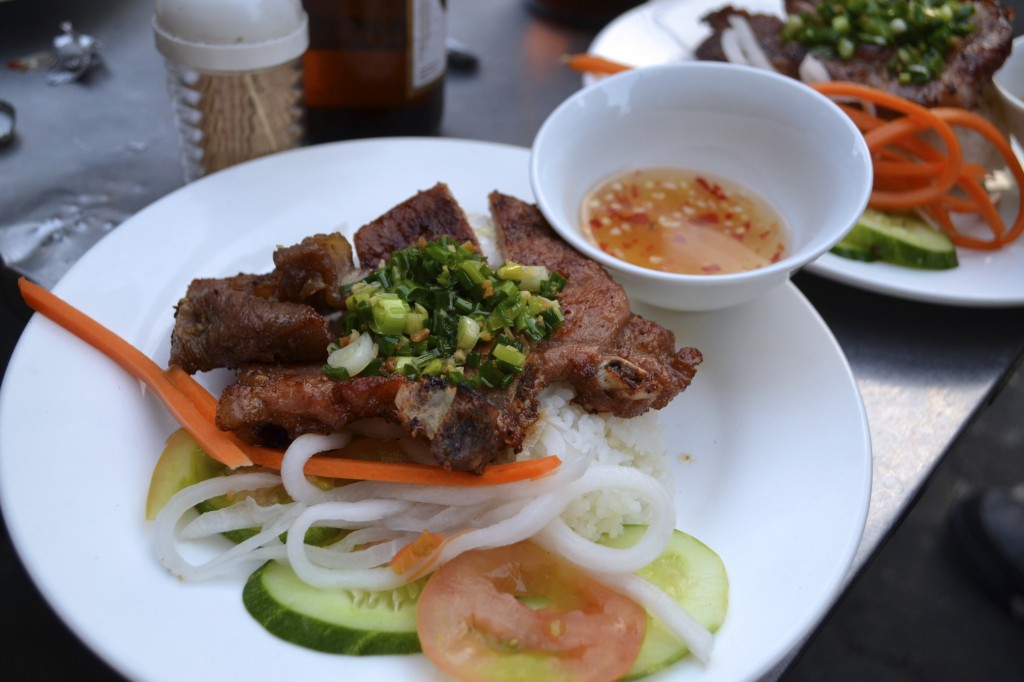 The next morning I wandered downstairs for a complimentary breakfast. After a very confusing exchange with the hostel owner who asked if I wanted “jam toast or ham toast” over and over again to no avail (I could not for the life of me understand what he was saying), I sat down and enjoyed my eggs and “jam toast”. I eventually became friends with a Finnish solo traveler through laughing at the fact that every single person that came downstairs could not understand the “jam toast ham toast” question. Maybe the hostel should type up the breakfast menu and display it on the counter?

While a few people in our group headed to the beach, the other half and I set out to explore the city. I have to say, two full days in Ho Chi Minh is not enough, especially since venturing out to the Mekong Delta takes a full day. Since I was not involved with the trip planning at all, I had little say in the hectic schedule. I was a little upset I went all the way to Vietnam and didn’t even get to see the beach! I also missed out on all of central Vietnam. I learned my lesson though: I need to plan my own trips, regardless of if other people come or not. As much as it’s fun to travel with your friends, now I need to go back to Vietnam because I didn’t get to see half the things I wanted to see… or eat half the things I wanted to eat. 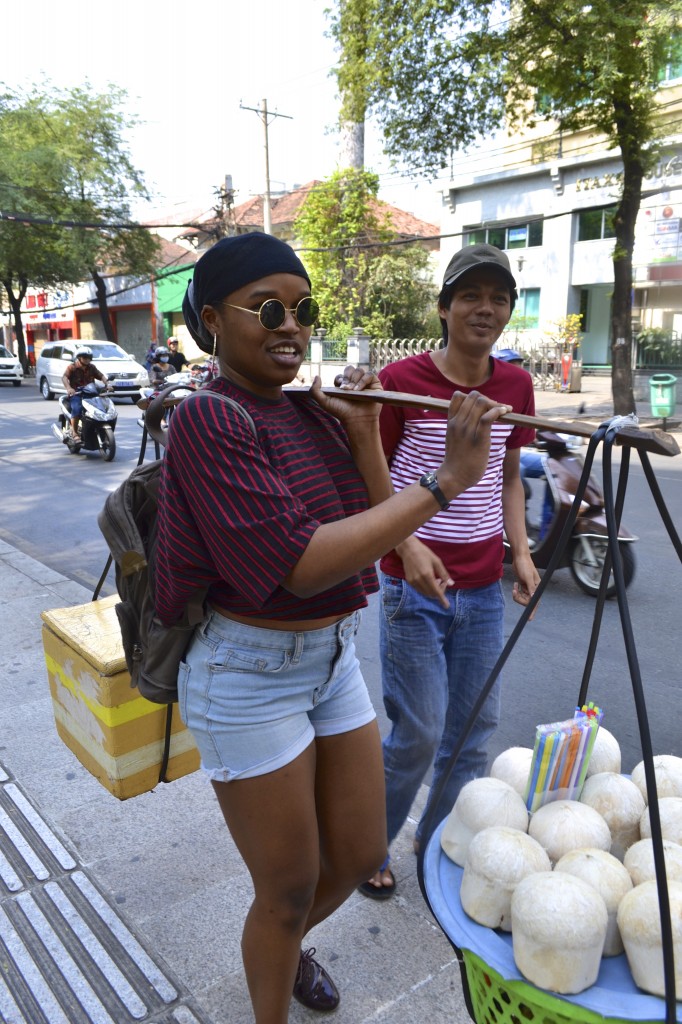 making friends with a coconut seller, he let us all carry his load and it was so heavy! Of course we all bought coconuts afterwards

The great thing about Saigon is that you can walk almost anywhere. The group of us, with our new Finnish friend in tow, explored the War Remnants Museum and a beautiful pagoda, and had iced coffee and street food for lunch. The pagoda was very interesting because it was slightly similar to a Chinese temple, but the decoration and feel was much different. I also had to remove my shoes, which you almost never need to do in a Chinese temple. The War Remnants Museum on the other hand, was a very emotional experience for me as an American. I have so much to say about this museum so I have decided to include it in another post so I can really go into the detail this museum deserves. 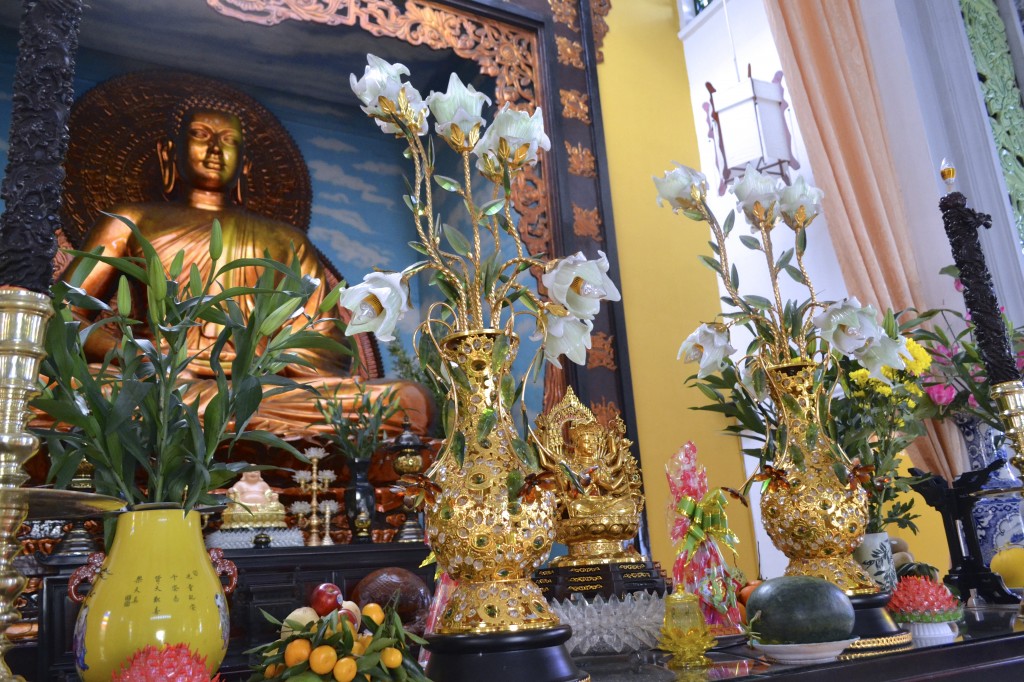 After a long day of wandering, my Finnish friend and I scoured the local market for some fruit. We eventually grabbed a dragon fruit and some grapefruit as an afternoon snack. When we brought it back to the hostel and asked the owner if she had a knife, she took the grapefruit and brought it out of the hostel and down the street to her grandmother who cut it up nicely for us! I honestly have never seen grapefruit cut so expertly in my entire life. To top it off, the owner handed us a small bowl of salt to dip the pieces in which she informed us was the traditional Vietnamese way to eat it. When in Rome, do as the Romans do! I tried the salt and really enjoyed it! I’ve had salt and tomatoes before but never salt and grapefruit. The salty sweet flavor was delicious and I can’t wait to try it again. 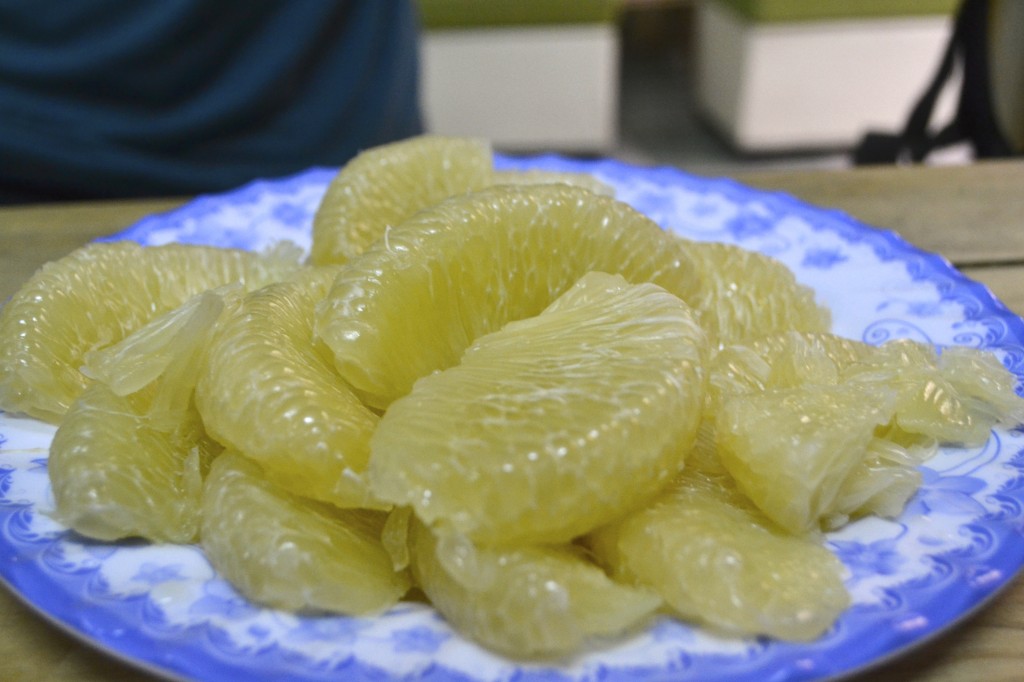 That evening we decided to eat some traditional street seafood (who actually eats at a real restaurant in Vietnam anyway? Not me!). There were so many different types of seafood it was hard to choose! Because of the price, we eventually decided to get a few plates of clams and snails as an appetizer and go back for some “ribs broken rice” for our real dinner. The seafood was incredible and I wish I would have splurged and made it my whole dinner. Better than the seafood itself was the dipping sauce: salt and pepper with chill and lime. It was so amazing, I could eat it with anything! 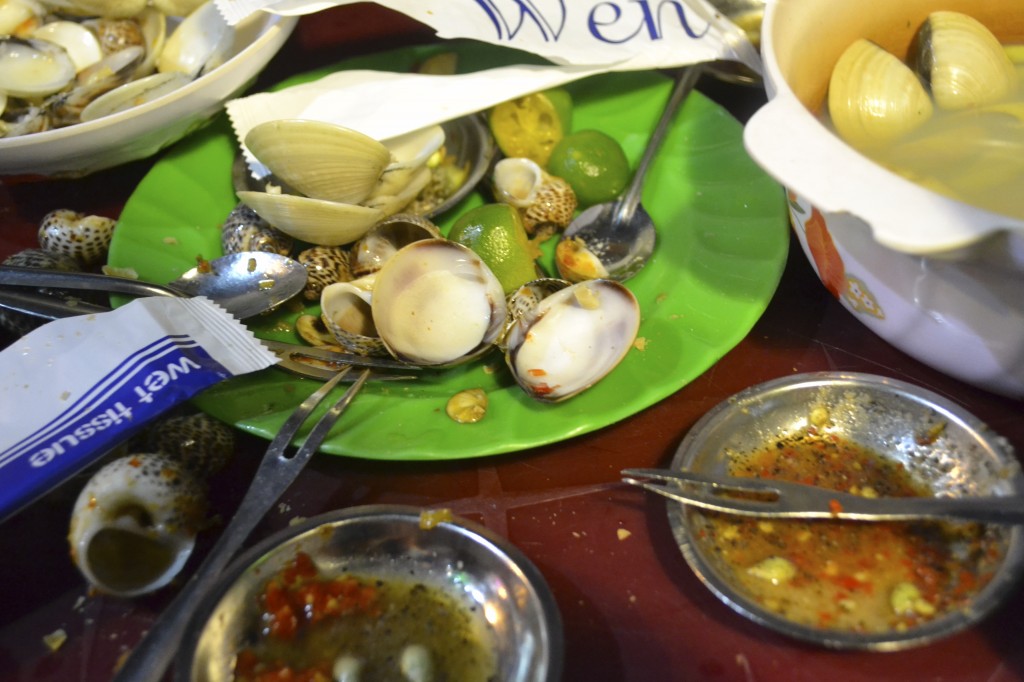 The aftermath of our appetizer

Our final Saigon city adventure was an evening in the flower market. This market was packed with small mandarin orange trees for the Lunar New Year, or Tet as they say in Vietnam. It was amazing to see this market bustling in the evening. After wandering through the market we made our way to a larger indoor-outdoor food and goods market. While I didn’t find any souvenirs to my liking, I did help a friend purchase her own genuine weasel coffee. I’m telling you guys, weasel poop coffee is actually the best. After wandering the market we returned to have drinks in the backpacker area where we were entertained by a boy who literally stuck two small snakes through his nostrils and out his mouth. It was absurd and disturbing and I felt very bad for him and the snakes, but he did get roaring applause from the backpacker crowd, and a lot of money from the drunk onlookers. 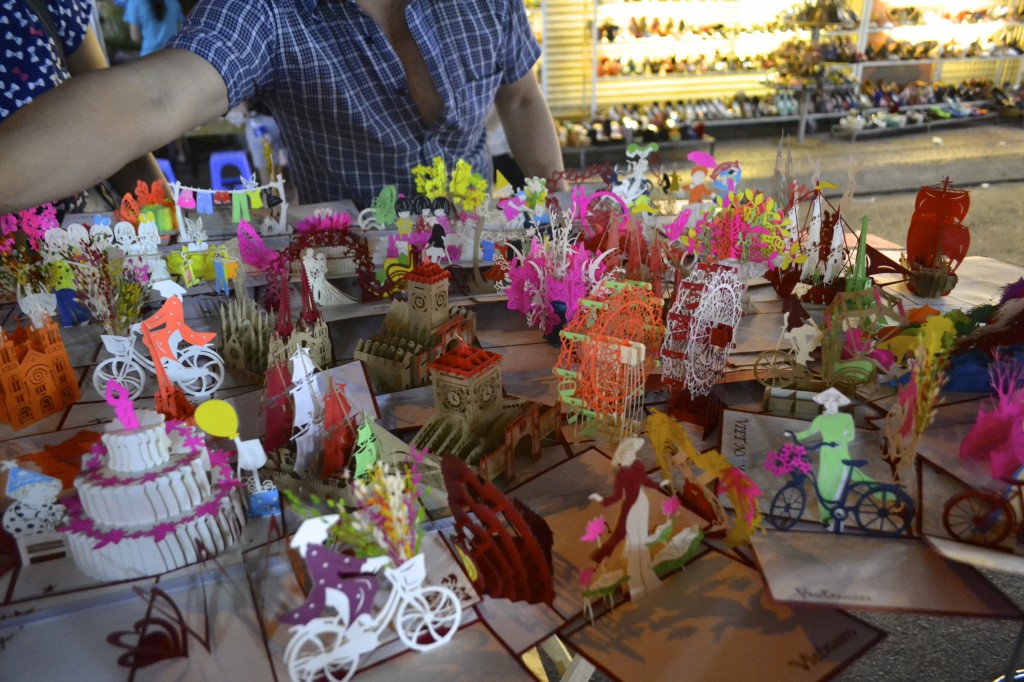 pop out paper cards at the market- a popular souvenir

If you’re planning a trip to Saigon, or are just interested in learning more about Vietnam’s culture (and food!), I suggest you check out a new favorite blog of mine, Legal Nomads. A former lawyer, Jodi left her profession to travel the world. She lived in Saigon for an extended period of time, doing food tours, designing t-shirts, writing books and blogging to fund her travels. I really wish I would  have found her blog before I went to Vietnam because I would have definitely signed up for one of her food walks. Jodi just recently left Vietnam to travel Europe but if I ever visit a city where she is living I will definitely go on one of her food tours. This girl loves to eat. 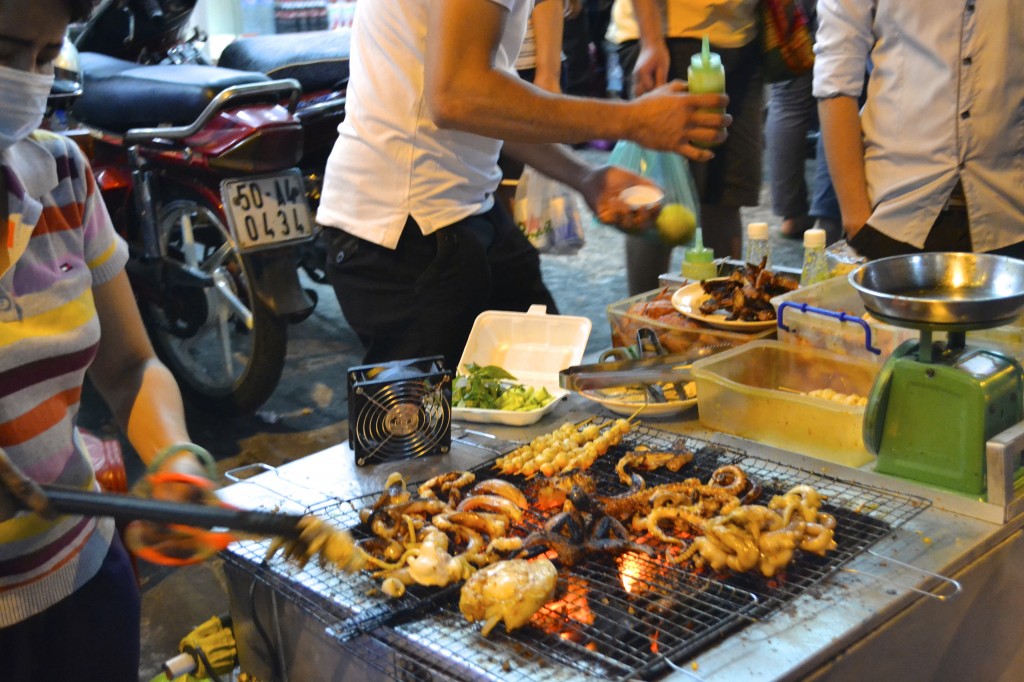 Overall, I really enjoyed Saigon. It was larger and more bustling than Hanoi, but in a different way. Hanoi was much grittier with smaller streets and crowded sidewalks, while Saigon felt much less compact. The one thing that surprised me about Saigon was the sheer amount of Western tourists. I know I stayed in the backpacker area, but compared to China there are so many foreigners! I never realized Vietnam was such a huge tourist destination until I visited this year. From what I’ve seen, Vietnam is the new Thailand. Warm weather, cheap food and lodging and unlimited activities, without the crazy sex, drugs and drinking culture that tourism has brought to Thailand.

I always thought of China as a popular tourist destination in Asia for foreigners, but in reality it’s nothing compared to Southeast Asia. Almost every foreign-looking person I meet in China is an expat or a student. I think this lack of tourism really has to do with the confusing, complicated and expensive (if you’re American) visa process. Also, a lot of people are turned off by China’s pollution, government and lack of English. It was almost a culture shock for me to see so many foreigners and hear so much English!

My advice for visiting Saigon: spend a day and get off the beaten path. Wander around the city and interact with the locals. There’s much more to Saigon than the tourist sites and backpacker areas, and while it’s tempting to spend your evenings getting drunk off of cheap red bull vodka buckets, use your time to explore the culture. Eat street food, spend a few hours wandering, and you’ll have an amazing experience.

Click on one of the photos below to open a slideshow:

Risking death to bring us our dinner

art sold on the street

making friends with a coconut seller, he let us all carry his load and it was so heavy! Of course we all bought coconuts afterwards

Art outside the pagoda

Selling durians: the worst-smelling fruit in the world

So many seafood options

The best dipping sauce ever

The aftermath of our appetizer

5 comments on “The City Saigon”