Part of the reason I was interested in moving to China in the first place was to experience a culture completely different from my own. I wanted to experience “culture shock” and challenge myself. I’ve been living in China for almost two years now, and I’m still constantly experiencing things that shock me, or just don’t make sense. Here is a collection of my crazy stories and cultural insights as I explore this mystifying nation. 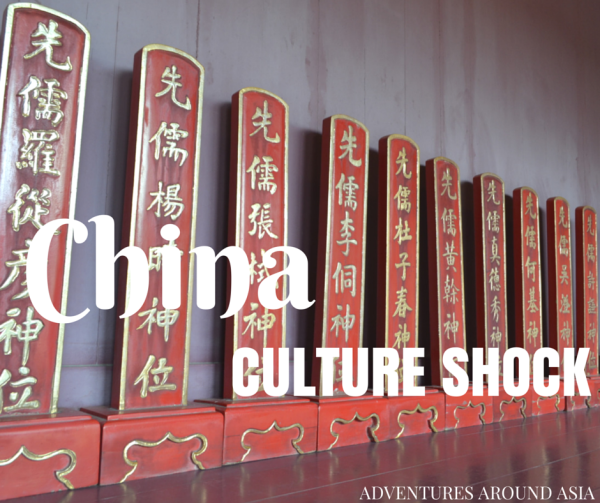 We all know the stereotypes about Asian drivers, and we’ve heard stories about the crazy traffic in China. I hate to make assumptions about people or cultures, so I always try to avoid doing that in China. Sure, Chinese traffic is crazy and driving is erratic, but it doesn’t mean Chinese people are bad drivers. I just means they’re a little more comfortable with aggressive driving… right?

Studying abroad, my only experience with driving in China was as a passenger in busses and taxis. Both taxi and bus drivers are professionals, so while I was sometimes scared to death, they always seemed to know what they were doing. I just assumed that all drivers in China were similarly aggressive, but under control.

I was wrong. I was very wrong. 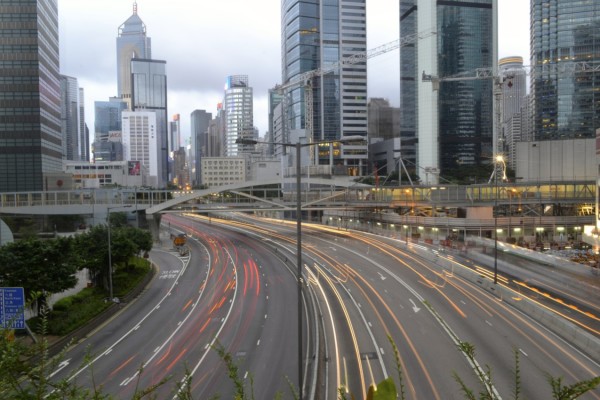 Sometimes I do fancy camera things

So…. the stereotypes are kind of true.

Last year I worked in a high school on the outskirts of Ningbo. My school often threw banquets and buffets off campus, and many teachers also invited me to their houses for dinner. I didn’t have a car, so I was usually driven by one of the other teachers. While some teachers were “okay” drivers by American standards, others made me fear for my life.

About 2/3 of the people who drive me in China seem nervous and uncomfortable whilst driving. I honestly feel like I’m being driven by a 15-year-old on a learners permit. I’ve even offered to help back the car around corners or into a parking space, because the driver is uncomfortable going backwards.

One time a few teachers and I were driving home from a banquet at night. I noticed we were going extremely slow on the highway road, probably about 10 mph under the speed limit. I felt a little uncomfortable because the street wasn’t lit very well, and I was afraid someone was going to rear-end us. About 10 minutes into the drive home, the teacher realized she had forgotten to turn on the headlights. So, not only were we going way under the speed limit, we also didn’t have our lights on. Whoopsies! 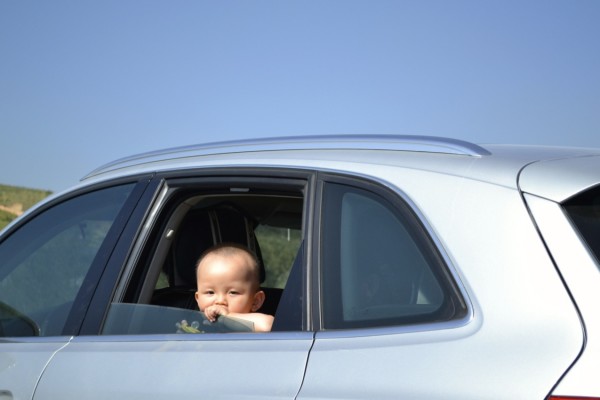 No car seats here, that’s what mom is for!

Just this last weekend I went to a barbecue with my new colleges at the English academy I teach at on Wednesdays. We dropped my classmate and colleague, Plum, off to buy a cake for the barbecue (it was someone’s birthday), and then spent a solid 10 minutes trying to put the car in a safe place to wait for her. We drove down the street and made a U-turn in front of oncoming traffic. When the driver realized that there were multiple cars coming in her direction, she screamed and let go of the wheel.

After our “incident”, a male colleague decided to try his hand at driving. Driving with him was like driving with my younger brother just after he got his license. Fast, jerky, and overly-confident would be the three words I would use to describe this kind of male teenage driving. The only difference? This man was not sixteen, he was twenty-eight. 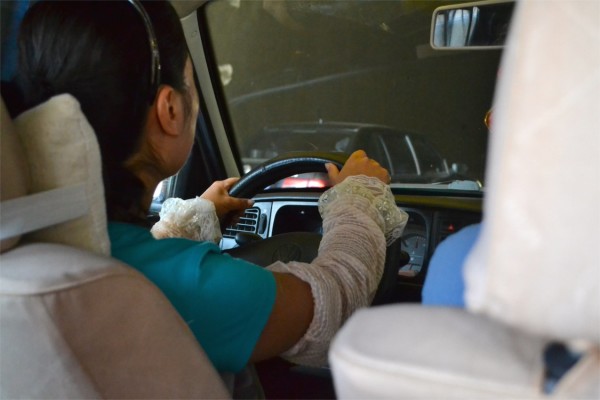 Be sure to cover your arms while driving so they don’t get tan!

Last year on of my English teacher friends taught a lesson on stereotypes to his students. He listed some common stereotypes Americans have about Chinese people. His list contained: extremely smart, good at math, kung fu ninjas, quiet and shy, and bad drivers. The students thought the lesson was hilarious and unanimously agreed that the only true stereotype was the one about horrible driving.

Why is the driving so bad?

In America, teenagers have a reputation for being bad drivers. But once the teenagers age and gain some experience, they morph into calm, safe drivers. Why isn’t this the same for Chinese people? A lot of the Chinese people I know with cars drive almost every day. Shouldn’t they be good drivers?

The only thing I can think of is that the Chinese DMV puts much more emphasis on the written potion of the driving test. The written test is extremely hard and many people fail multiple times. The skills portion is much more subjective, which Chinese people tend to avoid. You see the same thing with testing in schools. Rather than give oral presentations or actually learn how to speak oral English, the Chinese education system focuses on written tests. Because of this, many Chinese students learn English for 10 years, but can’t confidently speak one sentence after they graduate. 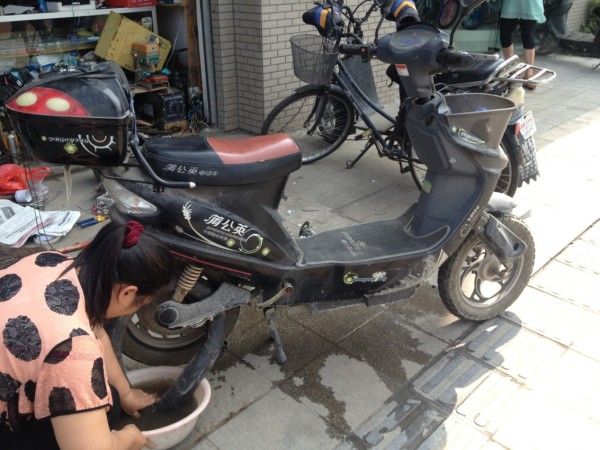 My e-bike getting a flat tire fixed

For those of you who didn’t know, I owned an e-bike, or electric motorbike, last year. If you think driving in a car is scary, try riding on an e-bike with no protection other than a shoddy helmet.

I think I’ve only ever honked my horn a total of four times in America. At home, I only honk in an emergency, or if I really need to merge on the freeway and someone isn’t paying attention. In China, I probably honk four times a minute.

Why do I have to honk that much? Because people don’t look. It’s horrible!! People change lanes without looking, make abrupt turns in front of you with no blinker, or stop in the middle of the road with no warning. The pedestrians are just as bad! They run out into the middle of the road without even looking to see if anyone is coming!! Any time I pass a person, car or another e-bike, I have to honk, just so they know I’m there. Otherwise I might get into an accident if someone isn’t paying attention. Oh wait, THAT ALREADY HAPPENED. 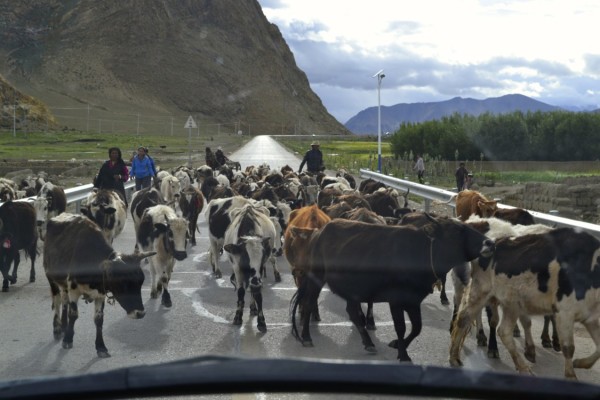 How do you handle cars or cows going the wrong way down the road? Honk. Loudly.

Traffic laws in China are basically nonexistent. People stop in the middle of the street with no warning, block intersections, drive on the sidewalk, perform dangerous u-turns and drive down the wrong side of the road towards oncoming traffic. E-bikes constantly run red lights, and have the audacity to honk at pedestrians that are crossing legally. Really? Really?! YOU HAVE A RED LIGHT.

Why? Because the traffic fines are too low. The maximum fine you can get for a traffic violation is 60 RMB, or $10 USD. TEN DOLLARS???! While 60 RMB is worth a little more in China than it is in the USA, it’s still way too low. In America, just a speeding ticket can cost you a few hundred dollars. Park illegally? You better be able to pay to get your car back from impound. Drive the wrong way down the road? Reckless driving? Illegal U-turns? Yeah, that’ll cost you. Imagine if the maximum traffic fine in  the USA was $60 USD? The roads would be a mess! 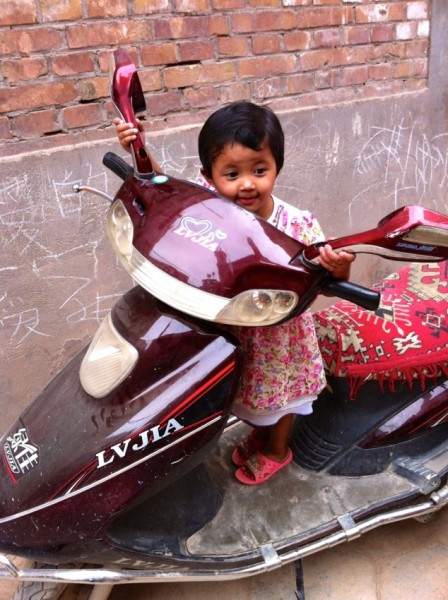 That’ll be a 60 RMB fine for driving without a license, miss.

China could easily solve all of its traffic problems by just raising the cost of the fines so that they are prohibitively expensive. Other countries have done it. In Vietnam, it’s illegal to ride a motorbike without a helmet. The cost is high enough that no one dares ride without one. Granted, most Vietnamese buy very light-weight helmets that probably won’t save you in an accident… but at least they’re wearing something?

I just don’t get it. Traffic fines can be a major source of revenue for the state. Why not use them? The only reason I can come up with is to keep the traffic police from giving out unnecessary fines to pocket money. Maybe 60 RMB isn’t worth their time? Something tells me this isn’t the case though. 60 RMB can buy a nice dinner for two in China. 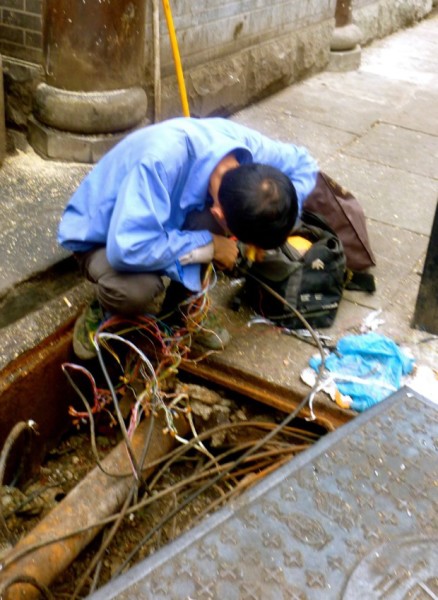 You are never safe. Not even on the sidewalk

What do you think? Why is the traffic in China so horrible??! I’ve been living here for almost two years and I still can’t figure it out!