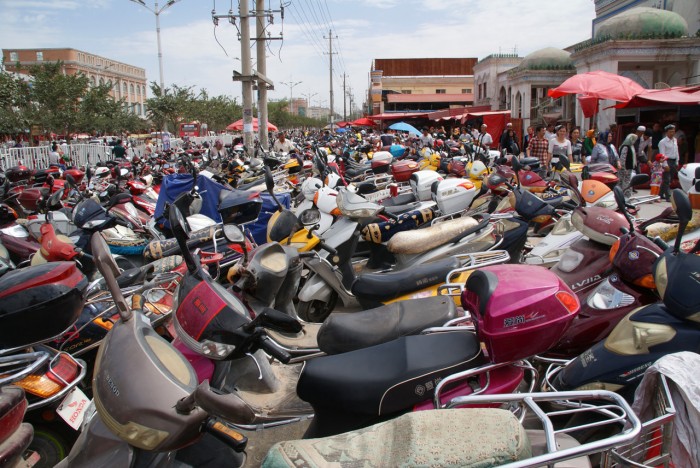 As many of you may know, earlier this year I borrowed an e-bike, or electric motorcycle, from one of the teachers at my school. I haven’t explored as much as I would like since it’s been so cold, but now that the weather is warming up I’ve been taking it all over my rural area. I can’t take it all the way into the city and back because I’m afraid the battery won’t last, but it’s very convenient for a quick trip to the bank or pharmacy.

My main long-distance e-bike excursions are to Auchan, the local grocery store. While Auchan isn’t that far away, there is no direct bus route from my school, forcing me to take two busses and travel over an hour. The other option is a taxi, but I would rather not have shell out money every time I want to go grocery shopping, which tends to be every other week. Getting back from Auchan with my groceries intact is always an adventure, and I have to make sure everything fits into my backpack and front basket (otherwise I have to hold it between my feet!). 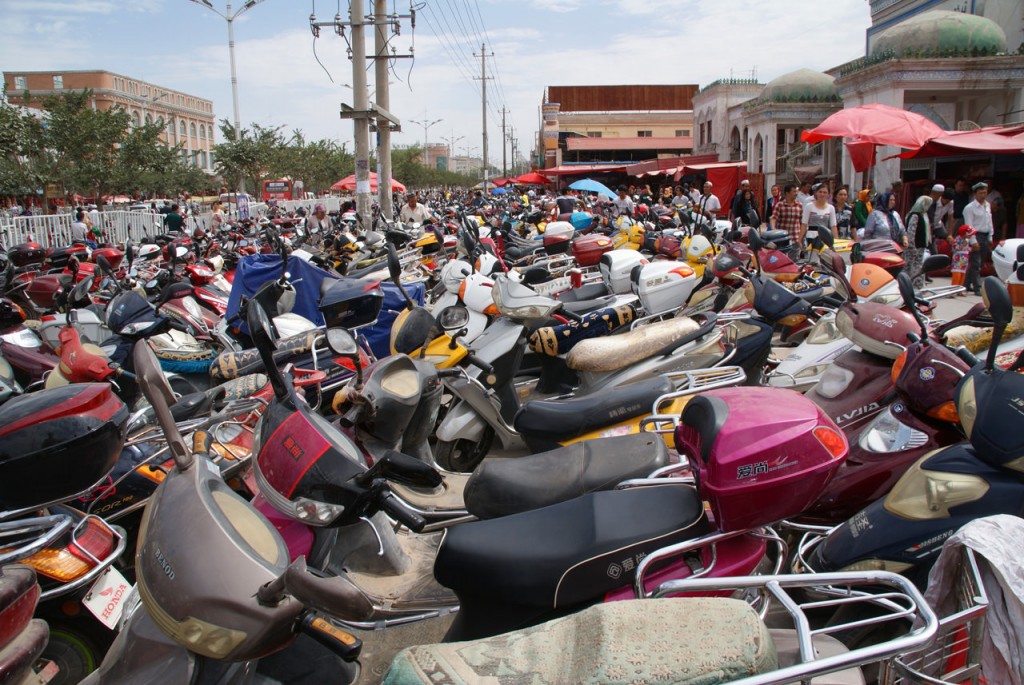 My e-bike kind of looks like these (photo by popupcity.net)

The main problem with riding an e-bike is that driving in China is insane. People make sharp, unexpected turns without blinkers, randomly stop in the middle of traffic and pretty much act invincible. Pedestrians aren’t much better; I can’t tell you how many times people have walked out in front of my ebike without even looking! Every day I see and hear multiple traffic accidents, and no one follows any of the traffic laws because the fine is less than $10! I bought a good helmet, which makes me feel much safer, but the crazy drivers, borderline suicidal pedestrians and horrible potholes make riding my ebike a nerve-wrecking experience.

The “New City” where Auchan is located, is perfect for riding an e-bike. There are wide bike lanes and newly paved streets with little traffic. However, once I start nearing my school, the roads become impossible. In between the “New City” and my factory highway are roughly 6-8 blocks of thin pot-hole strewn streets with no bike lanes. Cars whiz by and honk while pedestrians dart out in front of traffic. Ningbo is also building a few subway stops in this area so there is also a lot of construction.

Fast forward to last Saturday. I was riding my e-bike to the grocery store when all of a sudden it started raining. Uh Oh! I had never really ridden my e-bike in the rain before, so I drove carefully and eventually made it to the grocery store. On the way back it was still lightly raining, so I put my complimentary e-bike poncho on over myself and the front of my e-bike and headed home. Riding through the “New City” was a piece of cake. It wasn’t raining very hard and the roads were pretty much empty; however, when I got to the thinner streets near my school, I noticed there was a lot of mud on the roads and drove slowly.

A few blocks in, a young man walked right in front of my e-bike, causing me to jam on my breaks and slide a little on the muddy pavement. With my heart racing in my chest after my near-death experience (his death? my death? both of our deaths?), I continued on. A few seconds later I reached a river where there is a small overpass with a somewhat steep incline. That’s when it happened: my back wheel completely lost its grip on the muddy pavement and my ebike slid out from under me, throwing me off and into the mud.

What. Just. Happened? I was lying in the mud, my body throbbing, while trucks honked at me as they drove around my e-bike. I got up, shaking, covered in mud, standing in my now ripped giant poncho dress. I was in shock. Did that just happen? I looked down at my ankle and I could see a big red bloody scrape covered in mud. I shuffled over to my e-bike and lifted it up, which was much easier said than done. Those things are heavy! I stood to the side of the road and assessed the damage. The e-bike was fine aside from a few scratches, my poncho was ripped slightly and I was covered in mud, but other than my ankle and bruised leg I felt okay. 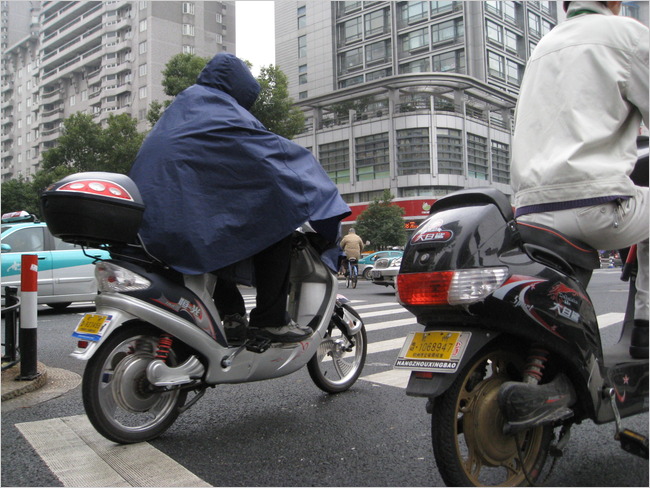 E-bike with a rain poncho (photo by peoplesbike.com)

The main thing that bothered me was that roughly 20 people saw me wipe out and literally no one came to help me. No one. Three or four people even rode past me on bicycles and stared as they slowly pedaled past. Really?! Had I wiped out in America at least three or four people would have run to me asking if I was okay, while helping me get my ebike out of the street while the rest of the crowd would have looked on with concern, not wanting to overwhelm me with too many people.

But in China I was met with blank stares as I attempted to drag my ebike, which is probably heavier than me, out of the street while trucks and fellow e-bikers honked at me. I was shaking and teary-eyed, covered in a thick grey mud and obviously needing assistance but no one came to help me. What if I seriously injured myself and wasn’t able to get up? Would I have laid in the street for hours?

The interesting thing was that this reaction has nothing to do with the fact that I’m foreign. The onlookers probably had no idea I was a foreigner until I lifted up the visor to my helmet. This reaction, or lack of reaction, is typical in China, but only if you are injured. Chinese people can be the most helpful people in the entire world in ordinary circumstances. A week ago I was trying to find a store that sold China Mobile credit for my phone and a stranger offered to walk me a solid 5 minutes out of his way rather than give me verbal directions. But god forbid you’re injured and need help: you’re on your own.

About two and a half years ago a video emerged of a little two-year-old girl getting run over by a car while playing in an alleyway street. The car stopped briefly, and then ran over her again with it’s back wheel. Over a dozen people walked and biked right past her as she bled out in the street and was run over again. Eventually a woman ran to help her but it was already too late.

This video went viral in China, causing Chinese people to question: why did no one help? What’s wrong with us? You can watch a censored version of the video here; they blur the image of the girl and don’t actually show the van running over her. If you want to see the complete uncensored version broadcast on Chinese television you can find it online, but speaking from personal experience I don’t recommend you watch it unless you want to feel sick for the rest of the day. They show her reaching up with her little arms to people passing by, who refuse to even look at her. It’s literally heart breaking.

The main reason people give for this lack of a response to injury is that there is a culture of fear associated with personal injury. Chinese people are afraid to help those in medical accidents because they’re afraid of being liable. There have been a few instances where strangers have been forced to pay medical bills and ambulance fees because the injured person doesn’t have money on them. There have also been many cases of extortion where people will cause accidents or elderly people will fall on purpose and demand compensation from those that help them for “causing the accident”. This has created a pervasive fear of helping anyone in need.

The rest of the way home I was in pain; physical pain from my fall and emotional pain of having no one offer to help me. When I arrived at the school a few of the kitchen ladies saw me limping back to the dorm with my muddy yoga pants rolled up my thighs while I held one of my shoes in my hands. “Ayaa! Are you okay?!! What happened?!!”, they gasped. “I fell of my e-bike. I’m okay I just cut myself.” They walked with me back to the teachers dorm fussing over me in my muddy state. Even though I don’t really know these women aside from the fact that they may have served me lunch a few times, I’m not a stranger to them, so they went out of their way to help me in my injured state. A completely different reaction than the blank stares I received earlier.

Once back in my room I washed the mud off me in the shower and went to the task of cleaning all my cuts and scrapes. Overall I wasn’t that hurt save for a very bruised leg where the ebike fell on me, a bruised butt and no skin on my ankle. It definitely could have been worse. I would say thank god I was wearing a helmet, but I didn’t actually touch my head to the ground or anything (I checked for mud and scratches).

The next day I went to visit the University of Nottingham for their student applicant day (I’ll tell you more about it in another post) and I had an Indonesian student tour guide who also has an e-bike. When I told him about my fall, he said: “Let me guess, no one helped you right?”. He hit the nail on the head without me even prompting. While this isn’t meant to be an insult to Chinese people, who like I mentioned, can be some of the nicest people around, it is something worth mentioning.

Has anyone else ever had this experience? What do you think about this fear of being a good samaritan?

4 comments on “The Ebike Accident: Adding Insult to Injury”