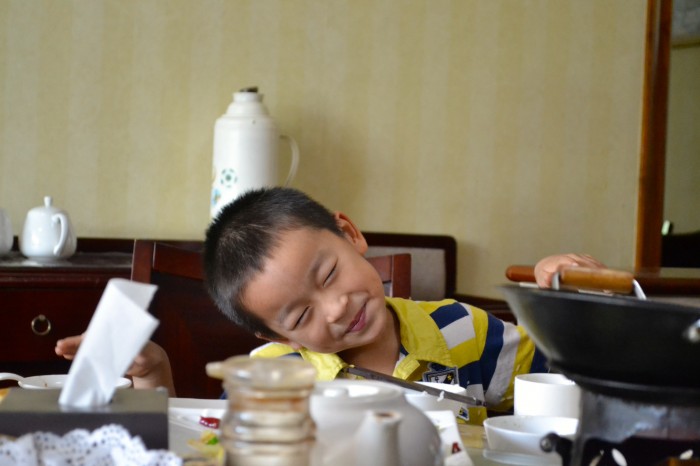 Once back from Tianjin, I met up with Will to visit his English school. While teaching English in Xi’an was a giant failure, Will’s school was looking for a morning teacher and I had nothing to do in the mornings while Mark was at work and Will was in class. I met up with Will around 5:00 and we took a taxi to the school. The school is about a twenty minutes away from BLCU by cab, and located on a side street near a KFC. We wandered into the building, up the stairs past a China Construction Bank. There were two English schools on the floor right next to each other, which I found to be somewhat interesting. I figured I may as well get a job teaching English, since it is technically legal because I was given a 60-day business visa. Why on this earth was I given a business visa when I applied for a tourist visa? No one knows.

Will introduced me to Pulin Cambridge English School, which is part of a chain of Cambridge English Schools across China. For the next three weeks I would be teaching phonics, speaking and listening, and helping children prepare for a speech competition. After drafting me a schedule, I waited for a few hours while Will taught his classes, and the group of us went to dinner around 10pm. The school took us to an amazing Sichuan restaurant. I can’t even remember the last time I had food that good.

The owners of the school go by Joseph and Iris. At first I thought they were married, but apparently they’re just business partners. If I were to guess, I would say Joseph is in his 40’s and Iris is in her late 30’s. Joseph has an extremely bubbly personality, but his English is a bit lacking, so I mainly speak to him in Chinese or Chinglish. Iris is very touchy-feely and calls all of the kids her babies. At first I thought one of the little girls was her own daughter, but then I realized that the social standards for touching children in China are much different than in the US. It is completely acceptable for teachers to hug and kiss children and baby them to death. Iris is also very touchy-feely with me. She constantly tries to hold my hand, which I find extremely awkward, especially since she laces her fingers with mine- something that I would only do with someone I am dating. I have constantly been trying to come up with ways to avoid her holding my hand, such as making sure I am always carrying something in both of my hands. She also likes to hug me and kiss me on the cheek multiple times a day. Apparently, she’s a little less touchy with Will, which makes sense.

Aside from Joseph and Iris, there are three young English teachers at the school: Clara, Helen and Mina. Mina only works in the morning and never went out to eat with us in the three weeks I worked at the school, but she always seemed very friendly. Clara is a very typical girly Chinese girl. She wears cutesy clothing and seems much younger than she actually is. Finally, Helen is a typical Shanghai girl. She always wears high wasted shorts and dyes her hair and eyebrows an auburn color. She doesn’t talk a lot, and is constantly texting, but she’s also the only teacher that really disciplines the kids.

Teaching English to little kids is a pretty interesting experience. I took to calling them my “xiao fengzi”, or “little crazies”. While the kids were so incredibly cute, there were definitely moments I wanted to take one child and hit the others with him or her. Getting them to behave was a major feat, especially since it’s summertime, and no one wants to be in school. I thought they might all be tired and well-behaved, if not quiet in the morning. I have never been so wrong. It’s a constant:

“Amy, put your dress down”

“Jared, sit in your seat”

“Oliver, Jerry, stop hitting each other”

and the only response I get is “ting bu dong”, or “I don’t understand”.

At some points I felt like I really got through to the kids, and at other points I was definitely a glorified English-speaking babysitter.

All of the kids I taught were between the ages of 4 and 12. My favorite was probably a 6 year-old girl named Amy. She was a little bit crazy, and every time she saw me, she would click at me or meow. She and a few other students who stay for the afternoon session would always come to lunch with us after class. One day, she took her spoon and dipped it into her boiling hot water- filled teacup. She then went to sip the water out of the spoon. Immediately, she made a face and spit the water all over her plate. She then started licking the water off of the plate while meowing. This continued until the food arrived.

One of the most interesting aspects of working at the English school, was the fact that the teachers weren’t quite fluent in English. They would mainly teach the kids English in Chinese. This became a problem when the kids were preparing for the speech contest. Iris asked me to edit a speech for her, and after reading it, I thought one of the kids wrote it. Apparently, the kids wrote the speeches in Chinese and the teachers translated the speeches into English with embellishments. I was shocked. The grammar and writing style was extremely poor. Iris eventually had me edit every single speech, which was actually fun for me. However, she insisted on re-typing up my corrections. Normally this would be nice, but she would always miss at least 1/3 of the corrections. There were some essays that I literally edited 5 times, changing the same exact problems over and over. While some essays weren’t very bad, others I completely re-wrote from scratch. Some of the mistakes were hilarious such as “It helps me to exercise my body”. Other times, the essays were so cute I let the kids keep things in that I would normally take out:

“My favorite food is fruit pizza”- she meant a fruit tarte

“I think this makes me very fashionable. I’m a cute girl. Don’t you think so?”

“and now I have a task to educate the little black”

I wouldn’t change that sentence for the world.