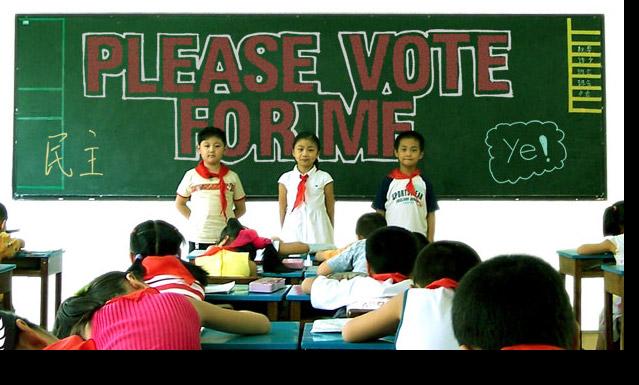 Curious about whether or not democracy would work in China? Why not test it out on Chinese children?! In the documentary “Please Vote for Me”, a real election in staged with third graders at a Chinese primary school.

I originally watched “Please Vote for Me” in my undergraduate Chinese Culture through Film class. The whole class was roaring with laughter throughout the film, especially those of us who had been to China. I recently watched the documentary again today and I found it even more hilarious after having taught English at a primary school for almost a year. Anyone who is interested in the Chinese education system, Chinese home life culture, or democracy in China should definitely check this documentary out (it’s on Netflix!).

The proven 7-step system to help you break out of the status quo and finally move abroad! 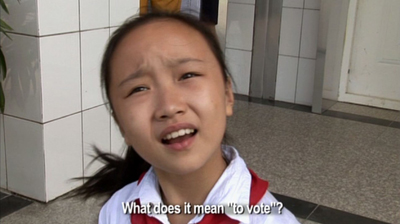 The documentary follows three students who are chosen by their teacher to run: Luo Lei, Xu Xiaofei, and Chung Chung. Luo Lei, the current class monitor, is an athletic, opinionated boy who is known for “beating his classmates”. Xiaofei, on the other hand, is a sweet and sensitive girl, later labeled a “crybaby”. Finally, Chung Chung is an extremely charismatic, chubby troublemaker who laughs maniacally  when he gets his way, and cries when he thinks he will lose.

The cameras document the detailed political conversations these 3rd grades have with one another, and even follow the students home to show the interactions they have with their families. The camera follows Luo Lei’s father offering to buy off the class with a free field trip, Chung Chung’s mother heckling him as he performs speeches in his underwear and Xiaofei’s mother lamenting that her daughter doesn’t have a chance to win because she comes from a single-parent household.

This film is part of the Why Democracy Series and was aired in 35 countries including the BBC and PBS networks.

While democracy can be corrupt anywhere, it is interesting to see it so blatantly expressed and encouraged. School elections in America often have strict rules: no offering presents for votes and definitely no heckling or bullying candidates! However this election is much more similar to many democratic elections in the real world today. The children make false promises to one another, hold each other accountable for past actions and point out flaws in one another’s character (which the teacher allows). They also have debates where they are allowed to scream at and demean one another while the other students interject their own opinions (once again, with no intervention from the teacher). 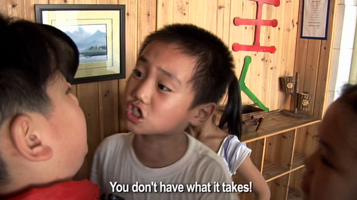 I think the intensity of this election is very representative of Chinese culture. “Didn’t you want to be like President Hu Jintao?”, Chung Chung’s mother asks, “This is your first step”. The parents are extremely involved in the election. They write speeches for their children, prepare them for debate topics, help them learn to defend their character, and force them to practice their “talent” for hours on end. The parents even encourage their children to heckle one another with names and bribe each other with gifts. The only reasonable parent seems to be Xiaofei’s mother, who believes she can’t be overly involved in the election because Xiaofei must learn to be self-sufficient. 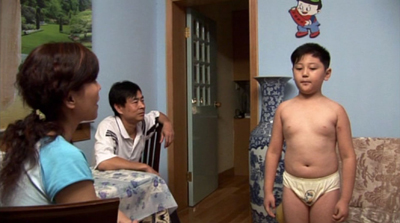 Chung Chung practices his speech in his underwear (truefilms.com)

Throughout the film you wonder: “Will they make the right choice?”.  Will they pick the person who will best support them, or will they be bribed with gifts or swayed by charisma?

In the end I’m left thinking: what does their choice say about Chinese culture and democracy as a whole? Would it have been better to let the teacher decide? I’m not quite so sure these children learned anything besides the corrupt nature of democracy. But on the other hand, they may be better behaved towards the new class monitor because, after all, it was their choice.

If you’re at all interested in Chinese culture, teaching English in China, or international political culture, “Please Vote for Me” is a great documentary to watch. Just be prepared for a lot of laughs (and a lot of subtitles).

If you don’t have a Netflix account you can also find the entire film on Youtube, with somewhat lesser visual and sound quality.

Have you seen this documentary? What do you think?

10 comments on ““Please Vote for Me”: Democracy in China”