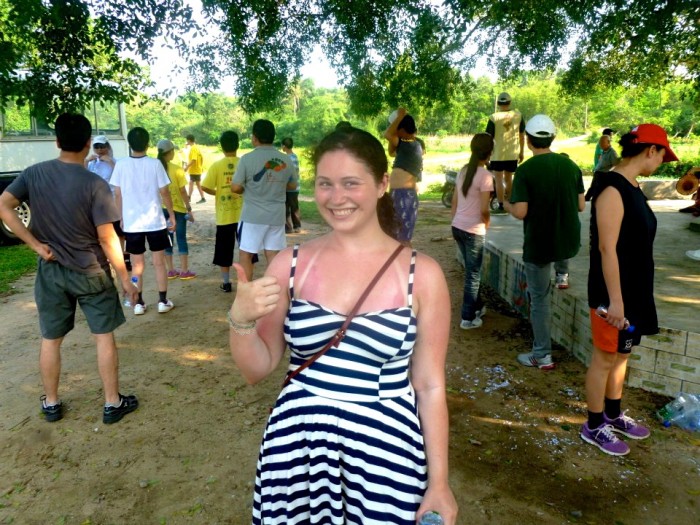 This is the craziest story I have from my 7 months in China, so get ready.

In case you haven’t read the earlier posts, I spent my first few days of Spring Break in Hong Kong and Macau and then enjoyed the remainder of the week on the tropical island of Hainan.

It was our last full day in Hainan and I wanted to do something a bit different. I have realized over the years, that I can only spend so much time laying out on a beach, so I scoured the wall of activities in our hostel for something to do. Finally, I found it: Hash Harriers Jungle Tour! The ad said that we could either walk or run a 6k in the jungle in Hainan where we would see forest, farms and villages; we would then have a large feast with all you can drink beer. I was excited about seeing small villages and meeting locals, Nate and Will were excited about the unlimited beer, so the three of us decided to seek out this Hash Harriers event.

The next morning the girls went to the beach, while the boys and I wandered the city, waiting to embark on our tour. As I mentioned in my last post, Volcanos and Sunburns in the Hawaii of China, I was extremely sunburnt because, wouldn’t you know, China doesn’t have sunscreen. While most of my sunburn faded, I had two spots on either side of my chest near my shoulders that were extremely painful. It was physically impossible for me to wear a bra, so I was forced to wear the only thing in my suitcase that could be worn without one: a striped cotton dress. While I didn’t know it at the time, these two spots would develop into a second degree sunburn. Now we can add skin cancer to the list of cancers I may or may not receive from China! Anyway, I decided to wear the dress because it was the only thing I could wear, and I paired it with walking sandals because tennis shoes would have looked ridiculous. Why do my fashion choices matter? I would call this foreshadowing, but the title kind of gives it away.

The boys and I spent the morning wandering around Haikou, where we saw a market with everything and anything for sale, but mainly we just died in the oppressive heat.

Eventually it was time for us to meet at the Hash House: a bar owned by the same people.  “This has got to be owned by Australians or something”, I thought on the way to the bar. Running in the jungle, calling something a “Hash Run” AND they own a bar? Besides, all the photos showed at least a few westerners in every shot.

The three of us were the first to arrive at the Hash House, where we paid for our excursion and waited for everyone else to arrive. We were wrong about it being Western owned, but we were there for an adventure, and were excited about the prospect of making some Chinese friends for the day.

One by one everyone began to arrive and there was a problem: everyone was in running gear, and by running gear I mean full-on marathon running clothing. Uh-oh. But we had already paid and there was no time for me to go back to the hostel and change! Whoops.

Eventually we boarded the bus and I was freaking out. We were told by a 50 year-old chinese woman sitting near us not to worry, and that she definitely wouldn’t be running; I was also slightly reassured by the young couple sitting in front of us wearing jeans. They were the only other newbies, and also seemed slightly surprised by the running gear as well.

After an hour or so, we turned onto a dirt road full of bumps and pot holes, and drove past a farm into a small courtyard area. We exited the bus and everyone began stretching. I followed along with the interesting Chinese stretches, feeling absolutely ridiculous in my dress and sandals. Eventually Nate asked if anyone had a shirt I could throw on over my dress, and one of the kindest men in all of China grabbed a shirt out of his trunk and gave it to me. It was basically like wearing a second dress, but at least I didn’t have to worry about my chest falling out. The shirt was spectacular: a navy blue breathable material, it had a skull made of beer bottles and the phrase “time to get wasted with the head hunters”.

one of the most awkward moments of my life

Eventually, we learned that the “hash” were pieces of confetti paper that were sprinkled around the countryside in piles so that we would know which way to run. If we didn’t know which way to go, the runners who were ahead would split up, find the “hash” and then wait for the stragglers so that we could continue on together. We also learned that we’d be running “roughly an 8k”. Awesome.

After listening and attempting to understand the directions and rules, we were off! With the sound of a horn we all started running into the jungle, including me in my dress and sandals, with a water bottle in one hand and a camera in the other.

For hours we ran through the jungle, past random villages and farms. Nate ran ahead while Will and I stayed towards the back of the pack. Hey! For sandals and I dress I think I did pretty well. All the villagers who saw Will and I running together with a pack of Chinese people in racing clothes were doubled over in laughter. At least I brightened someone’s day.

Towards the end of our 8k, Will and I, along with a few stragglers, lost the rest of the group. We wandered around a random village trying to find the “hash”, and wasted a good twenty minutes. Eventually we found it, and the stragglers all ran ahead of us! Thinking we were the last of the group to finish, Will and I ran at an all-out sprint once we saw the finish line. All of the hash runners waved their beers and screamed “JAI YOU JAI YOU!!!” as we sprinted towards the finish. At the finish line we were immediately handed a beer. To our surprise, we weren’t the last to finish; the last couple came jogging in about a forty-five minutes later.

To punish the couple for coming in last, the group had them sit on bags of ice while wearing dunce caps, ridiculed them, and then had them chug a cup of beer. Will, Nate and I, having no clue what was going on, laughed and took pictures. Then the group turned to us: apparently all the newcomers needed to be initiated. They led us over and made us sit on the bags of ice, which were leaking all down our legs. It was SO COLD. They then handed us cups of beer and one of the leaders told us a story. It took him about three tries for us to understand, but here is our interpretation of what it was:

“In France, if a woman is pregnant on the subway, people will stand up and offer her their seat; however, in China, the subway is so crowded that she’ll give birth to the baby because the crowd pushes it right out!!!”. This was accompanied by lots of wild hand motions. After the story, we were told to chug the beer. Gan bei!

After hazing the newbie couple in jeans, we all loaded back onto the rickety bus for dinner. It was about time since the sun was starting to set and mosquitos were eating us alive. I was a little worried since central Hainan is a malaria zone. Whoops.

On the bus ride to dinner, all the Chinese patrons started singing songs. Since Nate, Will and I couldn’t contribute, we listened along… until we were asked to sing Christmas carols! We sang Jingle Bells and Rudolph the Red Nose Reindeer among others. Nate was mad because he’s Jewish. I found it highly entertaining that everyone on the bus either hummed or made up English-eque words which they mumbled along to the song.

After singing a few Christmas carols, one man on the bus proclaimed that everyone knew a song in English that they could sing for us. Excited, the three of us urged them to sing- and the song went as follows:

Yep. I couldn’t make that up even if I tried.

Eventually we made it to the restaurant, where people fought over who would sit at our table. We dined on many random Chinese dishes, and our hosts kept us busy with “gan bei!” after “gan bei!” of beer toasts.  Nate accidentally ate a helping of blood tofu, which apparently “isn’t that bad”. I’ll give you my opinion once I force myself to try it. The man who had given me the shirt to borrow was sitting at our table, and I offered to return it to him. He told me that it was a gift- and that is how I received my favorite souvenir in China. Granted, I probably wouldn’t want it back either after the amount I had sweat in it.

As we were finishing up dinner and getting ready to leave, a table in the back corner forced one of the women to stand on her chair because it was her birthday. The whole room burst into song:

And THAT, my friends, is my craziest and most favorite story from my seven months in China.

*some of these photos have been stolen from Will Kilgore

2 comments on “That One Time I Accidentally Ran a Chinese 8k in the Jungle While Wearing a Dress.”